Bahamas at last. Motor boat ride all the way.

It’s Saturday morning and we are here in the Bahamas at last.   We are anchored in a little harbor on the western side of Chub Cay,  an island in the Berry Island chain, about 40 miles northwest of Nassau.  It’s a beautiful cove with clear water.  It’s great to be here, finally.

We left Ft. Lauderdale on Thursday afternoon and headed out into the Atlantic and Gulf Stream headed over to the Bahamas.  The conditions were very benign with calm seas and only a light wind on the nose.  I would have preferred to sail and avoid 19 hours of motoring but it’s hard to get good sailing conditions that aren’t a a bit too exciting for Brenda.  Further, we would have likely had to wait a week or more to find an opportunity to cross with favorable winds.  Given those options, we bolted.  Good choice as here we are.

Last year, we were able to sail and it turned out to be a bit much for our first run to the Bahamas with fairly rough conditions and certainly more than Brenda had signed up for.   We had too much wind much of the time and were hit with a number of thunderstorms overnight.  Not great.  So, this year I promised her that we would try for an easy crossing and that’s what we got.

In crossing the Gulf Stream, you have to compensate for the current that pushes you north by steering toward a point south of where you want to end up and let the current sweep you north.   That point is calculated based on how much time you expect to be in the gulf stream and then estimating the average speed of the current.   So, I calculated a spot and adjusted our compass heading and off we went.

“So, what happened, where did you end up when you exited the Gulf Stream?”  Thanks for asking.  Actually, we came out within a 1 ½ miles of where I had hoped, just about perfect.  And, that’s after running about 8 hours and about 50 miles.  Pretty good, I think, actually.  At the center of the stream the current was pushing us north at about 5 knots.  That’s a huge amount of water moving north.

After crossing the stream, we entered the Grand Bahama Bank around 9 pm on Thursday.  It’s pretty amazing to be running along and see the depth go from about 2,500 ft deep to 25 in less than a mile which is what happens as you enter the banks.  So, after crossing onto the banks, we headed the rest of the way overnight in water that varied from 25’ to  15’ deep, typical depth for much of the Bahamas.  The water is so clear that you can easily see the bottom much of the time.   The moon was half full so the night was bright.  However, once it set, the stars were out in full splendor.  With no city light around you could see many more stars than what you’d normally enjoy.

We were also treated to a wonderful sunset and sunsets are typically pretty amazing here in the Bahamas, as we crossed the gulf stream.   Of course, we were out of sight of land so to see water all around you and these amazing clouds was a treat.

A very important event for us, especially for Brenda, was to spread her father’s ashes in the Gulf Stream.  Brenda’s father died three years ago this May and it was his wish that his ashes be spread out on the ocean.   Jack, Brenda’s father, loved the sea but he really didn’t like cold weather so it was very fitting that Brenda released his ashes in 80 degree water on such a beautiful day.  Brenda wrote a very touching post that says more than I can say about this special moment.

On a more pedestrian note, along the way we spied many Portuguese Man-of-War jellyfish.  These are very unique jellyfish are about 6″ long and float along with a “sail” that pokes above the water.   I am unaware of any other jellyfish quite like these.   As pretty as they are “don’t touch” is the word as they are quite venomous.  The “business end” is below the surface with yards of poisonous filaments that catch small fish and other little creatures that the MOW feed on.  Even washed up on the beach, to touch one of these will cause a nasty sting.  Here’s what they look like drifting along.  Quite pretty actually, like a translucent bubble. 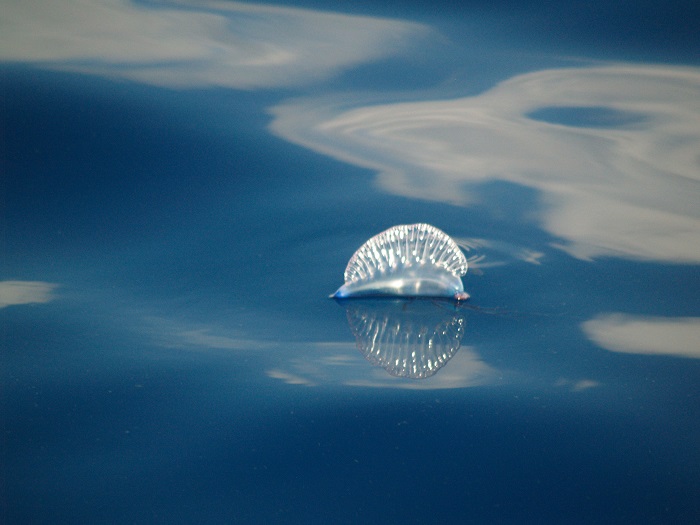 The entire run from Ft. Lauderdale to here at Chub took about 19 hours and Brenda and took turns keeping watch as we motored along.  We took turns throughout the night but there wasn’t much to watch for as we didn’t pass a single boat overnight once we were on the banks.

We checked into customs in Chub.  I took our dink ashore to a local marina where I retrieved the paperwork.  After filling it out I got a ride in an old pickup truck to the airport where I met with the customs and immigration officers.   To call it an airport is different than what we have in the US.  The “terminal” was a very small building on a single runway.   There is no control tower and the terminal is just for customs.  No snack shop or Starbucks here.  The process of clearing in was pretty straight forward but did involve lots of forms and plenty of loud “stamping” with ink pads and official looking seals.   $300 later we had our cruising and fishing permits and our three month visas and I went back to the marina with my “guide” Dave, a local Bahamian.  Pretty simple actually.   I should also mention that the airport has only one paved strip and its only long enough for small planes to land.  While I was there a great looking float plane landed.  The owner came in to clear customs too and then flew out again to head to his own private island in the Exumas, about 75 miles south.  We have visited near his island, Over Yonder Cay.  A pretty wealthy guy I’d say.

Last evening as Brenda and I were sitting up on Pandora’s fore-deck enjoying  an “adult beverage”, a gin and tonic, actually, a small boat with two Bahamas fisherman motored up to sell freshly caught lobsters and conch.   The Bahamas lobsters are very similar to our Maine lobsters, but without the big claws and conch are a really big snail. 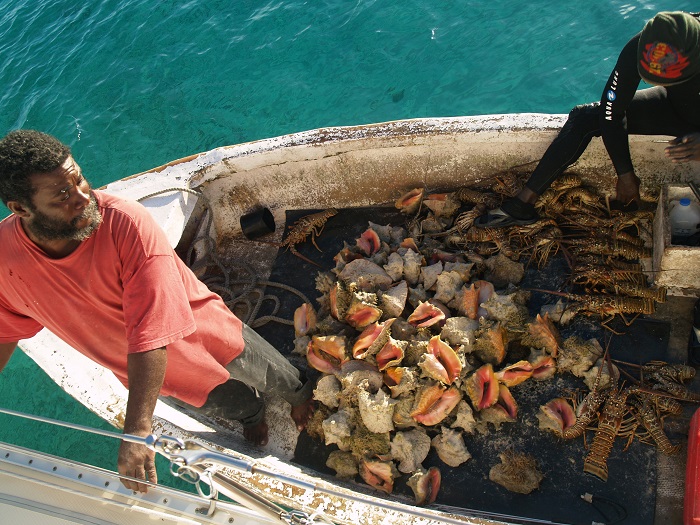 The fisherman stay out for weeks at a time and live on a somewhat larger boat while fishing during the day.   They catch lobster and chonch buy diving down in the clear water to find their catch on the bottom in the clear water.   They don’t use air tanks, just free dive down to grab their prey.  Believe me when I say that this is hard work.    Pretty tough guys.   We were happy to buy three lobsters and baked them for dinner.  They were delicous.

Having not gotten much sleep the prior night during our crossing, Brenda and I crashed early.  We were plenty tired.

Well, we’re finally here and the weather is terrific.  Our plan today is to visit the BATELCO (Bahamas Telephone) office today and sign up for a Bahamas cell phone to use for the time we are here.   Land lines are not used here and everyone has cell phones.  In many ways, the service here is better than in the US.  We will also get a chip for our i-pad so we can receive and send e-mail.

Oh yea, as I was finishing up this post we had a mild rain squall that lasted all of 10 minutes.  The squall featured a neat little funnel cloud, sort of like a miniature tornado but over water.

They are generally harmless.   The rainbow left behind after the squall lasted longer than the rain. 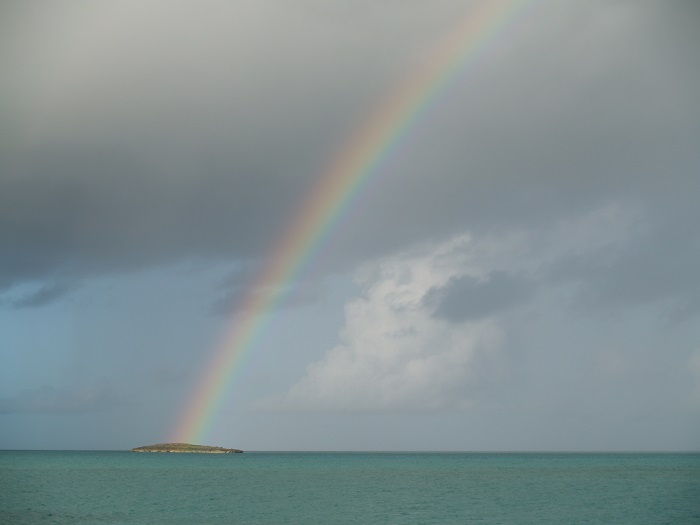 Perhaps we should head over to that island to retrieve our pot of gold.  If you believe that I have a bridge to sell you.

4 responses to “Bahamas at last. Motor boat ride all the way.”