>From New Bedford to Rockland

As I write this we are about 40 miles out from the Cape Cod Canal. It’s a beautiful day with tremendous visibility. Yesterday, Friday we left from New Bedford and headed out. Unfortunately, the weather was really awful with a massive line of thunder storms headed our way. By 3pm we were nearly off of the tip of Cape Cod, Provincetown, MA with following seas building and about 30 knots of wind dead astearn, an uncomfortable and somewhat precarious point of sail under those conditions. The forecast called for more storms overnight so we decided to duck into Provincetown Harbor and wait for better weather on Saturday. This proved to be a good idea as the seas would have surely been worse the further off shore we got.

Provincetown was as crazy as ever, a mix of families with strollers and guys in loin cloth’s, and nothing else, hawking their latest review. After some debate my delivery crew, Rodney, Burt and I opted for a seafood dinner instead of the “all naked male review” show. Sorry, no pictures of that, or the other wacky sights of Provincetown. 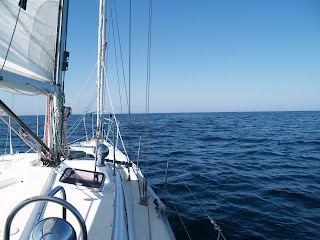 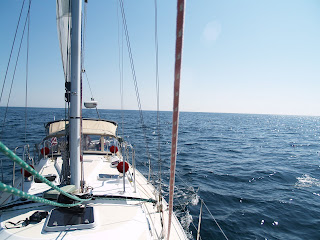 What a difference a day makes. We left at first light and dropped the mooring at 05:30. Just after we cleared the end of the Cape, we spotted two large whales, probably finback basedon their size, spouting a few miles off. What a sight. I hope to see more as the day progresses. There is a very moderate wind but it’s just about on our nose so we are motoring with the mainsail up and making about 7kts over the bottom helped by a 1kt current as the boat speed is about 6.2kts. (A knot is about 1.1 statute mile per hour). Our course to Rockland Maine will place us over Stellwagen Bank, an area with a very large population of whales. On past trips, this is probably my 13th crossing, we have seen many whales and some have surfaced within a few hundred feet of the boat. It’s best to stay away from them but sometimes they come over to check us out and it’s amazing just how large they are.

The computer says that we will be arriving in Rockland in about 19 hours which means that we will make our final approach in the dark and arrive as the sky just begins to brighten. I’d prefer to make landfall a bit later as there are a lot of obstructions along the way as we get closer inshore. However, with the radar and chart plotter we should be fine. It can’t be any worse than approaching in dense fog, something that I have done many times. 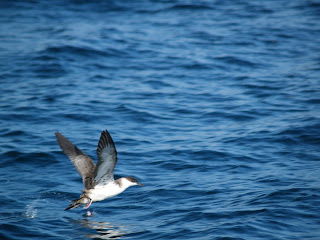 Here’s a shot of a Shearwater, one of the species of birds that live offshore all the time and only go ashore to bear their young. They are a fairly large bird with a wingspan greater than the largest shoreside gulls. Alas, no more wales for this crossing.