>As I sit here, it’s only a short time till Pandora is back in the water and, based on a post on the Yahoo, SAGA list serve, I thought it would be interesting to revisit the question of why we purchased a SAGA 43 several years ago.  One of my first posts, back in 2007 addressed that very issue and I have listed our original assumptions below as well as the post from 2007 to see how these thoughts have stood up over the years.

When I initially called a boat broker about upgrading from our Tartan 37, my wife Brenda and I had a few key characteristics that our new boat absolutely had to have.  Here they are.

This is what I wrote in my post back in 2007 about why a SAGA 43.   I wrote…
As I mentioned previously, we decided that we needed a new boat when we were anchored in Gilkey Harbor, Isleboro Maine in August of 2006. We saw a nearly new Tartan 41 and I decided to introduce ourselves to the owners. They invited us aboard for a cocktail and told us about their Summer plans, to cruise for about two to three months in Maine. At that moment, I realized that was what I wanted to to someday. What better way to look toward the future than to get our ideal cruising boat now. By early September we were working with Pat Clark of Boat Works in Rowayton CT. She proved to be very knowledgeable about many designs and their characteristics and recommended a number of boat designs for us to consider. However, having looked at a large number of designs over the year I was immediately taken by the SAGA configuration when she introduced it to me. Bob Perry, the designer, also was the father of the Valiant 42, considered by many as one of the finest cruising boats ever built. So, I was fairly confident that we had found a design that would fit the bill. I did a fair amount of research and read all that I could find on the Web. One review in particular caught my eye from a publication called 48 North.  What I read there told me immediately that I had found the boat that I wanted.
The SAGA 43 was conceived as performance cruiser, just what I was looking for. I wanted a boat with good pedigree that was also fast and comfortable, with more creature comforts than we had with our Tartan 37. We looked in Annapolis at what would eventually become our boat within a month, and now just one year ago at the Annapolis Show. We decided immediately that we wanted to purchase “Spirit” and put in a bid the next week. With delays on the seller ‘s side it wasn’t until February of this year that we finally closed on the boat and got started on the upgrades we planned to do prior to launching. We upgraded the electronics to include a Raymarine e-series radar plotter, new canvas and some additional weight in the keel. We knew that many of the earlier SAGAs were quite tender, a combination of their narrow beam and a bit under weight in the keel in the shoal draft verson. We ordered a 1,200lb “shoe” from Mars Metals in Ontario and had it installed.  It went on perfectly and I looked like it was part of the original keel from the very beginning. Having that extra 1,200 lbs proved to be just the trick as Keith Reynolds (the patron saint of SAGAs) predicted. Now she is plenty stiff and able to carry sail as needed. Yes, she does heel over a bit but no more than our T37 did. With these modifications we were off and running as of mid April and ready for our summer “trials”.
So, how is it going as I sit here in May of 2011?  I put that question to Brenda (who doesn’t mince words about sailing and is very clear that she is happy in her role aboard Pandora as “the honored guest”) and here’s what she had to say.
“It’s not the Ritz Carlton, and there’s no room service but it’s way better than camping”.   Well, she did say that but also went on to say the following.
“It’s the most comfortable boat that we have ever had, (note that we began sailing together nearly 40 years ago and had a succession of boats beginning with a 20′ catboat and just prior to Pandora, a Tartan 37 ) sailing is a lot less tiring and we arrive with energy left for shore leave”.  The boat is still somewhat tender and even though we are healing the motion is easy and I am not holding on for dear life.  And, this is a major difference compared to our other boats, including our Tartan 37 where I was always exhausted after a long day on the water. “
I should note that since getting Pandora we have spent progressively more time aboard with a total of 6 weeks last summer and plans to top that by a few weeks this year.  This time aboard will include two months in Maine, a trip that we have made for over 15 summers.

So, is Pandora right for me, an avid sailor, and Brenda, a somewhat reluctant but nearly always willing “honored guest”?  It would seem that it is.

For us, after 40 years of sailing together, Pandora is about the perfect boat and I can’t imagine another boat that would fit the bill better for us.
And, as a friend of mine once said, “that’s my report and I’m sticking to it”. 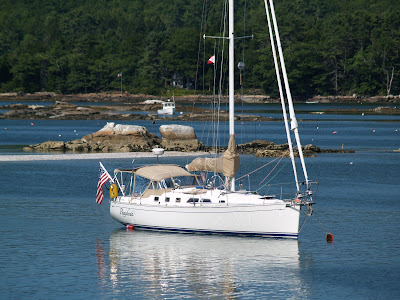 Oh, I almost forgot, I hate to do a post without a photo so I guess that I will have to sign off with a shot of Pandora secure on a mooring in Muscongus Bay Maine back in 2008.