The Dawg Days of Antigua are nearly upon us.

It’s Wednesday afternoon and I am here in Antigua, anxiously awaiting the arrival of the “fleet” of Dawgs heading our way.   I  flew in yesterday afternoon, and I am here to say that flying is a lot simpler, and faster, than getting here by boat.  However, I’ll have to leave here to fly home after only a week.  That’s such a bummer, let me tell you.

The harbor is nearly empty with only a smattering of small boats here.  Our good friends, and live aboard couple, Bill and Maureen on Kalunamoo, arrived a few days ago from Trinidad, where they spent the summer, out of hurricane harm’s way.  It’s good to see them but I am sad that our paths won’t cross again until next year, perhaps in the summer. 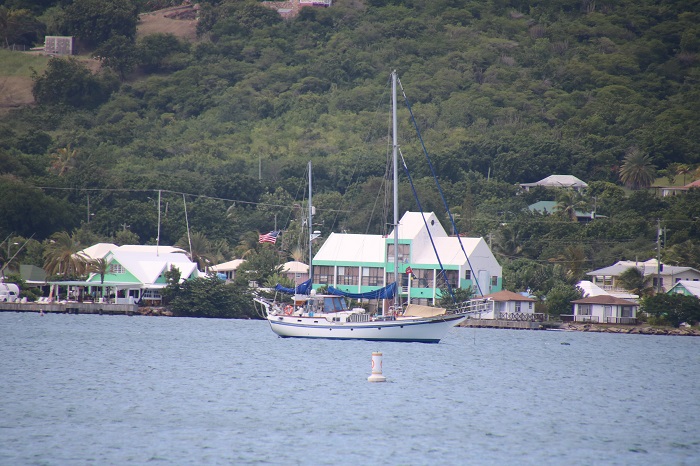 However, spars or not, there is plenty of tonnage here, made possible by Anna a 365′ behemoth, recently launched in the Netherlands, the largest yacht ever built there.  There’s only a handful of yachts in the world that are larger.  And she’s owned by, you guessed it, a Russian,  Dimitri Rybololev and she cost an astounding $250m to build.

That sounds like a lot but it’s really not all that much when you consider that he has an estimated worth of $7 billion.  That’s 7,000 millions!   What’s even more amazing is that he still has that much money after settling with his ex for a whopping $4.5 billion divorce settlement awarded to her buy a Swiss court.  But don’t worry about Dimitri because the award was later reduced to a piddling $600 million after the couple settled amicably.  Isn’t that sweet?  Me, I’d be pretty amicable if I got $600 million. 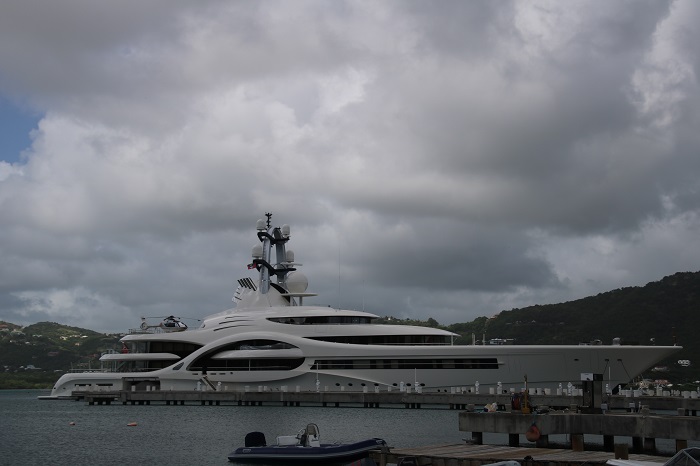 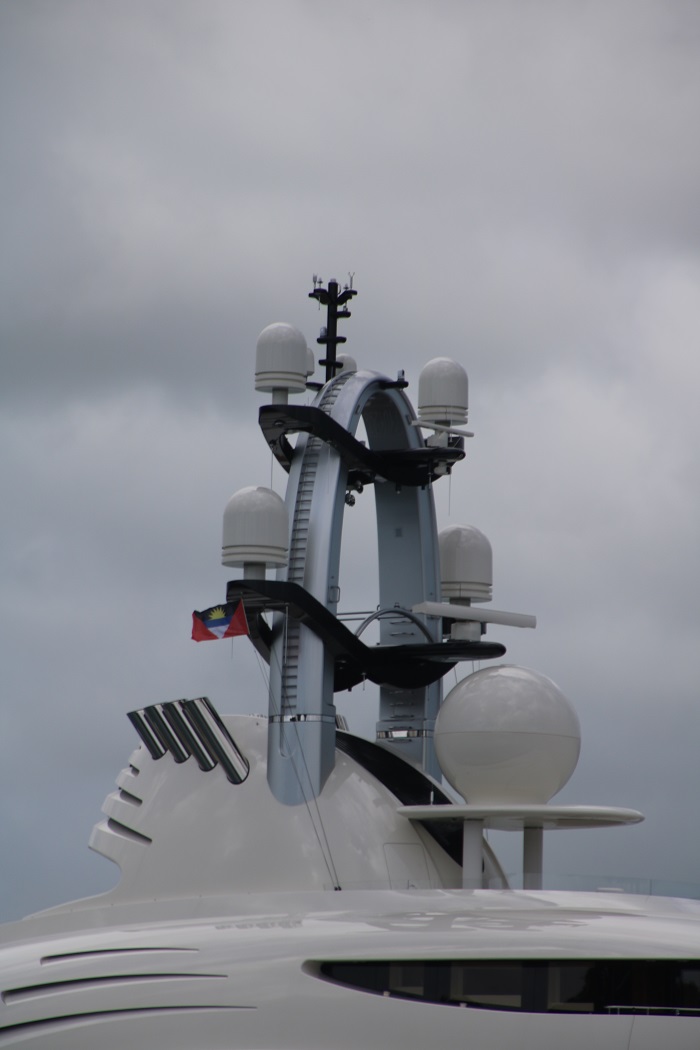 Including her own chopper.  You can be pretty confident that you have plenty of funds available if you have one of these on board. 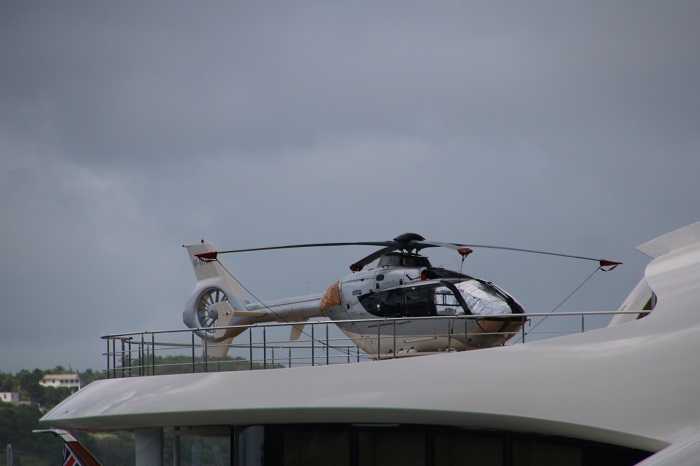 Of course, having two “garages” to keep your tenders makes a pretty clear statement as well. 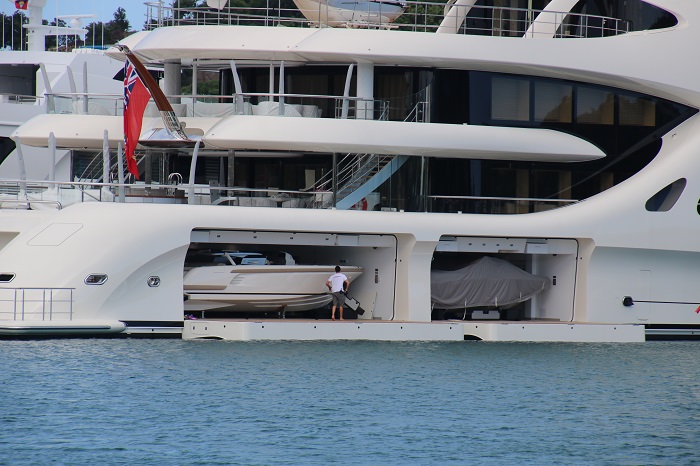 You can really tell how big she is compared to one of the crew up forward.  And, this guy is only one of 30 that work aboard full time.  Quite the payroll.   Need to know more in case you are thinking about having one built for yourself?  Check this link to get the skinny. 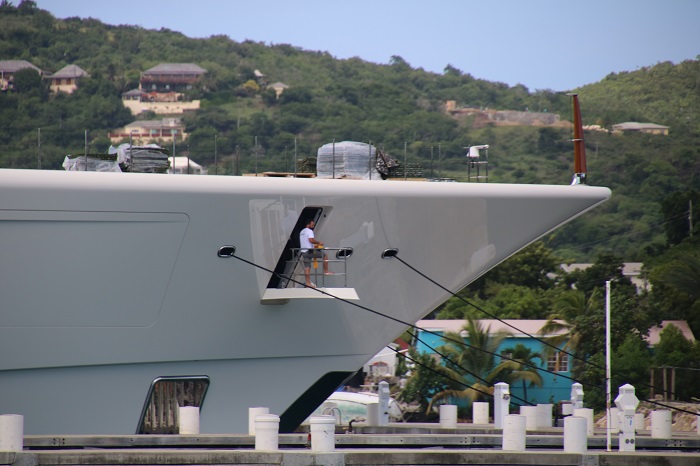 Dimitri is a smart guy naming his new boat after one of his daughters as she won’t be divorcing him any time soon.    I expect is pretty good friends with Putin.

And, speaking of Putin who also seems to be pretty fond of our president, I was struck by this sign at the Skullduggery bar in Falmouth, promoting a special rum drink.  At $5EC, it’s quite a deal as that’s only $2 US.  Thanks Mr President. 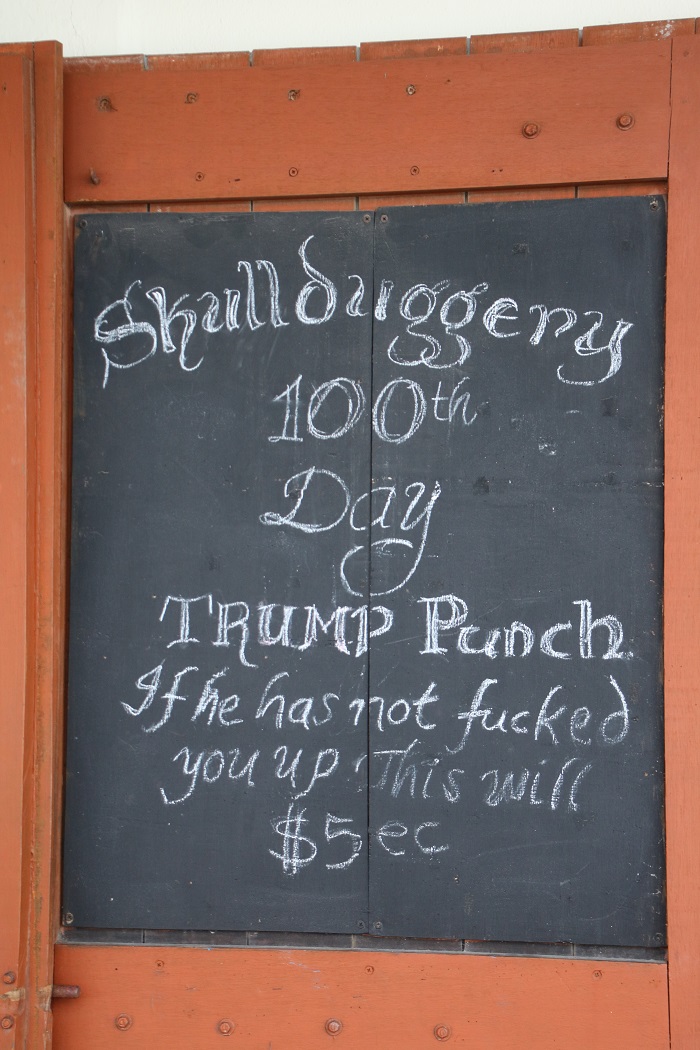 If you disagree, don’t blame me, I’m only reporting.

As far as the Salty Dawg Rally is concerned,and that’s why I am here in Antigua, the 40 or so boats that are headed my way, in spite of delays caused by a really bad run of adverse winds, should begin arriving over the next few days.

I expect that more than a few of them will be happy to have a Trump Punch.  At $2US it’s about the best deal in town.

Of course, that will only be the beginning as we have plenty of fun events planned to help welcome the fleet to Antigua now through Thanksgiving.

One way or the other, Antigua is about to really go to the Dawgs and I am looking forward to that too.

One response to “The Dawg Days of Antigua are nearly upon us.”