It’s always about the weather

Last weekend I hosted an event, a Gam, for the Seven Seas Cruising Association (SSCA) for the 6th year.  The event took place over a two day period and was a success, even if attendance was down a bit.  It’s a big job to put on an event, big crowd or not and I have to say that as the date approached I thought “I am NEVER doing this again”.

However, as the “curtain went up” and I looked out over all the folks in the audience, my position softened a bit.  A 7th in 2019?  Hmm…

In the run-up to the event had made a big deal out of the planned USCG chopper search and rescue (SAR) demonstration that was to happen on the river and was sad to have it canceled at the very last minute because of bad weather.

In “real life” the USCG goes out in terrible weather but for what is in essence a training exercise, they are more circumspect on considering the risk.  I’ll admit that Saturday’s weather wasn’t ideal, with a lot of haze and a very low cloud ceiling.  Oh well, there’s always next year.  I think that the captain of the chopper felt as badly as I did as I was when she called me to share the bad news as she was keenly aware of how long I had worked on getting approval.  It had taken THREE YEARS.  At least I am persistent.   Next year, the fourth..  Wait!  I thought that “three was the charm”.  Oh well.

Fortunately, Ginger and Peter of SV Irene came to our rescue to fill in the agenda.  Ginger presented to us about their trip in the summer of 2016 through the North West Passage.  Thank God for global warming and their successful trip or I don’t know what I would have done to fill the void.  “Hey everybody, listen up, let me show you all the great shadow puppet characters I know.  This is a bat, watch it fly away…”

Anyway, chopper or not, they did bring a rescue boat and gave tours.  The crew even stayed for lunch, flack jackets and all.   It was fun and they made a big hit.  Folks lined up at the dock for a peek aboard. 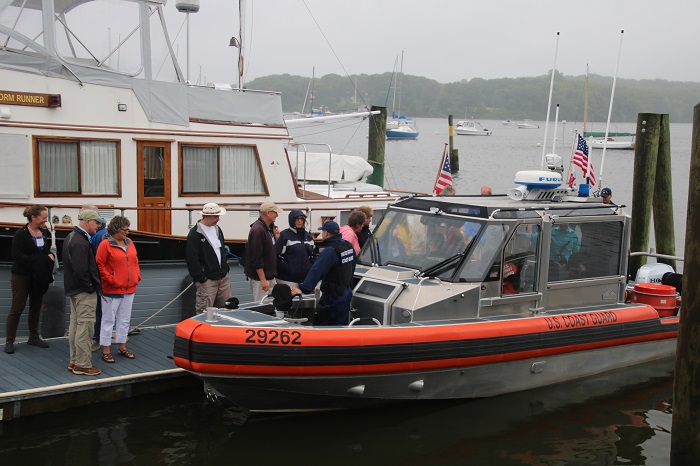 I’d be thrilled to be rescued by these guys but it wouldn’t be so great to be boarded if I had something to hide.  “Sir, just how much rum do you have aboard?” He looks like he’s all business.  “But officer, all of these cases are just ships stores and for personal consumption. Really!” “Yeah, sure, over the next 100 years. Can I see your documentation and passport please?” 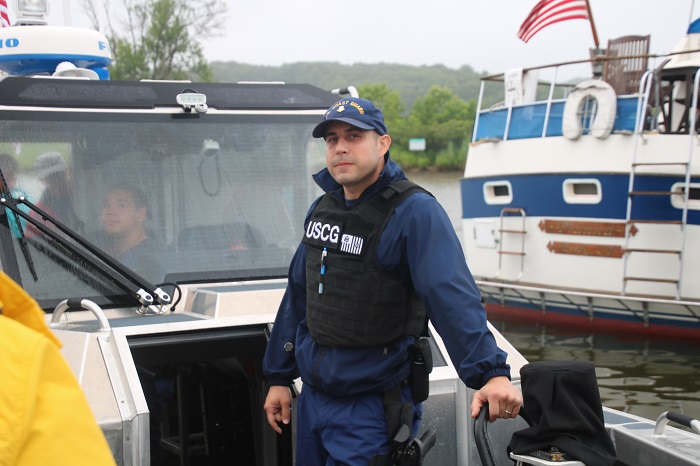 Every aspect of these boats are designed for tough conditions.  And, blasting along at 45kts in rough conditions, these seats would come in very handy.  “Pick me! I want to go for ride!  I’ll even post photos on Facebook and write a blog post about it.  I promise! 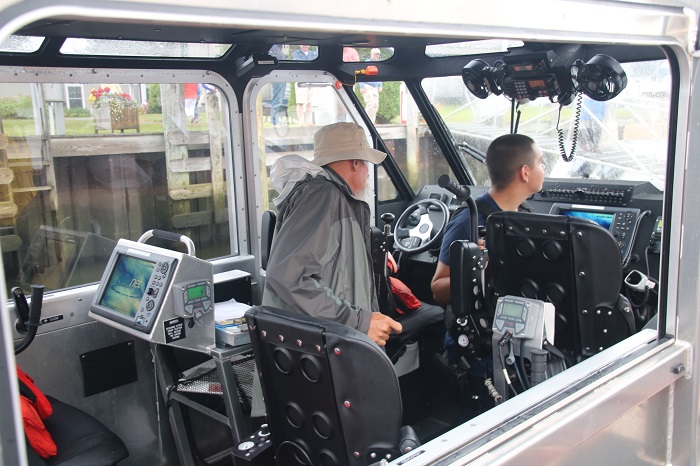 On Friday night, for the “early birds” Brenda and I hosted a get-together aboard Pandora.  We had a fun crowd aboard.   They filled the cockpit and then some. 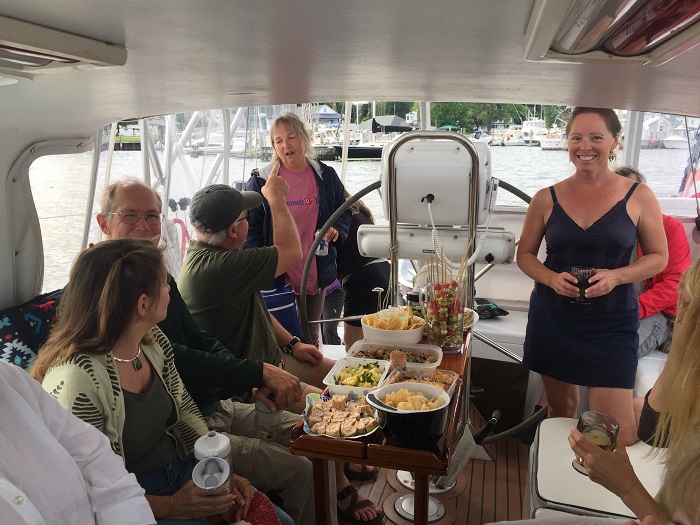 Some sat down below.   There was plenty of food to go around. 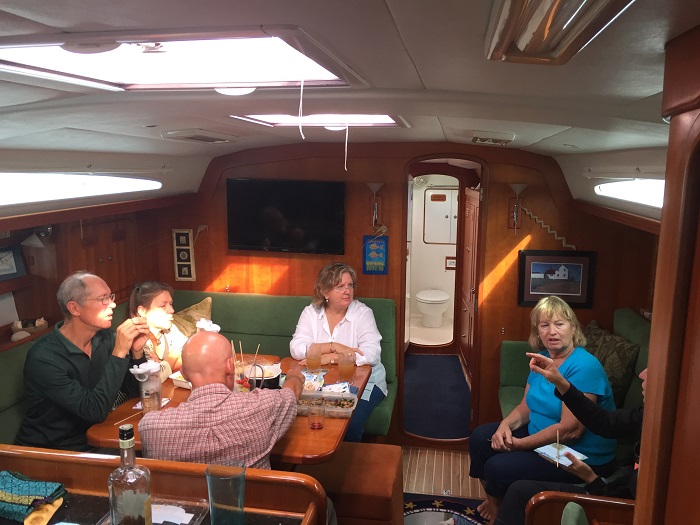 Many arrived in their “private launches”.    I guess they sent their crew home early except the poor guy who was hugging Pandora’s transom.   “Hey, you, crew guy, Stay in the launch.  Buffy and Charles aren’t ready to leave just yet.” 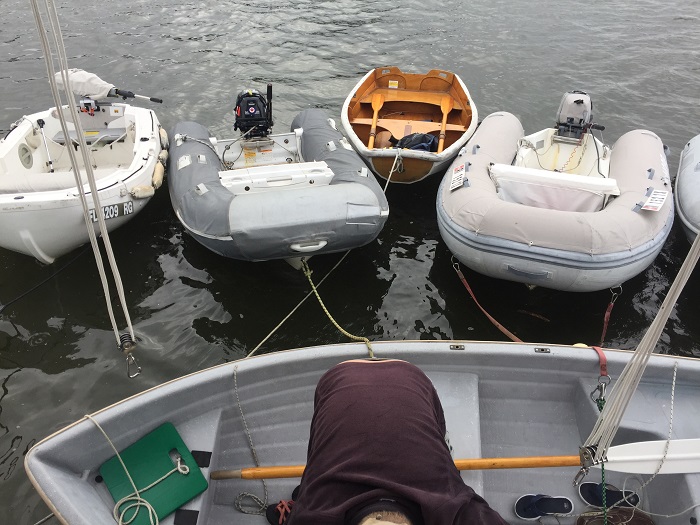 I wonder if anyone noticed Brenda’s most recent addition to Pandora’s decor?  The rug pays homage to our roots as catboat sailors.    Alas, just like every boat we’ve ever had, nothing quite fits.   It’s lovely, never the less. 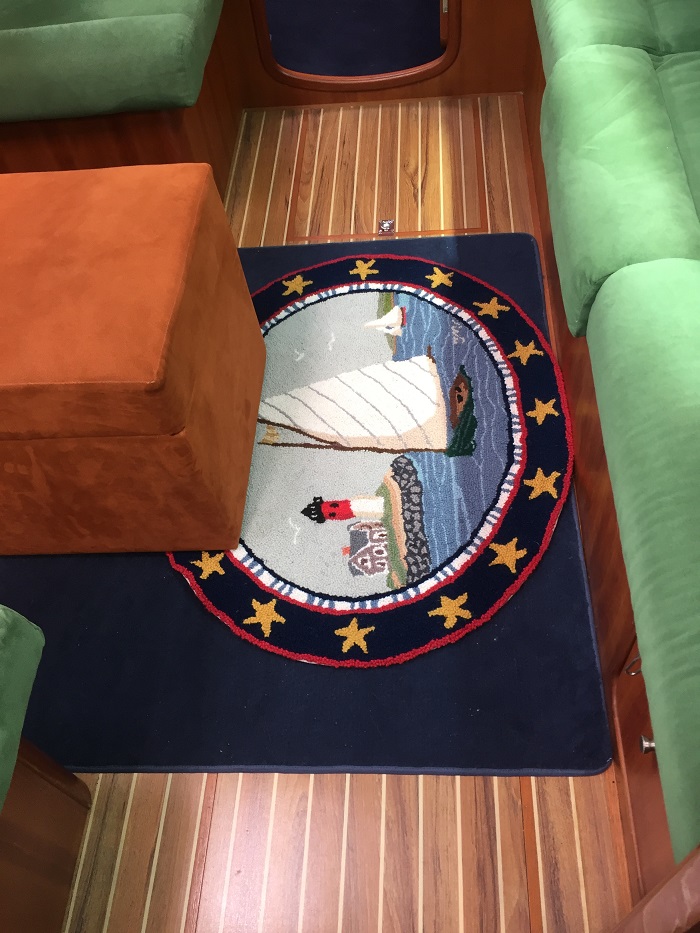 So, the weekend was a big success and we had fun.  After it was over my event partner George was just happy to sit and relax.   Everybody loves George, especially his canine buddies.  “Can I have a cookie Dad!  Please?”  Does this guy look mellow or what? 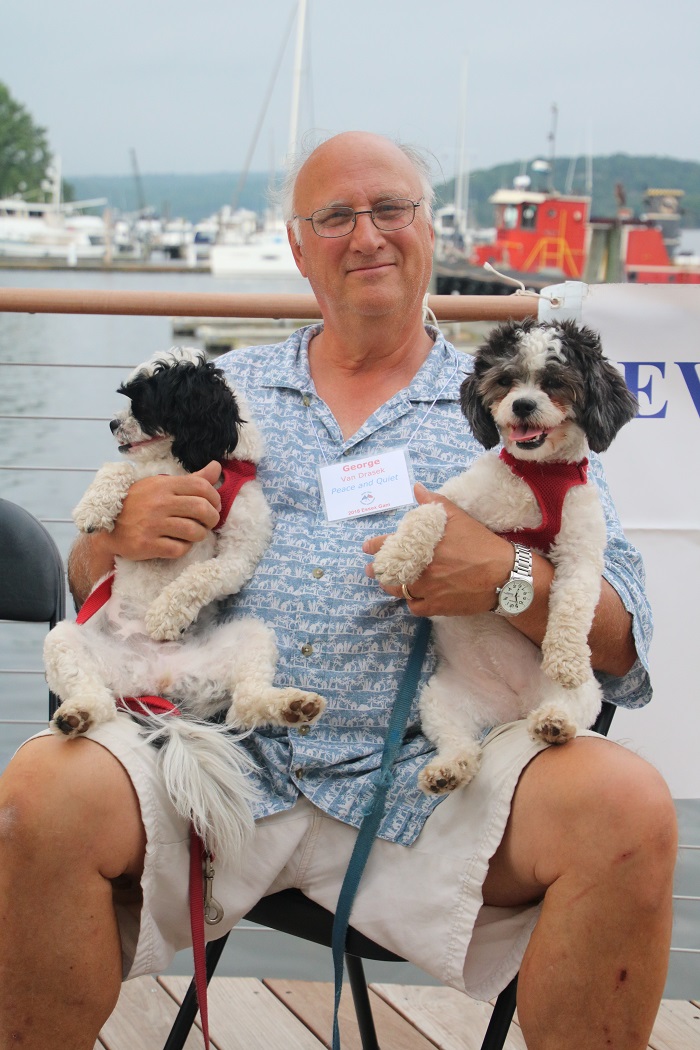 There you have it, the 6th annual Summer Solstice Gam has come and gone along with the weather that kept the USCG Calvary from showing us their SAR stuff.  Such is the boating life where somehow it’s always about the weather.  Better luck next year.  Yes, me and the dog, ever hopeful.  Perhaps 4 will be the charm.

And speaking of the 4th, it’s Saturday and the 4th of July is just around the corner.  Hey, here’s an idea?  Let’s go hang out on the river?

Yes, that’s the plan.  Just us hanging out with thousands of our closest friends.

“Thanks for the wake buddy!”

It is summer, after all.

4 responses to “It’s always about the weather”