Atalante and the spirit of tradition.

It’s been a real treat being here in Antigua during the Classic Yacht Regatta as there are so many magnificent yachts.  In my last post I mentioned that the Tot Club met aboard a classic schooner, the beautiful Ashanti.

That evening I also met the owner of a much more modern yacht, the recently launched Atalante.   The next day I was fortunate to get a personal tour of the boat by here owner.   Atalante was built in the Netherlands at the Classen shipyard.  This yard is known for a remarkable level of craftsmanship and even though the local waters are very shallow, they still find a way to turn out really massive superyachts.

Atalante, draws her name from Greek mythology. Legend has it that she was abandoned and left to die by her mother, who wanted a son, and was raised by a she-bear.   I am always interested in how an owner chooses a name for their boat and am particularly interested in names with a mythological origin as my wife and sailing partner was a classics major so we tend to be drawn to such things.  Our own boat Pandora’s name, and her dink Hope, are steeped in mythology.    Aboard Atalante is a lovely stylized sculpture of her namesake and her “mother”. 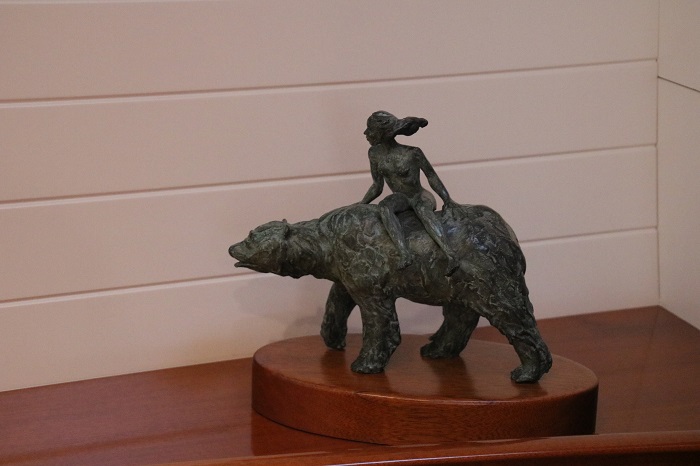 She has a graceful and classic sheer to her deck. 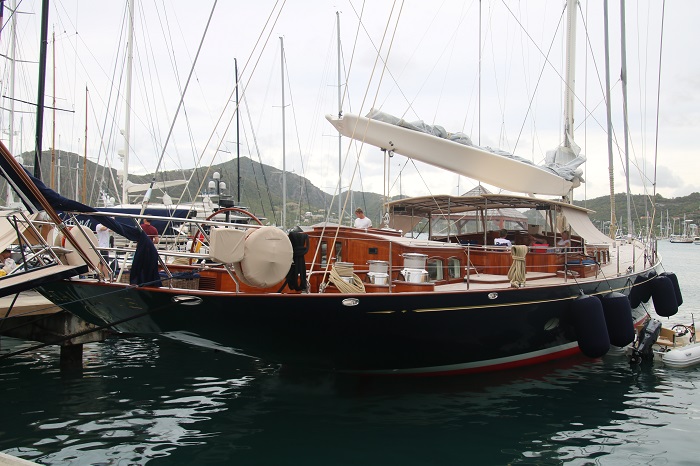 A fore-deck that goes on and on. 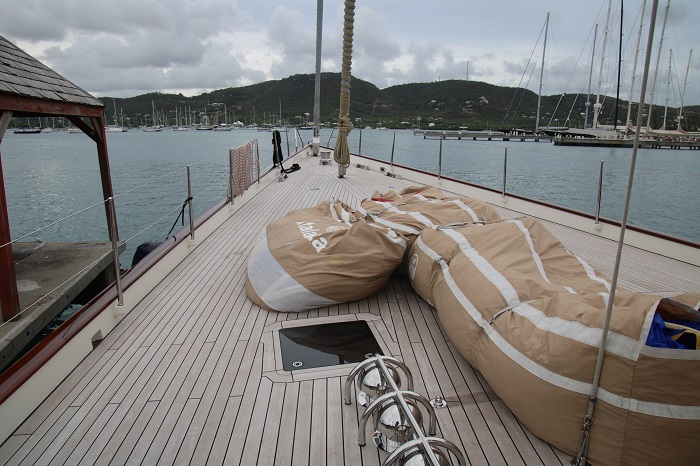 Her aft deck house is immaculate varnished teak.   Notice the fitting that controls the main sheet on the house.  I should have taken a close up of that.  It’s a remarkable piece of stainless work. 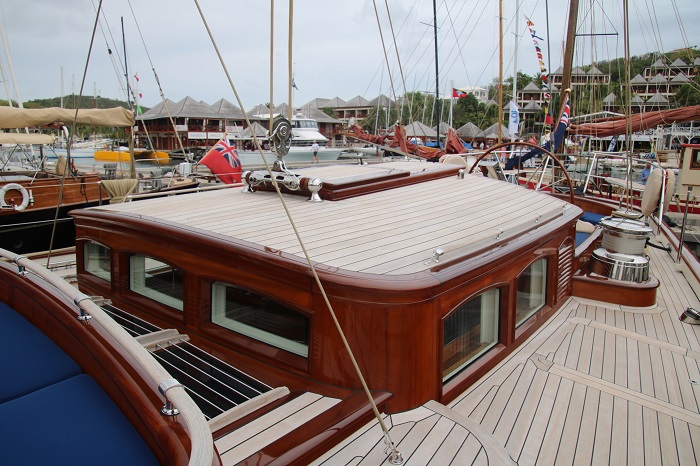 Extraordinary attention to detail in the deck hardware.  Need to check your lipstick?  “Mirrors” everywhere. 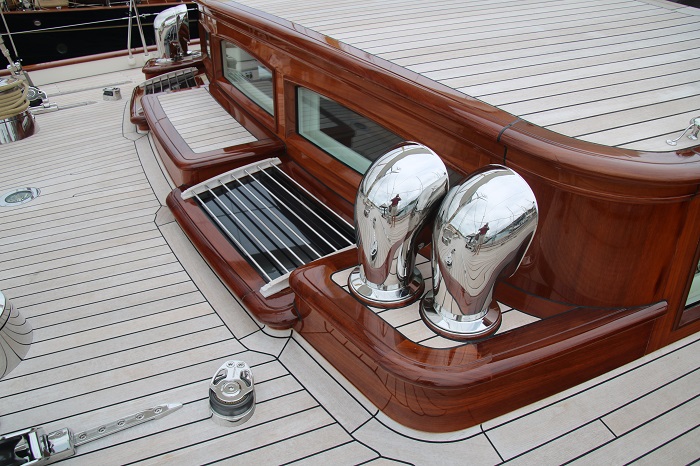 We should all have a nav station like this.   As an interesting note, the crew quarters are as opulently appointed as the owner’s areas, not that common on many yachts where most crew live in fairly spartan cabins. 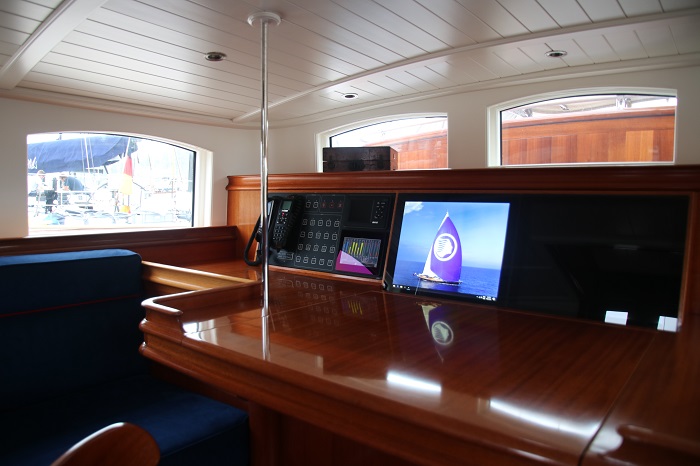 The binnacle is a work of art.  I understand that the compass base, engraved with her name was formed from flat stock with the name and logo carved into the surface and then formed into a cylinder to fabricate the helm framework.  It’s a spectacular bespoke piece of work. 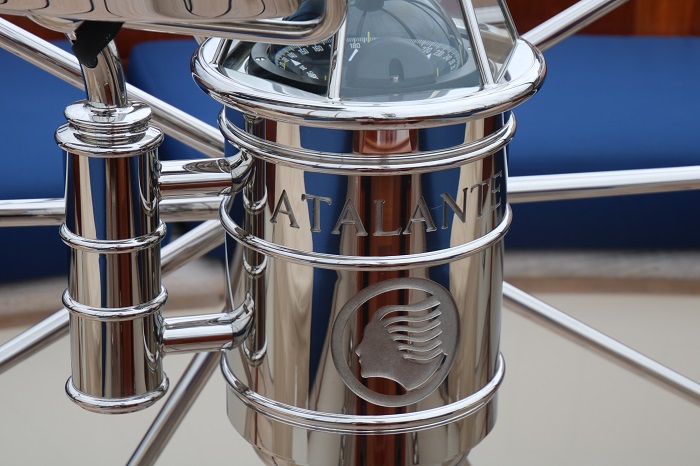 This bar makes me want a nice gin and tonic. 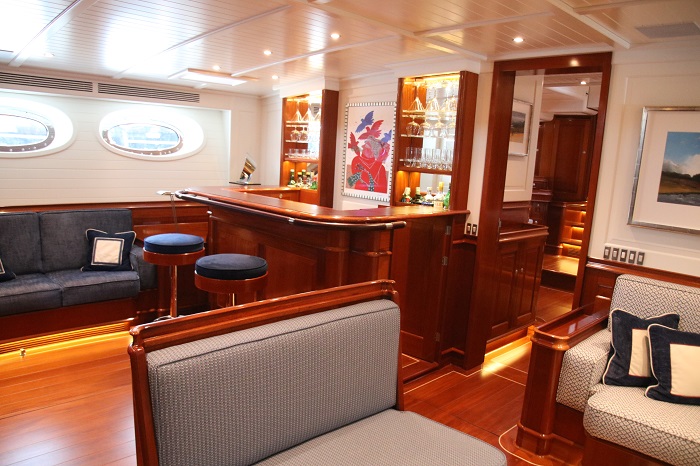 And, speaking of food and drink.  A beautiful galley.   I’ll bet that some great meals come out of here.   Interestingly, the chef and captain are a husband and wife team.  That’s nice. 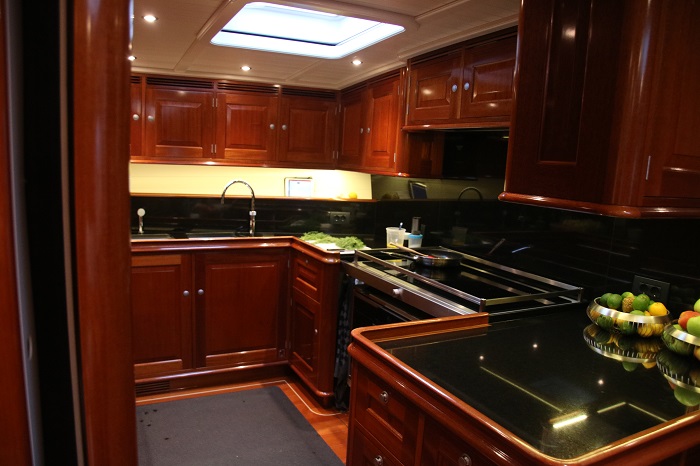 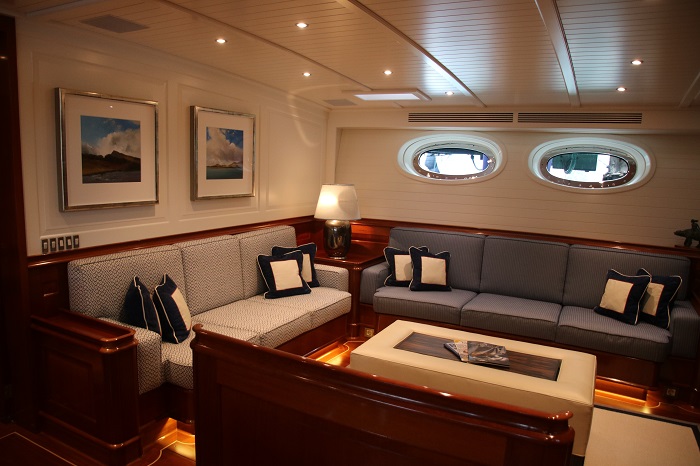 Love the linens in the owner’s suite.  Brenda and I are going to order new bed linens this summer.  Stripes like this would be lovely. 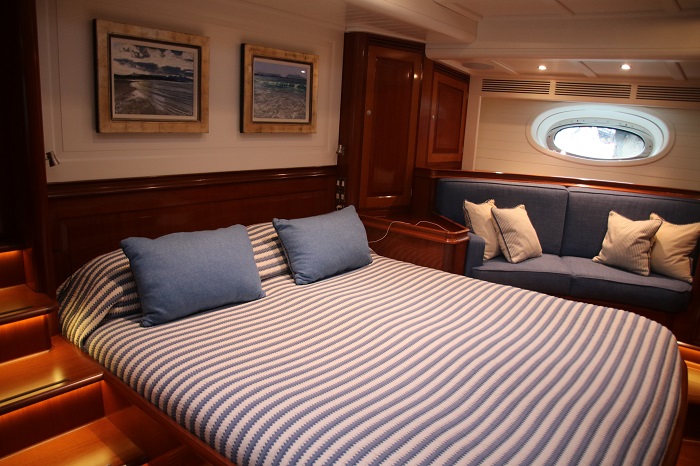 I mentioned earlier that she was built in the Neatherlands, not a spot known for deep water.   This video is a great look at what’s involved in constructing a yacht like Atalante.  It goes into some detail to show the level of detail that goes into building up an aluminum hull as well as getting the finished hull to an area with deep enough water to float her when the keel is in place.  The short video is worth looking at. Atalante is a beautiful piece of modern engineering, steeped in tradition.   What a treat it would be to feel the power of her under sail.   Want to learn more about her.  Follow this link to her site.

Day sail anyone?   Yes, and a G&T would go down nicely as well.  Perhaps Pandora will get some striped sheets too.