I woke up alone today. And, the boat that bras built.

Yesterday Brenda flew home to CT and I my friend Craig flew in to join me.  Don’t get me wrong, Craig is a great guy but I have to say that it was tough for me to say farewell to Brenda as she passed through security at the airport yesterday, knowing that I would not see her again for at least five weeks.

No, it doesn’t take that long to get from “here to there” but it’s sill early in the season and way too cold to be heading to New England.   Setting aside the cold conditions, there is also too much of a risk of gales in the north Atlantic for me to leave the Caribbean and head north.

Most cruisers don’t head north until mid May so my plan to leave around the 5th is already cutting it a bit close.  However, I am planning to stop in Bermuda, nearly 2/3 of the way home, to be sure that we don’t encounter bad weather as we get to the colder waters north of Bermuda.  I’ll work with Chris Parker, our weather router, to determine the best/safest time to sail the remaining 600 or so miles from Bermuda.

Anyway, Brenda’s gone and Craig is here.  It’s going to be fun to show Craig all the great spots we’ll stop as we make our way to Antigua where I’ll hang out for a bit waiting for my crew to arrive in early May.  There will be plenty to do getting the boat ready and certainly there will be folks around that I can hang out with, but it won’t be the same without Brenda.  It’s ironic that the time we are apart, now that I am retired, is longer than we experienced when I was traveling for business.

In an era of tremendously annoying air travel, I sometimes fantasize about what it would be like to travel on a private jet but am completely clear that I will never know what it’s like.   If I could, I’d just wing my way home for a week or so and come back to begin the run back.  No wait, if I had a plane I’d also have a proper yacht “Bob, Bob, get a grip, you are the only one who is available to bring Pandora north.  Get with the plan.”  Oh, OK.

Speaking of private jets, we ran into the crew of one of those here at the resort in Margot.  It seems that the three of them were hanging out for a few weeks while their employer was vacationing with his family on a nearby island.

So, here’s how the whole private jet thing goes.   Imagine going to the airport, having your car pull up to the stairs of your jet and have only to take two steps to the gangway and up you go.  The doors close and ten minutes later you are on your way.

Think that your plans during your three week holiday might change. Changed your mind about spending time with “the wife” and want to find more fun elsewhere ?  Not to worry as your jet and crew are on standby and available at a moments notice, waiting to take you to the destination, that liaison, of your choice.

As your departure time arrives, the head stewardess, captain and co-pilot return to the aircraft and prepare if for your arrival, with our without your family.  Your choice.  They make up the beds and prepare the cabin, catering food and drink, to make your trip back “across the pond” as seamless as possible.

Sounds unbelievable?  No really, it happens, as long as you have the coin.   You do?  Well, this could be you.

Anyway, these same people are the ones that have the magnificent yachts that seem to be in every harbor.

How about the 245′ yacht Cloud 9, launched last may in Italy.  It’s owned by Brett Bundy, one of the richest guy in Australia.    He has started and sold a number of very successful businesses, some sort of related, to me at least, including one that raises cattle for high end beef production and a company called Bras and Things as just two examples.  So, along the way he’s made loads of money, try $650,000,000 or so, some say billions.

Well, Cloud 9 showed up here in Marigot a few days ago, complete with their 25 or so crew.   Nicely done Brett. 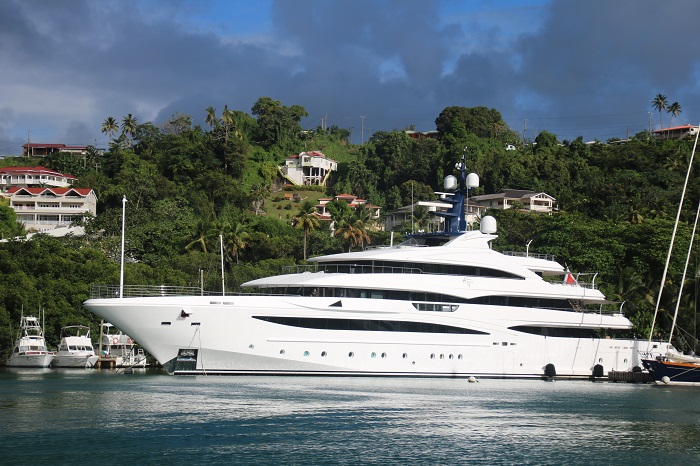 As they dropped the mooring holding her bow out from the dock, the guy who does such things looked positively insignificant working under the bow. 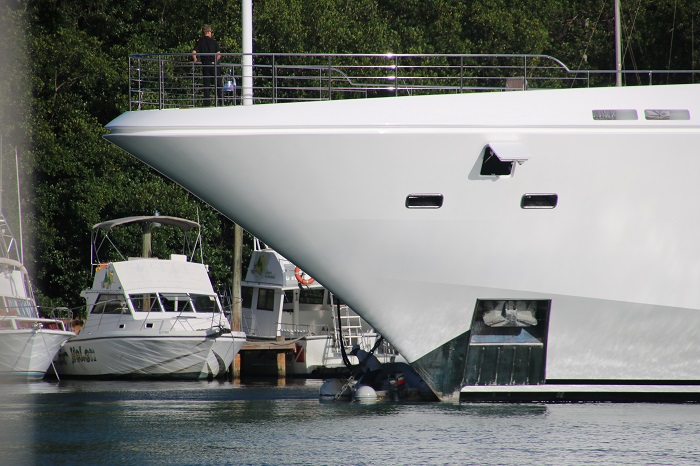 There are plenty of impressive yachts in this harbor including plenty that are larger than Pandora.  However, it’s hard to believe that this yacht even fit. 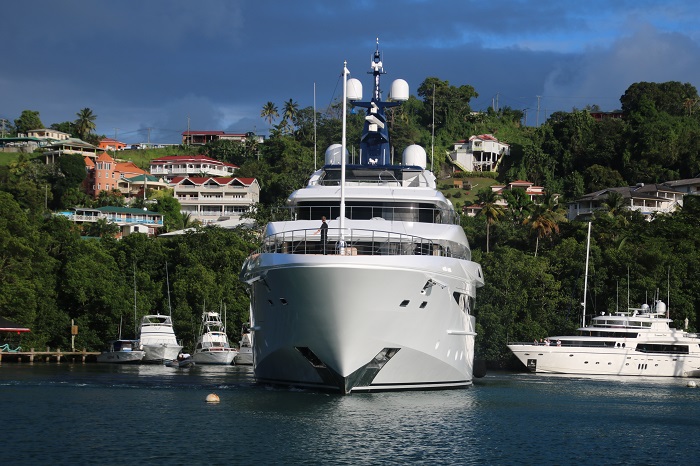 As she left the harbor she went by our friends on Endless Summer.  Endless Summer isn’t a small yacht but looks tiny-winy compared to Brett’s boat. 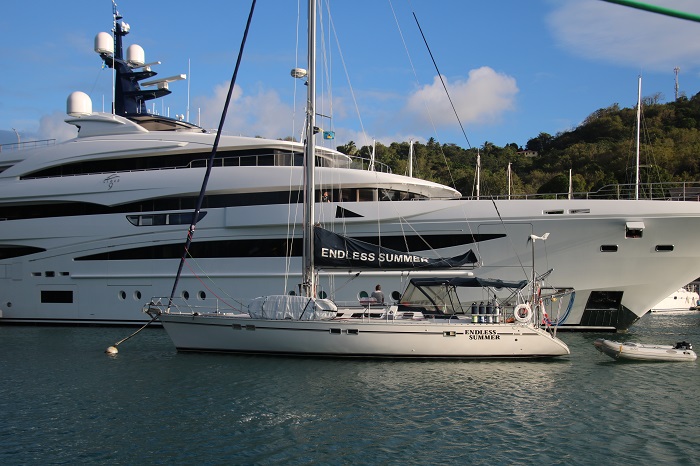 The passengers, about 12 in total, verses the 22 crew, looked pretty cool and collected on the afterdeck.  We heard that the “charter” included the board of directors of the University of Texas.  I sure hope that the university, a state school, didn’t foot the bill for the $800,000 weekly charter fee.  I expect not.  Perhaps an “in kind” donation to the university.   All the guys were wearing matching caps.   Hmm… 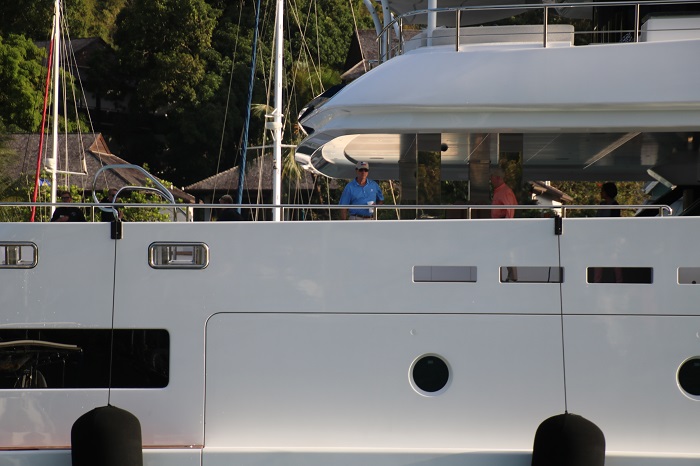 Not sure what this guy does but he looks really official with his headphones on. 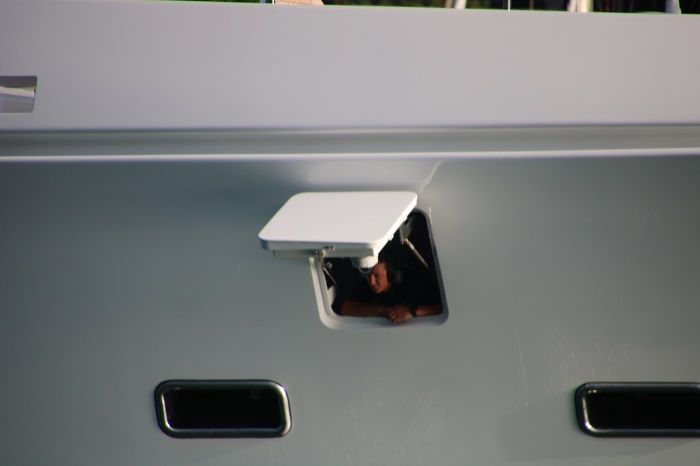 So, off the went into the sunset, bound, we later learned, for the Pitons.  The next day Brenda and I stopped there overlooking the harbor where we had taken a mooring only a few weeks prior.  The view of the Pitons from so high up was spectacular. 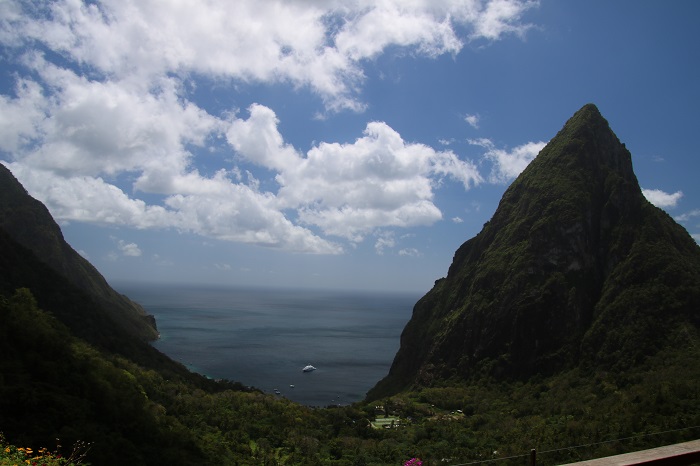 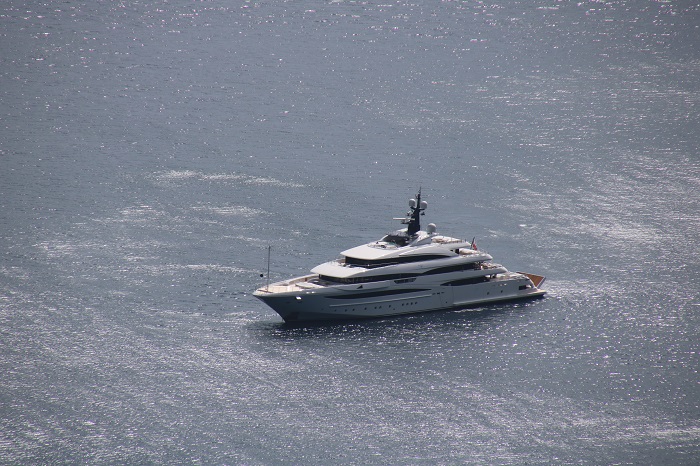 We had a very nice lunch.  I  wonder what “the board of directors” had?  Ours was great.   Well, this photo is only of one “course”.  We don’t just drink wine all the time.  Well, perhaps we do. 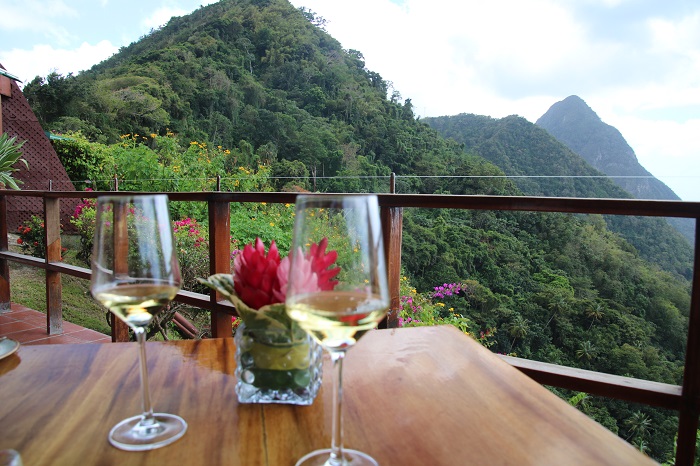 Everyone looking for a handout.  This guy landed on our table seemingly about to say “what you looking at?  Pass over a fry!” 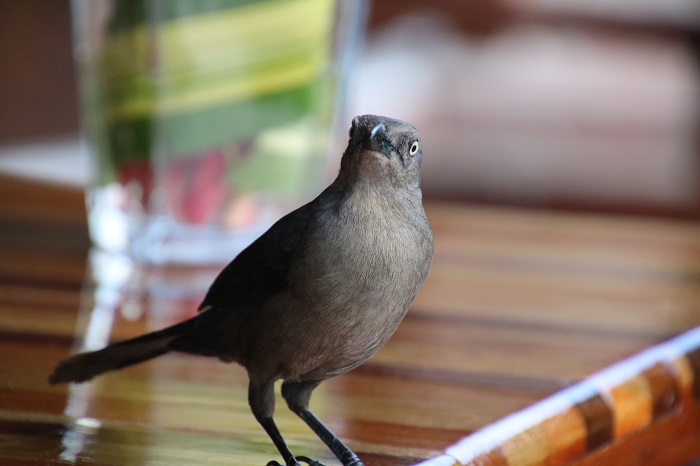 Here’s the view of where we sat.  It was perhaps the most spectacular vantage point we have ever seen. 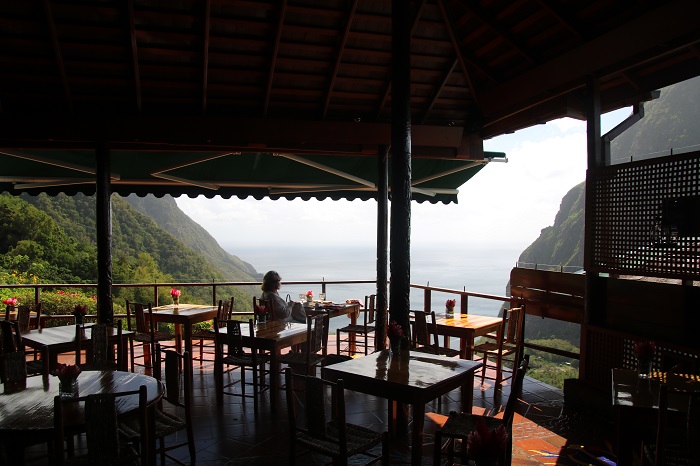 One more view of the place where we had our drinks.  Pretty amazing. 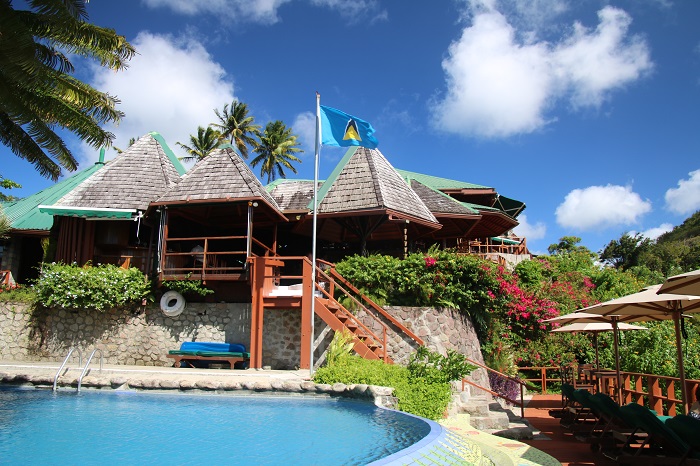 Oh yeah, the resort has an infinity pool.  Perhaps the only one you will ever see where you might get a nose bleed from the altitude. 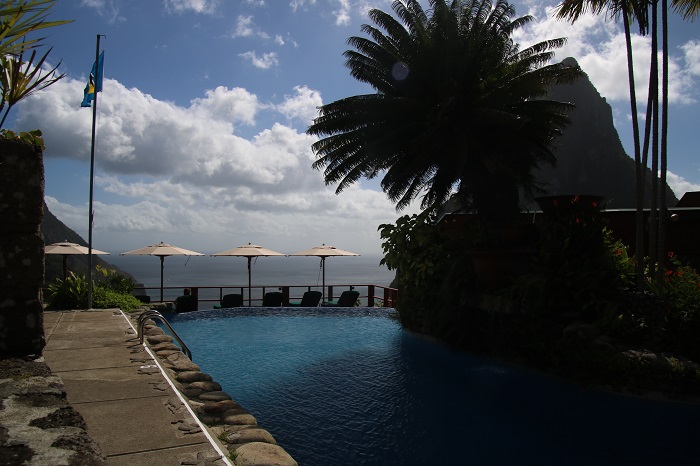 On the way back to Pandora, another view of the Pitons.  Really amazing. 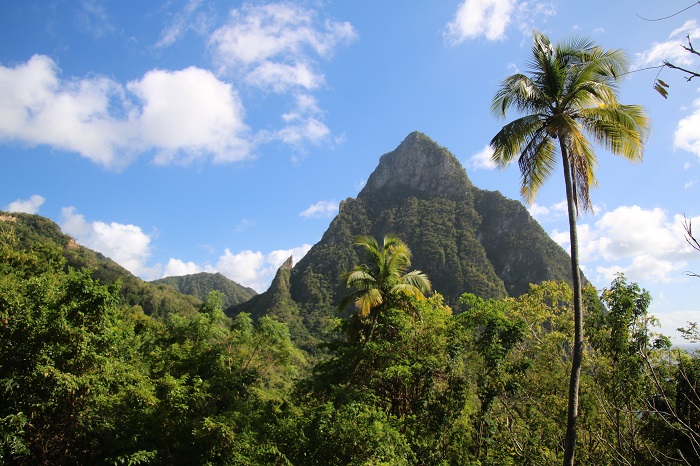 The road had a remarkable number of twists and turns and always an amazing view around every hairpin corner. 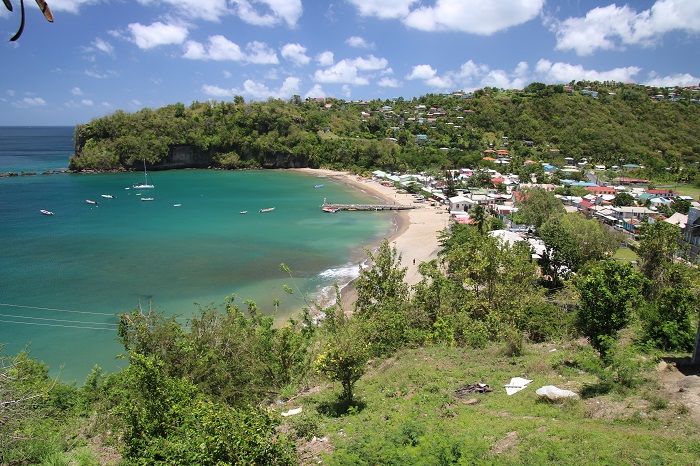 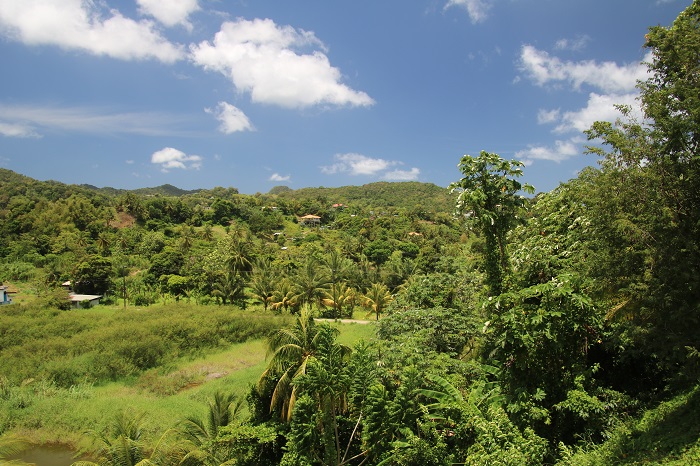 By the time we got back to Pandora, switchback after switchback, I  was ready for a nap.  No, it wasn’t the wine.  We shared a single glass knowing that the drive was going to be a challenge.

Well, that’s it.  The “end” of our cruise together this season.  Our last stop, St Lucia is really a beautiful country but right now, it’s the place where Brenda flew the coupe and that makes me sad as it’s going to be a long time till I see her again.

I am so bummed.  I woke up alone today.  But I did get to write about bras.

Sorry for being whiny.

One response to “I woke up alone today. And, the boat that bras built.”