>After much debate, just prior to the Labor Day weekend, we decided to leave Pandora in Rockland and head back to NJ and home while waiting for hurricane Earle to make his run up the East Coast.   I had arranged for crew to bring her back over the long weekend but it was clear that, direct hit or not, the seas and weather were going to be unsettled for days to come and I didn’t want to extend our visit by a week while we waited for favorable NW winds to make our trip home.  It’s also difficult to get crew on short notice that have the flexibility to make a run with short notice as most work full time and have those “pesky day jobs” to worry about.  Fortunately, after leaving the boat and heading home, Earl had a lot less impact than expected, although you wouldn’t have known it if you watched the breathless reporting by the networks and the Weather Channel.

It is amazing how weather has turned into a national obsession.   Who would have ever expected there to be cable shows, with millions of viewers, based solely on reporting on the weather.  I for one, get my weather from the Web as it’s a bit more dispassionate in it’s reporting.  The National Weather Service has never been known for their editorializing, and NOAA, and his/her robotic voice on VHF weather certainly doesn’t have the breathless delivery of a network anchor.

My favorite source for weather is www.wunderground.com and www.sailflow.com with the former a great source of long range forecasts, such as they are, and the latter good for marine wind directions for most locations up and down the East Coast.

With Earl bearing down on New England we headed home with the hope that Pandora would not be pounded by hours of strong easterly winds, a direction from which the harbor is heavily exposed.  Well, the decision was made to get a mooring and head home to wait out the storm.

If you have ever visited Rockland, you probably know it as a great harbor with loads of moorings as well as space to anchor fairly near to town.   While I usually get a mooring, on our last visit, after paying for so many moorings over our six week visit in Maine, I decided to anchor, something that I have done in Rockland off and on over the years.  However, as is so often the case in heavily used old harbors, there is a risk of hooking an anchor on some sort of old junk that was jettisoned overboard as no longer usable.

In over 30 years of sailing I have only snagged my anchor on something big twice.  Once in New York Harbor when I pulled up a massive old cable when I anchored off of Governor’s Island during an op-sail in the early 90s, a place where I shouldn’t have been been in the first place, and again last week in Rockland.

I had tried to anchor near the cement factory, to the left of the mooring field as you face town from the water, with my 65lb bruce anchor.   This anchor usually hooks in well without a lot of scope, but this time I had to put it down twice before it bit in well.  In actuality, it was hooked much more securely than I realized.

Later that day I decided to move in closer to a mooring as I just wasn’t comfortable being out quite as far from town I was and decided to pull up the hook.  All went well until I had most of the chain in and was trying to pull the anchor out of the mud.  It seemed that the anchor just wouldn’t break out, something that sometimes happens after we have sat in fairly heavy winds overnight.   However, I had only had the anchor down for a few hours in this case.   Oddly, no matter how hard I used the windlass or the engine, I just couldn’t break it out.

It wasn’t long before I realized that this wasn’t coming up using normal means and that more “extreme” measures were required.   After messing around with things for a while I decided to attach a line to the chain with a chain hook and ran the line to a winch on the mast to muscle the anchor up.  I took up the slack, such as it was, and secured it with another line so that I could again attach the chain hook, pull it in a bit more, remove the hook, take up the slack and so on, until I was able to, under extreme loads, get the anchor up to the surface.

The strains on the line and chain were a bit daunting and as I winched it in and I began to fear that something would break under tension and, well, who knows what…

Finally, I was able to get the anchor up to the surface and saw what was going on.   I had picked up an old towing hawser from a barge, many loops of  a large steel cable used, at least prior to it being tossed over the side, for a tug to pull a barge under tow.  This shot shows how well hooked we were. 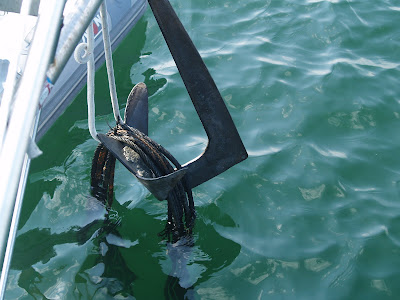 Fortunately, someone on a nearby boat was watching me struggle with the anchor and came over to help.  With his assistance I was able to take a line from the bow loop it under the cable and back to the bow.  Once this was accomplished, and tensioned properly, I lowered the anchor slightly so that my helper was able to pull each loop off of the anchor so that it settled into the rope loop that I had put in from the bow.

Once this was accomplished, I was able to get the now freed anchor out of the way and slip one end of the rope so that the cable dropped back down to the bottom.  The exercise, and yes it was good exercise and I was sweating fairly well by the time it was over, took nearly an hour but it worked, thankfully.  With out help I am not sure I would have been able to solve it as easily and certainly appreciated someone coming to my aid.   As this was unfolding Brenda was ashore so I was on my own.

After freeing myself from the cable, I was able to get a mooring for the night and begin to preparing Pandora for the storm and our departure.    I have certainly make a mental note, and you should too, to think twice when you anchor in a harbor that has had lots of industrial use over the years.  Some make a habit of rigging a trip line when in an unfamiliar harbor so that they can more easily retrieve a snagged anchor.  Perhaps I will too in the future.

The storm passed without a whimper and I am now preparing to head back and bring her home.  The weather report suggests that we will have NW winds beginning on Wednesday which will hold for a few days while I bring Pandora back to Mystic.  The sailing season is about over for me as work is busy and I can’t spare the time to run her to Annapolis, our preference to extend the sailing season.

For now I will have to satisfy myself with a weekend or two aboard prior to pulling her out in Norwalk CT for the winter.  I can always think about sailing next season.  Hmm…

As I write this I am in Nantucket with Brenda for a friend’s wedding.  What a wonderful place. But, more about that later.