Antigua?  Been there…  Port Captain?   Done that…

It was a few days in late October before we were scheduled to leave Hampton VA to head to Antigua and anticipation of what was to come was high.  Pandora, my Aerodyne 47 sloop was as ready as she would be and my crew was excited.

We’d been listening to Chris Parker, who I had been working with on each of my trips for the last 6 years, and were trying to make sense of his forecast calling for extremely light winds and how we’d make it the 1,500 miles to Antigua without running out of fuel.   Fortunately, Pandora is what Chris refers to as an “easily driven vessel” so I was feeling like it would likely be easier than predicted and besides, there always seems to be more wind than is called for when I am offshore.

After my previous experience of making the run to the BVIs in January of this year and “enjoying” gale force winds and 20′ waves for nearly 5 days, the prospect of a calm run was very appealing, although, as port captain for the rally, I was feeling real pressure to get to Antigua as soon as possible so that things would be ready when the rest of the fleet arrived.  Of course the Dawgs would be looking for a good time and I didn’t want to be the one that fell short. And not to torture the whole “dawg” thing too much, I was really hoping when they got to Antigua, that “the the Dawgs would like the Dawg food”.

As far as planning was concerned, with all the hurricane damage in the BVIs in October, just a few weeks prior to departure, the board decided to head to Antigua and with less than a month to plan, it was my responsibility to be sure that those who made the run would have a great time when they arrived.   It just wouldn’t be fitting if 50+ boats sailed 1,500 miles and didn’t feel “the love” when they got there.

Brenda and I visited Antigua for a month last winter and had really enjoyed our visit so I was anxious to do everything possible to make for a great time for the 55 boats that would ultimately make their way to Antigua.

Even with nearly 80 boats leaving Hampton, we were only within eyesight of any other members of the fleet for a few days.  A view like this, a boat on the horizon and a full moon rising isn’t something you see every day.  We took it as a good omen. 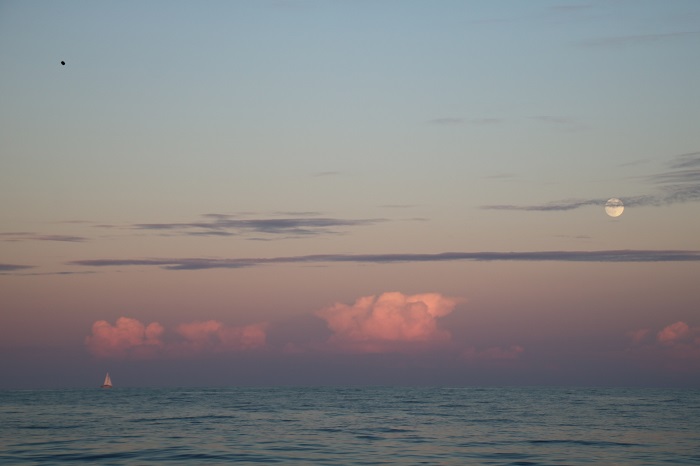 While it’s not news for those of you that follow this blog, the trip was indeed relatively uneventful and we did what we could to get as far east as possible, get around the ridge, catch the trade winds and avoid motoring the entire way.

Don’t Chris and Jim look happy?  Actually, that was about as rough as it got on the whole trip.  Well, that’s if you don’t count the 20+ squalls we went through.  With our new cockpit enclosure, what squalls? 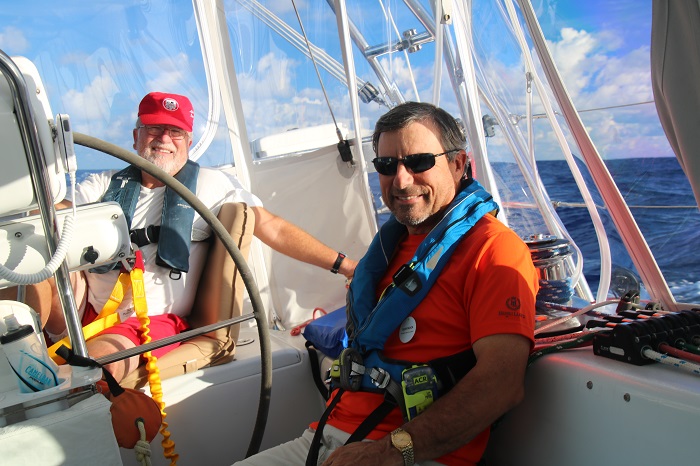 Things held together pretty well and it was only Jim’s eagle eye one night that averted disaster when the fitting on the boom that holds the tack of the main broke.  A few minutes longer and the main would have ripped from tack to leech.  I dropped the main immediately and went to work lashing the clew to the boom and mast.

It wasn’t pretty but held just fine for the rest of the trip.  This is just one reason that I keep a good supply of Dyneema, super strong line, aboard.  You can see that one “ear” of the “rabbit ear” fitting is gone.  I always thought it looked a bit fragile.   In Antigua I swapped it out for another bolt I had on board. All better now. 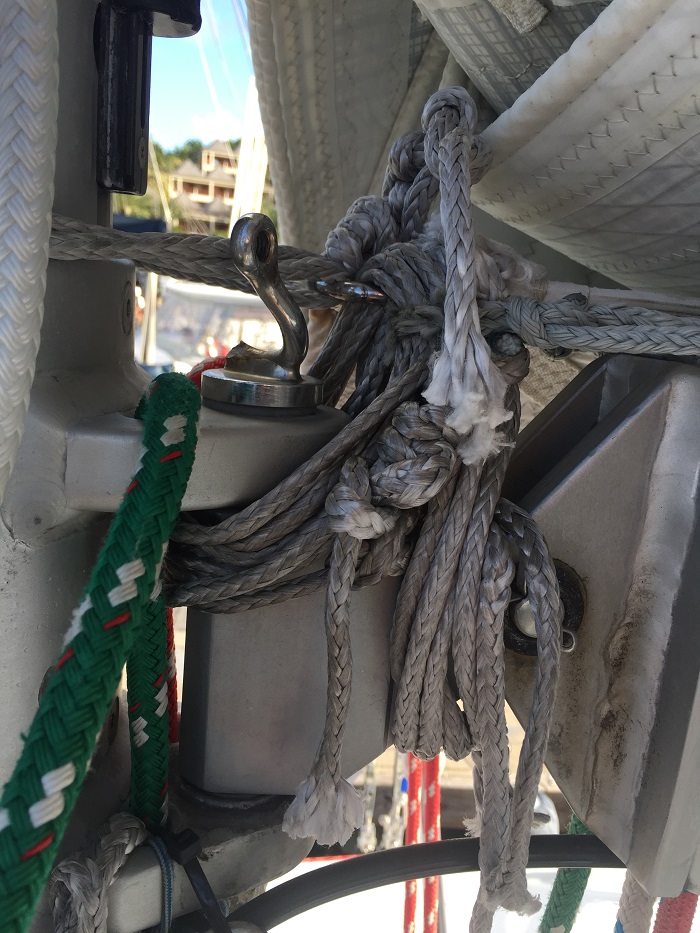 And, speaking of sailing, or at least motor sailing as the engine did run 100+ hours on our way south, Pandora is a fairly light boat and can sail at a reasonable pace, assuming her main isn’t ripped to shreds,  in wind as light as 10-12kts so I was fairly confident that we’d be able to make it all the way without using up the 155-175 gallons of fuel that we had on board.   I use that capacity as a liberal estimate, as I really don’t know exactly how much of the fuel we have in our tanks we can actually use.   It turns out that the one “50 gallon” tank we ran dry, only took 38 gallons to refill.  I do wonder about the other two that supposedly hold 50 gallons.   Before learning that at least one tank is smaller than advertised, I assumed that we held 150 gallons between the three tanks and another 25 in Jerry jugs.  Now, I’m not so sure.  I guess I’ll have to run the other two tanks dry and hope that the engine doesn’t quit at an “inopportune” moment.   Having a boat where only three were built is always a bit of a “scavenger hunt” any time I need something.

Dry fuel tanks or not, I was very focused on keeping Pandora on the move without burning any more fuel than I had to and to get there as close as possible to the ten day goal that I was shooting  for.  Besides, Brenda doesn’t do the long runs with me and I really wanted to be there by the time she flew in on the 15th.

I have done a fair number of offshore passages over the years and find that for the first few days I feel like “are we there yet” and by the 4th or 5th day the only way I can even tell how long it’s been is to look at my log and count the days that have passed.  Being a skeptic about electronics and knowing more than a few friends that have had all their electronics knocked out by a lightening strike, I log our position every two hours including our course, speed, battery level and other important numbers , just in case. 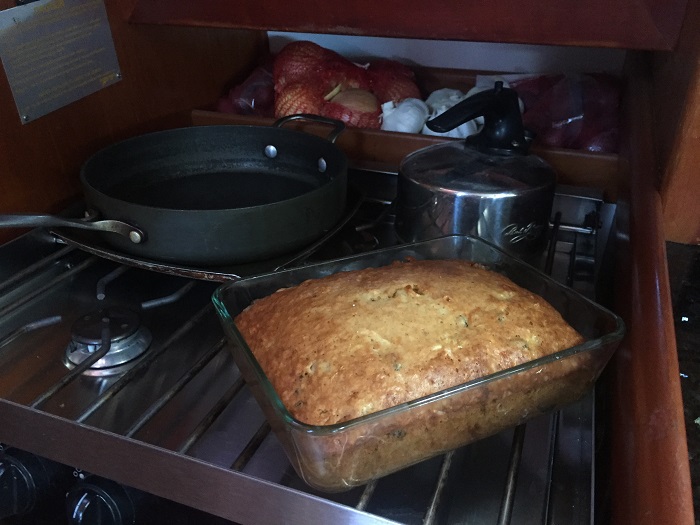 Preparing three meals a day along with keeping things clean down below, staying in touch with Chris Parker’s twice daily SSB nets and checking in with the fleet keeps me pretty busy.  I also like to do a daily blog post when conditions are reasonable and that burns up a few hours.

Under the category of “just how much can you photograph while underway” category, here I am at the nav station writing a post. 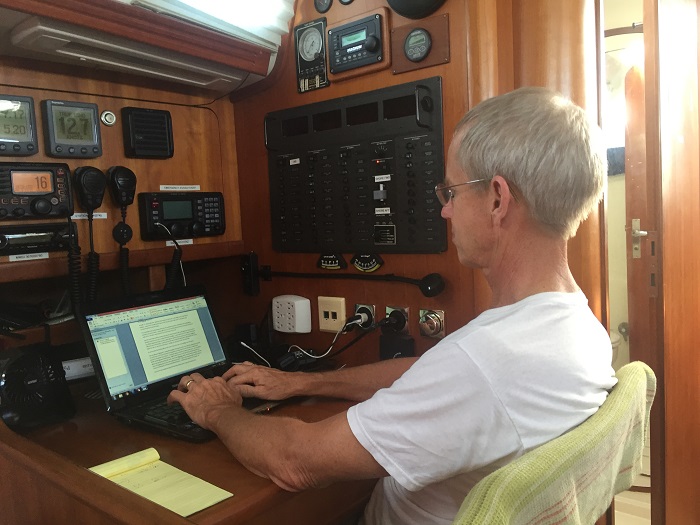 Anyway, we made it and were one of the first boats to arrive in Falmouth Antigua.  I tied up at the Antigua Yacht Club Marina where I stayed until Brenda joined me and got settled, nearly a week.  Chris and Jim had to head out the very next day so I made sure that before they left that they had the best breakfast in Falmouth or Antigua, at the Admiral’s Inn.

Just so you’ll think, for a moment, that this post is actually a shot of my breakfast on Facebook,… Why is it that EVERYBODY puts photos up of food? 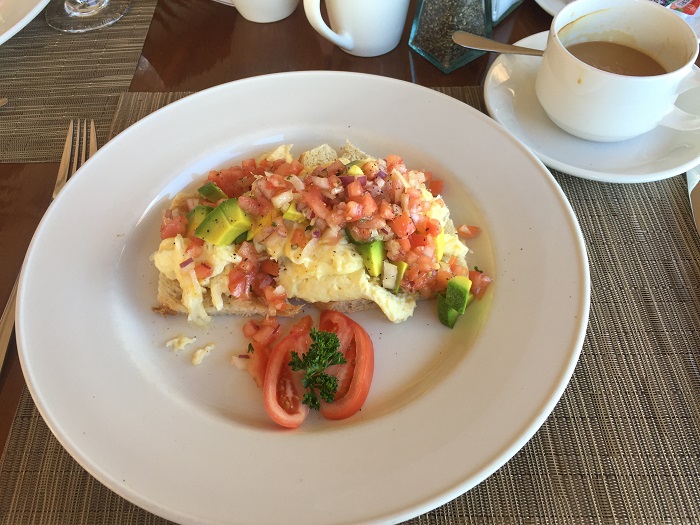 Yes, it was really tasty and my crew, they sure look happy. Hope it’s not because they FINALLY had a decent breakfast. 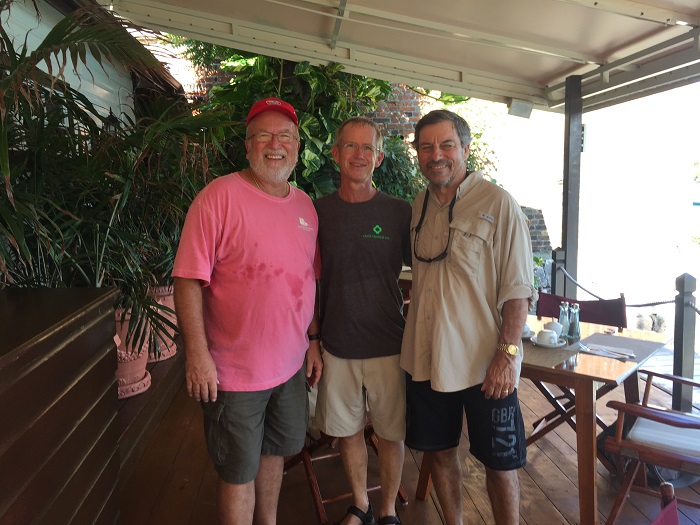 I rarely tie up at a marina but the convenience of just stepping onto the dock is pretty intoxicating, as was the wine I shared with other Dawgs on the dock, I’ll admit.  Besides, if I’d anchored out I would have been all alone and you know how much I hate that.

As port captain and “responsible party”, I was really focused on making the shore side activities so great that nobody would question why they had come all the way to Antigua.  And given the long history of the rally, that was going to be a tall order.

So, there I was, a Dawg with a mission.  A mission to making landfall in Antigua the best it could be.   However, that was complicated by the fact that nearly a quarter of the fleet decided to divert to Bermuda to refuel because of the light winds and others waiting it out in Hampton for better sailing conditions.  That meant that the fleet was spread out with nearly 1,000 miles between those who left with us and those who opted to leave later or stop in Bermuda.

For the month or so after hurricanes roared through the eastern Caribbean I spent countless hours on the phone contacting folks in Antigua.  At first I was just trying to find out who to talk to and then focusing on setting up events.  All the while not knowing exactly when the fleet would arrive.

“Yes, we’d like to have a welcome dinner at your place but I really don’t know when it will be.  Interested?”  Fortunately, they were and everyone I spoke to was very supportive and anxious to help.

We had some really terrific events including several cocktail parties at Pillars, part of the Admiral’s Inn, a fabulous spot in Nelson’s Dockyard in historic English Harbor. We held our arrival dinner at Boom, another part of the inn, overlooking the dockyard.   Then you already knew about that if you follow this blog as I have written more than anyone wants to know on the subject.

So, here I am in CT struggling to get the lawn and gardens put away for winter and to prepare our home for a long winter nap before we return to Antigua after Christmas.   And, all of this is punctuated by visits to MD to see our family and our new granddaughter Tori who’s about to turn one.   I can’t resist sharing a photo of her when she was christened last week. 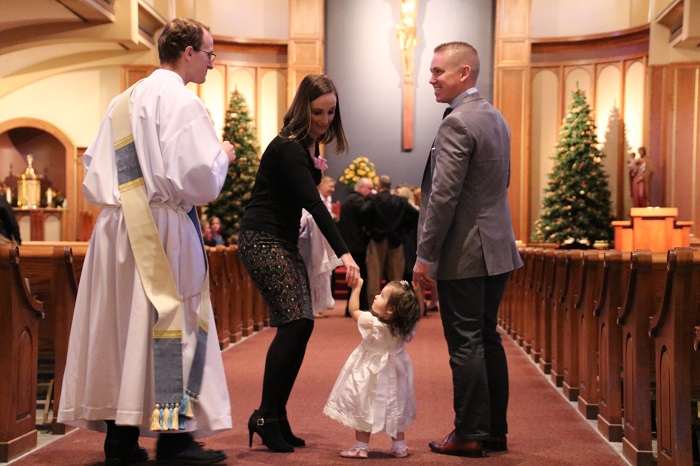 Yes, as they say “home for the holidays” and as far as Antigua is concerned, been there and Port Captain, done that, so I’ll just leave it there for now.  Besides, Brenda’s home and it’s opening time.

And, you wouldn’t want me to get out of practice, would you?

One response to “Antigua?  Been there…  Port Captain?   Done that…”