Wagging the Tail of the Dawg.

As I mentioned in my last post, all the participants in this year’s Salty Dawg Rally arrived safely to their port of choice.  With over 80 boats participating and distances traveled of between 1,000 and 1,500 miles, there was ample opportunity for stuff to break and as a result, have great stories to tell.

And, as port captain to Antigua, and a competitive one at that, I wanted to be sure that there was plenty going on and lots of fun stuff to do over the ten day period, during which, the fleet trickled into port.

With that in mind, there was a variety of activities to keep the Dawgs happy including dinners, cocktail parties, cookouts on the beach and ladies lunches.

Perhaps the most important thing was to be sure that crews on the last boats to arrive would have at least one party to attend.  After perhaps nearly two weeks at sea, it would be a total let down to arrive and learn that all the parties were over and that everyone had gone on their way leaving them to say “hello, hello, is anybody here?”.

So, what’s a port captain to do?  Well, these are after all sailors and what do sailors like better than a cocktail party?  Here’s an idea.  How about a “Tail of the Dawg” cocktail party to recognize the boats that “brought up the rear” or “wagged the dawg”, of the fleet to torture the pun just a bit more?  And, on top of that, how about telling some “tales of the Dawg”.  Get it, TALE of the Dawg and TAIL of the Dawg?   “Just Shut Up Bob, we get it and it’s completely lame.”

Ok, so we had a party and I gave out awards.  Yes, I know that it is a bit pedantic to go through all of them but it was fun and I found some local businesses to donate items and they do deserve credit.  Besides, I thought that the “awards” were fairly clever.  Well, to me anyway so humor me on this and read on.

We held a number of these events at the Admiral’s Inn in historic Nelson’s Dockyard.  It’s a really beautiful spot for the Dawgs to spend time together. 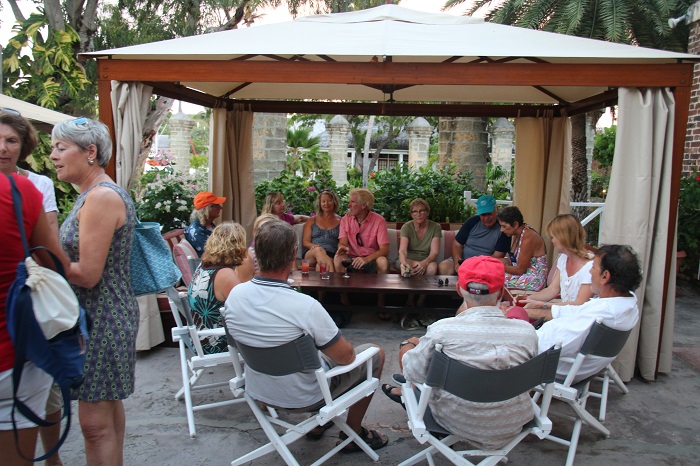 Of course, a club like the Salty Dawg Sailing Association is only as good as it’s members so I thought it important to recognize those members that joined the SDSA most recently.    Those two “winners” learned about our group in Antigua and decided that they just had to become members.  Meet the newest members of SDSA, Brett of Malaki, who I had spied in the harbor and invited to our events enjoyed the group and decided to join and the “other” new Dawg (Ugg.  I lost her name) who was in Jolly Harbor after delivering her boat, her first blue water passage, heard about us and contacted me about joining in on the festivities.   Newest members? You win “official” Dawg shirts.   Help me, please!  Her name?  Also, want to join and be part of the fun?  Click here… 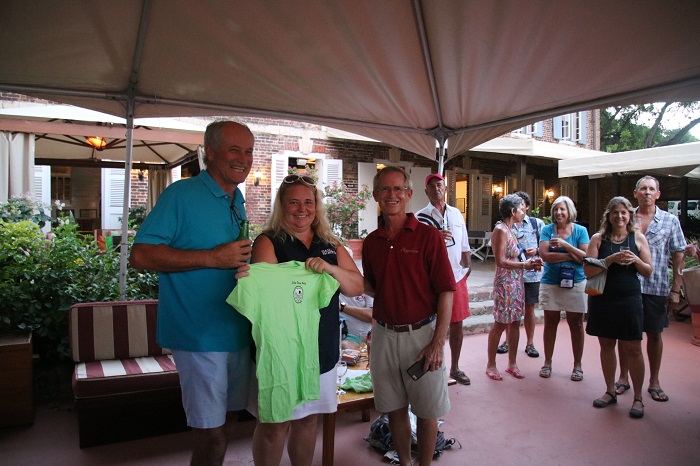 Of course, when you take upwards of 100 boats out on the ocean for long passages, stuff breaks.  So, how about prizes for the worst luck?

The runner up for most broken stuff were Bill and Maureen on Kalunam00, who broke their boom in half.  Bad but not the worse.  Hey, you need a few “tots” of rum and some twine to tie everything back together again. 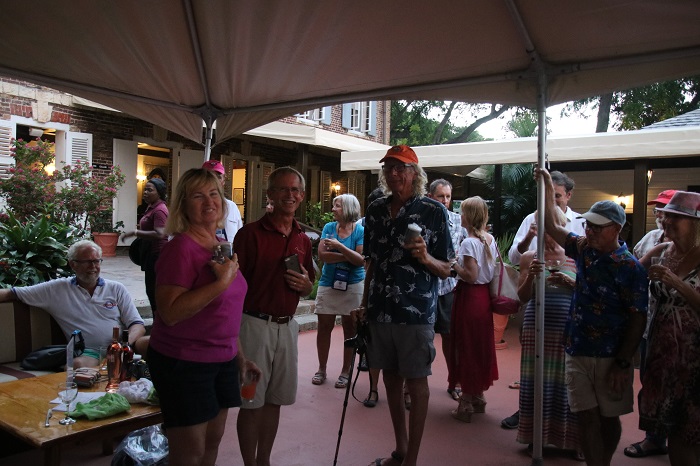 But wait, it gets worse… or better, depending on how competitive you are I suppose.  It’s up to you to decide which of the two couples won this round.    From my perspective, it seems to me that they are both real winners.

Mike and Ronna from Exodus were very excited to get a bottle of rum donated by Cork and Basket in Falmouth.  What’s so special about them, you ask?   Where do I begin… Broken rudder arm thus no steering and they lost their refrigeration, an alternator and a bunch of other electronic components that were soaked by a failed hose clamp installed by a sloppy mechanic.  Talk about bad luck.  I expect they will need that rum. 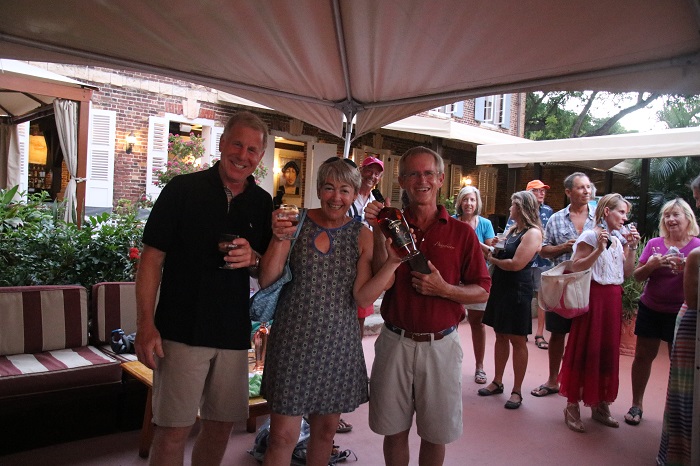 Another very strong contender in the “really terrible luck” category were Mike and Daniella on ZigZag, who in spite of “zigzagging” on their way south, trying to stay out of trouble, somehow managed to get struck by lightening, loosing nearly all of their electronic systems, hundreds of miles from shore… That’s terrible luck in my book and certainly worthy of recognition.  How about a bottle of wine from Covent Gardens Grocery. 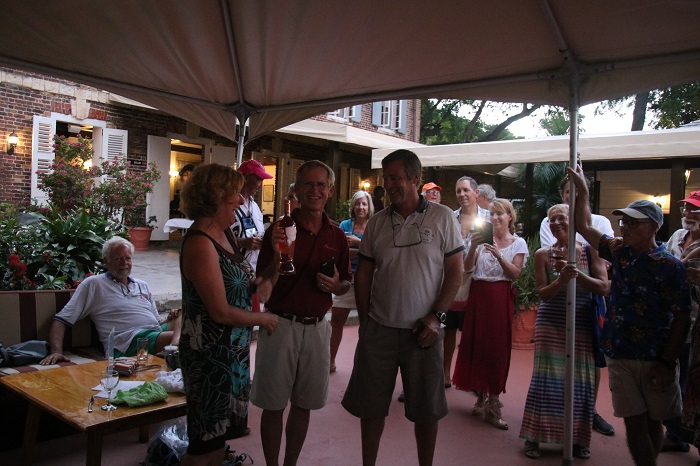 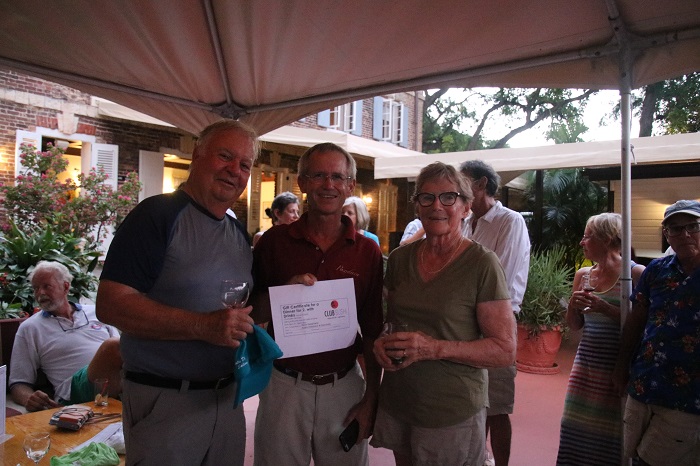 Oh yeah, one more.   How could I forget all the wonderful support I received from Suzanne on Suzi Too who pitched in with the morning net and saved me on the night of the arrival party, checking in over 100 Dawgs and making sure that everybody paid.  And, that doesn’t even count the Ladies Lunch, cookouts on the beach and numerous other fun things she cooked up.   Thanks Suzanne.  Her prize?  A one-of-a-kind hand made Salty Dawg Mug from the BVIs commissioned by Bill and Linda, founders of the rally. 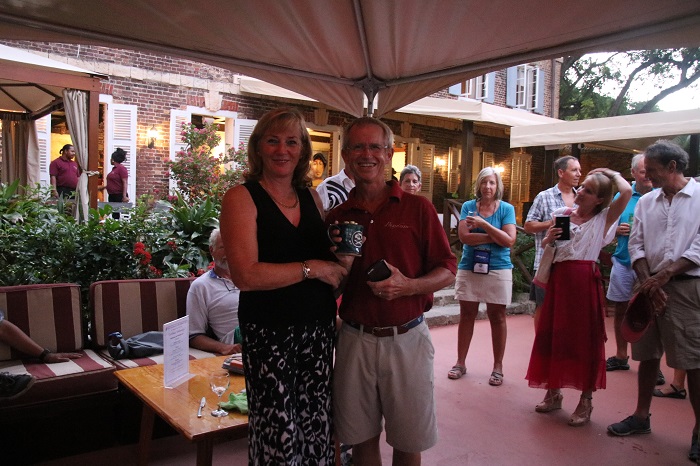 So, there you have it, Tales FROM and the Tail OF the Dawgs.  Perhaps not one of my most scintillating posts but hey, I think that the prizes made the Dawgs wag their tails.

“Really Bob, that was the most lame Dawg Tale ever…”

Perhaps… I’ll try to be better next time.

2 responses to “Wagging the Tail of the Dawg.”