It’s Friday morning, the day after Thanksgiving and Brenda and I are flying back to the US to be with our family in Baltimore.  It’s going to be a long day as our flight from Antigua doesn’t even leave until late afternoon and gets into BWI really, really  late.

Under the “you can’t get here from there” rule of traveling,  flights in the morning from Antigua aren’t possible, at least not to where we want to go.   I guess that’s because most folks flying back from a vacation want to milk the experience for every additional hour and thus, afternoon flights.   For us, heading to the US, and our family, is the vacation, a break from our “winter home” aboard Pandora.

We won’t be in Baltimore for long, just a few days as our granddaughter Tori is being christened on Sunday and then we will head back to CT and our “summer home”.    However, with Tori’s first birthday coming up in late December we will be back in MD once again for that and home, one last time, to winterize our home, blow out the pipes and set, yet again, many, many mousetraps with the hope of keeping too many of those little pests from taking up residence while we are away.

So, after our whirlwind visit to the north we will return to Pandora to resume our 6th winter afloat and additional time with the “Dawgs”.

Which brings me back to the title of this post.  I arrived here in Falmouth Antigua nearly two weeks ago and for the last ten days, it’s been a crazy busy series of parties and get-togethers with others who participated in the Salty Dawg Rally to the Caribbean and in this case, to Antigua.

We had cocktail parties, a welcome dinner and cookouts on the beach with something going on nearly every day and sometimes two events in a single day.  Friendships have been renewed and we’ve met new cruisers many of whom will also be heading home for the holidays.  For some, this rally is just the beginning of a voyage for several years to distant lands that may very well take them west to the Panama Canal, into the Pacific and wherever the winds and their whims may carry them.

This year’s rally to the Caribbean brought together over 80 boats with some opting to go to the Bahamas and some to the islands that were ravaged by this year’s hurricanes.  And, lucky for me, as the Antigua port captain, 55 made their way here to Antigua.

As “port captain” I was responsible for pulling together all the activities and logistics for the fleet here in Antigua and it was a big job.  However, I received so many positive comments and help from others that it was a very enjoyable and worthwhile process.

So, now it’s over.  Well, at least, all the initial planning and running around to local vendors as well as the fielding of endless questions from those who have not been here before.  Now that that’s done. what remains are lasting friendships and the memories that make the planning for events like these so rewarding.

As with any long sea voyage,  there was plenty of adversity getting here and some boats suffered serious mechanical problems including the loss of steering, refrigeration and even one that was struck by lightning and lost nearly all of their electronics.  However, even the difficult moments somehow brings everyone together in a way that “normal life” just doesn’t.   I guess that it’s sort of like summer camp or even a college reunion where life speeds up and friendships are made quickly only to be rekindled months or years later as though no time had passed.

Some of the events that I planned were worked on months in advance and others just sort of happened spontaneously.   Two days ago it occurred to me that there were many with us that had never been to Antigua and I thought that it would be a good idea to engage the “experts” among us to show the way for others that were exploring the islands south of here for the first time.

Our friends Maureen and Bill of Kalunamoo have spent several seasons exploring the islands from Puerto Rico to Trinidad so I asked Bill to lead a discussion.  With only one day warning, Bill arranged a very informative talk and half the fleet showed up to hear what he had to say.  It’s this sort of spontaneous support for others in the group that makes this such a wonderful “community”. 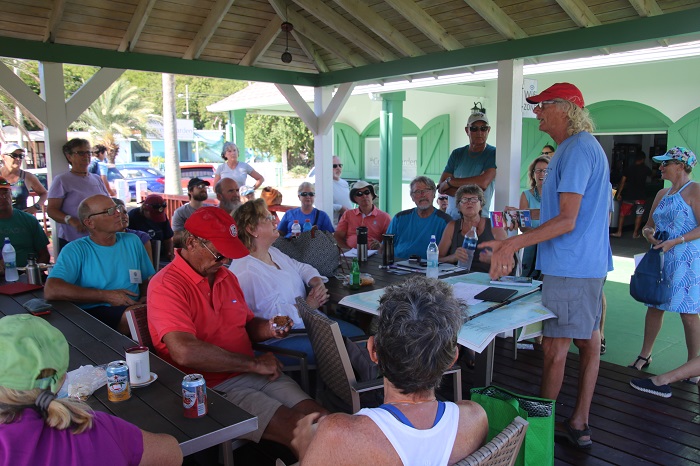 This Thanksgiving is also the fifth “anniversary” of our meeting Maureen and Bill who we first got to know at a Thanksgiving event in St Mary’s GA.   After that we “buddy-boated” with them further down the Intra Coastal Waterway and even celebrated Brenda’s birthday in Ft Lauderdale prior to crossing over to the Bahamas for the first time.    While Brenda was sad to be away from Family for the first time, they worked hard to make it a special event for her.    This photo of that day brings back so many memories from that first year as we begin our 6th winter afloat. 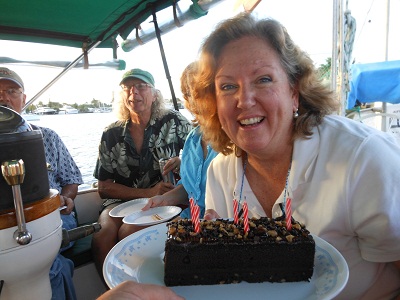 So, last night, the last “official” Dawg event that I was responsible for brought over 100 to a Thanksgiving dinner at the Antigua Yacht Club and it was fun to address, for the last time, the full fleet.  And, when I stood in front of them all and asked, and in a loud voice, “Are we coming back to Antigua?”, there was a resounding “YES” from all.

For me that was the ultimate compliment and made all the work that went into our arrival events totally worthwhile.    Well, almost as good as the peck on the cheek I got from Angie, the woman who organized a number of our events and put on a spectacular Thanksgiving feast for all the Dawgs on our final night together as a fleet as I presented her with one of our rally flags. 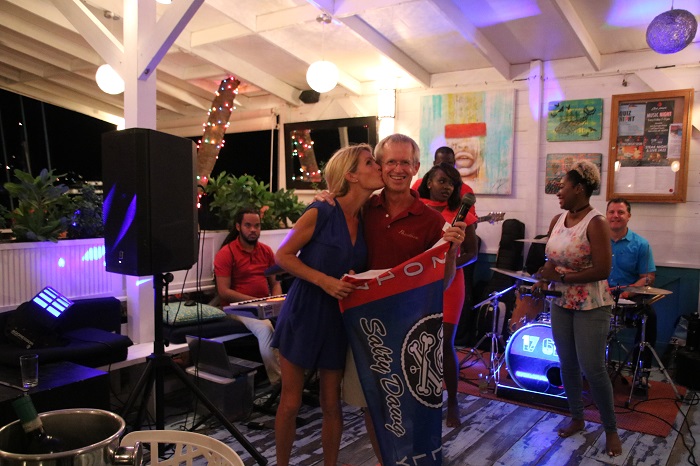 So now, back home for the holidays and our family, a wonderful way to signal the end of my role as “port captain Antigua” for the Salty Dawg Rally.

Meanwhile, all the “big girls”, the megayachts are converging on the harbor for the charter boat show that will begin in about a week.   And, it’s nice to know that even huge boats with a dozen or more crew have stuff break like this 100′ sailing yacht that short tacked into the crowded harbor yesterday because their engine wasn’t working.  I have to say that watching them tack down the narrow channel was quite a sight. 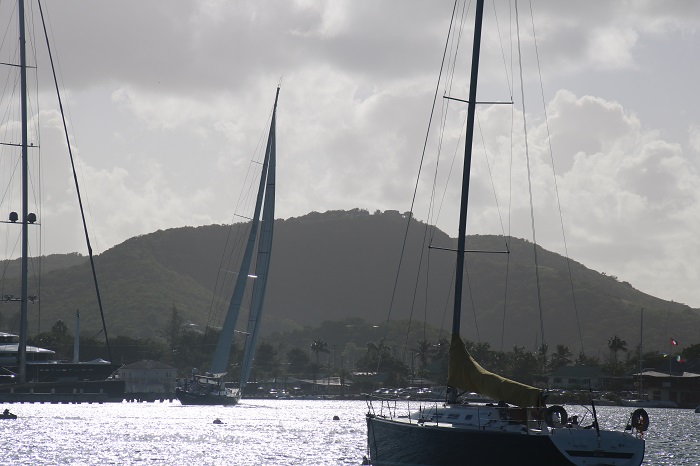 So, back to MD and then to CT we go with lots of fun stuff to come.  While we are home, I am presenting to the members of the Essex Yacht Club about our travels to the eastern Caribbean and it will be fun to present to our commodore with a burgee from the Antigua Yacht Club, a group that has been so welcoming to us.

This is AYC Commodore Franklyn Braithwaite and me exchanging burgees, signifying a formal connection between the two clubs. 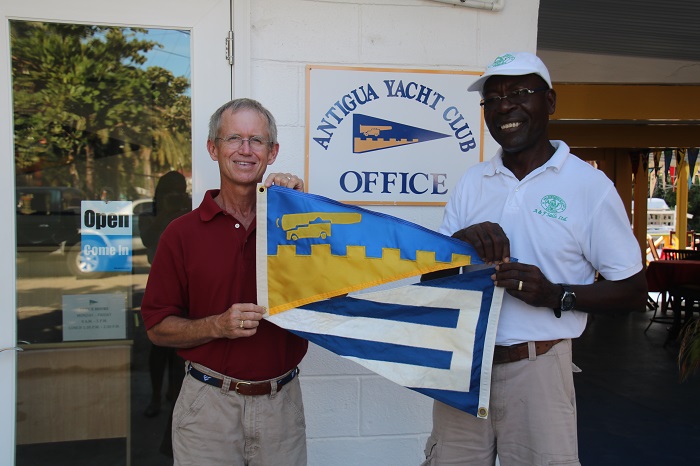 And, speaking of connections, how about this Suzuki mini truck?  It’s a “box” version of my own but it has a Chevy logo on it.  There’s no mistaking this and I am certain that it is indeed a “sister truck” to mine, “Pandora’s box truck”.

Notice that it has “unlike mine, left hand drive.   Mine was imported directly from Japan and has the steering wheel on the right. 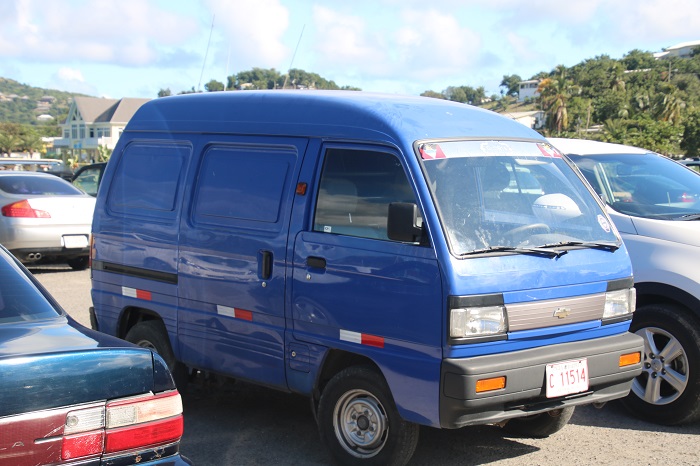 And, it looks like just another panel van until Brenda stands beside it.   Wow, little truck… 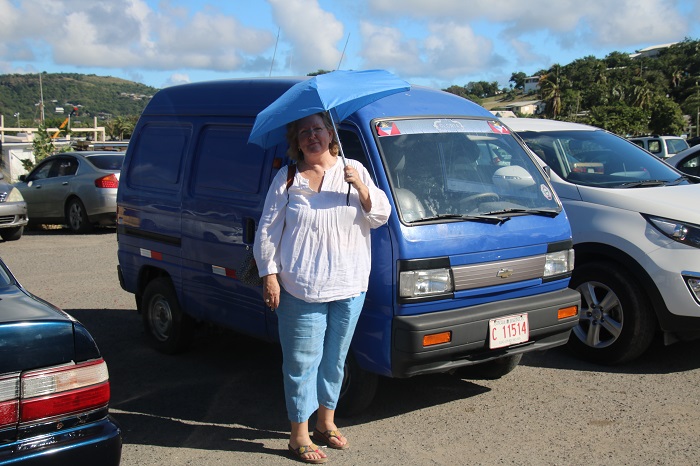 In case you’re thinking “No way, Bob, you don’t have one of those stupid trucks”, here’s mine in front of Pandora when she was on the hard up in CT. 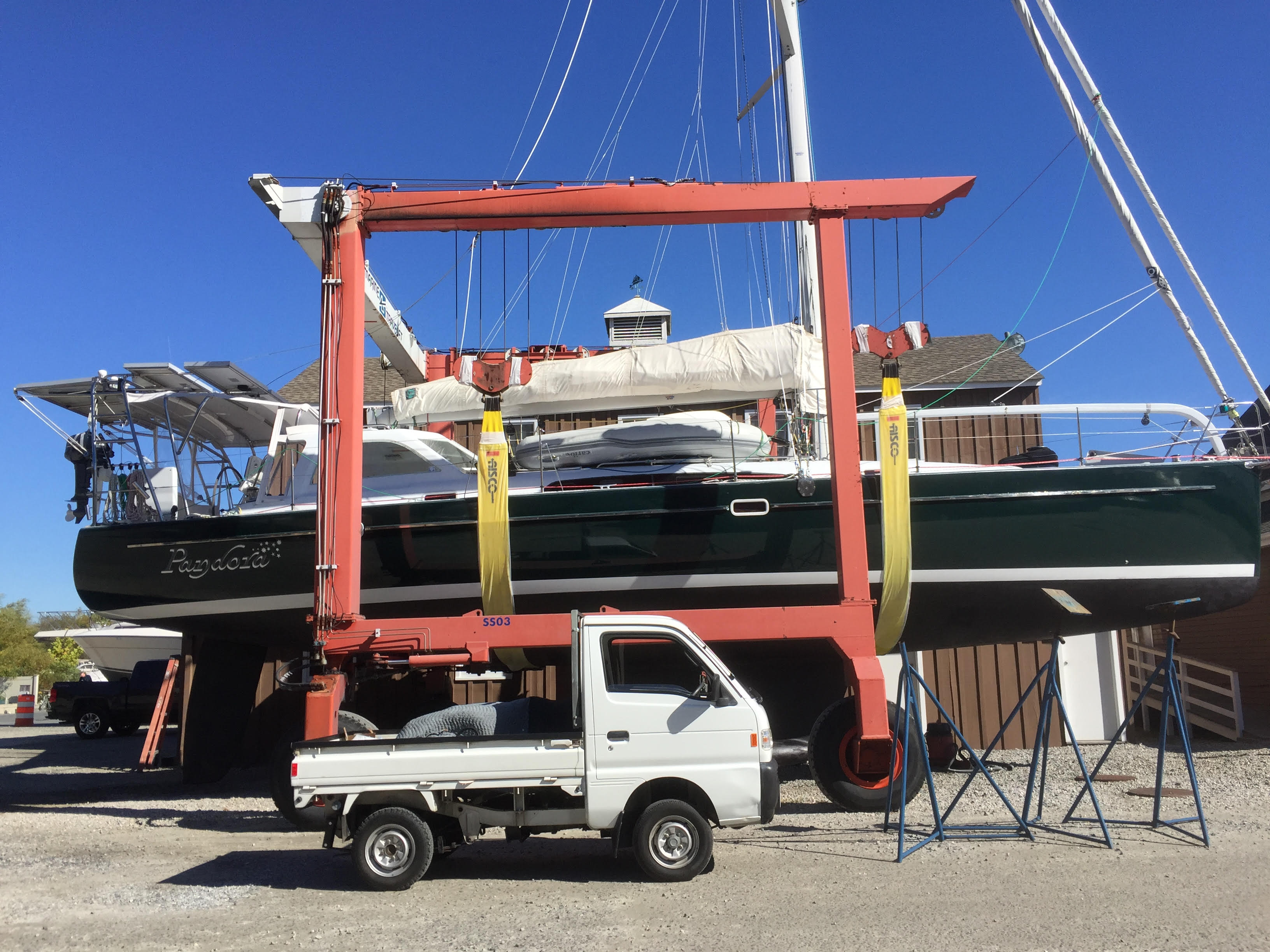 Anyway, I guess it’s time to pack as there is still lots to do to be sure we don’t forget anything.  And yes, I’m really excited to be heading home to Family.

And guess what?  Chris and his girlfriend Melody are flying back to Antigua with us to spend New Year’s.  How great is that?

And, I think it’s fitting to close this post, and signal a close to my duties as Port Captain Antigua for the Salty Dawgs, with a shot of last night’s sunset here in Falmouth Antigua. 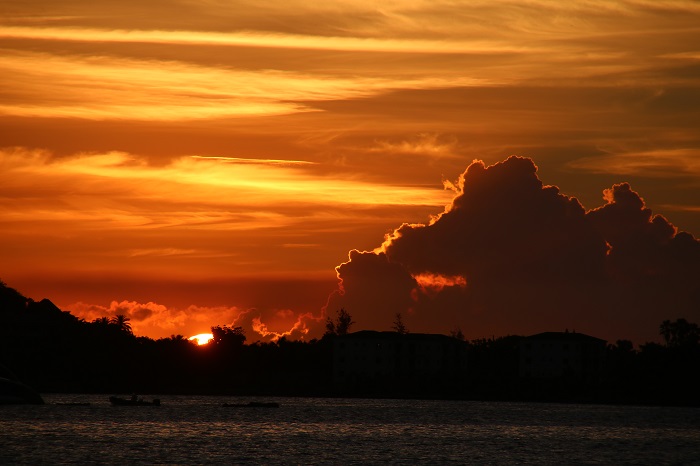 I am looking forward to our time home and also to coming back to Antigua and all the “Dawg Days” that lie ahead.