>After a great trip to Maine aboard Pandora, we are settling into a nice visit to cooler climes.  While my trip up the coast was uneventful and allowed for some great sailing, Brenda wasn’t so lucky getting here.   For some time now our 10 year old SAAB has been smoking a bit from the turbo with assurances from the garage that any failure would be a gradual loss of power and not a total engine shutdown.  Ha!  When Brenda was outside of Worchester MA last Sunday afternoon the turbo gave out in a dramatic, smoke bellowing final shudder.  While the engine wasn’t damaged, it wouldn’t run and had to be towed to a nearby shop.  Yes, we have AAA towing.  After the diagnosis, we decided to put in a used turbo (hope that was the right decision) and get a rental car so she could continue her way to BoothBay.   By the time she got to Maine she was bushed.

Unfortunately, that’s not the end of the SAAB Saga story as when she picked up the car on Wednesday, after a four hour ride back to Worchester,  she headed out only to have the car die again.  This time things had a somewhat better outcome as after a frantic call to the garage, the preliminary diagnosis was that it was a loose vacuum hose.  The mechanic diagnosed this over the phone as the likely problem as the engine smoothed out when the AC was turned off.

Anyway, the car’s not completely well yet but Brenda did get back, albeit a bit later than she expected last evening.  Ed took pity on her and we greeted her in the driveway with a glass of wine followed by a (late) lobster dinner and a wonderful evening with Ed, his son, daughter-in-law and their son.

That wasn’t the first taste of Ed’s lobster as we have been enjoying his hospitality here in the Oven Mouth, a wonderful spot off of the Sheepscott River near Booth Bay for the last few days.  Ed is retired and enjoys being on the water as a part time lobsterman.  At 82 Ed is an amazingly spry guy and a wonderful host.  In the last two days I have personally consumed 5 of his lobsters. 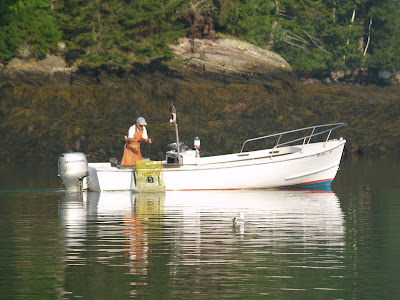 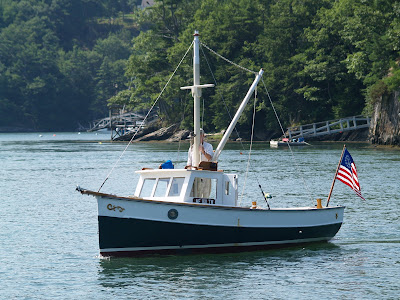 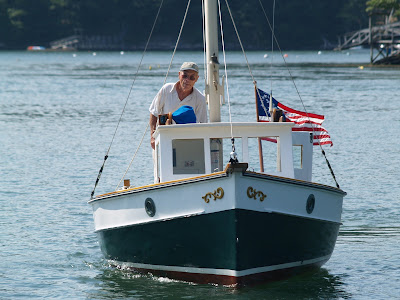 Ed also has a 1800’s vintage catboat that he has converted into a small (really small) trawler.  It’s a sweet boat with a nice little Yanmar Diesel.  Very cute. 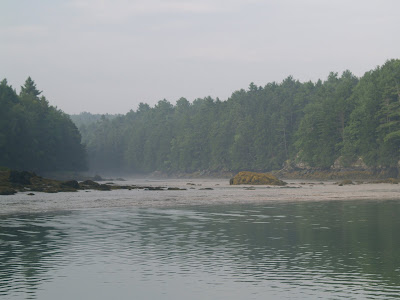 The Oven Mouth is a piece of water that is very narrow and drains a large area upstream through a very constricted rocky cut.  As a result, the currents at full tide can run upwards of 7kts.  It’s impressive to see whitecaps build as the current races by.  It’s particularly amusing to see the local duck population go by with the current without a care in the world.  I swear that they are out there for the ride. Very funny. 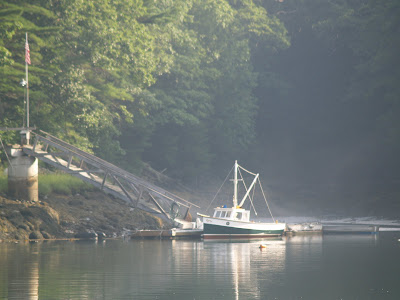 The scenery here is wonderful with the light changing on a nearly hourly basis from ephemeral mists in the early morning to the dramatic light and dark of the sun on the pine trees.  Happily, the temperatures are a lot lower now than we had experienced in Annapolis, CT and Martha’s Vineyard where things topped out in the 90s most days.  This morning I turned on the Espar heater for the first time this sailing season. It went down into the mid 50s last night.  Very pleasant.

Work has been incredibly busy with my partner developing grant submissions to both the NIH and some pharmaceutical companies with some medical society partners.  I am hopeful that things will begin picking up in a few months as some (lots?) of our requests are approved (hopefully).   Starting a business isn’t easy but a lot of fun.  Also, with the cell phone booster, fax and printer that I have aboard, it’s been very easy to stay in touch.  Each day is incredibly busy with scheduled calls and lot’s to do.

I am looking forward to a cruise with The Corinthians this coming week when I can put work aside (mostly) for a week. 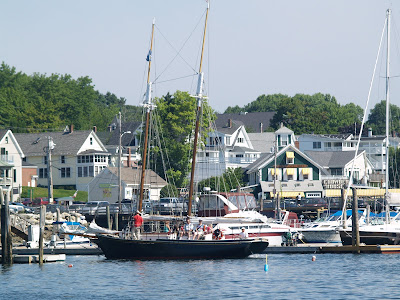 I should also note that if BoothBay Harbor isn’t on your list for a visit, it should be.  Yes, there are lots of tacky t-shirt stores, but the natural beauty and friendly people are wonderful.  It’s one of my favorite places to visit by land or water. 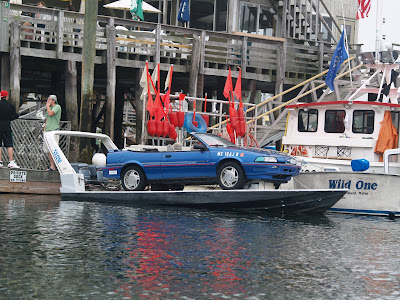 I was particularly amused by this sight as it “motored” by the other morning.  Is it a car, a boat?  It’s tacky and wonderful, that’s for sure.   I guess it’s a caboat.  No kidding, it’s steered from inside the car by wheel.  Notice the Maine registration on the front fender.  Good thing that it has a spoiler on back to help control it at speed.

On a somewhat more sublime note, this old tug motored by one evening with what looked like a very comfortable “crew” aboard.  What a nice way to enjoy a cocktail cruise in BoothBay Harbor. 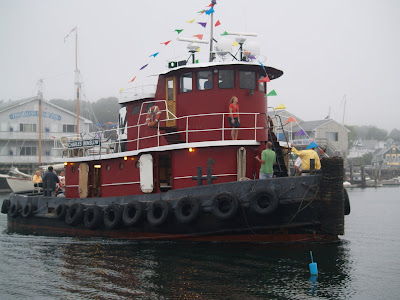 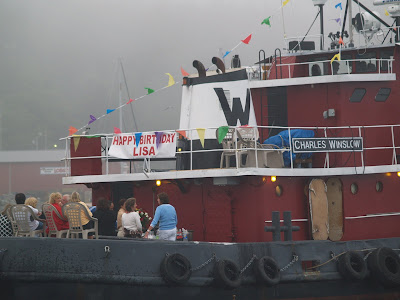