A cruise on the Onrust. Heading “Home” to the CT River Museum.

Yesterday was an awesome day.  Not only was the sun out for the first time in what seems like FOREVER, but I was invited to cruise aboard Onrust for the “last mile” as she made her way to the “summer home away from home” at the CT River Museum in Essex.

Our arrival was timed to coincide with a fundraiser event at the Museum so there would be plenty of folks on hand, 350 or so, to welcome her.   At the appointed time Brenda dropped me at the marina in Old Saybrook that had hosted Onrust for the previous night.  She looked splendid on the dock with blue sky and puffy clouds in the background. 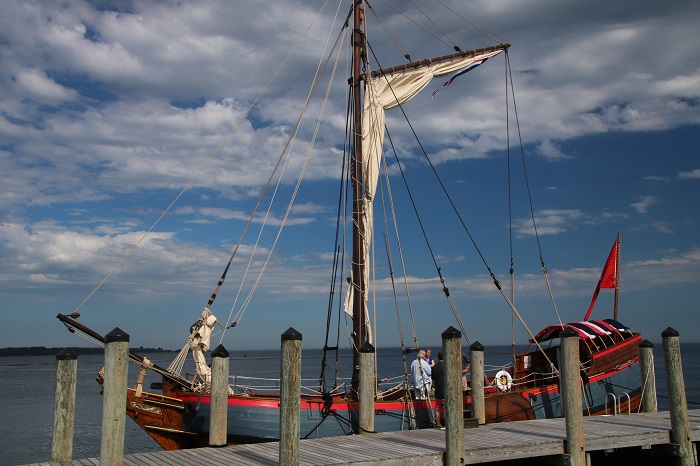 Her stern is impressive, perhaps I might call it “cute”.   Love the “colors”.    How about that braiding on the flag staff? 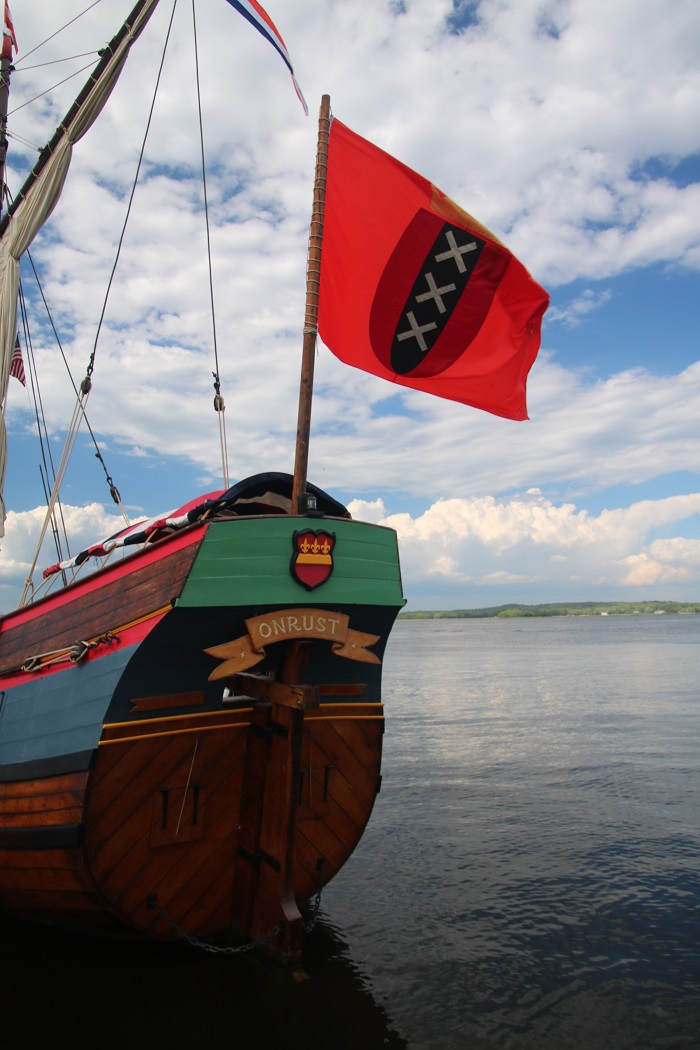 I wonder if Adriaen carved the stem as intricately as this? 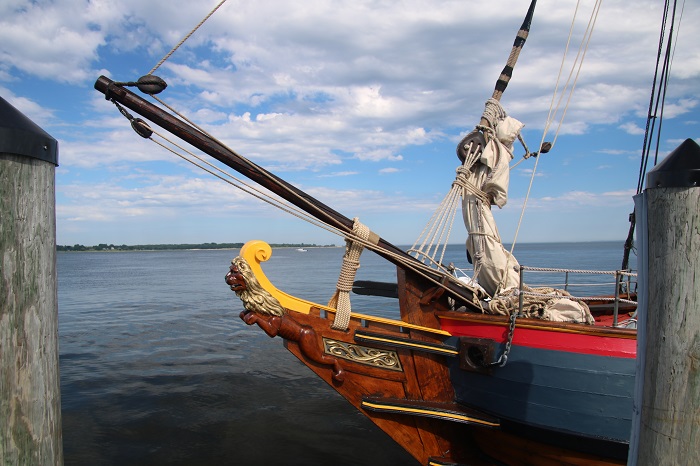 She has a nice deck layout.  Oddly, photos down below are not allowed.  Not sure why as she’s wonderfully finished below decks. 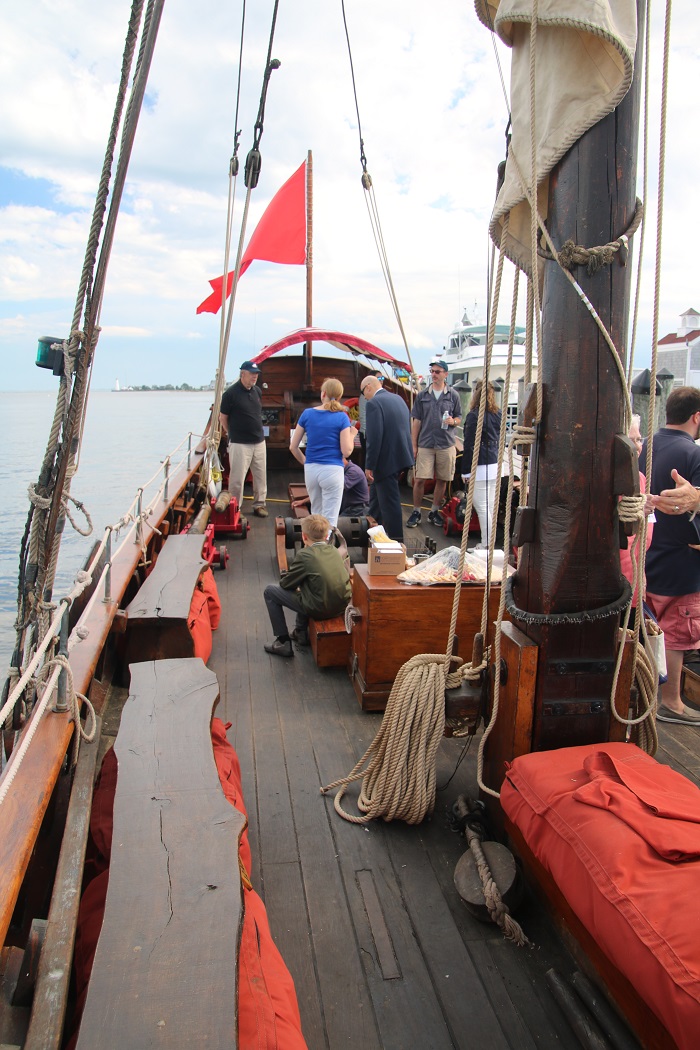 As is my custom, I made sure that I was one of the first to arrive when the boat was nearly empty.   However, by the time we left, following speeches by various dignitaries, she had a full compliment of “crew”.   The guy with the blue cap and pink pants is Tom Wilcox, president of the CT River Museum BOD, welcoming everyone.  Tom used to be the director of the Maritime Museum in Bath Maine and is a wealth of knowledge on marine history.   That’s a great museum too, BTW. 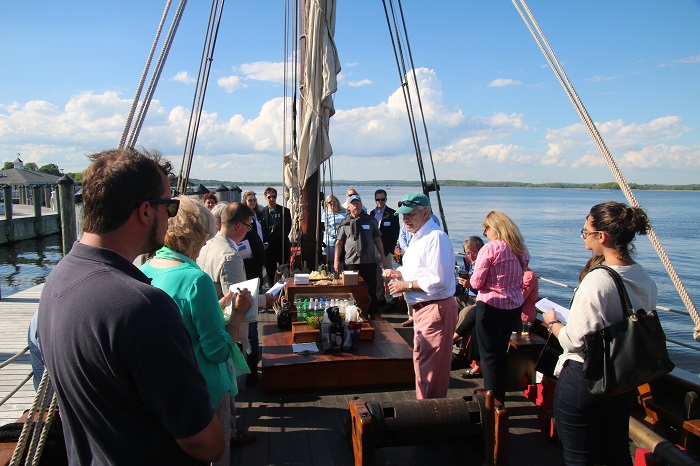 I particularly enjoyed the remarks by the “official” CT State Historian, Walter Woodward.  I asked him to share his remarks with me and I’ll put them up in a future post.   I also asked if he gives talks and he does.  Sounds like someone that I could tap for future Seven Seas Cruising Association events.  There’s just no end to interesting people that you can meet with a little effort. 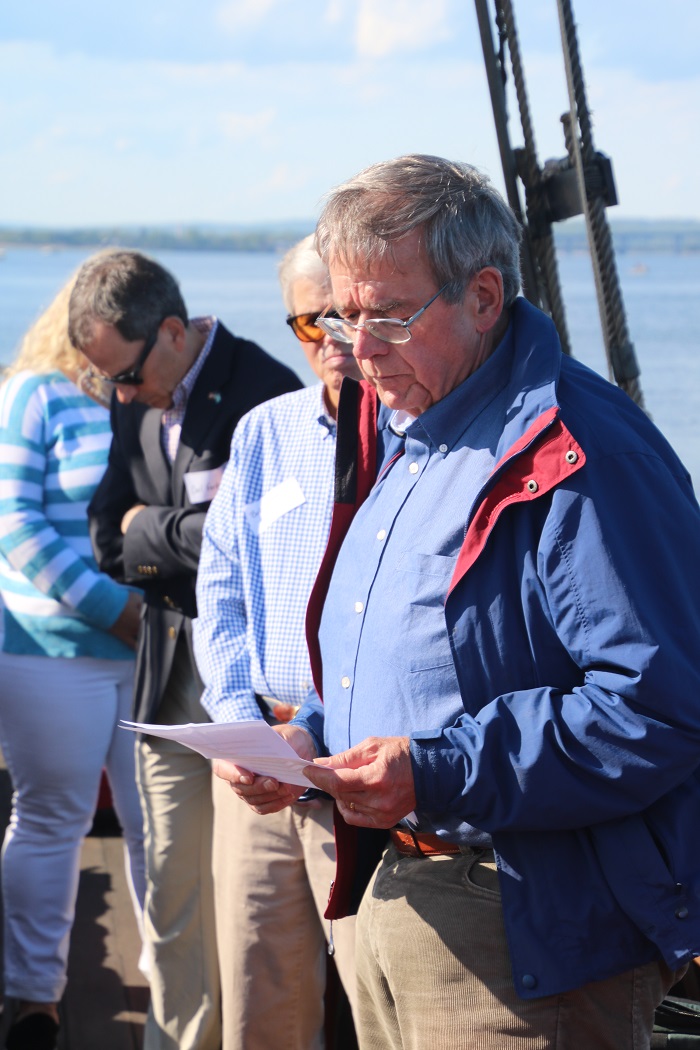 Of course, no cruise is complete without refreshments.   Fortunately, we didn’t heel enough to upset the vittles. 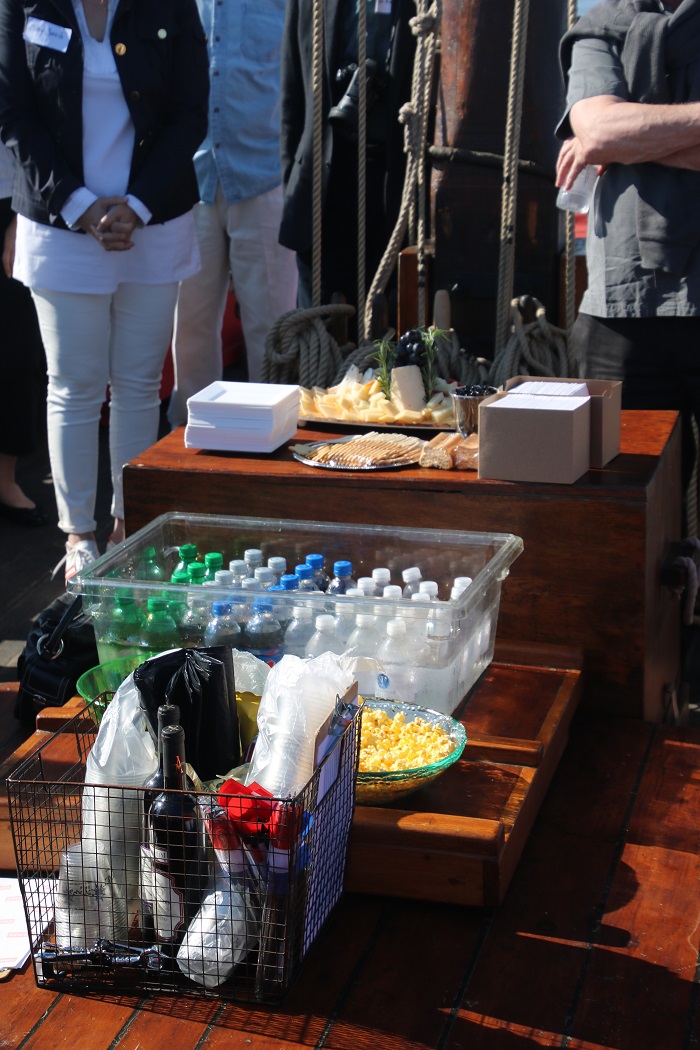 They did put up the sail for a bit but the wind was light.  However, it was a lovely sight. 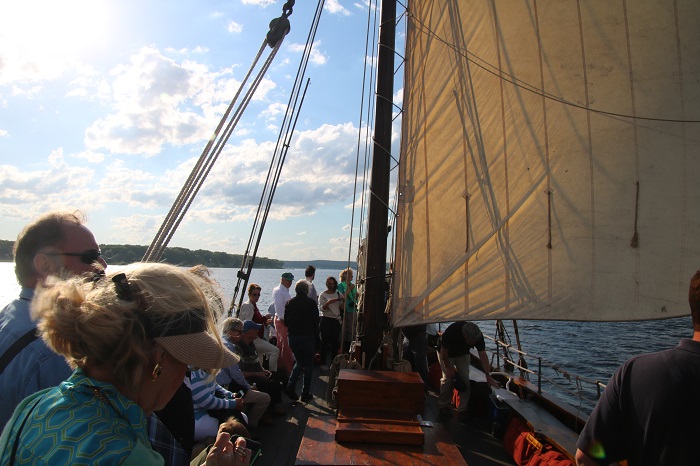 As we worked our way up the river, we were passed by this lovely traditional power yacht Deliverance.  She was built in Maine and launched in 2011.  What a looker.   It looks like her designer, drew inspiration from classic sardine carriers.  Check her out at this link.  Since launching in 2011 she has worked her way down and back on the Intra Coastal Waterway spent time in the Bahamas. 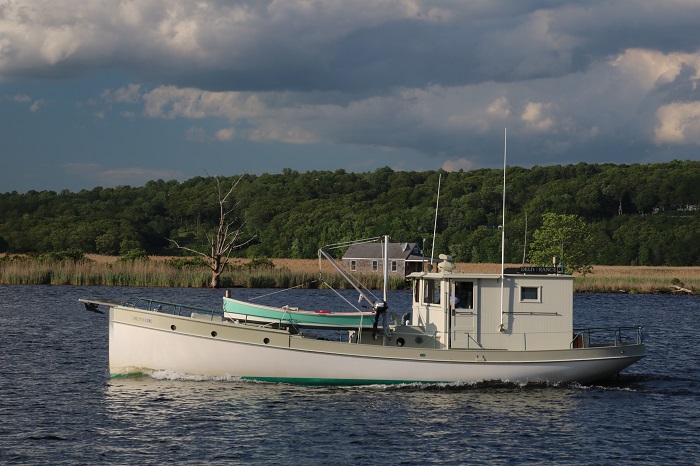 She’s a boat that would make a nice home away from home. 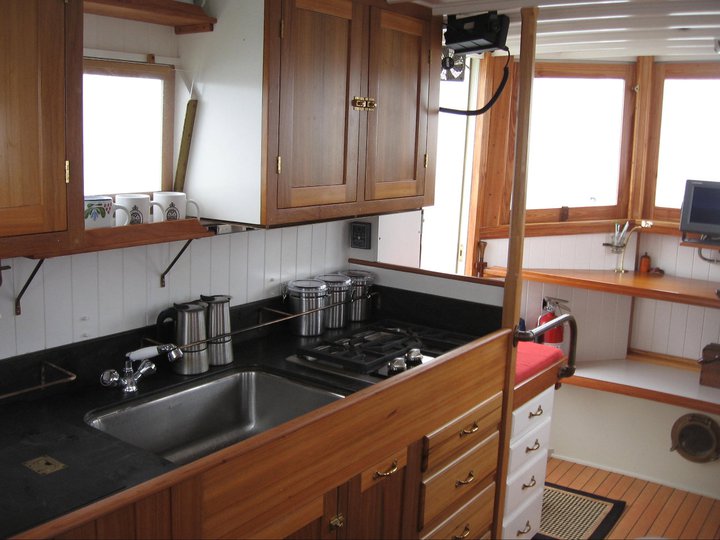 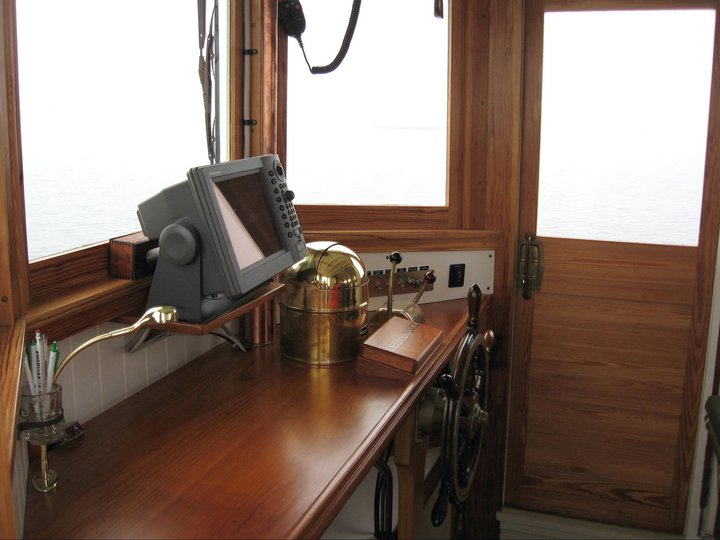 I mention the sardine carrier connection as the yard where she was built, D.N. Hylan Boatbuilders in Brooklin Maine, also did a restoration on Greyling, herself a sardine carrier converted to a pleasure boat.  I have seen her a number of times over the years.  You can see the resemblance.  Well, I can. 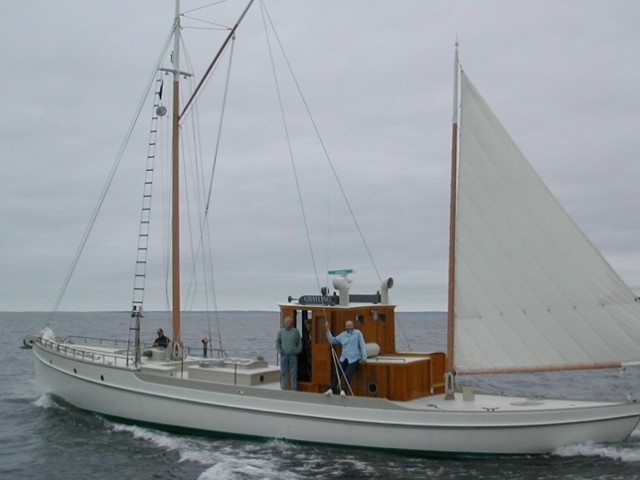 Anyway, back to Onrust.  I was thrilled to be able to take the helm for much of the run to the CRM the captain was with crew getting ready to dock and only looked to me a “few” times to be sure that I was paying attention.   My attire wasn’t particularly traditional though.   Perhaps if I hang around enough I’ll be able to get one of the “official” caps. 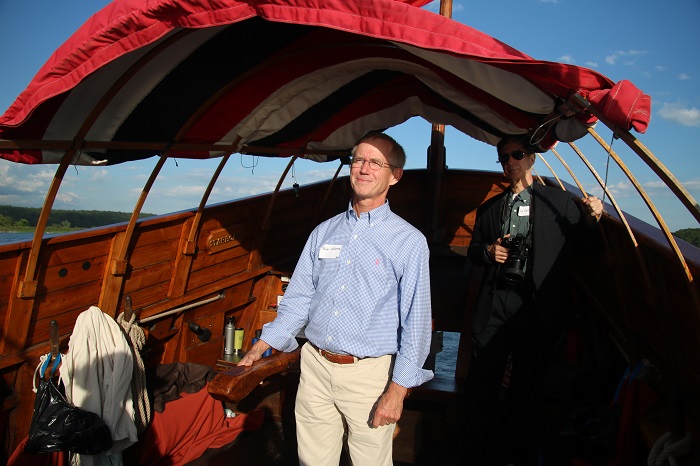 We approached the landing at the museum and were greeted by cheers from the guests. 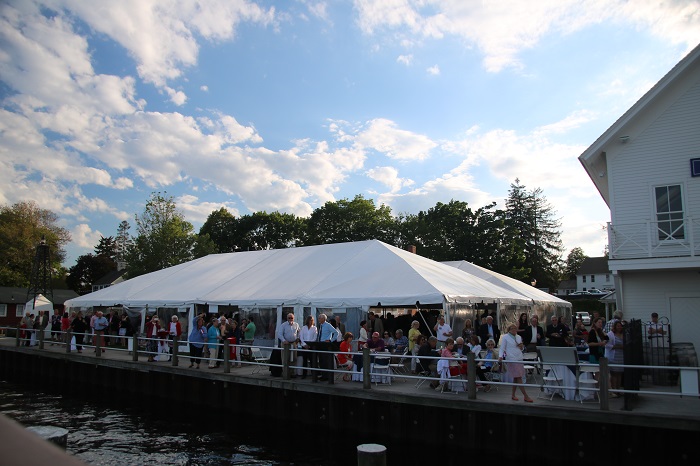 And we were serenaded by a fife and drum corp, the Sailing Masters of Essex.  I just loved their uniforms which are fashioned after those worn by the United States Navy during the period of 1810-1815.  Very natty. 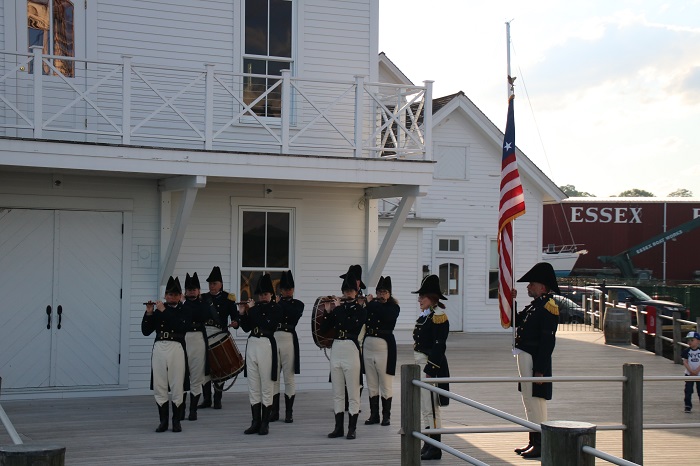 Later they posed for photos aboard the Onrust.  What a sight.  “Land ho!”  No, make that “Essex ho!”  “All hands to battle stations.  Run out the cannons!” 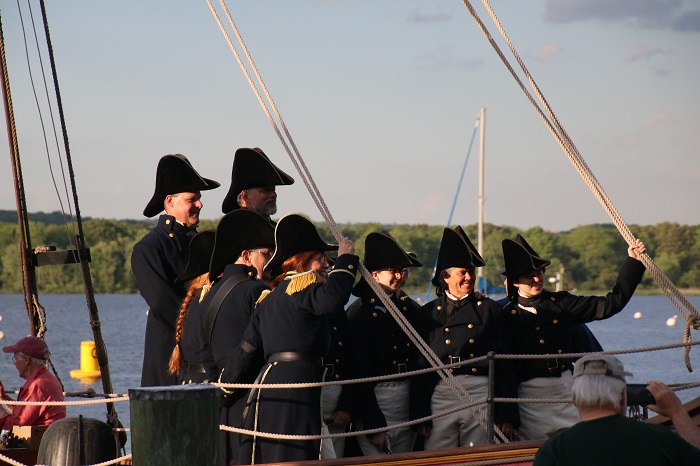 So, there she is, on the docks at the CT River Museum where she will be stationed for the summer, giving tours of the local waterfront.   I think she’s found a good home and am really impressed with Chris Dobbs, the director of CRM for making the connections that brought such a wonderful vessel to Essex. 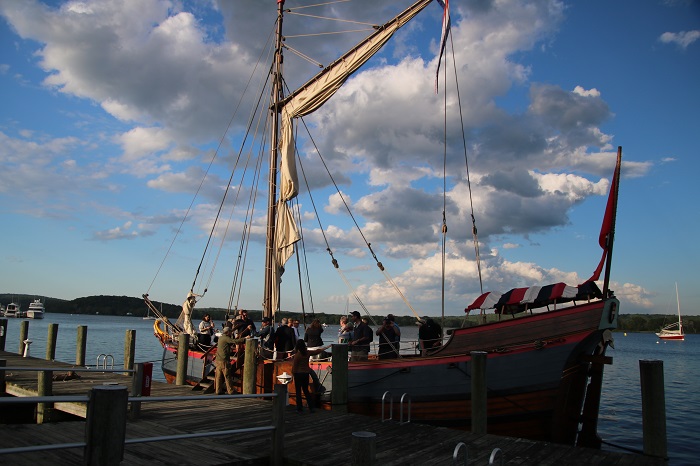 The Onrust, Essex and The CT River museum will all benefit from this wonderful new partnership and I was thrilled to be a tiny part of her arrival to her new “home away from home”.

I can’t wait to get to know her better.

2 responses to “A cruise on the Onrust. Heading “Home” to the CT River Museum.”