Well, that’s it.  Brenda caught a cab for the airport on Sunday and I am on my own until Friday when Craig arrives.  I’ll focus on Craig’s arrival as I don’t want to think about the fact that I won’t see Brenda again until the 17th when I fly to Baltimore to see our son Rob, daughter-in-law Kandice and mother of our granddaughter Tori.  I can’t wait to see them all and Brenda will be there when I arrive too.

So, here I am ALONE in Antigua, admittedly a magnificent place that I couldn’t even have imagined visiting until a few years ago.

Alone or not, I’ll just have to make the best of it by having ice cream each day and take pictures of some ot the magnificent yachts here in the harbor.   Yes, ice cream and sailing yachts.

And what better yachts to focus on than the magnificent “J” class, the America’s Cup racers from the 1930s, of which there are only eight in the world, with another three in the development/build stage right now.  Already, there are more of these remarkable racing machines in existence than was the case when they were raced for the America’s cup during the Great Depression.  There is a website dedicated to the class.    It’s worth checking out.

As I understand it, the class was revitalized by Elizabeth Meyer who funded the rebuild of Shamrock V, the first of the “Js” to be rebuilt back in the 80s.  Actually, most of them on the water now are replicas built from the original plans as the boats themselves didn’t survive.

There is a special event here in Antigua in a few weeks, the classic yacht regatta, probably the largest gathering of classic yachts in the Caribbean each year.   Antigua is also the place that many of these huge sailing vintage America’s Cup yachts make their home for the season and I think that there are 5 or so of them here right now.   In May they will head up to Bermuda to race in conjunction with the America’s Cup event itself.

Brenda and I were here for nearly a month in March and now that we are back, many of these beauties are still here.  I know that they have come and gone for other superyacht regattas in St Barths and the BVIs.

These boats, while each unique, have a similar hull shape and are not to be confused with most any other classic design.  With most over 100′ long, they are sleek and fast. 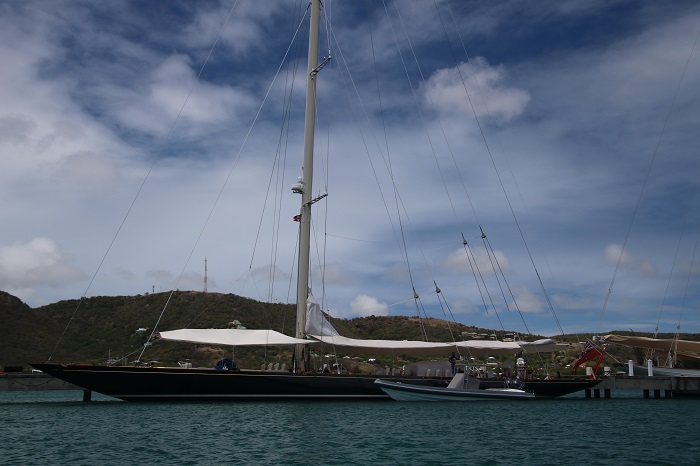 The first of the J boats to hit the circuit in modern times was Shamrock V, the only wood J sailing today.  She is wood on metal frames and was restored by Elizabeth Meyer back in the 80s, long before the huge sailing yachts were as popular as they are today.   She has beautiful copper colored hardware, all custom, I would expect. 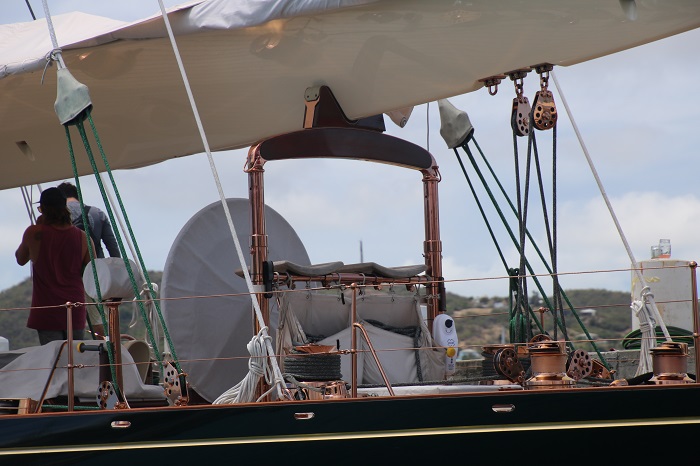 While most of them have their woodwork covered while they are at the dock, they have impressive attention to detail as does Topaz. 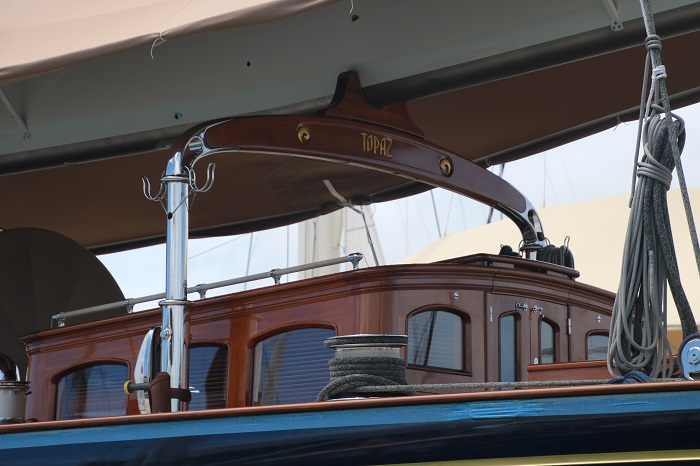 One of the boats Velsheda, has it’s own “tender” a magnificent yacht designed to look like a classic.  Bystander is it’s name, the same name as a tender owned by Vanderbilt when he campaigned a J in the 30s.  Can you imagine having the ability to have a 100′ racer and a support yacht like this? 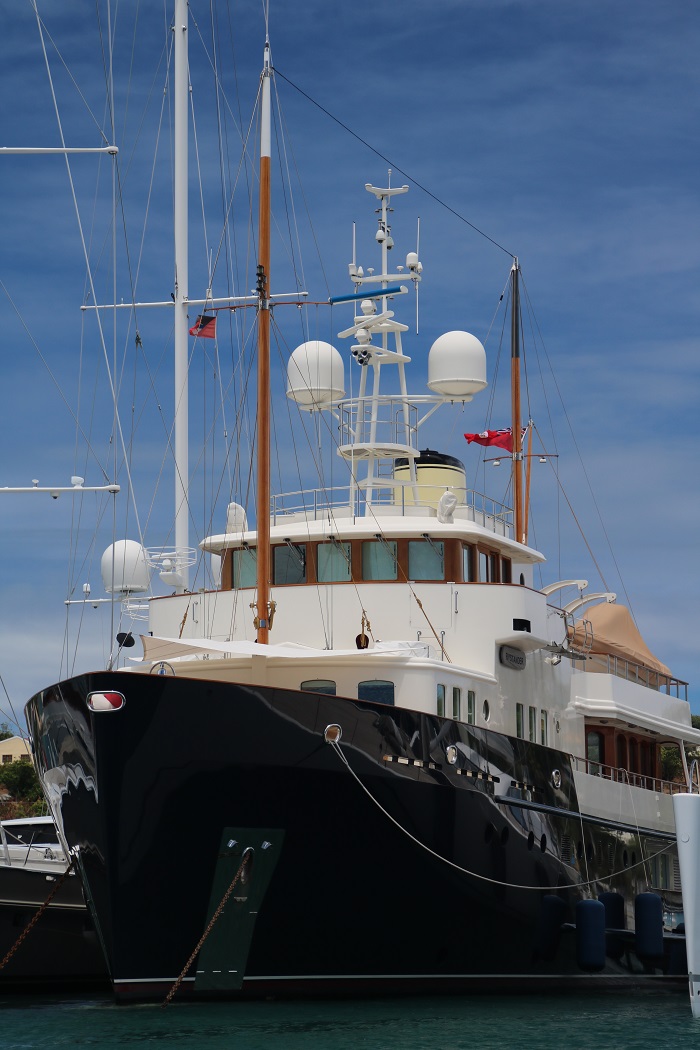 Neorion was launched in 1999 and yet looks like she might have been build 100 years ago.  She was built in the Netherlands and was completely refitted just a few years ago. 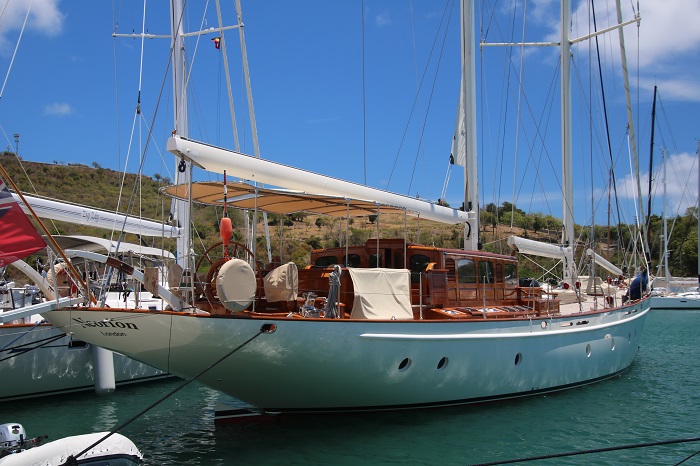 The attention to detail on Neorion is really remarkable.  You can’t let this varnish go for even a moment. 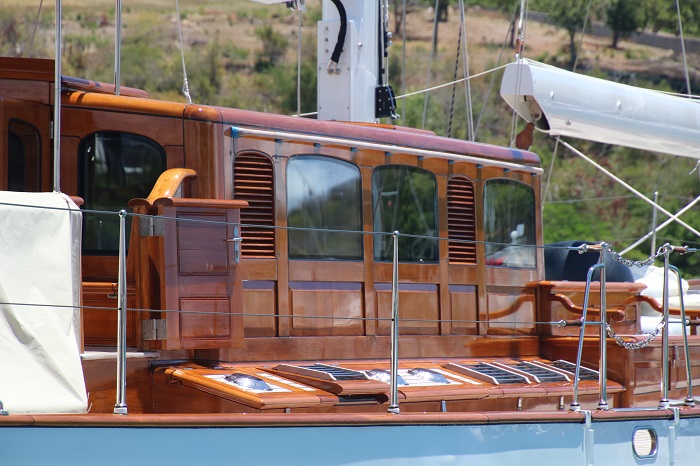 Now here’s a real looker, Adix.  She’s probably the largest boat here in Antigua right now.  She’s also new and is over 200′ long, 213′ not to put too fine a point on it.   Learn more about her here. 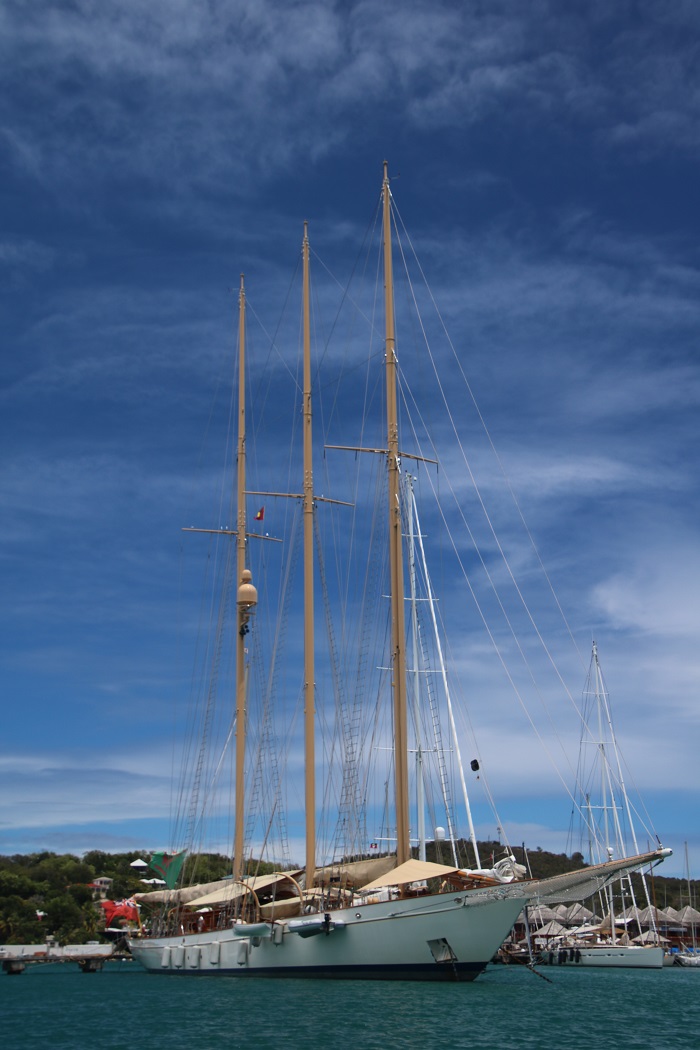 She has a number of “toys”.  Nice little daysailer.  Nice davits too. 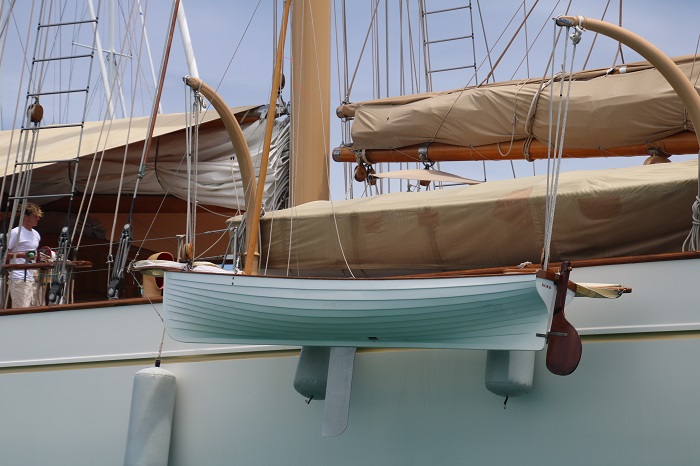 Everything about these yachts is huge.  How about the scale of the masts on this one. 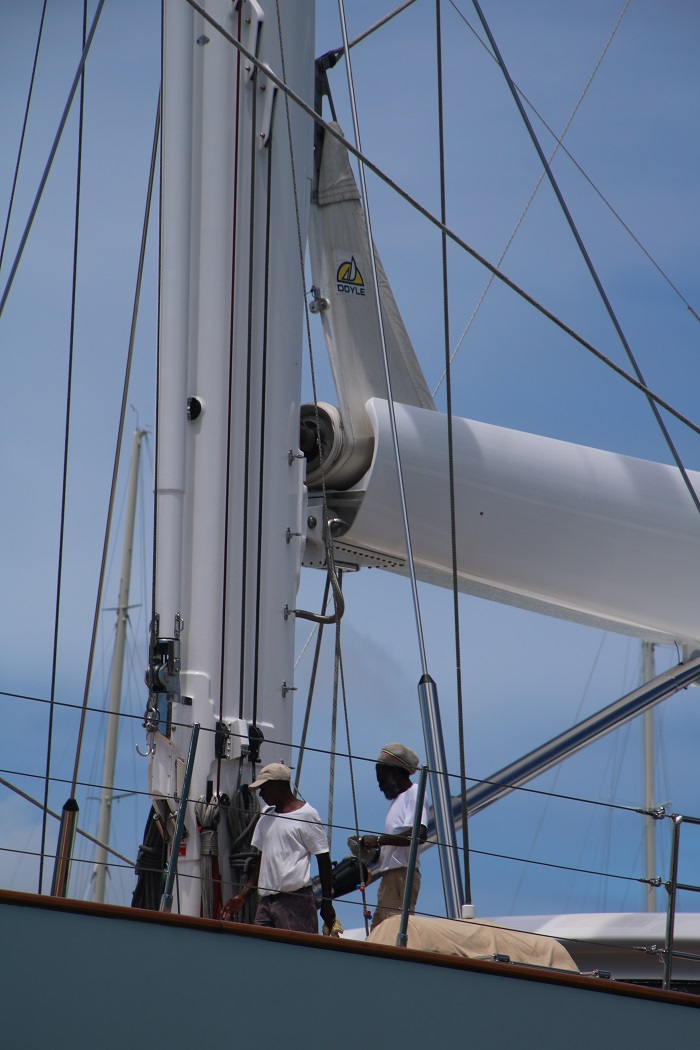 This is a Wally tender, I think made in Italy and cost, well, they cost a lot.   However, it’s peanuts compared to the “mother ship”. 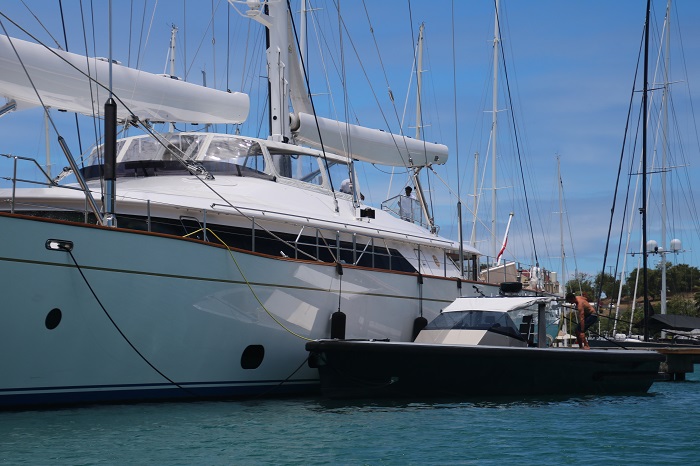 Of course, there are plenty of contemporary designs in the harbor.  I wrote about Leopard recently.  She’s one of the fastest mono-hulls in the world, capable of speeds of about 40kts.  She’s available for charter if you have the coin.   She looks fast from the bow. 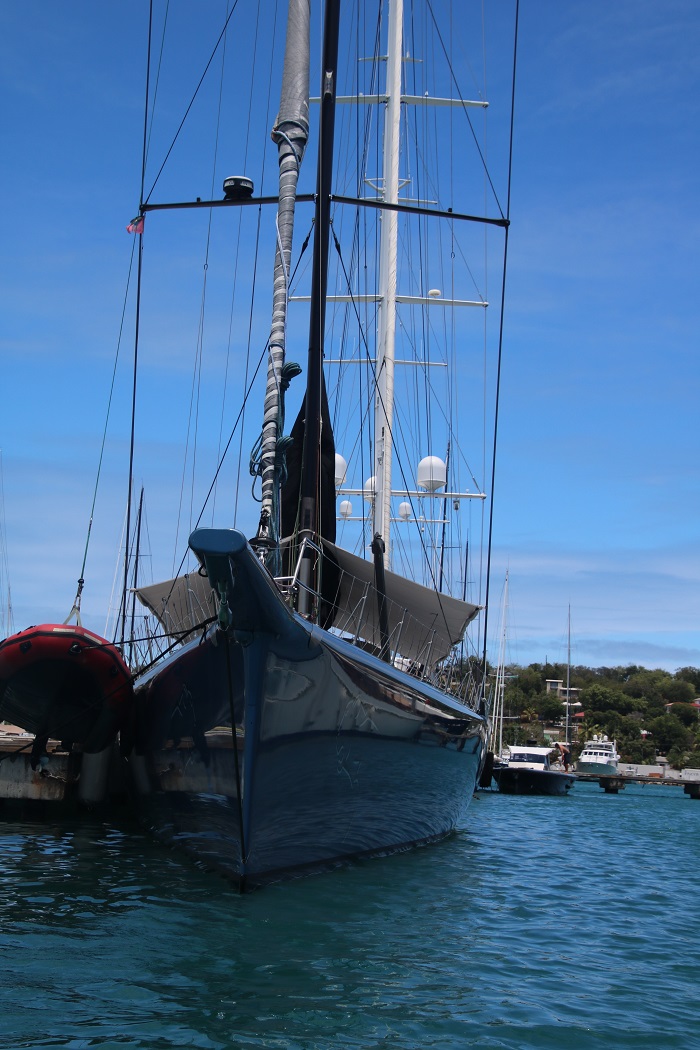 And from the stern.  All business. 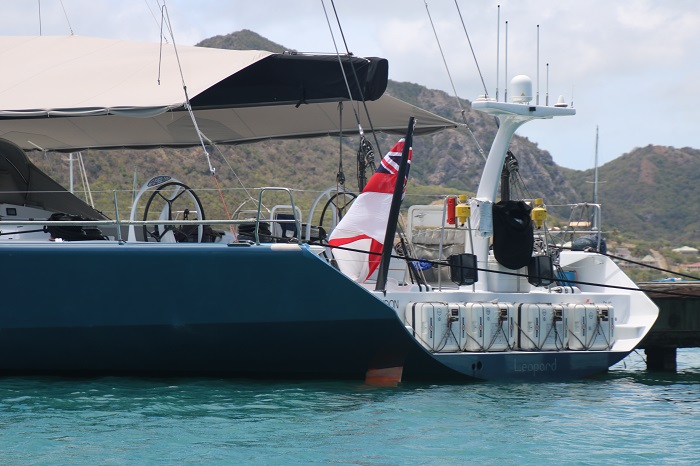 And speaking of charter, 100′ Penelope was designed for the charter business and even makes the point on her stern, “by Luxury Living”.   Check out her site. 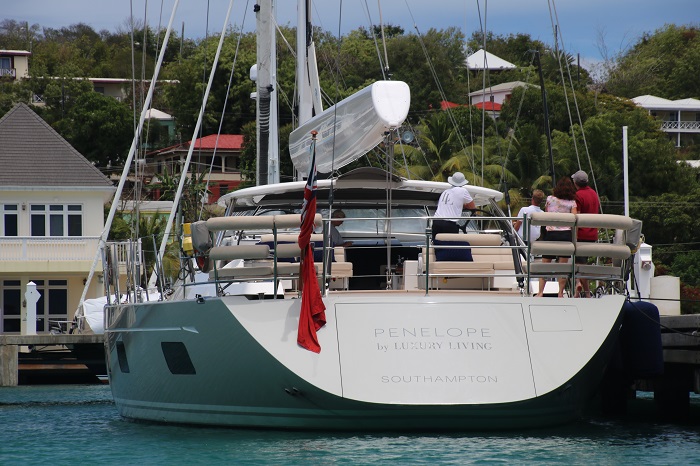 Want to charter but prefer a grey ride?   Check out Seawave. She’s fast too.  The site says that she cruises at 9kts and has a top speed of 11kts.  Pandora goes 9kts and she’s less than half as long.   Heck, skip this and go with Leopard if you want fast as she’s 4x faster.

Fast, sleek or even grey, there is nothing that compares to a classic schooner and Elena was designed by Nathaniel Herreshoff “the wizard of Bristol” in RI in 1911. Her namesake didn’t survive but the design lives on in Elena, a replica launched in 2009. 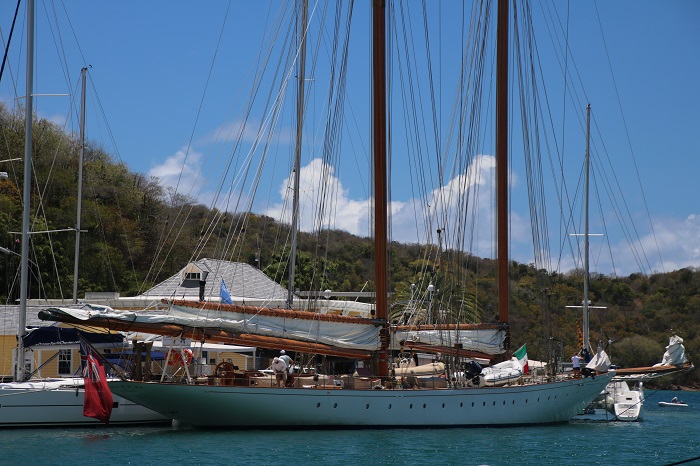 I guess that the owner wasn’t hurt too much by the recession.    Check out her site.  Lot’s of great information about this remarkable yacht.

However, classic or not perhaps the queen of the fleet here in Antigua, if age and heritage is any measure, would be Mariette, also a Herreshoff design but she’s an original and was launched 102 years ago in 1915.   What an amazing boat.    Check out some great photos and information about her history here. 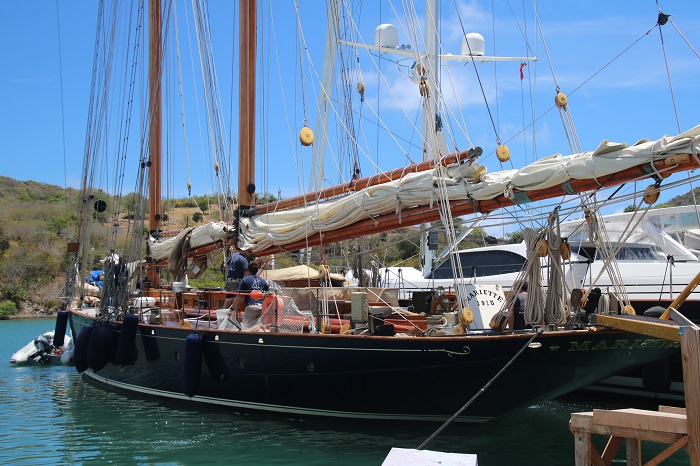 Well, I guess that’s about it for now.  I could go on all day as there are many more yachts that I have not included here.   Antigua, at least in the winter season, is home to the world’s most magnificent yachts, that’s for sure.

And what better place to view the scenery than where Brenda and I had her “departure dinner” on Sunday before she flew out for home. 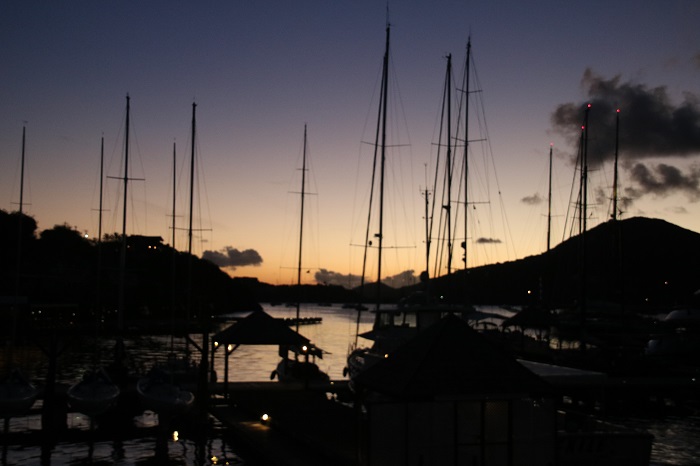 Did I mention that Brenda’s gone home?  I miss her, even if the Grand Dames of Antigua are here and she’s not.

4 responses to “Grand Dames of Antigua”