I can’t believe it.  After months of frustration, the SSB long distance radio is back and running and it feels wonderful.   This morning I was actually able to talk to someone in FL as well as Bonaire.   To be able to say “can you hear me now?” and get an answer… Perfect.

I won’t recount all of the SSB trials and tribulations but I began to have problems months ago and it finally gave up the ghost back in late January.  Unfortunately, and for a number of reasons, not the least of which was a major misdiagnosis by the electronics guy that getting everything back in order has taken a really long time.    However, it works now and that’s good.

The only thing left to do will be to wrestle with the electronics guy when he presents me a bill that will likely include time spent on “a wild goose chase” or should I say “wild mole chase” for hours, no make that several days spent hunting for the real problem.  Anyway, days before the tech came to the same conclusion, I as pretty sure that it was the tuner but it wasn’t until he and I both reached out to ICOM tech support that he finally realized that the tuner was a major part of the problem.   Oops.  Very expensive Oops.

So, here we are again in Antigua, Falmouth harbor and Brenda flies out tomorrow for home.   I am sorry to have her go but she has a conference in TN that she wants to attend so that’s that.

Our trip south this winter was shorter than normal for a number of reasons, but it looks promising that we will be able to spend more time aboard next winter which will give us the time needed to go further south and spend time exploring the Windward Islands, perhaps as far as Grenada as well as many of the islands we had to skip this year due to a lack of time.

My good friend Craig will arrive on Friday to spend a week aboard while we make a run for the BVI.  It will be a lot of fun as it’s almost assuredly a downhill run and we have plans to stop in St Barts, St Martin and then in the BVIs where he will fly home.

After a few days spent cleaning up Pandora and no doubt visiting with other cruising friends in the BVIs, I’ll fly back to the states for two weeks to spend time with our son Rob and his wife Kandice as well as our new granddaughter Tori before I head home to CT with Brenda to get our house and gardens in shape for the spring.

After all that, I’ll head back to the BVIs in mid-May to bring Pandora north for the summer.  There are plenty of projects that will need to be done on her before I head south again in the fall as well as a solid list of “land home” projects like remodeling yet another bathroom that will keep me plenty busy.

Of course, I hope to fit in a bit of cruising in New England but Pandora will have plenty of time to rest after the many miles she will have traveled during our first winter in the eastern Caribbean.

It’s remarkable that we are here, Brenda and me, after so many years of being together and I have to say that I would have never imagined that I’d  ever be in a position to say that we have now spent five winters afloat and have spent so much time heading up and down the U.S. East Coast, sailing in the Bahamas, Cuba and now the Eastern Caribbean.   Who knew?

So, back to now, today, here in Antigua.  It was great to get up this morning and see this beautiful sunrise. 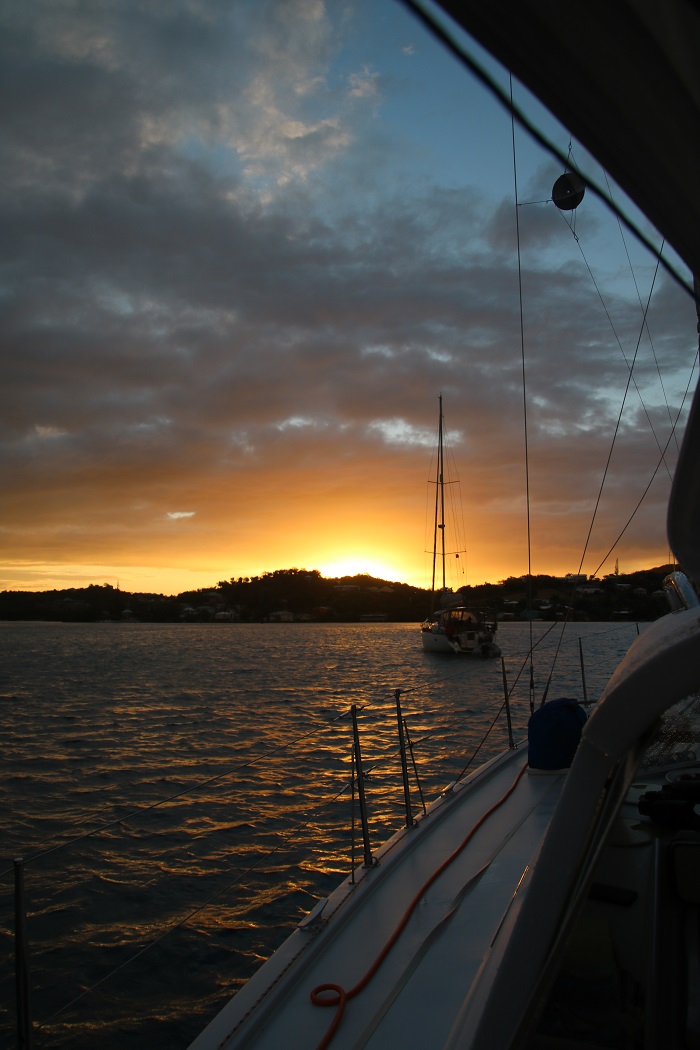 It rained a few times last night so the salt was rinsed off of the decks.  That’s good as it was pretty thick after our somewhat sporty run from Guadeloupe the other day.

One of the squalls arrived after sunrise and left a beautiful rainbow in it’s wake. 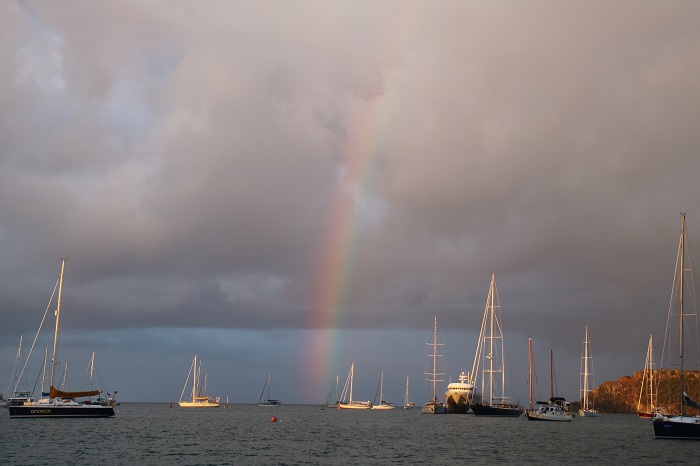 I have posted so many sunrises and rainbows, you’ll just have to trust me that these are not recycled.  Honest…really.

When we were in Les Saintes last week I was impressed with how clear the water was, even near the docks and by the number of small fish that schooled near shore.   I wish that I could take underwater shots that look this good.  These “minnows” are about 6” long and are fished for by the locals.  They are pan fried whole and eaten, I am told, like French fries.  Yum… I guess… 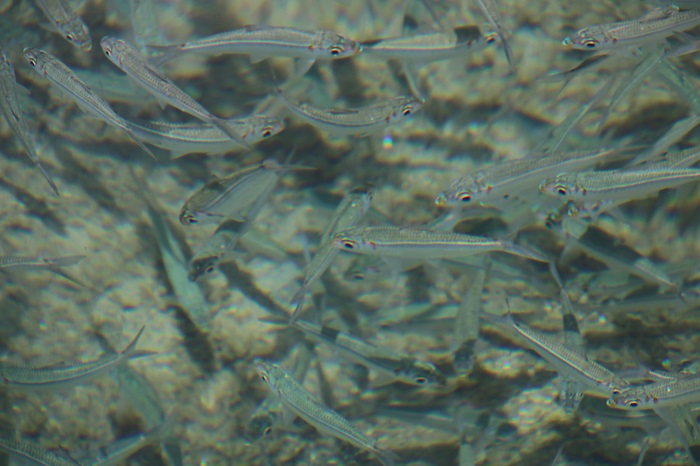 I thought that this ship/tug, military I think, was pretty neat. We saw her in a number of harbors in Guadeloupe.   I’ll bet that she can handle pretty rough seas. 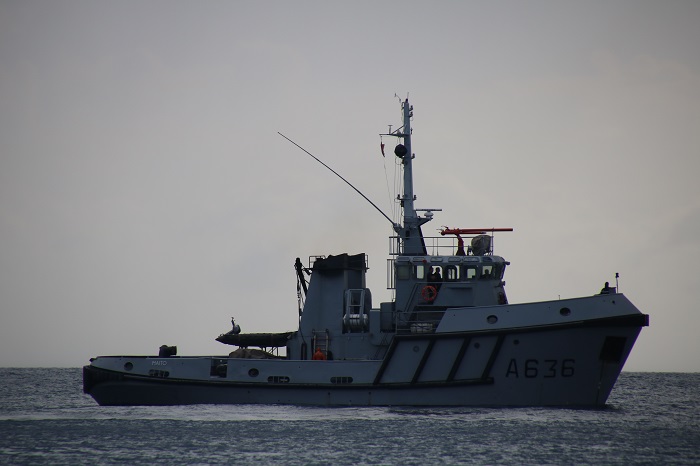 This ship, the Oosterschelde, now doesn’t that just roll off the tongue, is a three masted schooner training vessel from the Netherlands.  She will celebrate her 100 anniversary next year and is still going strong.  We have seen her in a number of harbors, most recently when she arrived in Antigua this morning.  She’s a bit rough but has nice lines. 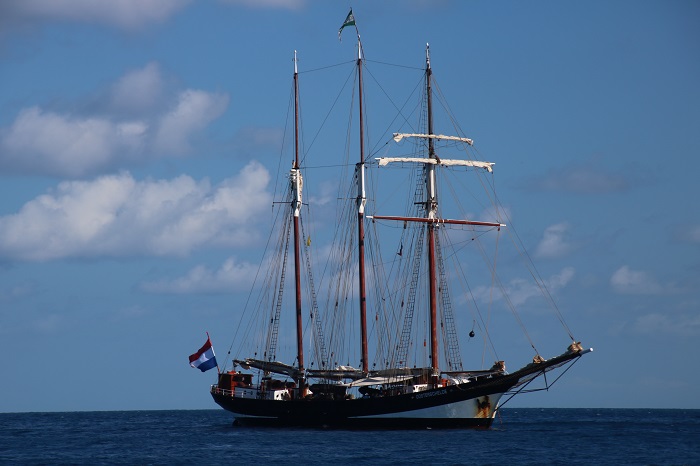 The stern is pretty jaunty, right? 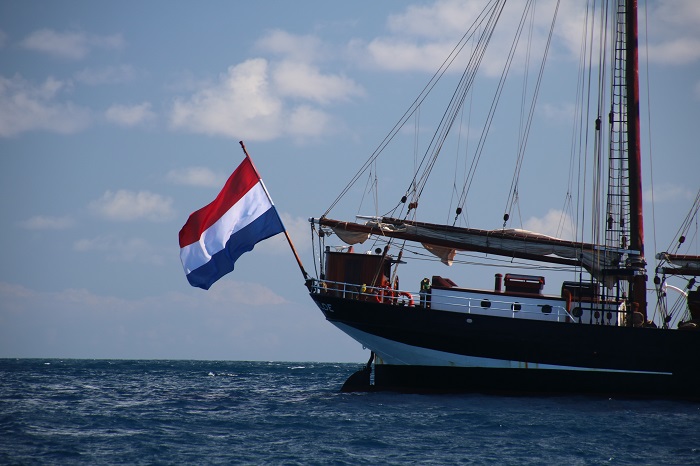 So, I guess that’s about it for now.  Brenda’s leaving, the SSB is working and I am going to be lonely, well, at least until Craig arrives on Friday.

After that, it’s north I go and back to sort of “real life”.   Let’s hope that I can keep the moles in their holes until I get back home.

One response to “SSB mole whacked and it feels great! Finally!”