It’s Friday morning and I am enjoying the sights and sounds on the water anchored near Rock Hall.   The anchorage is fairly small with room for perhaps a dozen boats.   While the harbor looks large, much of it is very shallow, less than 3′ deep, as one of the boats traveling with us for a few days discovered yesterday when they circled around to anchor and came up short on a shoal.  Not to worry though as the bottom is soft here so any groundings tend to be gentle and short lived.  Such a soft bottom does cause one to take chances such as yesterday when I cut across a shoal to take a shortcut into the harbor. The shoal was marked as 5′, a problem as we draw just under 6′.  However, we were a few hours from low tide and I gambled that there was enough water.  It was a bit of a nail biter as I logged depths under the keel of less than a foot for a good portion of the run.  We made it though.

Birdlife is abundant here too and we even saw a bald eagle yesterday, two actually, and that was a real treat.  The last time we saw one was last summer in Casco Bay Maine where they are fairly abundant.

Last evening Brenda and I were invited to dinner aboard Peregrine by our new friends Dave and Libby.   We had them over for dinner earlier in the week and they returned the favor.  They also invited the couple from Canada, Dave and Alex of Banyan.   Brenda contributed her first loaf of “boat made” bread.  We were striving for a loaf with lots of big holes and while it wasn’t perfect, it was very tasty.   To make it even better we concocted a mixture of olive oil, garlic, oil, salt, pepper and rosemary from our on board herb garden.   This “garden” lives in the dink while we are under way and on deck when in port.  There is actually a great spot just forward of the dodger where it fits perfectly.  We looked hard to find a pot that would fit there.   Perhaps I will title this photo “still life with rosemary and dorade vent.”  Does sound a bit high brow.  Well, we are on the Eastern Shore after all. 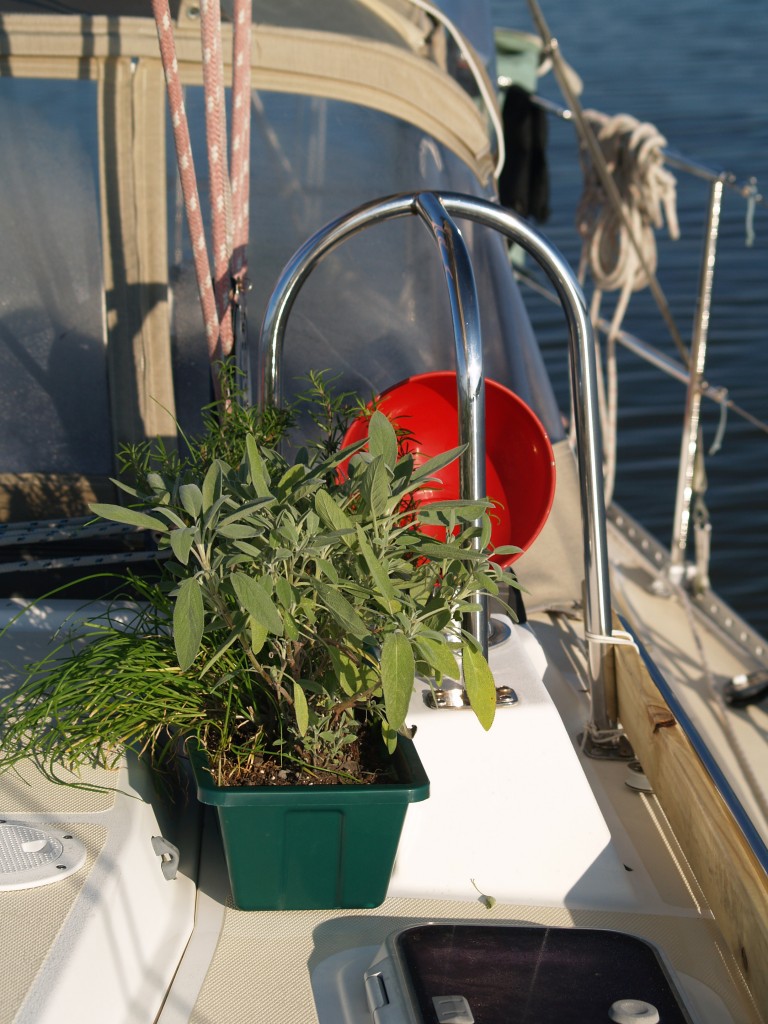 The view from Pandora is lovely, especially early in the morning. 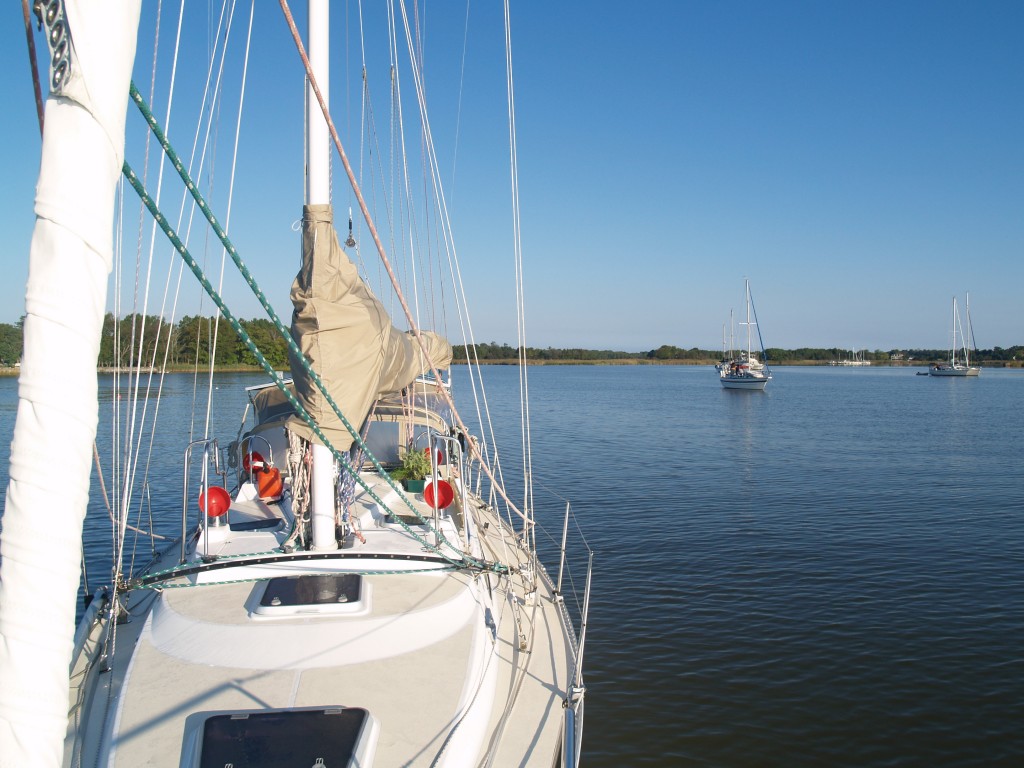 Check out the duck blind nestled into the point, in the reeds.  If you look carefully, you can see a heron standing on top of the blind. 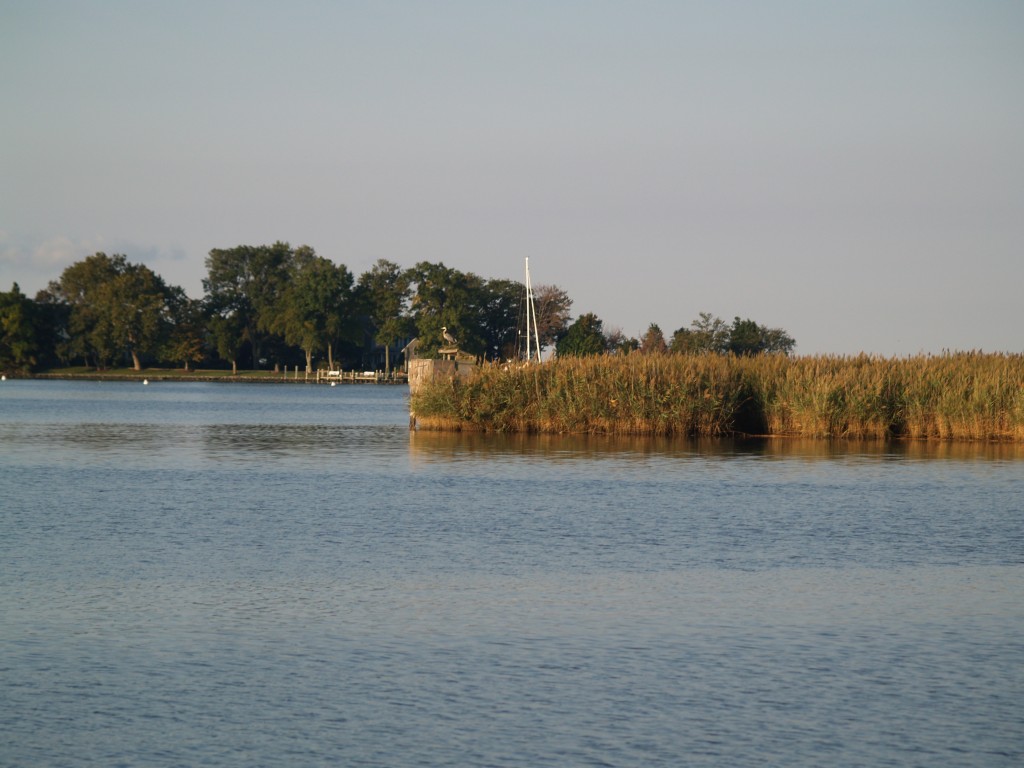 It’s interesting to see the various types of watercraft in this area and how different they are compared to those we are used to seeing in our visits to Maine.  Here, the waters are more sheltered, and a lot more shallow.  This boat, with a husband and wife team, was dragging for something, perhaps oysters.  They went slowly by several time and then pulled up the dredge.   Not sure that they had success. 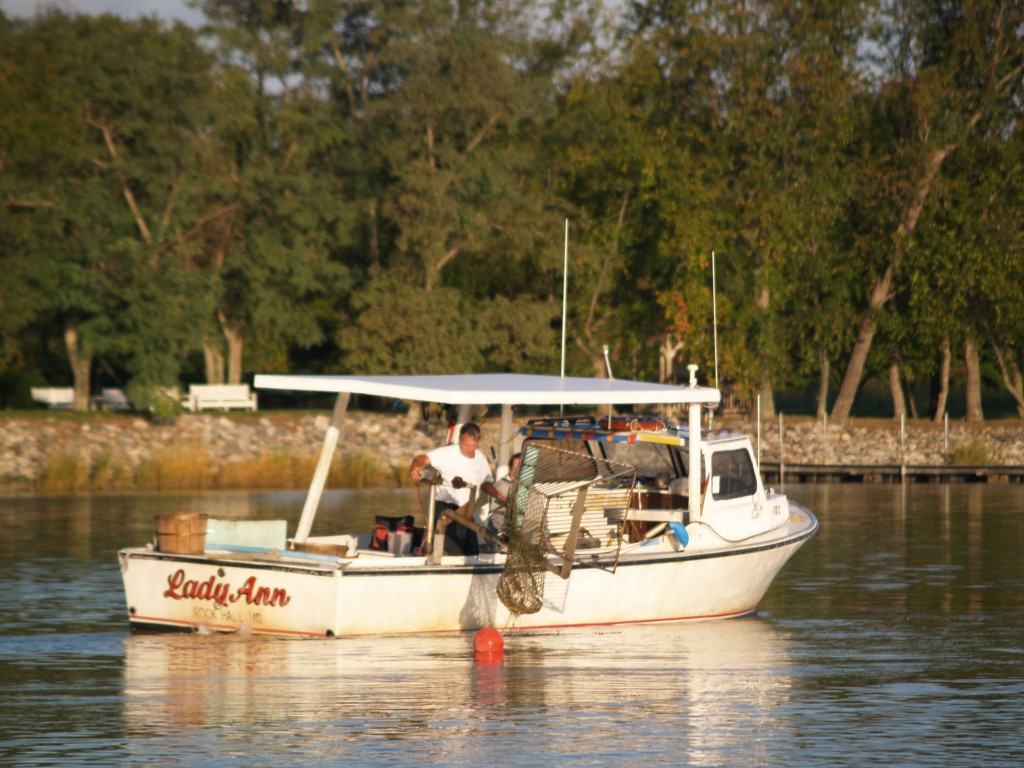 In the area of “hey, let’s put a random photo on Bob’s blog” department, erosion is a real problem on the lands surrounding the bay.  In the Sassafras River yesterday we saw this staircase, a particularly elaborate  structure that someone had built so that they to get from their home, way up on the eroding bluff, down to their dock.   I wonder how tough it was to get the permits?   It’s safe to say that it’s good example of “form following function.”    I wonder how long this will last after a few winter storms.  Hopefully, the pilings are driven down really, really deep.   Do those who grant approvals consider aesthetics?  Perhaps not. 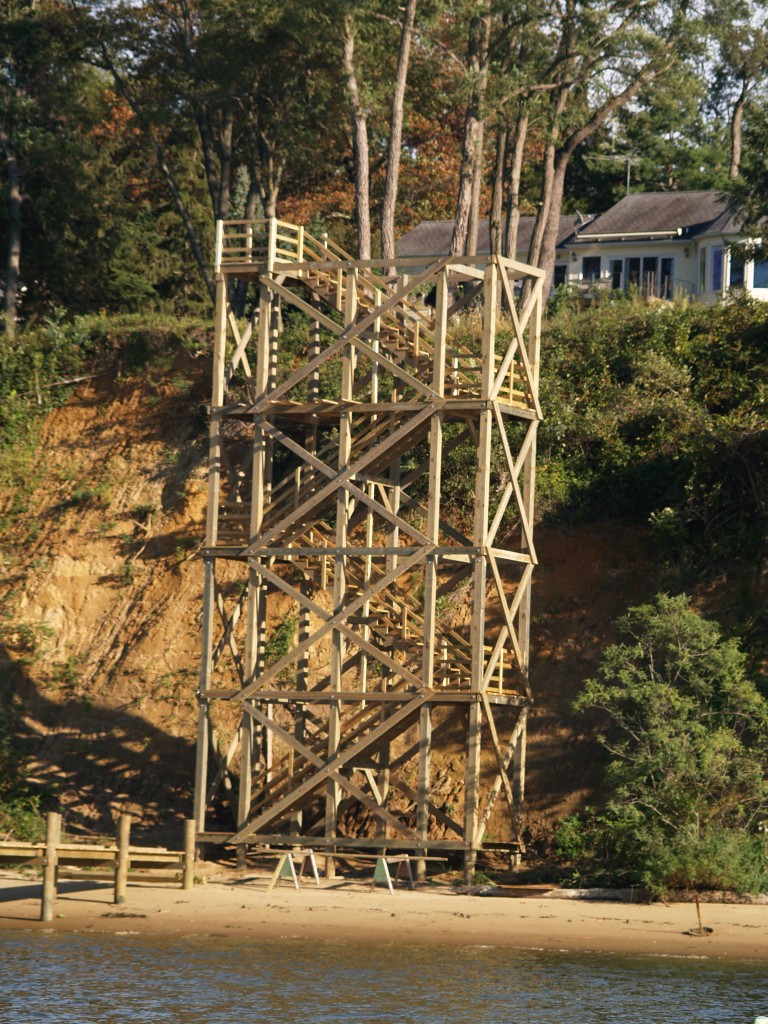 Today we will do a bit of exploring in Rock Hall and perhaps head up to Chestertown, which we hear is very pretty.    We still have a week until the SSCA gam near Annapolis.  As it’s not much more than 15 miles from here to Annapolis, we have plenty of time to do some sightseeing.

Well, typing away here isn’t giving me much of an opportunity to see the sights so I’ll sign off for now.