Tuesday afternoon and evening lived up to it’s billing with big winds plenty of rain and dramatic wind shifts.  Happily, we were well secured on our anchor and in protected waters snug in Chesapeake City.

As the day progressed, the sky became darker and it was pretty obvious that things were going to get interesting.  As it hadn’t really begun raining, Brenda and I decided to go for a walk around town.   The tide was nearly high and it was really obvious that the storm was driving extra water up the bay as the water level kept going up and up.   This photo shows just how high it got and how the surrounding parking lots near the water were completely under water. 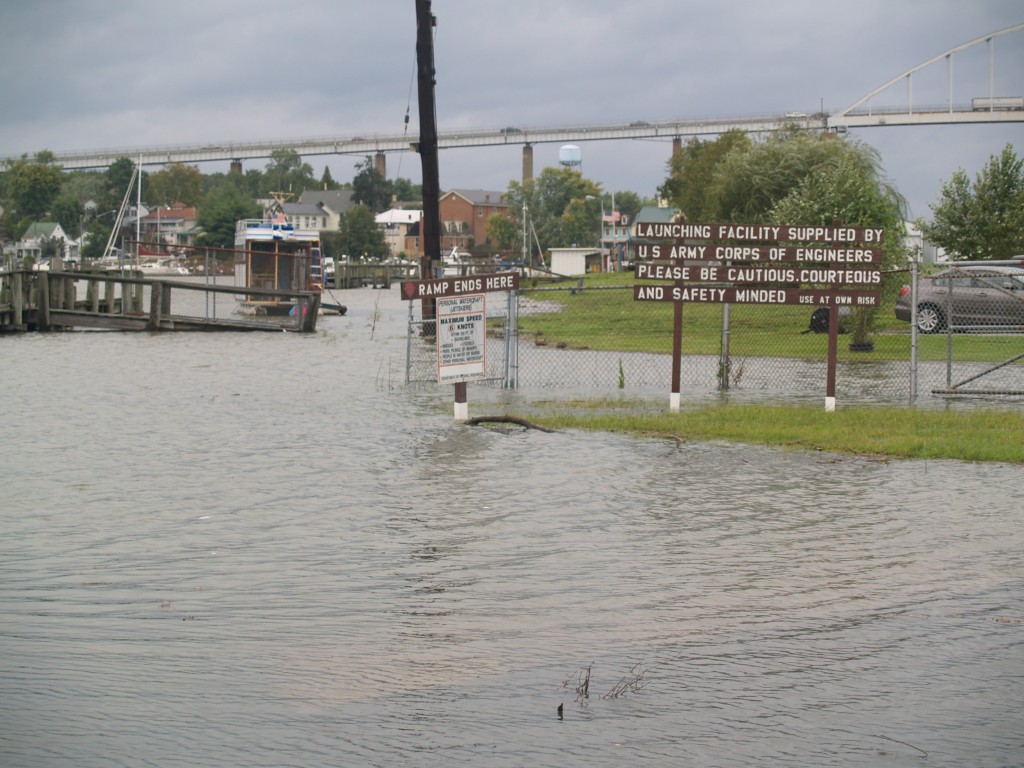 Pretty bold to leave cars in this area if you ask me. 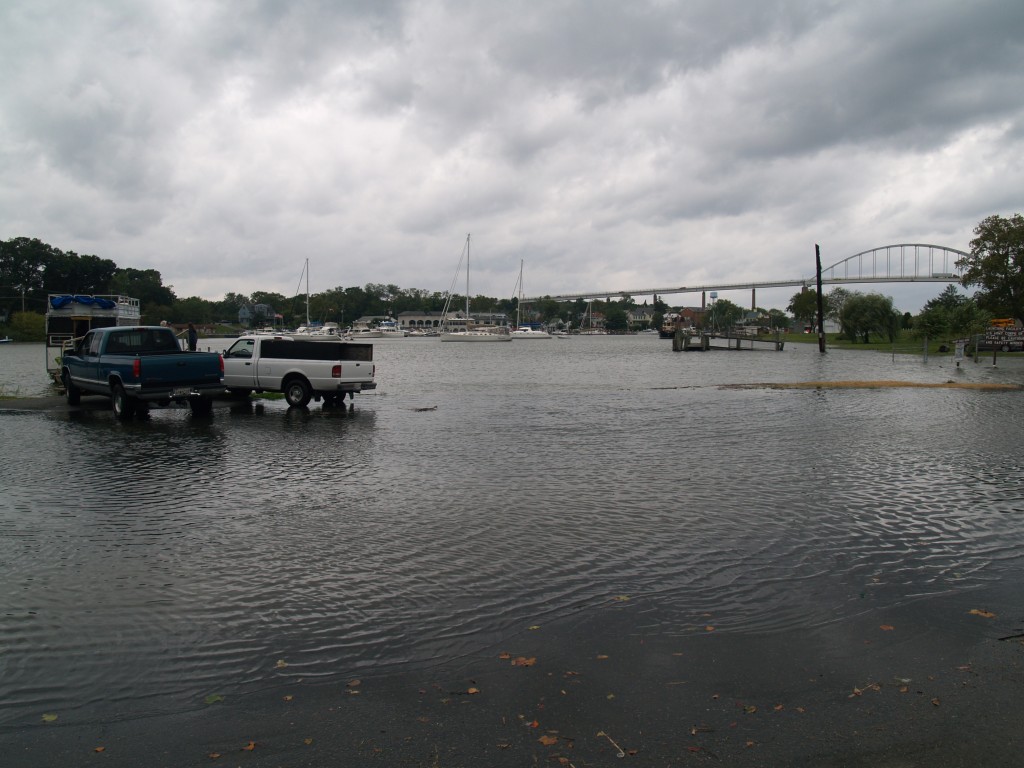 I took this photo from the cockpit of Pandora at high tide on Tuesday afternoon.  You can see just how high the tide was. 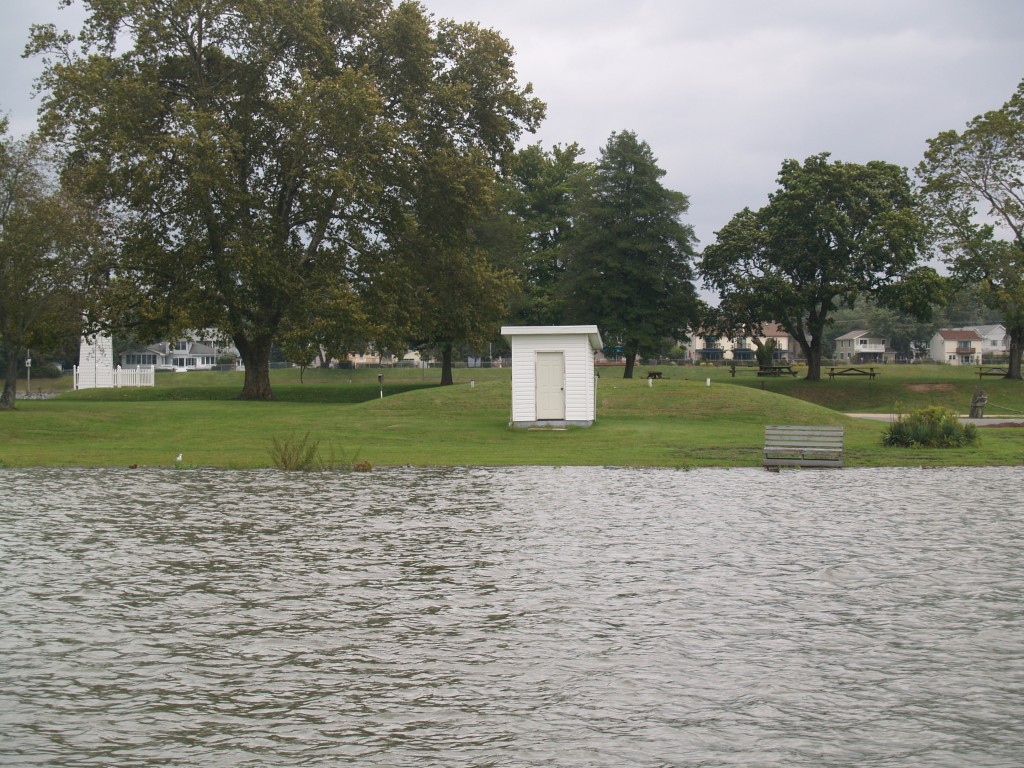 The same view the next morning at low tide.  A bit different and the normal tide range for this part of the bay is only a few feet. 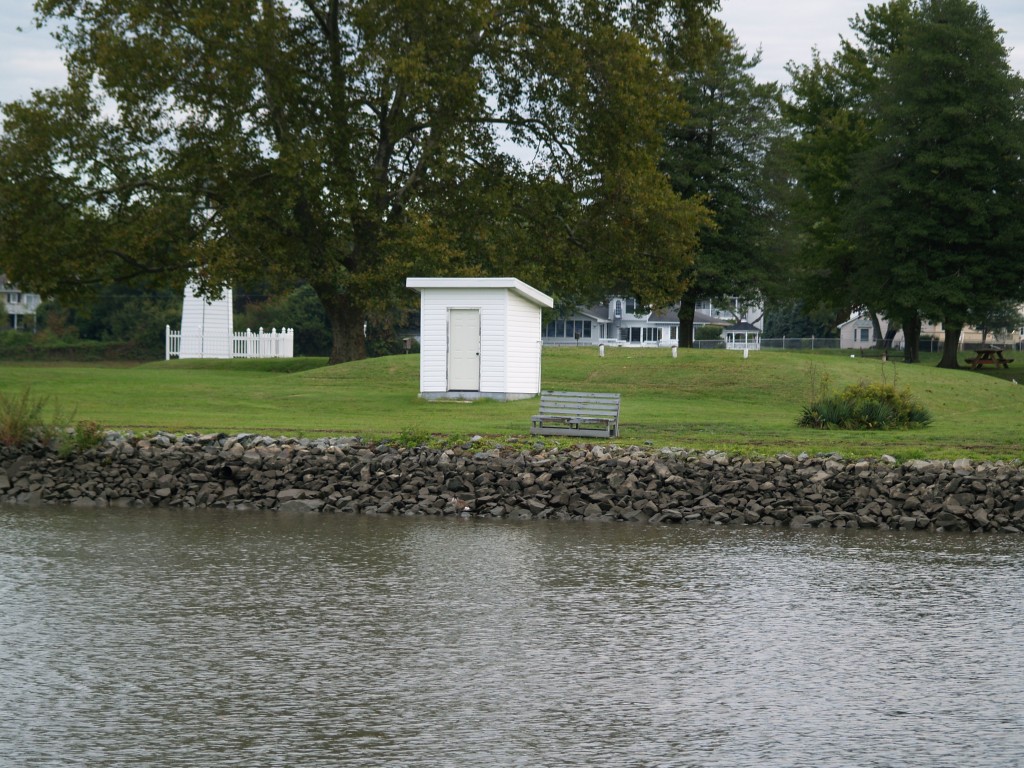 Just before the most interesting part of the storm kicked in, we were ashore and decided to stop for some iced tea.  While we were sitting at the counter, someone said “I was looking at the weather radar and we should be in for quite a show in about 15 minutes.”   Brenda and I looked at each other, paid the check and bolted for the dink which was just outside on the dock.  We weren’t looking forward to getting caught in the rain.

The wind was really picking up and about 5 minutes after we arrived to Pandora, wow, the heavens opened up.   It was really impressive.  Happily, I had plenty of scope out so we didn’t drag even a little bit.  One of our neighbors did drag and had to reset their anchor though.

This is Pandora nearly alone in the small harbor at Chesapeake City.  The view in the other direction is less pastural as it’s the town.  However, a pretty nice view in every direction. 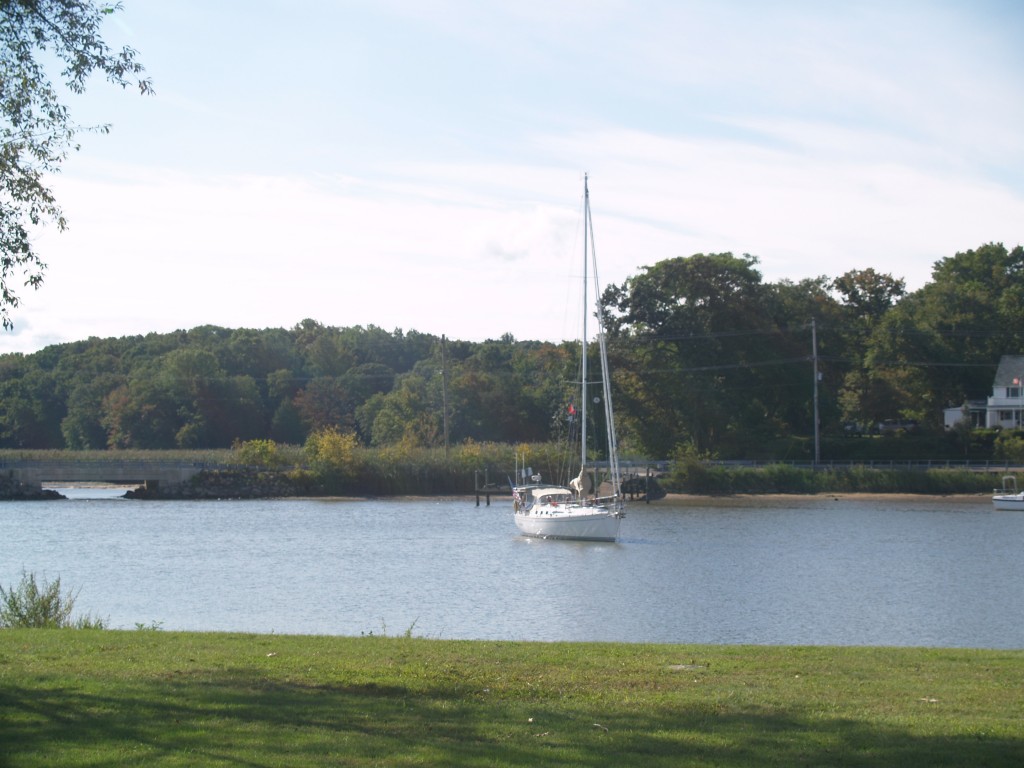 First thing on Wednesday we went for another walk down town to take in the gardens and lovely homes.  Brenda particularly liked these window boxes. 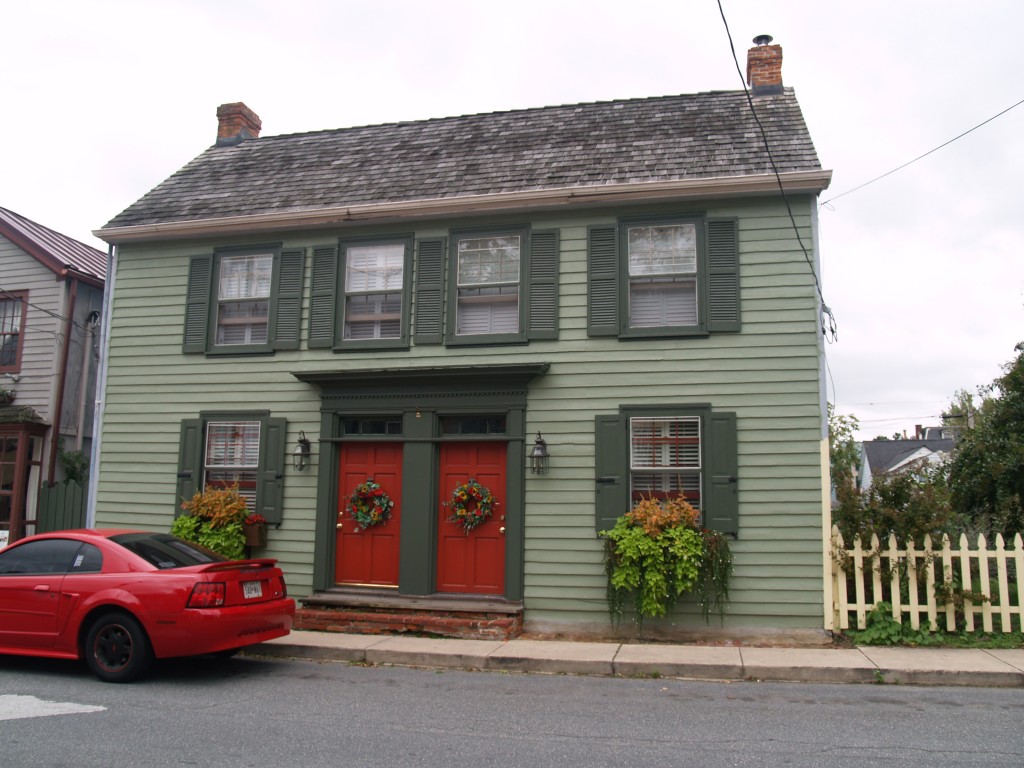 Plenty of nice gardens in town. 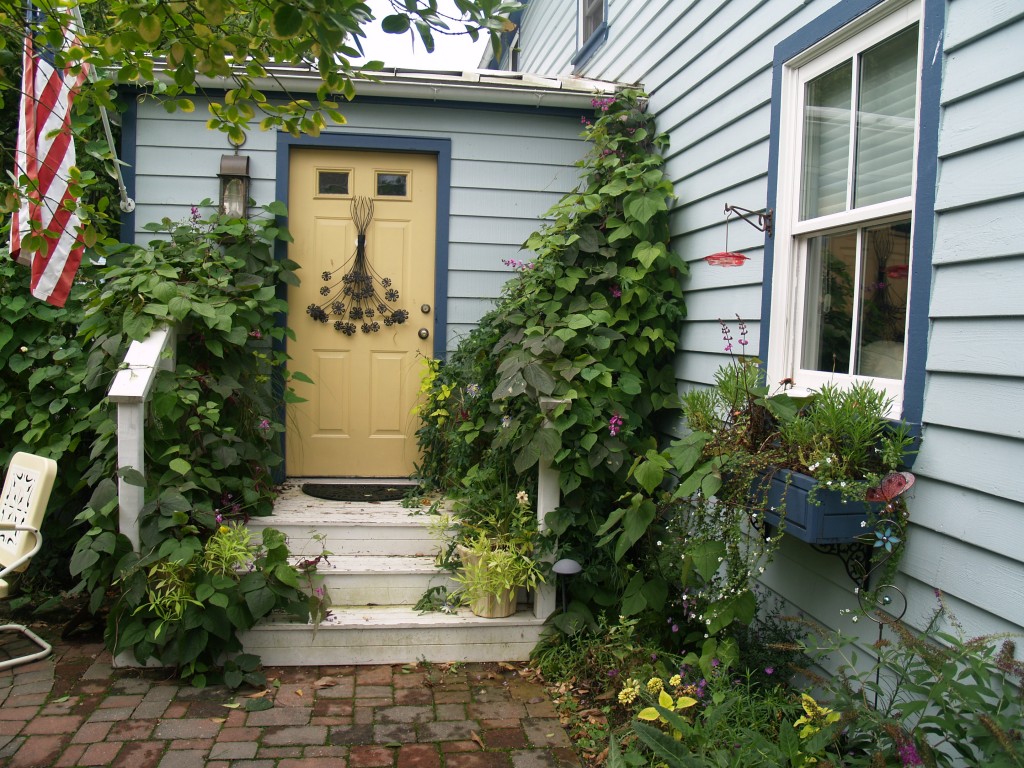 With the tiny lots it is easy to lavish loads of attention on their gardens.  One advantage of small property.    However, this one should probably be described as diminutive as small may overstate it. 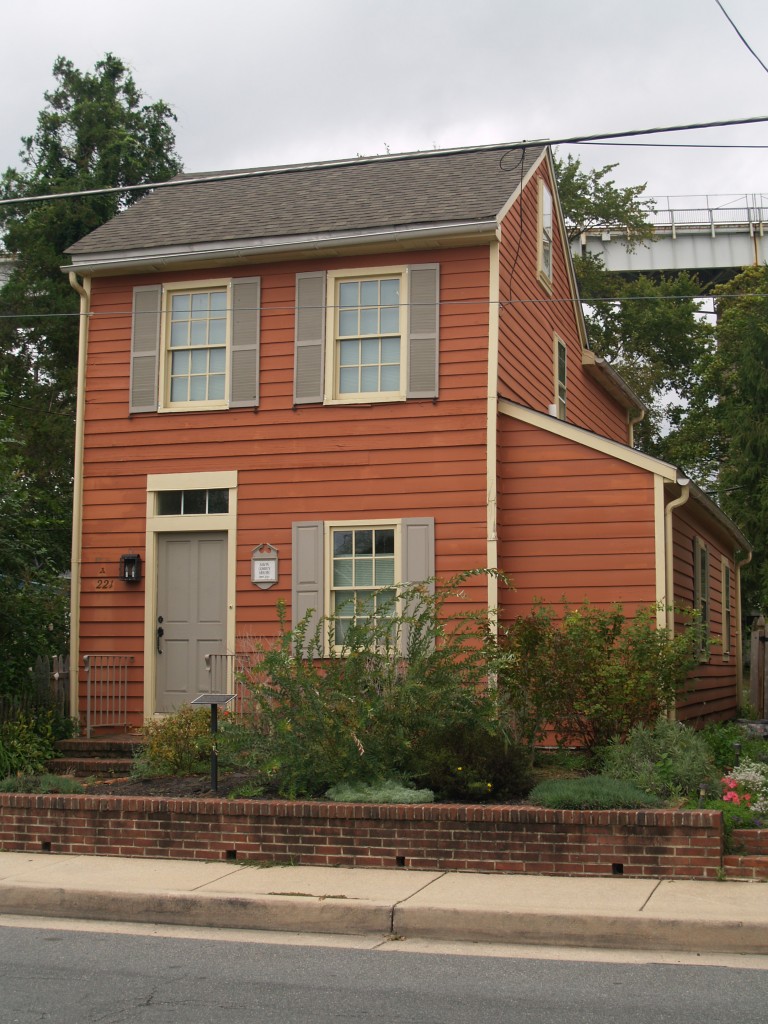 This home had particularly nice gardens. 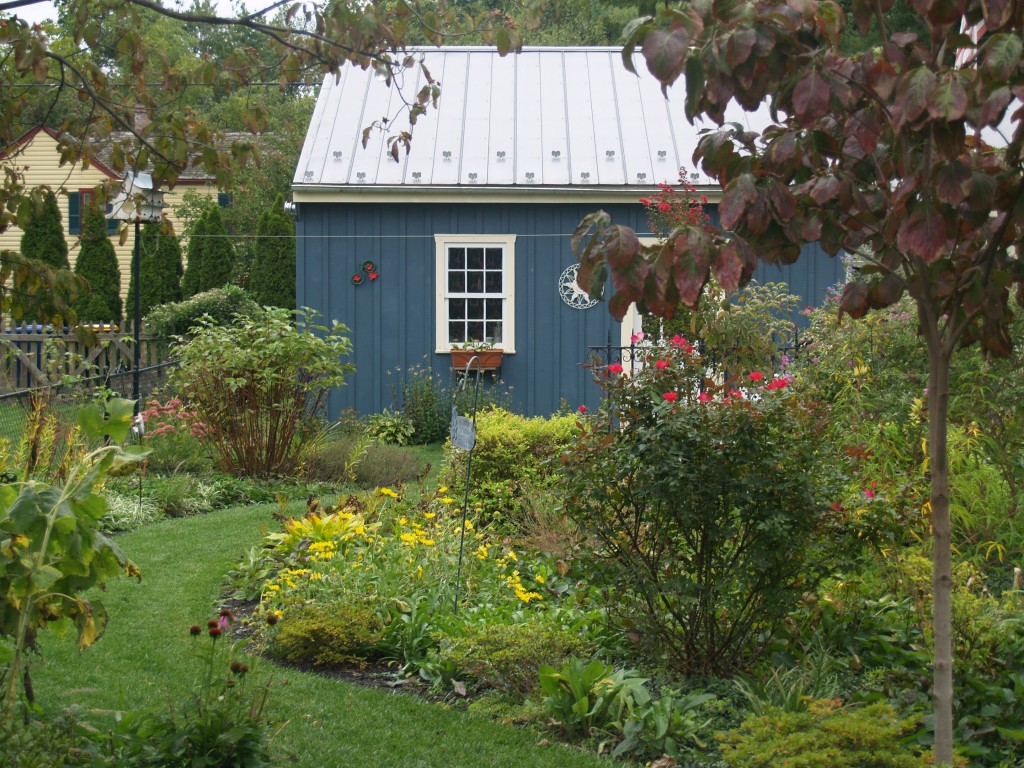 On Wednesday we headed about 15 miles to the Sassafras River, enjoying a broad reach with a fresh north wind under genoa alone.   We were joined by Perigrine, a Catalina 41 from South Carolina and Banyan from Halifax.

Along the way the bay is lined with lovely farms and lots of green grass. 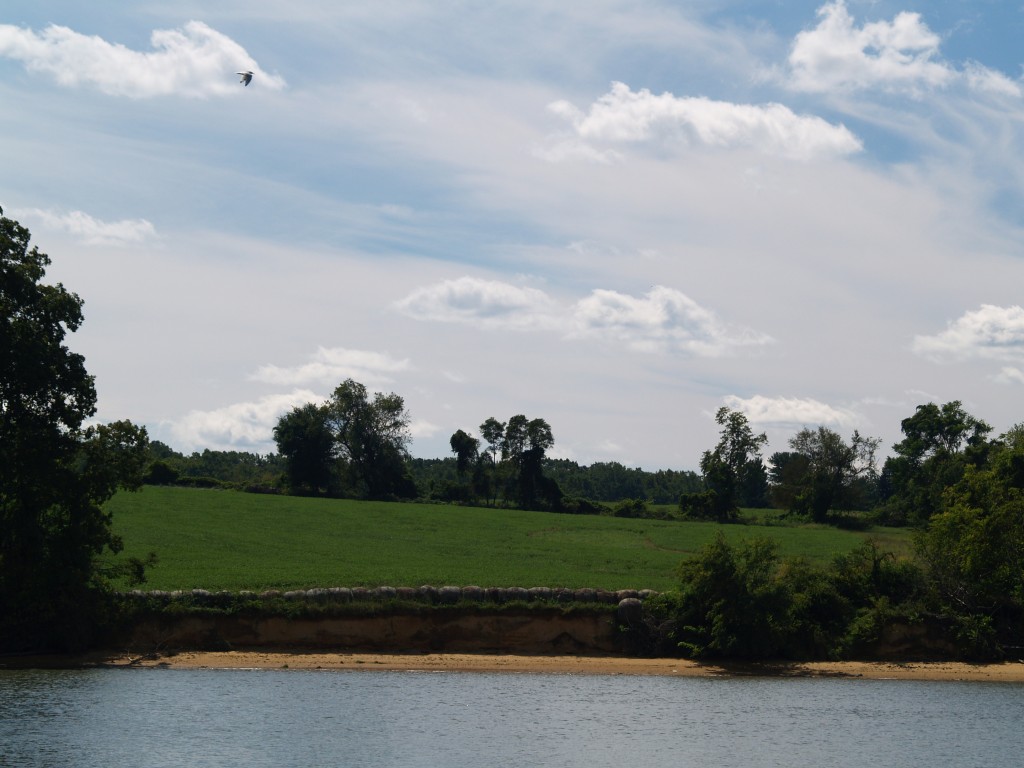 All of us got together on Altair, the big sister to Pandora, the SAGA 48 for drinks.   We swapped stories and compared notes on where to visit in the Chesapeake.    Interestingly, of the 4 couples, three of us were headed to the SSCA gam next week and all are headed south.  The couple on Banyan, the boat from Halifax, had sold their house and about everything in it to move aboard.   They are headed out for a year and will then decide if they are going to head back.  Destination, Trinidad.

All of this talk makes our plans seem like a day sail.  Hmm..

Today we are headed to Rock Hall on the Eastern Shore to do some sightseeing.   Two of the boats from last evening are going too so it will be fun to catch up again.  Unfortunately, a motor boat ride all the way.