Norman Island, classy til the sun goes down.

It’s Friday and we are motoring into 20kts of wind, headed to a new anchorage at Cooper Island for tonight.  The wind is strong and blowing from the NE which makes running east along the BVI islands a slog to windward.  With a short chop and a bit of an adverse current, it’s a very slow go.  Our goal for the week is to make our way to the windward end of the chain, spend a few days at the Bitter End YC and then have a leisurely run back west with the wind at the end of or week cruising together.

Yesterday’s run from Soper’s hole was about an hour and took us to Norman’s Island, a well protected harbor full or moorings featuring a very nice waterfront beach bar/restaurant as well as the notorious floating boat bar William Thornton or “Willy’s” as it’s known in the charter community.  With some 50 moorings in the well protected harbor there are plenty of charterers on hand to keep these two businesses humming day and night.

The beach bar, complete with terrific free wifi, is as nice as any Hilton resort and yet it’s only accessible by boat.  Of course, there are plenty of day trippers who come over on tour boats from the nearby USVI for lunch.  It’s a nice spot. 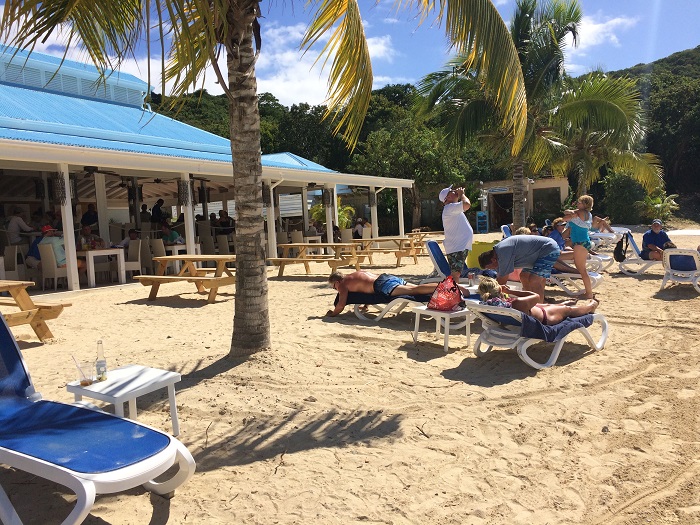 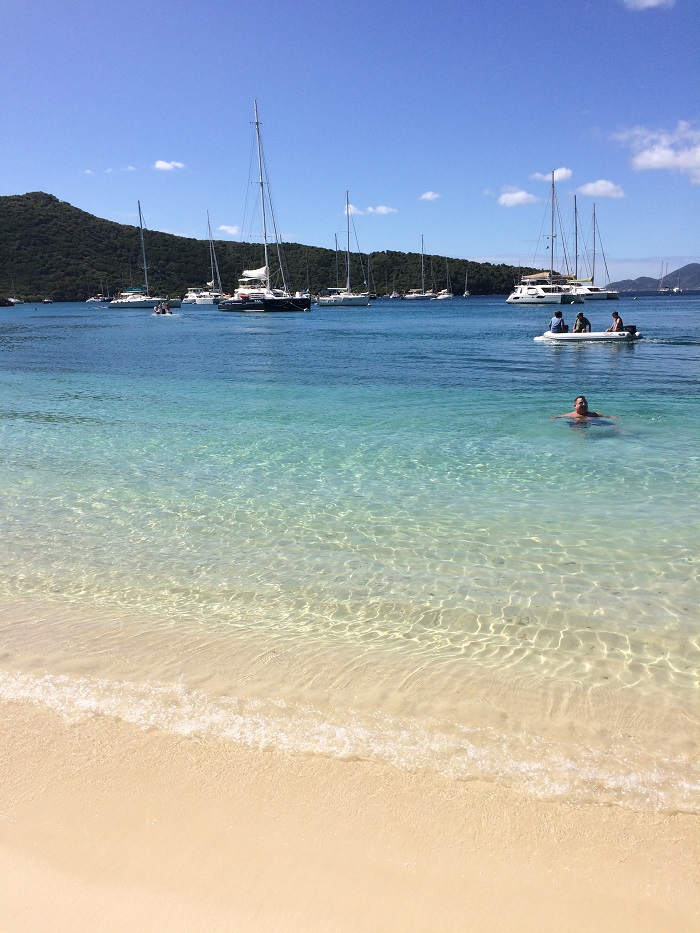 I went there for the afternoon to relax, check my email and make some wifi phone calls.  An all around nice afternoon.  My crew went snorkeling nearby.

As the sun set and moon rose above the mountains it was amazing. 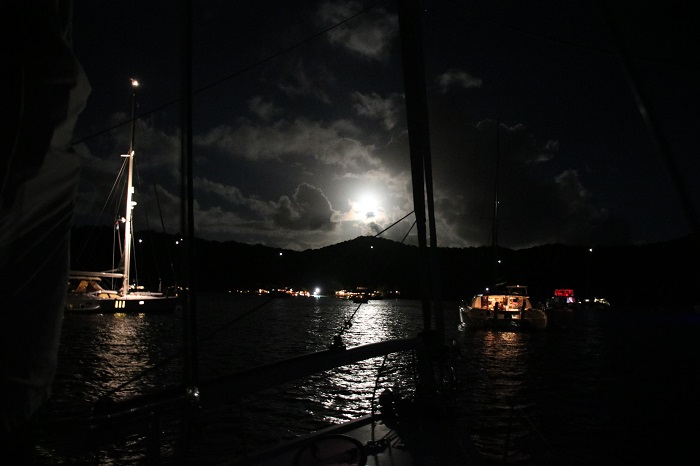 And, after dark the “animals” came out to play.  Willy’s boat bar, and it’s a sort of converted small freighter, is on a mooring in the cove and is THE spot to be seen after dark.  And as well kept as the beach bar is, Willy’s is the exact opposite and the PERFECT place for the charter gang to “let their hair down”, way down, well into the wee hours.

The bar tenders were eager to serve and serve they did early and often.  The guy on the left was also busy dealing in what one reveler called “Colorado Salad” on the side and in plain sight.  No need to be secretive in the BVI mon. 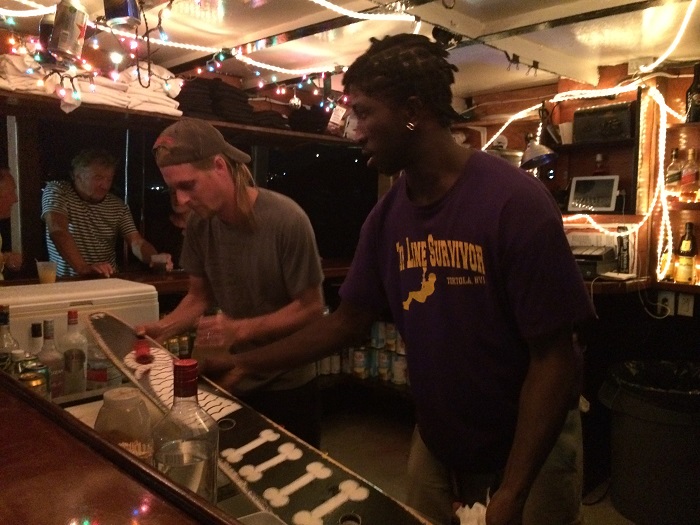 As the evening ramped up, two boat loads of charterers, festooned in flashing lights arrived ready to rumble. 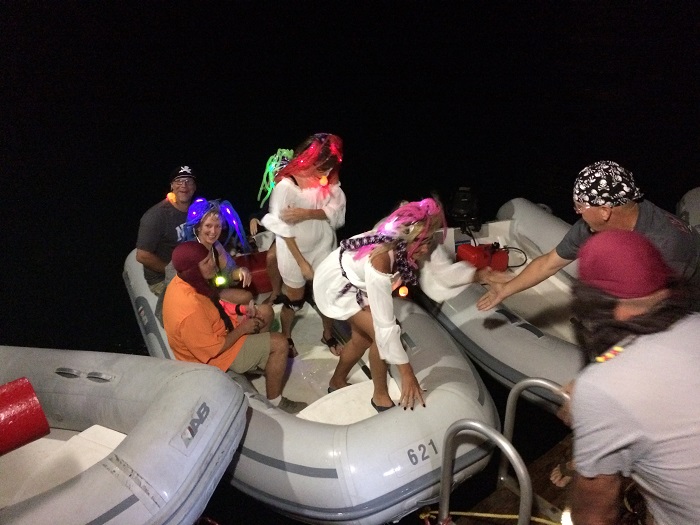 After a few beers there was a handy sign on the head to keep everyone up to speed on the rules. 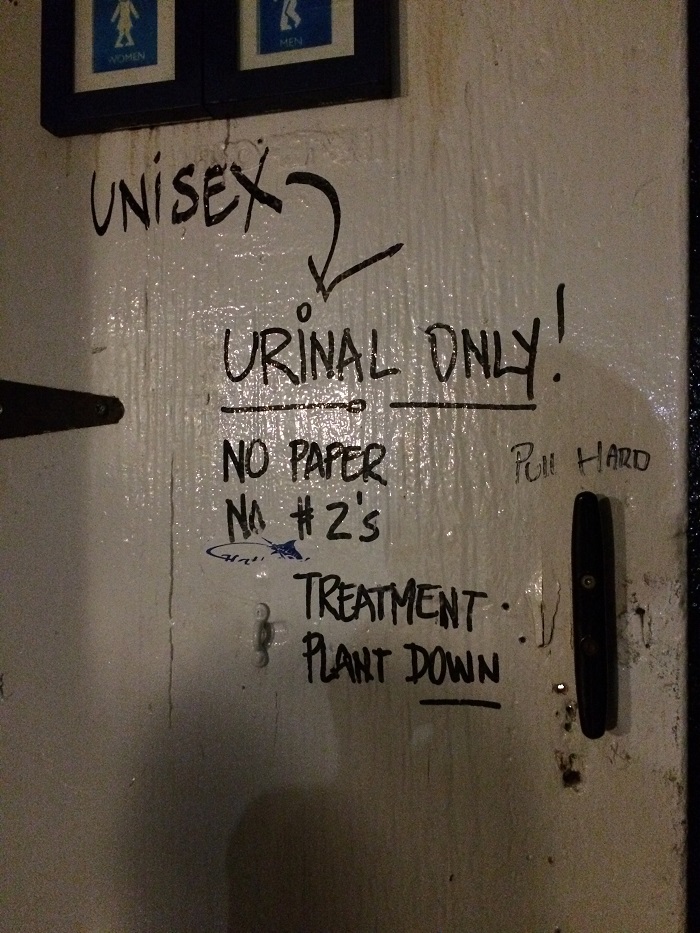 Willy’s also has a particularly charming custom of putting four shot glasses of who knows what into specially drilled holes in an old waterski.  The idea is for four to stand together and as the board tips, everyone drinks at the exact same pace. 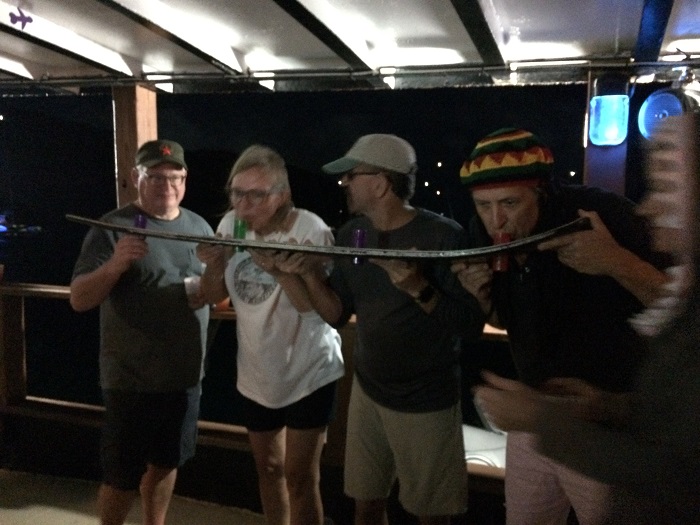 And the pace is really, really fast. 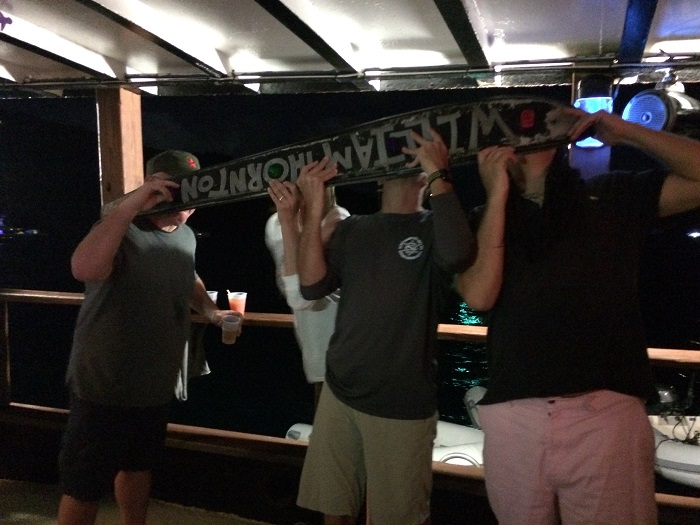 After a few rounds with the waterski, this fellow decided it was time for a nap.  Doesn’t he look cozy in his dink? He even took time to peek over the side from time to time. 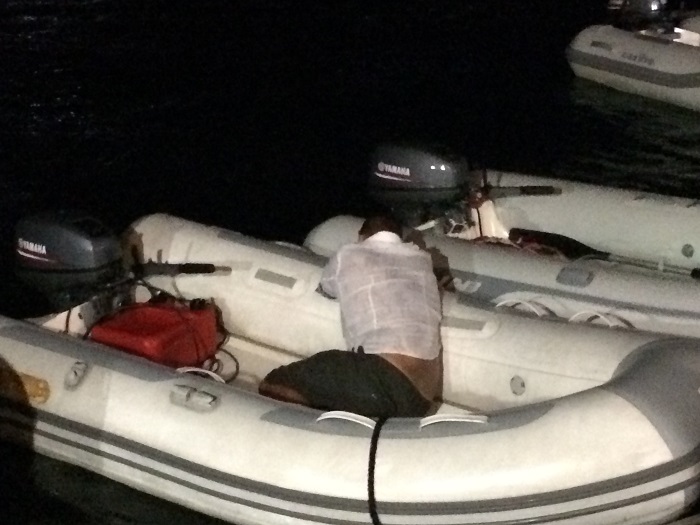 After a while his girlfriend, well that’s what I think she was, decided to keep him comfortable. How sweet for her to support him like that. 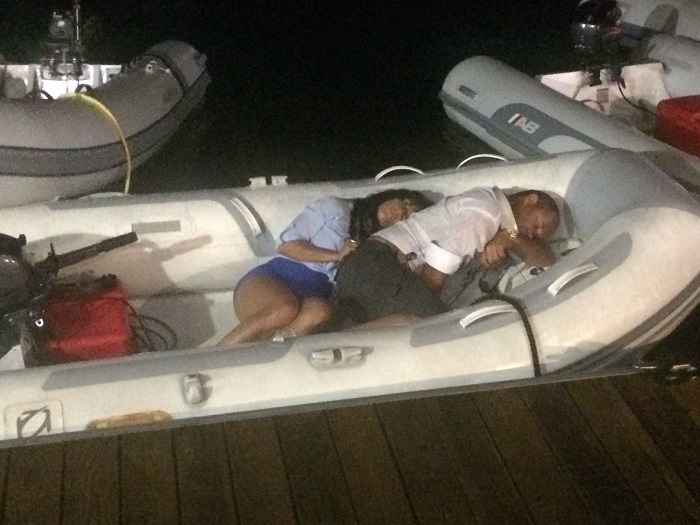 There was pounding music and plenty of dancing.  I was particularly amused by a group from Ukraine headed up by a sort of soft and pudgy “mini oligarc” holding court with his girls.  The girls seemed way more interested in impressing him than he was in them.    I guess he thought that he was “all that and more” on his 50’ Moorings charter cat.   Perhaps the girls didn’t realize that his father moved in circles where the boats were about 10x that length.   Perhaps they were in “training” for bigger things.

As the evening wore on, I was even lent one of those lovely flashing hairpieces.  Even when I was all dressed up and totally awesome, I was only asked to dance once and by a Brit in her late 60s.  Perhaps she thought I too was a mini Oligarch.  I did my best not to break her bubble.   I don’t know, seemed like some sort of angelic halo to me.  For sure, compared to the “dink nappers” was was a perfect angel. 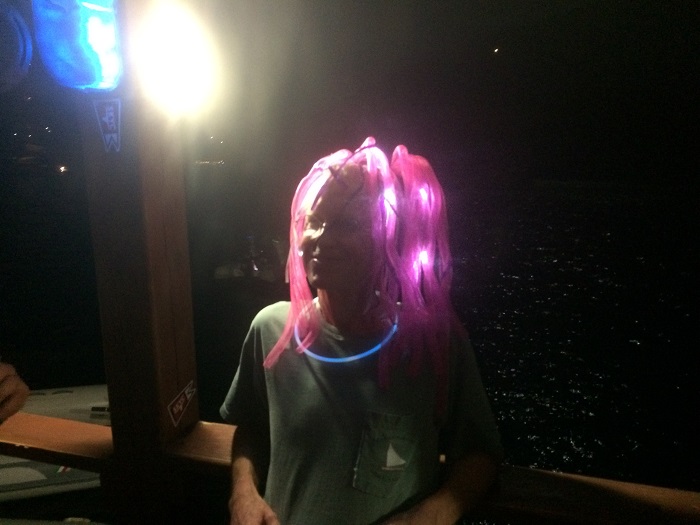 Norman’s Island is a must stop spot for charterers and the beach bar, well very nice and with GREAT WIFI.   I recall clearly that I had fun.  However, I have a feeling that many of Willy’s customers, while they aren’t sure what they did they were pretty sure that it was fun too.   Better them than me.

I guess, as they say, “you had to be there” to appreciate it.    Yes, Norman’s a classy spot, well at least until the sun goes down.

Sure, I’ll have another Caribe.  No, perhaps not.

2 responses to “Norman Island, classy til the sun goes down.”