>Pandora back in the water, finally. Let the sailing begin.

>Pandora launched as planned on Friday morning in Annapolis.  After all of the preparation it always amazes me how quickly it all happened and then we are floating.  With months of preparation and organization when it comes time to launch.  The guys show up with the lift, rig up the straps and off they go.  Aside from my sanding and painting the underside of the keel, the whole project couldn’t have taken more than 15 minutes from when they showed up until Pandora was afloat. 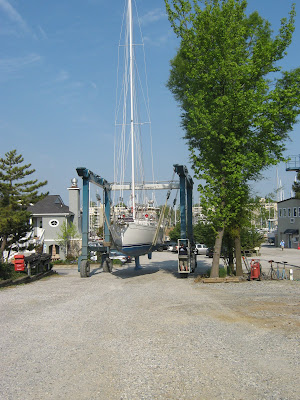 That’s a big lift but the mast is even higher.  At just a shade under 65′ tall, Pandora’s mast will just fit under the bridges on the Intercoastal Waterway to Florida which has a 65′ controlling height on the bridges. 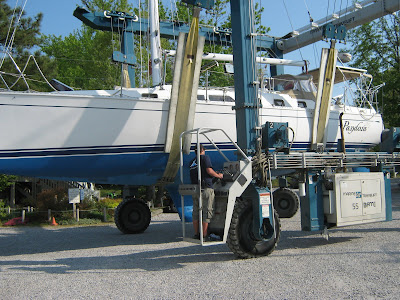 Amazing how big she looks in the slings. Actually, the closer to land she gets the bigger she seems.  Get her off shore in nasty conditions and she seems down right diminutive. 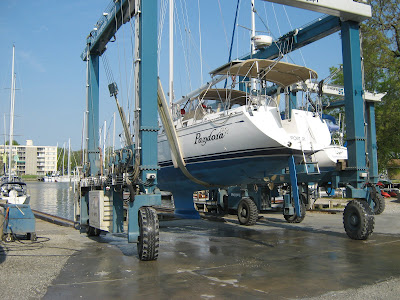 Just about ready to drop in. 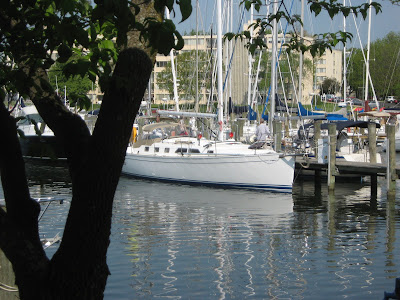 After hitting the water, we moved to the other side of the lift dock to begin finishing up on the last minute details.   How serene it all looks.

It would seem that after the countless hours of work that getting the boat ready entails, that we’d be ready to go once she splashed.   No, no, no…

Let me list the ways, the many, many ways.

The chart plotter and all of it’s interconnected wind direction and speed, boat speed, water temperature, auto pilot, GPS, radar, repeaters are all interconnected and ALL DIDN’T WORK!!! Blank screens, mindless blinking boxes, NOTHING WORKED.  Did I say that NOTHING WORKED?  I made a quick call to my friendly electronics guy and two hours later we were back in business.  Fortunately, when I called he picked up immediately (you have to love those cell phones) and within 10 minutes he was aboard.   I was sure that he was going to say “I’ll be able to come by next Tuesday” but he didn’t.  He waved his magic wand (after tearing apart a slew of interior cabinetry) unplugging all sorts of things, plugging them in again and putting them back together again.  After that, everything magically worked again.  Pretty unsettling that it can all be that easy/hard but Pandora was happy again.

Meanwhile, the sail maker, no, make that two sail makers, were aboard taking measurements for a new storm jib (more about that in my next post).  I had hoped to buy a used one but no such luck.   Getting the fit just right is a trick with the new inner forestay wasn’t in the cards with a used one so I caved and ordered a new one.  Brenda was thrilled, as you can imagine. Another “boat dollar” later it’s on order.

To complete the moment, the rigger was back on board for a rig tune the new rig and a bit later his assistant was back to finish up on a few last minute details.  It’s amazing how there’s always “one more thing” to do, and to charge for on a boat.   The good news is that the rigger walked me through all of the details of tuning the rig so now I understand how to do it myself.  Which is good as it will need adjusting again after the new standing rigging is used and stretches a bit as is worked into shape.

My good friend Chris Blossom, the marine artist, loves to tease me about Pandora, with all of her complexities and constant repairs.  His boat, a 30 year old Luders 33, fitted out for offshore sailing as well, is much less dependent on electronics and his bills are much, much less as well.  It’ fully a fully capable boat but it’s a lot less complex.  There’s something to be said about low tech.  However, I do love all of those things that go beep.

Meanwhile I spent over an hour on the phone with the HP printer guy in India trying to get my new on board printer to work with my laptop.  This is critical for business as we will be splitting our time between home and Pandora this season.  On the boat I now have all of the technology that I need to stay connected, just like a “real office”.

Along with everything else that was done to the boat over the winter, we put a flat screen TV on board last year.  However, it was never connected to an antenna and to date have only used it for watching movies.  Now that we have this slick new mast head TV antenna (I don’t even want to think about what that cost to watch “free” TV) we have HD TV aboard Pandora.  The real trick will be to see if our solar panels will be able to keep up with the power demands of a TV, refrigeration, printer/scanner, navigation computer, Brenda’s laptop, my laptop, multiple instruments, microwave, water pumps, GPS, plotter, radar, cell phone chargers, lighting and all of those shiny electronics that go beep (when they work) that keep Pandora happy.  Yikes, it better be a sunny summer on the water as solar panels don’t put out much when it’s cloudy.  Perhaps it’s time to get a wind generator.  More on that later.

Until mid June Pandora’s home port will be Sprig’s pond near Annapolis in a slip.  Here’s  a shot of Pandora (across the dock, stern too) near Lumen, another SAGA 43.  Lumen is just visiting as her owner Peter recently arrived from Florida where he had her for the winter.  Peter keeps Lumen in Maine and will be back in a few weeks to continue his trip back home. 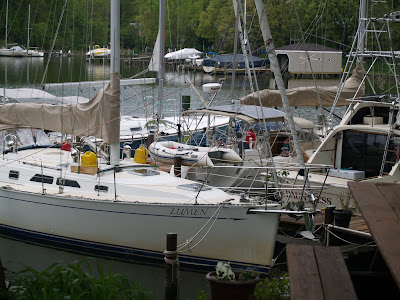 For now, Pandora and Lumen are docked together.  Not exactly a flock of SAGAs but more than are usually on the same doc.