It’s Friday afternoon and Pandora is all snug in her slip here in Hampton VA at the run up to the Salty Dawg Rally that will depart from here for points south, primarily the British Virgin Islands on or after November 1st.
At last count, there are some 85 boats participating in the rally with nearly a week of seminars and social events leading up to the “big event”.
I arrived here in Hampton on Thursday after a two day 350 nm run from Essex CT with my good friend/crew Jim.  Jim has the distinction of having crewed with me for more miles, some 4,000 miles, than just about anyone else in spite of having sailed with crew for over 30 years.  Of course, Brenda has more miles with me but that’s another story and one that you’ve likely heard, ad/nauseam, if you have read more than a few posts.

So, here I am in Hampton enjoying time with others who love to sail and am having a great time.

The run here from Essex was, shall we say “sporty”, with Pandora plowing along on a close reach (wind forward of the beam) in 25kts with gusts over 30, conditions that are anything but fun.  The good news is that we were romping along at 9+kts for much of the first 24 hours and ultimately made the full run in a little less than 48 hours.  That’s very good time indeed.

Good run or not, I was exhausted when we left as Pandora had “splashed” only day before so I only had a single day to get her prepped, sails back on and ready to go.  Way too fast for me.   She looks positively “ginormous” on the hard next to our little VW wagon. 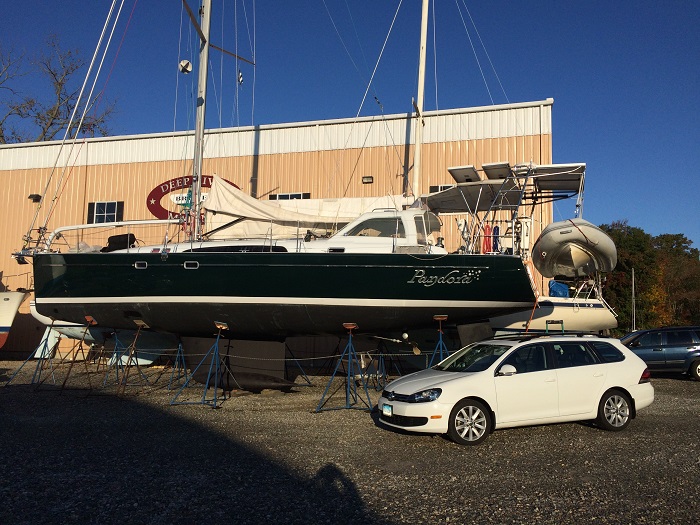 While I know Pandora pretty well by now, having put perhaps 5,000 miles on her in my first year, there are still needling problems that I have not been able to correct so far.   In particular, some pesky leaks that have been hard to track down.  Perhaps the worst are with the long lexan ports on the main cabin that tend to leak when it gets cold and they shrink more than the surrounding fiberglass.   I am hoping to get them replaced in Beaufort NC where Pandora will sit for a few months prior to running to the BVI in January.

Anyway, I won’t bore you with more discussion with “drips” but salt water and cushions don’t mix.  Frustrating to say the least.

While Pandora is fast and can outrun most any other boat of her size and plenty that are larger, that speed and long waterline comes with a negative as she is also a very wet boat and as she plows through the seas, there is plenty of water flying everywhere and deck is constantly wet with a river running down the deck and off the stern.  It’s an impressive sight from under the hard dodger.  Fortunately, the cockpit is roomy and secure. 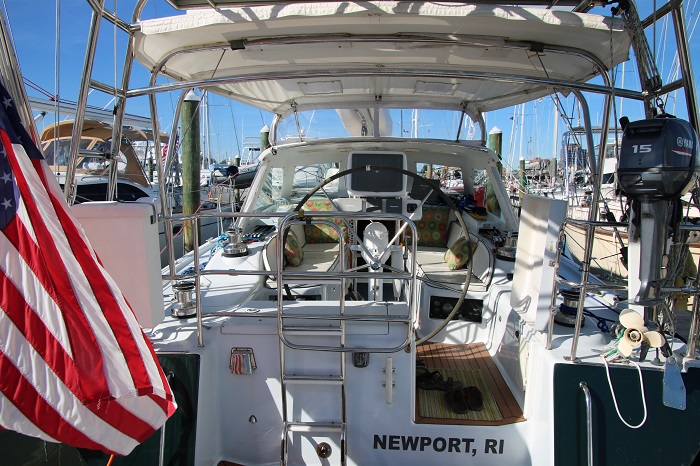 In case you have missed it somehow, Pandora has an impressive and nicely designed hard dodger to keep us out of the weather.  This is a shot of her at the dock today here in Hampton.  I think that she looks like she means business. 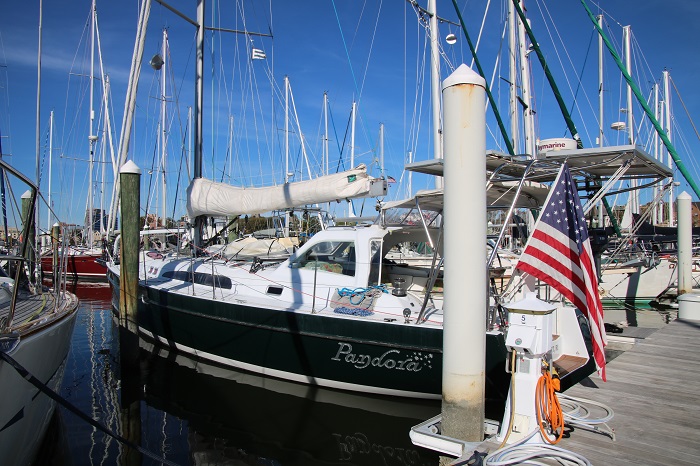 Today I presented a talk about our trip to Cuba at the Hampton Yacht Club to a group of nearly 60 “Salty Dawgs” and was thrilled with how well received what I had to say was.  They asked lots of good questions and laughed at all my jokes. Well, there was one joke that didn’t get much of a rise out of them.   I’ll live.

Our story of Cuba is one that I never tire of giving and to present to such a nice group of sailors that will very likely go there themselves was particularly rewarding.

Just for fun, this is a link to an article that I wrote in the current issue of Blue Water Sailing about our trip.  I hope you like it as much as I enjoyed writing it.  Actually, writing it was a blast and I doubt that you will rank it quite that high.  If so, great.  Let me know what you think.

Well, Pandora made it here safely with a minimum of fuss and I am eager to enjoy the next few days of fun and then off to Beaufort NC.  BTW, that’s pronounced “Beaufort” as opposed to “Beeufort”, pronounced as it’s spelled, in South Carolina.

I should note that it was plenty chilly when we left Deep River on Tuesday morning with frost on the deck when we arrived to shove off.   I can’t say that I like cold even a little and the first 24 hours of our trip was particularly unpleasant.  Happily, I have a diesel heater aboard so at least we were warm down below.

By the second day of our run the temperatures had moderated a bit so it wasn’t quite as cold on deck.  It was also a lot calmer with winds that all but went away for a bit so things calmed down a bit and I could catch up on my sleep.

As we passed the Chesapeake Bay bridge on our way toward Hampton and Norfolk we were treated to a beautiful sunrise and you know how much I love sunrises.  Beautiful view from the stern. 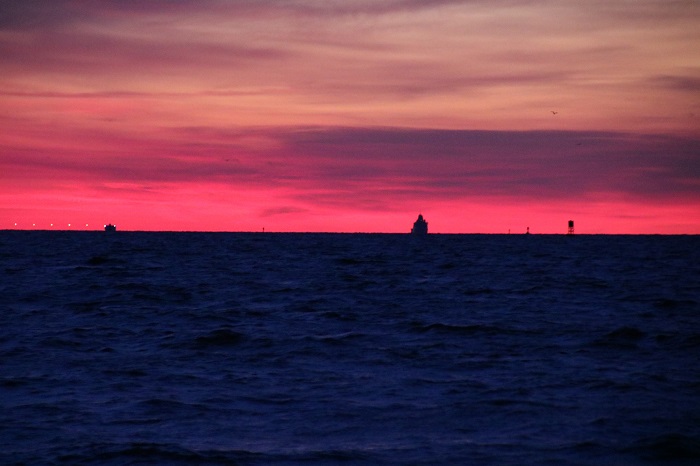 And, in case you are inclined to forget that the biggest employer in these parts is none other than “Uncle Sam”, one of the advanced “stealth” cruisers passed us on her way into Norfolk.  Stealthy or not, she showed up just fine on radar.  Stealth?  Hmm…  Perhaps someone forgot to flip the ‘stealth switch”.   Never the less, I was impressed. 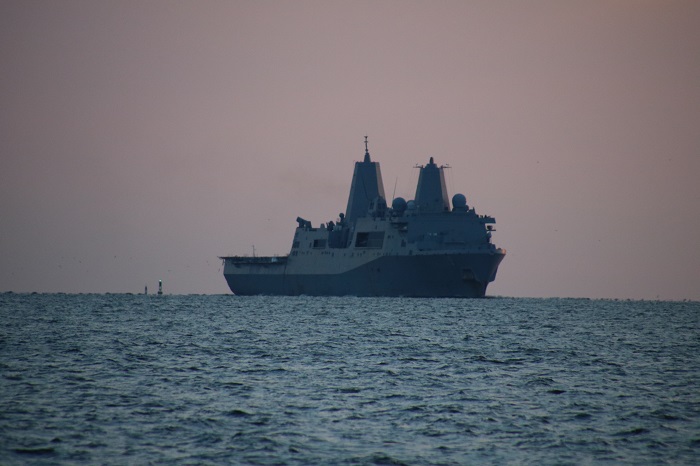 Ok, enough for now.  I had better sign off for now as there is a session to go to now.  Besides, it’s happy hour after that and that’s not something I want to miss.

Fun time am I am so excited about my own “migration” south for the winter.  Me and the birds, on our way.

So far, so good. Stay tuned for more…

3 responses to “Let the migration begin!”