Where the big kids play.

It’s Saturday morning and we are on a mooring here in Sag Harbor, “the” harbor in The Hamptons, where the big money plays and play they do.

Sag Harbor has been off limits to us or many years as the harbor has the distinction of being the most expensive place on the east coast to get a mooring, even more expensive than Nantucket.  The moorings here are $2/ft per day.  So, for Pandora’s 47’, that would be close to $100 per night and we’d still have to make your way ashore in a rubber dink.  Horrifying.

However all is not lost.  Essex Yacht Club maintains two moorings here in the harbor so we can camp out here for a few days and we don’t have to pay anything for the privilege of being here.   Well, we don’t have to pay till we go ashore at least as nothing is free in this town.

However, I think it’s safe to assume that we are about the ONLY ones not paying, and I am sure that they are plenty happy to pay big for the privilege of “being seen” among the “glitterati”, the “who’s who” of New York Society and entertainment.

The local “rag” Dan’s Papers, lists benefit events being held and there are literally dozens each month, offering many opportunities for the 1% set to show that while they don’t pay taxes, they are willing and able to support any number of causes and happy to be seen doing it.  I’ll bet that this area is the ONLY one in the U.S. where there is a local paper that actually lists the top billionaires that keep a home here, include their picture, the name of their “current” wife, note what they paid for their home and how much they are worth.

Anyway, no shortage of folks with plenty of green to spend and spend it they do. Poor little Pandora among the big kids.  And, some of the “kids” look pretty grown up to me.

How about this one?  She carries her own Mini, complete with the name of the yacht, Indiscretion on the side. 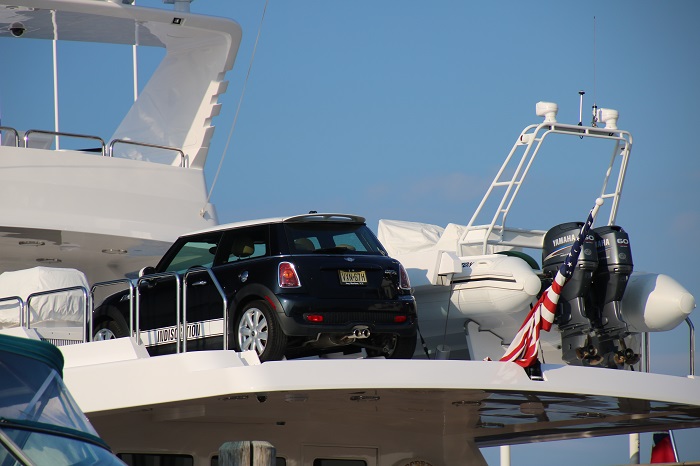 I’ll bet that it’s safe to say that their dink has more HP than the Mini.  “Honey?” “Yes, Buffy, what is it?”  “Oh, I think that our Mini looks just adorable aboard Indiscretion but I just don’t feel comfortable as it was your ex that chose the color”.  “That’s nice honey but can we talk about it when I’m finished reading Baron’s?”

And the “dinks” on some of these “megas” are quite impressive. If Darth Vader wanted one I’ll bet that he’d pick this. 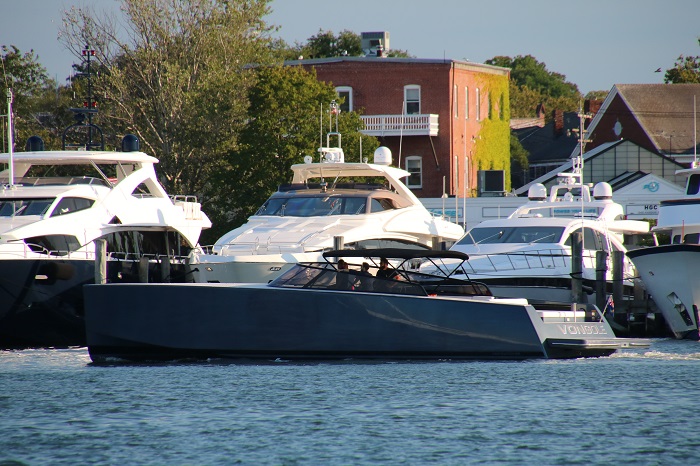 How about this lovely? She’s well into the “mega” range and yet has the lines of a small sport boat.  Note the crew on the bow.  They look totally teeny tiny up there.  I’ll bet her “carbon footprint” could squash a billionaire like a gnat. 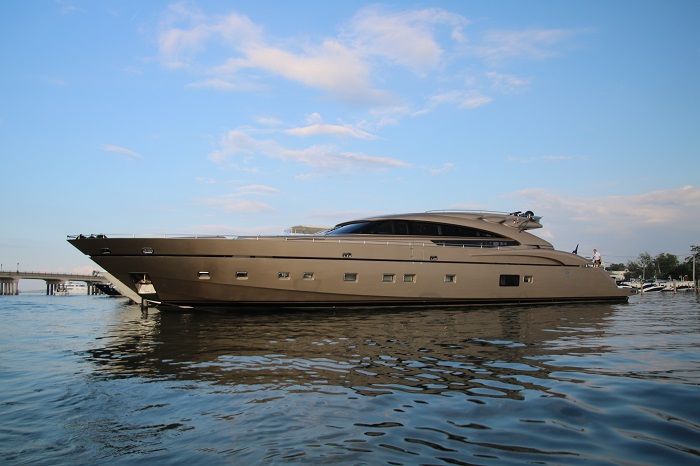 However, all the yachts here aren’t “mega”.  How about the latest in a line of beauties owned by Billy Joel, Argos.  I recognized the guy who takes care of Billy’s boats from an article I saw a few years ago in Soundings, a boating newspaper.  Billy has very nice taste in boats. 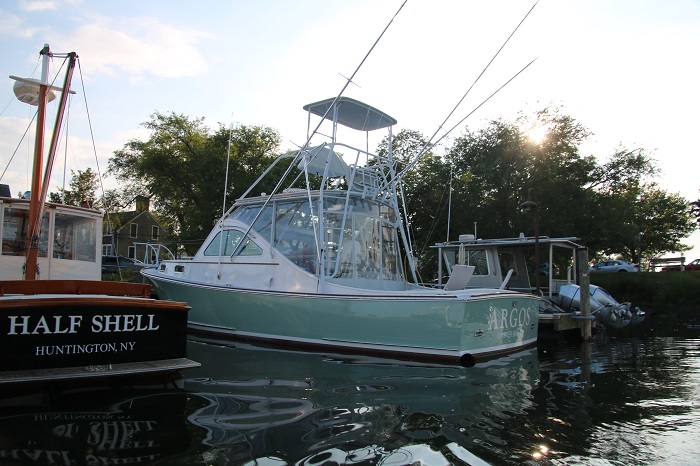 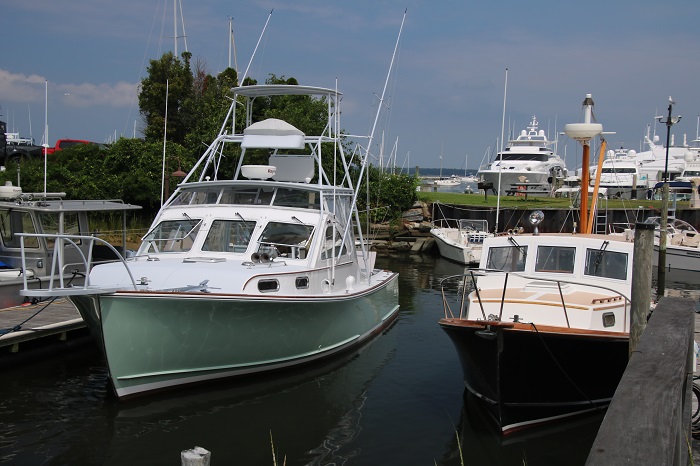 Scout, which I have seen in Newport, is a beauty.   Yes, I’d enjoy a G&T aboard her. 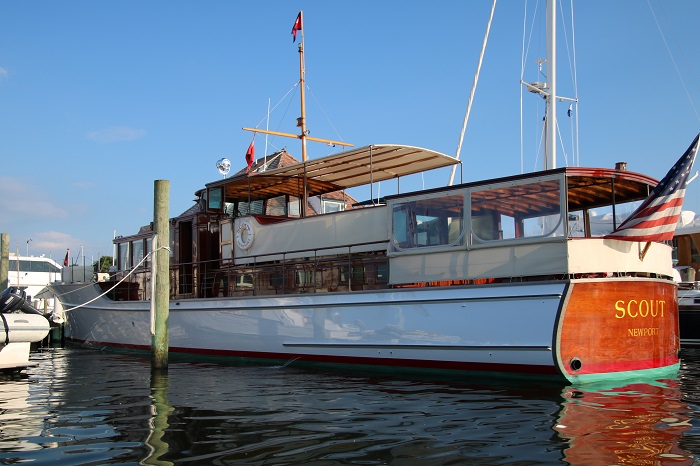 And, if you can’t afford MEGA you can always put mega HP on your micro yacht.  This one has 1,400hp.  I’ll bet that she can outrun all but the fastest 1%. 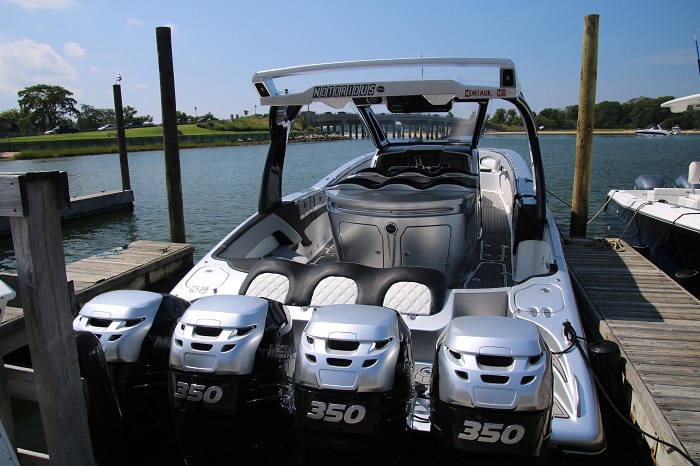 In the parking lot near the marina there are some very nice cars that fit just fine in the neighborhood.  Love these two, the Aston Martin and the beachy thing.  Note the mega hydrangea behind them.  It seems that flowers love the climate here too. 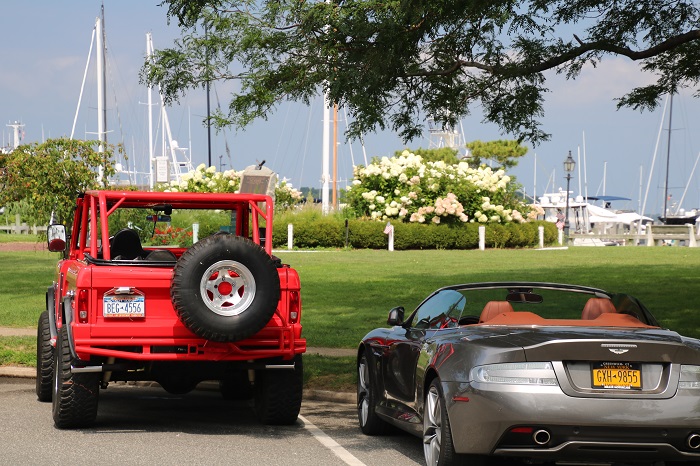 The florist in town was getting ready for the weekend.  All of these phalaenopsis orchids were in a room that said “all the flowers in this room are sold”.  White sells well here. 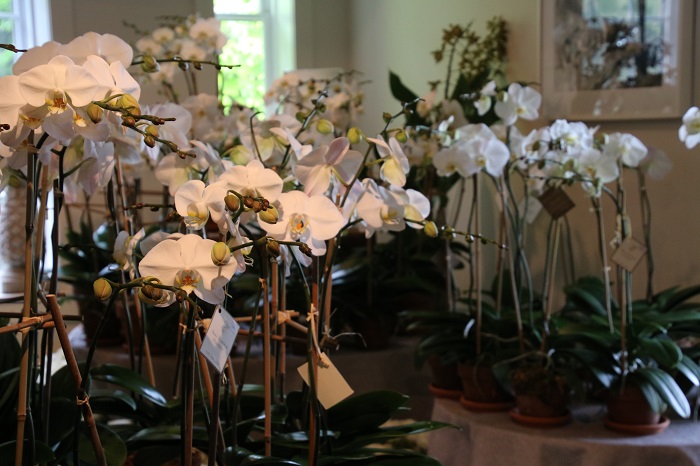 Not to worry, there were plenty still ready for you to take home. 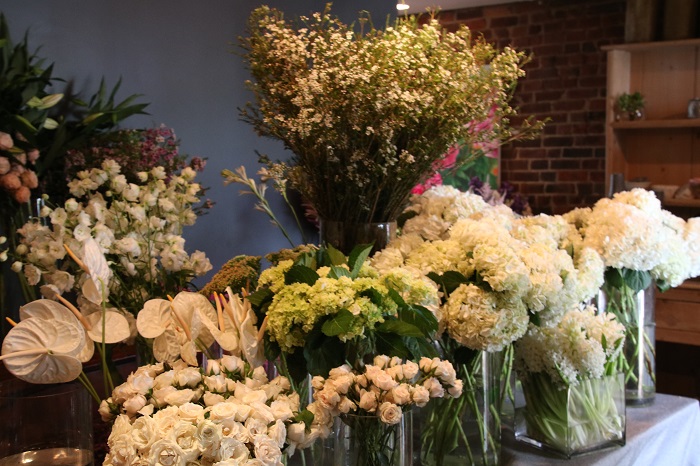 The staff had to work out on the front lawn to arrange all the flowers that had been ordered.  There were many dozens of red rose arrangements being prepared for just one Friday night party.

I don’t know anywhere else that celebrates white like the Hamptons.  We saw a number of stores that only had white.  It’s tough to be a “mega consumer” so one less decision about color is a big time-saver. 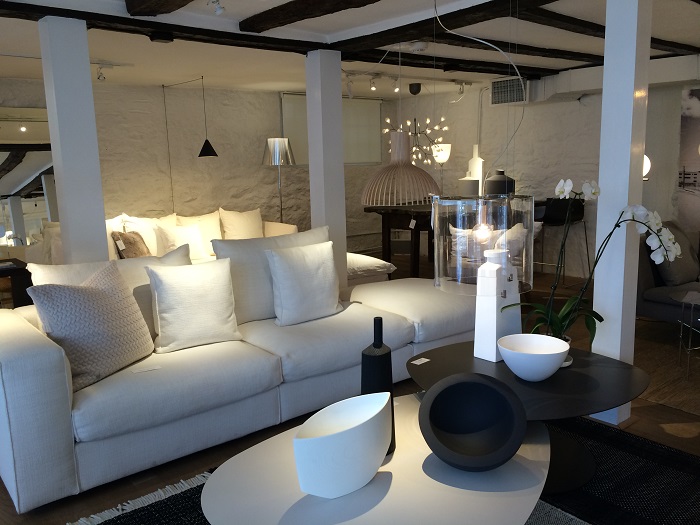 While it wasn’t white, a very nice mega planter in downtown Sag Harbor.  I wonder what the statue guy thinks of what Sag has become?   I’ll bet that he wishes he had held onto the property he owned longer so he could afford something mega himself. 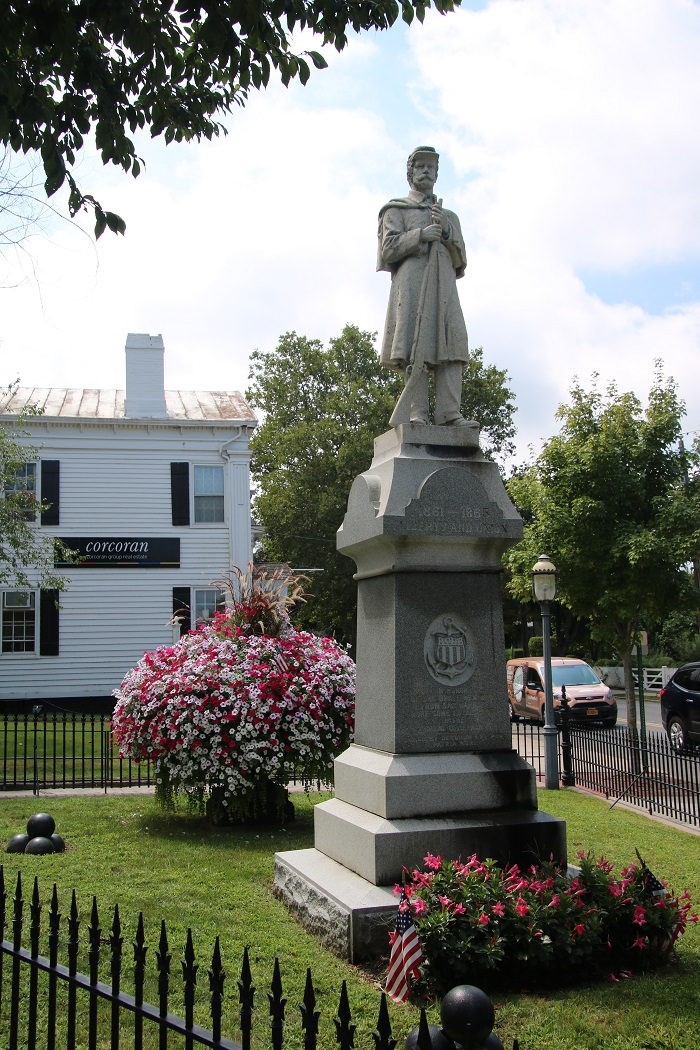 Nice view down main street for him though. 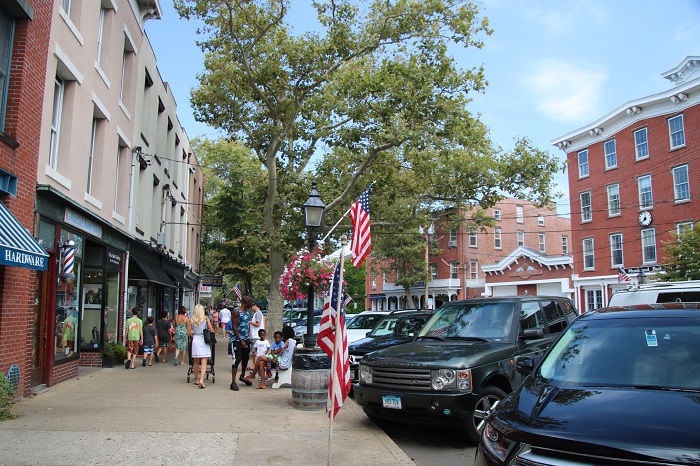 And speaking of flowers, which I sort of was, we rented a car and drove around and visited some wineries.  Along the way we spied this amazing field of sunflowers.  I nearly rear-ended someone who had stopped to take a photo too. 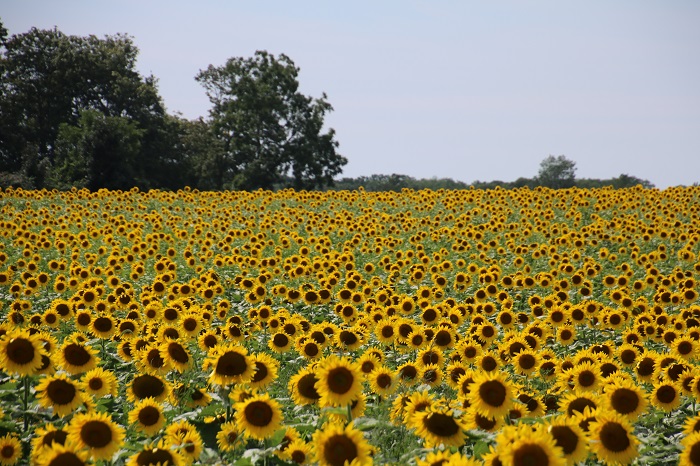 No, we hadn’t had too many tastings, not yet anyway.   I’ll admit that we visited our first winery before noon.  But, it was only a very little taste.  Ok, it was just a little tastes of five different lovely whites.  Just five or was it ten sips? Whatever… Besides, we had to be absolutely certain that we liked it.

It was also good to confirm that the wines were made in a very clean winery.  Love the stainless. 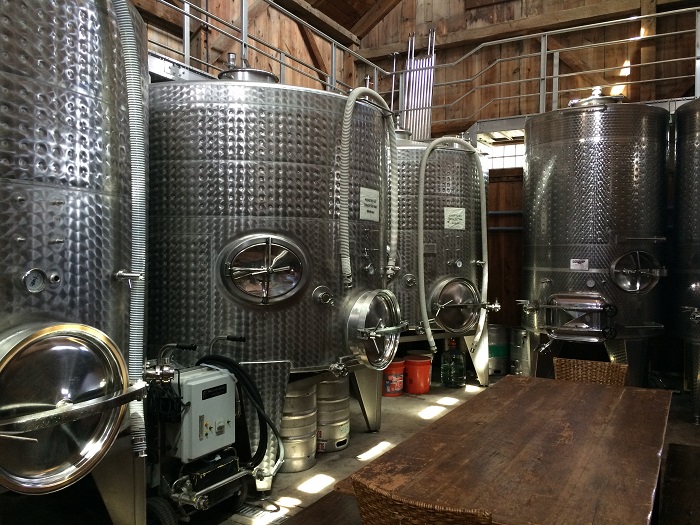 No dirty wooden barrels in sight. 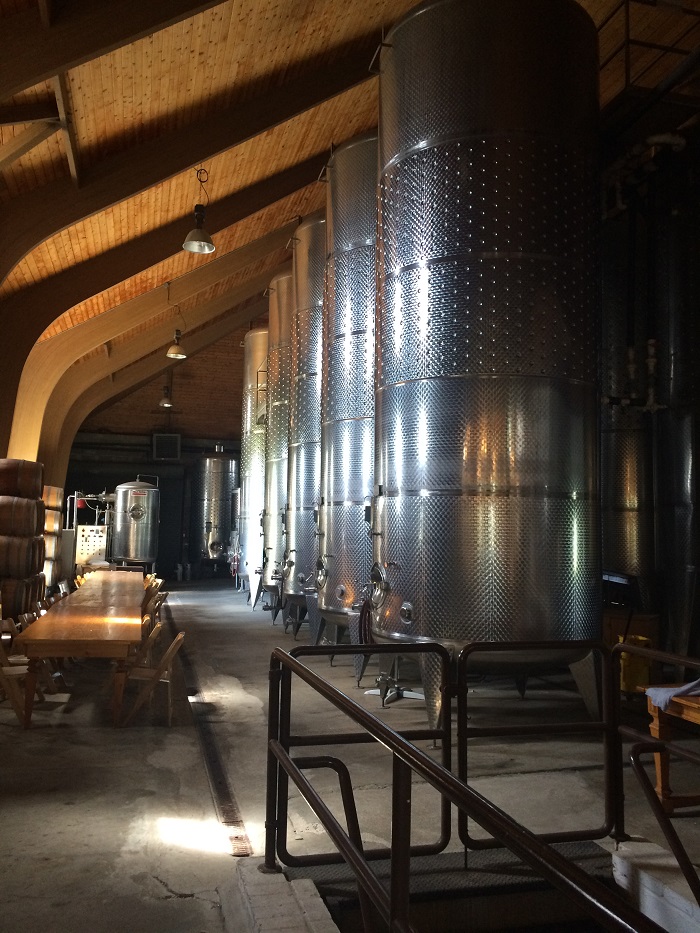 What a relief.  We only drink hygienically made wine, of course. 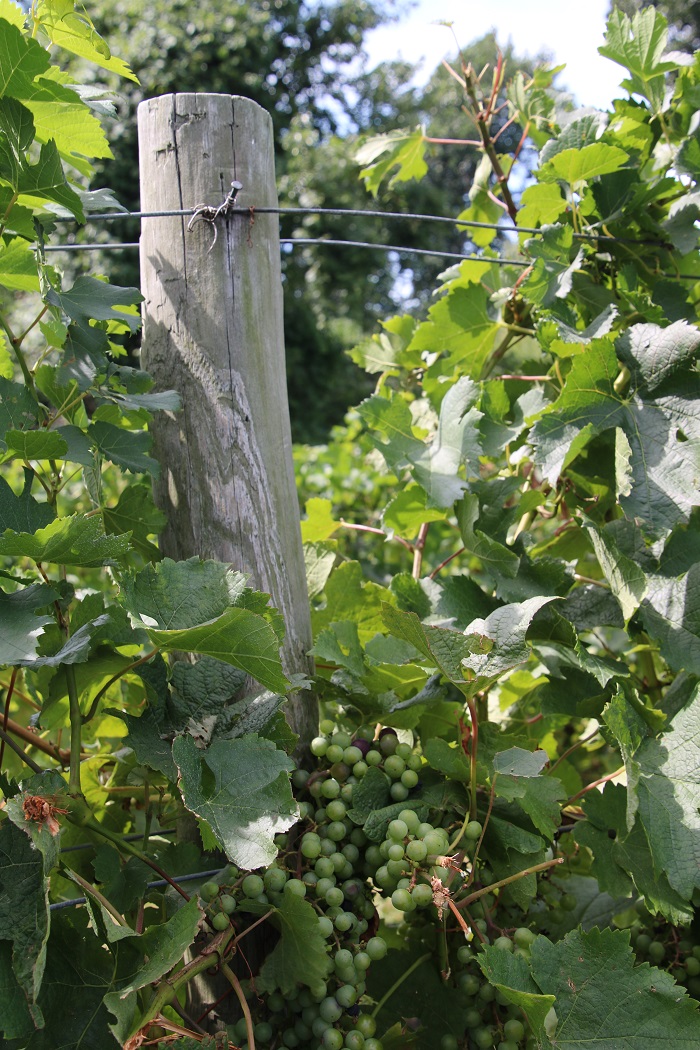 We drove along the south fork, up the north fork,  took two ferries across Shelter Island and back to Sag Harbor. 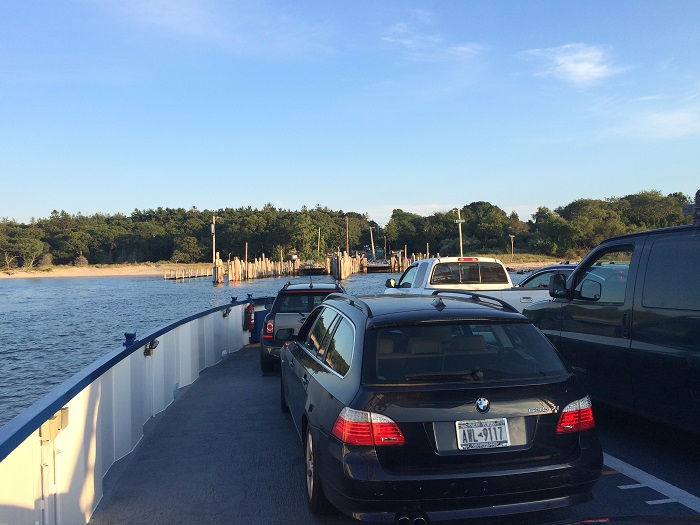 Let me tell you, it’s the most expensive per mile of any ferry that you will ever take.  Each ride takes less than ten minutes, including docking.  Total, one way,  $30

Impressive?  Don’t forget “if you have to ask what it costs, you can’t afford it”.  Well, I can for one day.  After that, not so sure.   We stopped for yet another glass of wine at this lovely hotel on Shelter.  What a spot. 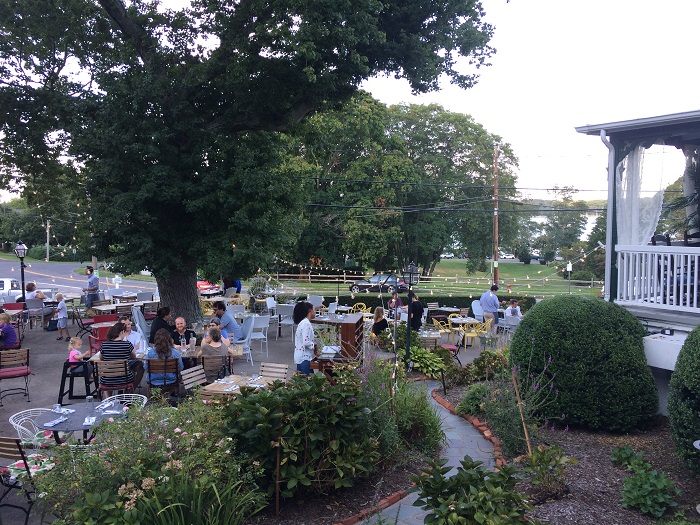 Can’t recall the name but where else can you have two glasses of wine on a lovely afternoon and spend $40, with tip of course?  However, if you are willing to have sparking water, it’s only $10++.  Such a deal.

Yes, Sag Harbor is a very nice spot indeed and it’s fun to be here hanging out with the big kids even if we only sort of fit in because EYC maintains a mooring here.   Well, I expect that there are plenty of others that only look like they fit in.

Tonight, dinner at the American Hotel.  In the garden room…of course. 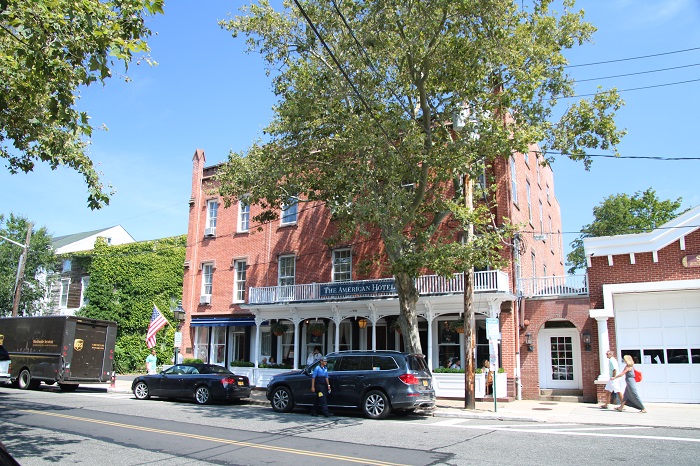 After that, well, we’ll be out of money and have to head home.   Yes, this is indeed the playground of the “big kids” and I while I have more in common with the “little people” I do have a boat.  Besides, my mom has always told me that I’m big and not even a little bit grey.

2 responses to “Where the big kids play. ”