Good news and a full house.

It’s Saturday afternoon, everyone has flown the coop and Brenda and I are alone again.   Our Gam in Essex that I organized for the Seven Seas Cruising Association began a full week ago with guests coming in from all over.  The three day event was a success with nearly 100 in attendance and we had a full house at Bob and Brenda’s B&B, otherwise known as B&B’s B&B.

So, now that everyone has headed on their way things should begin to settle back to normal.  In my last post I mentioned that Brenda had been diagnosed with melanoma, a very dangerous form, no make that the worst form, of skin cancer.   She had her surgery over two weeks ago and is now beginning to feel herself again.   Happily, she had her follow up with the surgeon and they did not find any remaining malignancy which is such a relief.

The timing of the surgery and Gam were unfortunate as we had a boat load, make that many boat loads of folks visiting Essex and staying with us only one week after Brenda went under the knife.  That made for a tough week as she tried to keep up the near constant steam of parties and events that surrounded the event.

The Gam got off to a rousing start the night before the formal events got underway.    Pandora hosted a dink raft-up out in front of the Essex Yacht Club and ended up with 30 aboard.  She was riding a bit below her marks.  We all had a great time.  Her cockpit was jammed. 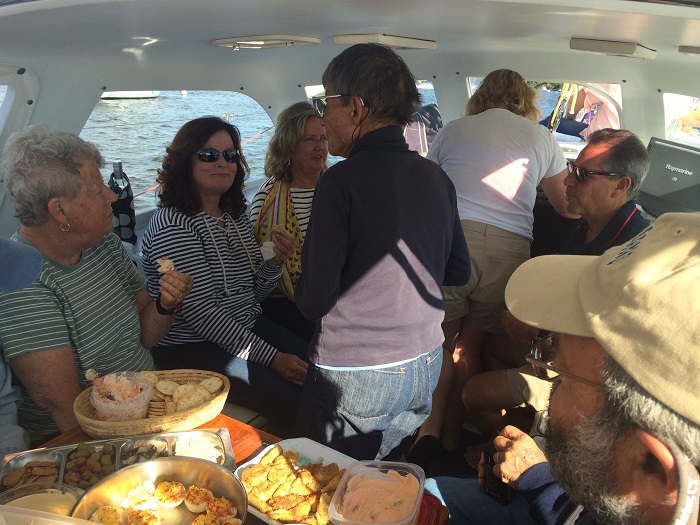 With plenty of overflow to the forward deck. 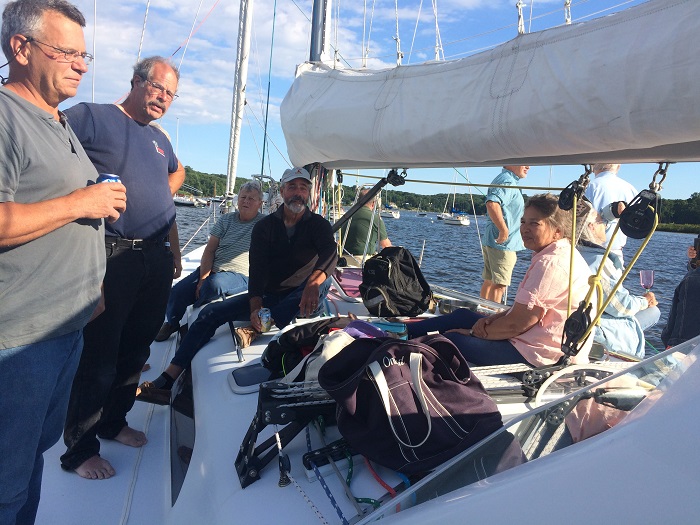 Over the three day event we had a great lineup of speakers including Chris Parker who did several sessions on weather, a topic that can be very confusing. Happily, Chris is very good at making complex issues understandable.    Here he is at the CT River Museum, where we held the last day of the event, standing in front of a reproduction of the “turtle” the first military submarine.   The original was built in nearby Old Saybrook back in 1775.  It’s not Brenda’s idea of a cruising vessel. 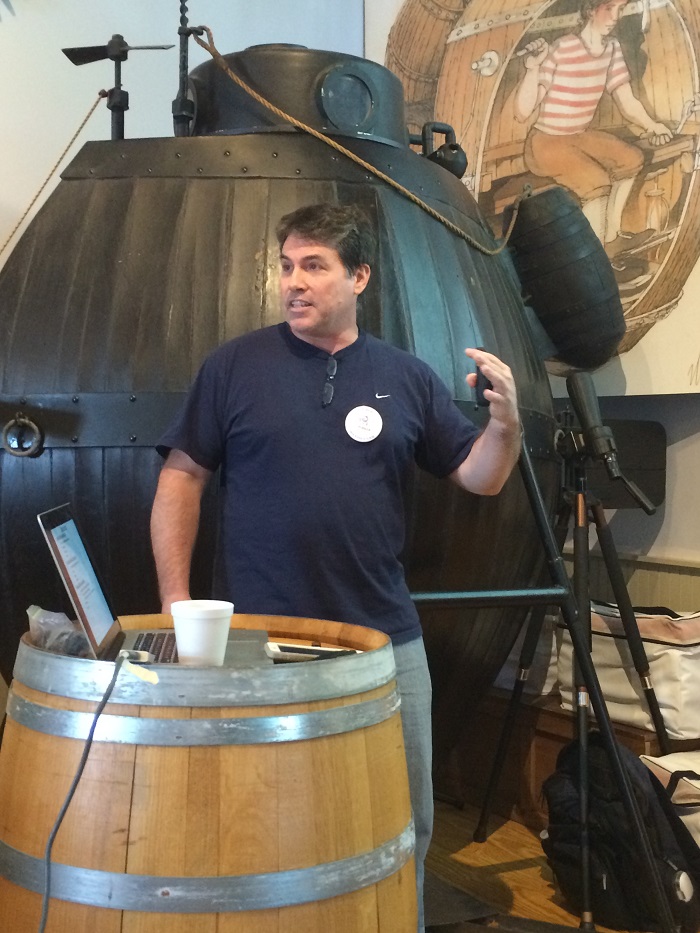 It was a thrill to have Chris do his morning and evening broadcasts from my home office.  Somehow he was able to manipulate his antennas at his studio in FL via the Internet as well as broadcast over the SSB.  How he do that? 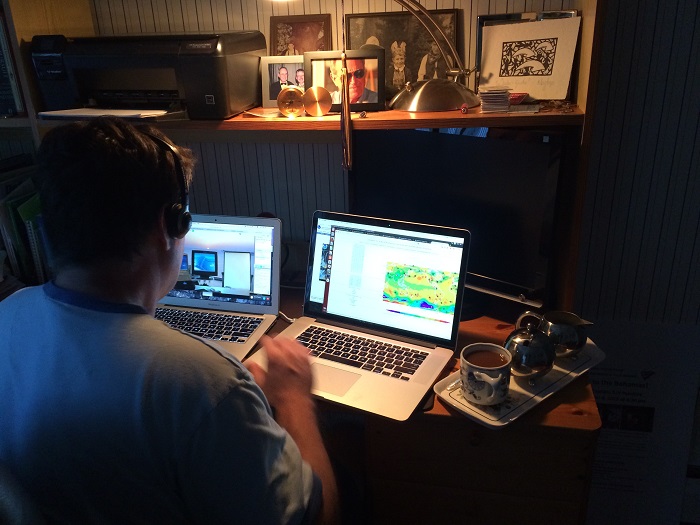 Jake from Life Raft and Survival came down from RI to talk about safety equipment and wowed us all by doing a live life raft inflation out on the lawn.   How convenient to have him present as he was able to take my raft, which needed servicing, back to the shop with him.  That saved me a trip and made his trip worthwhile, I hope.   I’ll be filming the inspection of my raft up at their shop in the next few weeks and will write about it in a future post.  That should be very interesting.   Let’s hope that’s the only time I see the thing inflated. 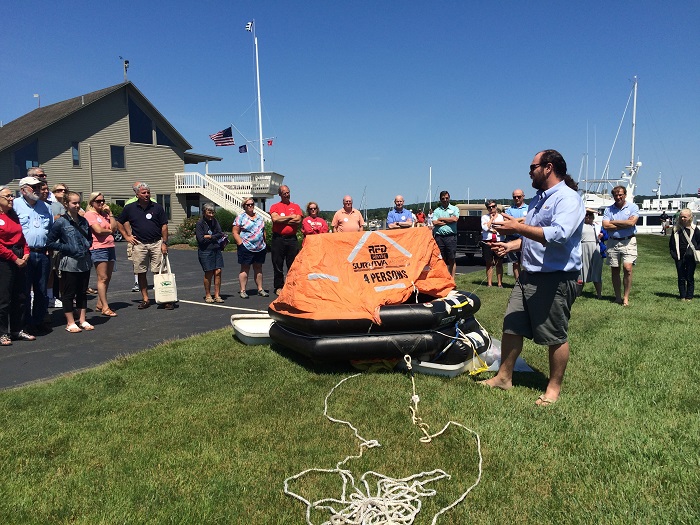 Tom Whidden gave our keynote presentation at dinner on Sunday.  He did a wonderful job presenting a mix of high tech racing, including the current Cup competition and shared some thoughts about what’s going on in contemporary cruising boat design. 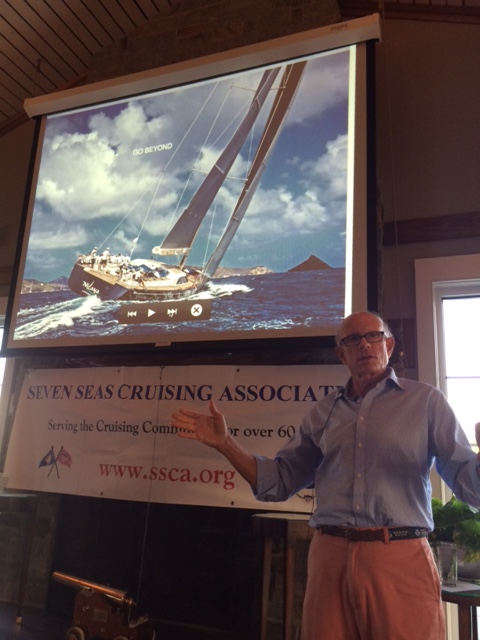 Tom has a remarkable background as a member of the America’s Cup Hall of Fame.  He has won the America’s Cup three times and finished first in class A in the Bermuda race 5 times. He is a very accomplished sailor and we were very lucky to have him speak to us.  I’ll admit that it was a bit easier for me to convince him to speak to us as he’s the current Commodore at Essex Yacht Club.  Thank you Tom.

With nearly 100 attending we had quite a mix of cruisers including this couple that brought their trawler up from Annapolis alone to attend the Gam.  They are both in their 90s.   We should all be as spry at that age.  Perhaps it’s the wine.  I cling to that belief. 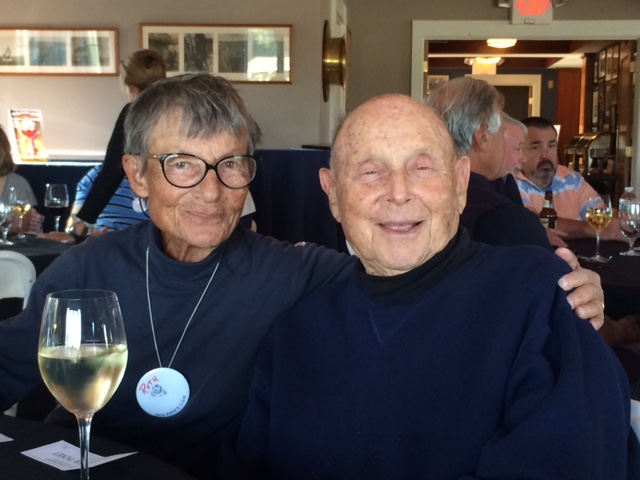 There was much more including a talk by George Day from Blue Water Sailing Magazine about preparing for offshore sailing.  Alas, no pictures of George.

All and all, it was fun to put the event together but I am sure glad that it’s finally over.  Happily, I had plenty of help from my buddies George and MaryMarie as well as others.  Perhaps I’ll take a few weeks off before I start lining up speakers for next year.  Yes, time off, good idea.

A day after the Gam crowds left, our friend Lars arrived in Essex for a visit.  We had spent time together in Cuba and it was fun to see him on our home turf.  His boat Luna, has taken him around the world, beginning in Norway,  over the last 12 years with stops in too many countries to count.   Here’s Luna in Santiago de Cuba where we met him back in early March.

Here’s Luna on the dock at Essex Yacht Club for a much needed scrubbing down. Perhaps not quite as scenic a spot or perhaps it’s just the angle of the shot.  Essex is beautiful, for sure. 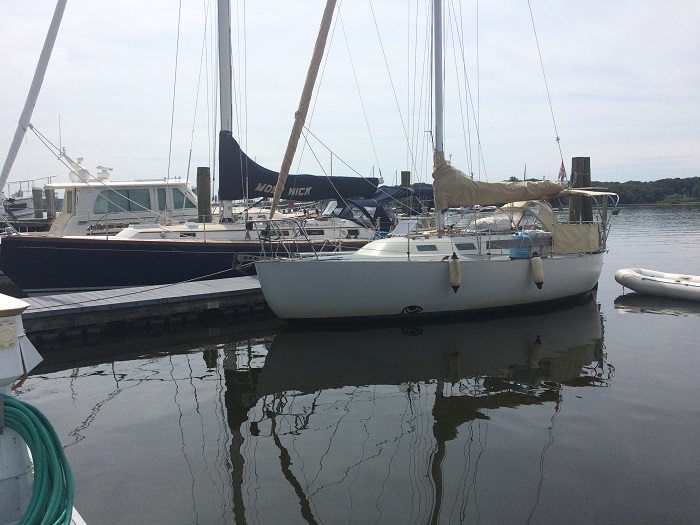 Lars and I headed up by car to Mystic Seaport for the Wooden Boat Show yesterday.  I always enjoy seeing all of the beautiful boats and hardware on display from the vendors.

Speaking of Cuba (well I was a few photos ago) there was a boat at the show that resembled Pilar, Earnest Hemingway’s boat.  The original boat is in Havana. Unfortunately, we didn’t see her when we were there.  While the sign on the boat we saw at the show seems to imply that this boat was “the one”, upon close questioning, the owner fessed up that it was not even the same hull design but that the boat was made to “look like Pilar”.  A nice boat, never the less. 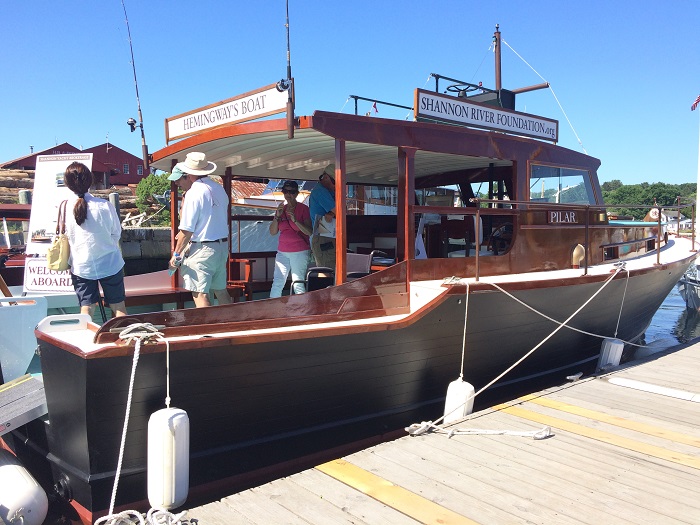 This was a neat find, a Cape Cod Catboat named Pandora.  A bit smaller than our Pandora but beautiful.   I am happy that our Pandora doesn’t have any exterior teak with the exception of a teak cockpit table. 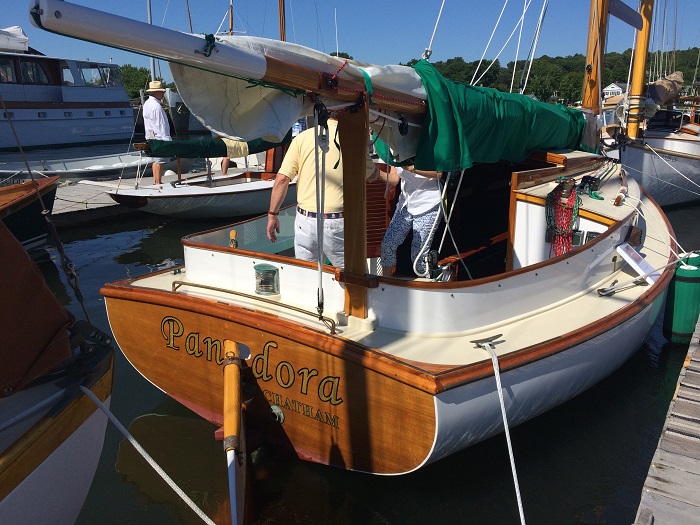 How about a cold molded camper?  Quirky but well made.   It even has roof racks 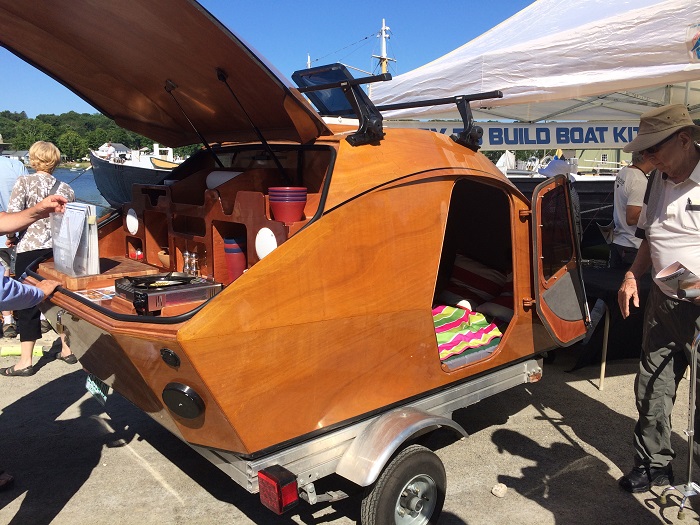 It comes complete with a galley.  Sure hope that it’s always sunny when they are working “in the kitchen” as it’s outside.   Love the paper towel dispenser. 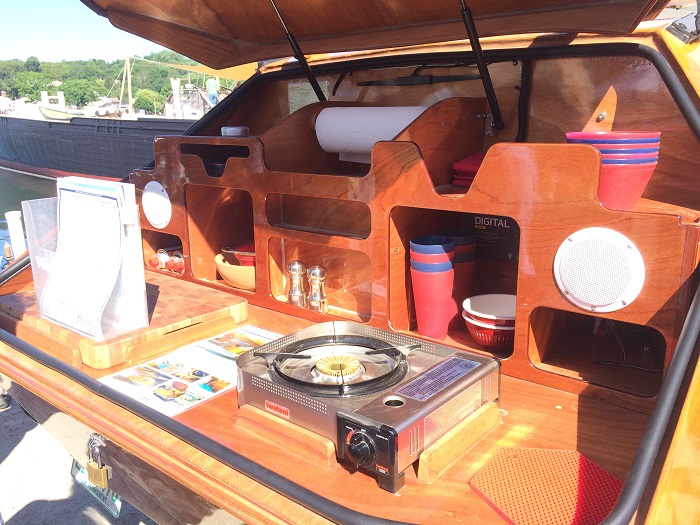 Everywhere you turn, beautiful boats.  How about this drake tail stern?  Lovely. 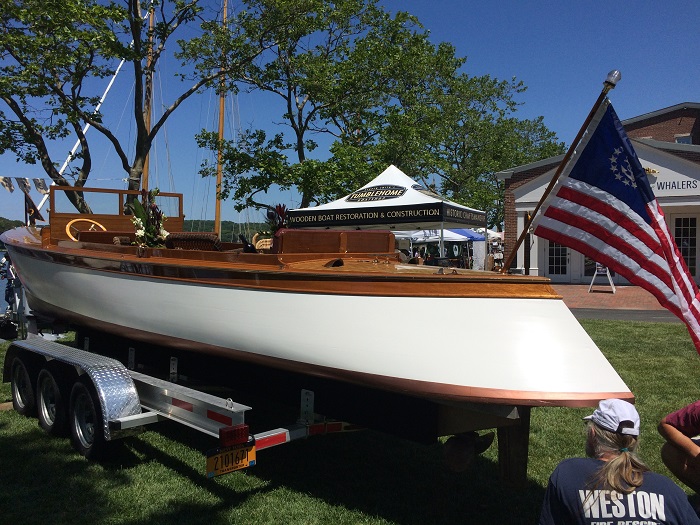 And this beauty built by Gannon and Benjamin, the storied boat builder on Martha’s Vineyard. 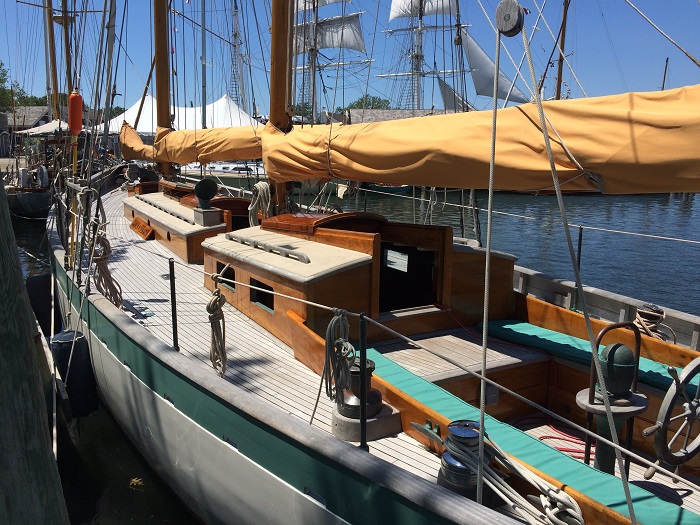 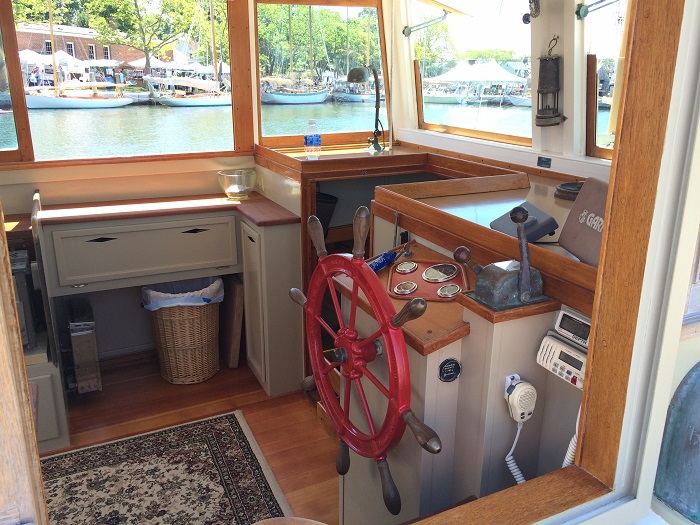 Lars and I had a fun day at the seaport.  He left today to head east.  It was nice to see him again.  Hope it’s not too long until our paths cross again.   Perhaps Brenda and I will visit Oslow Norway (by plane for sure) where his “home port” is, even though he hasn’t been there in many years. 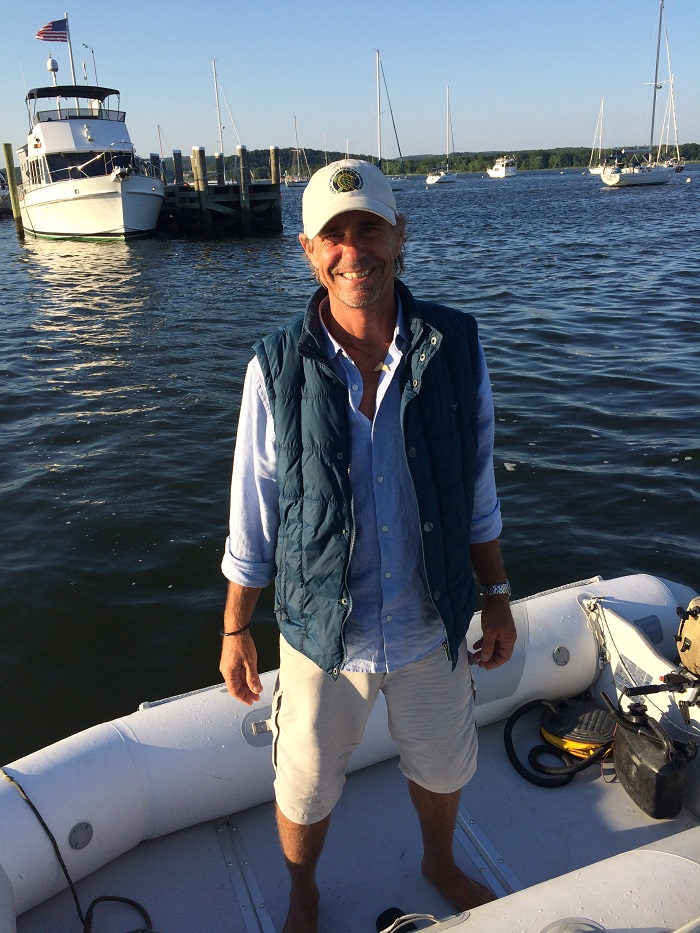 And all of this just scratches the surface of all that happened in the last week, and the “onslaught” began only one week after Brenda “went under the knife”.  No wonder she’s exhausted from all the “fun”.

So glad that she’s on the mend and that the tests show that she is clear of cancer.  That’s very good news, indeed.

I’d say “that’s all for now folks”.  Oh yeah, one more thing.   Did I mention that we had to buy a new car too last week as our 1999 SAAB finally bought the farm?  Oh yeah, and our lawn mower croaked too and you know how much I just love cutting the lawn.

Other than that, noting much going on.