The Rolling Stones play Havana Cuba.  And, we were there!

It’s been said that “every time someone smokes a cigarette they lose a minute of their life and that minute is given to Keith Richards”.  Having seen him in action at last night’s concert in Havana, I’d say that is surely true.  And, with all the cigarette smokers here in Cuba, I believe that he’s sharing some of those minutes with Mick Jagger.

Well, we did it… Brenda and I hopped on a bus (more to come on that in a bit) yesterday morning to Havana to attend the Rolling Stones concert.  And what a “trip” it was.

To get this all organized, we hooked up with someone that our friend (Isn’t that where all important connections are made, anyway?) Lars had met at the marina bar, a Norwegian guy that arranged a shared bus to head go to Havana and then return to Cienfuegos.  It promised to be a very long, but fun, day and did not disappoint.

I have been remiss in not posting a photo of our new friend Lars, without who’s “influence”, I expect that we would not have made the trek. 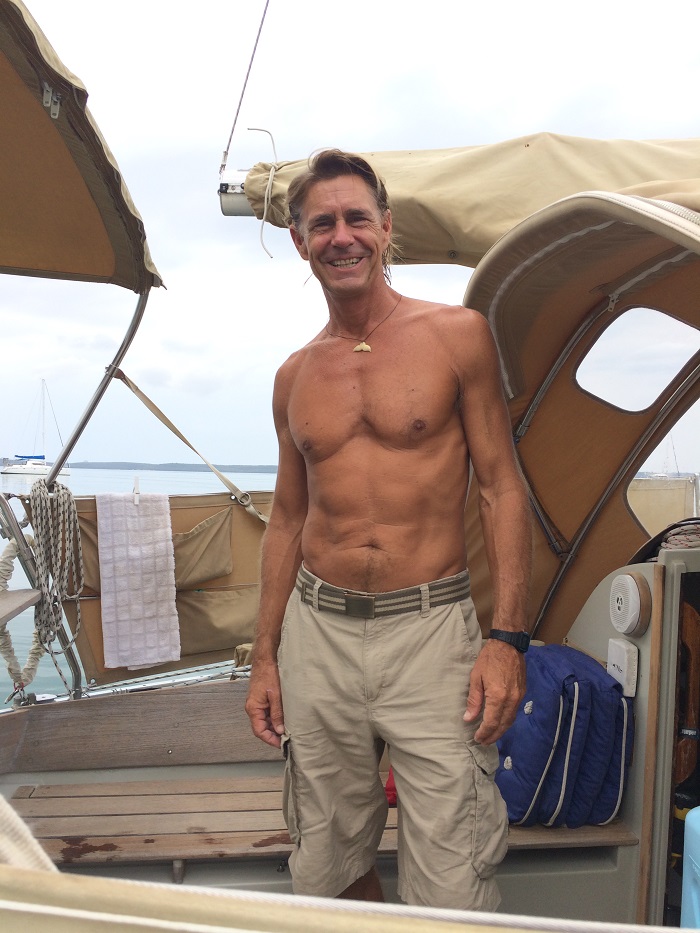 And, in the interest of full disclosure, after seeing so many vehicles loosely described as “buses”, we were very curious about what we were getting ourselves into.  It turned out fine as our “ride” turned out to be a converted Ford armored truck circa 1952 with co-drivers that weren’t even born when the truck came off of the assembly line in Detroit. 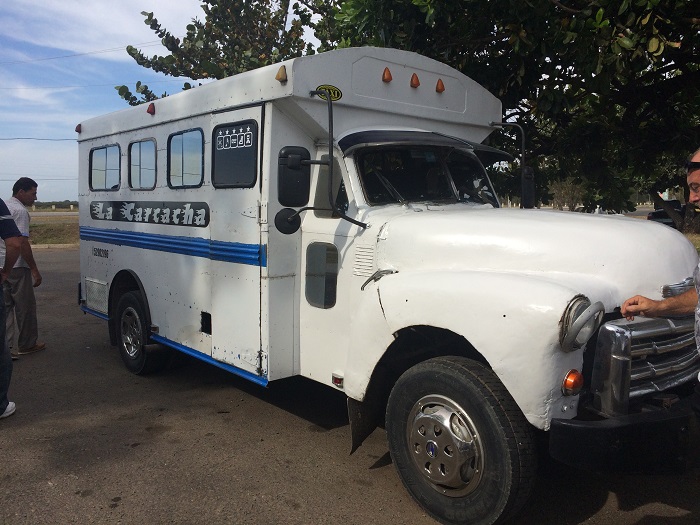 Our organizers for the trip were two hard drinking Norwegians and their “girlfriends”, Cuban girls that could have easily passed for their daughters, and that is being generous, along with additional “companionship” provided by an ample supply of beer and Russian vodka.   To further complete the picture their definition of a “Norwegan” bloody Mary consisted of ice, vodka and a whole tomato plopped into a plastic cup.  Very thrifty as the tomato could be used again and again and it was.  And, all of this was in full swing, of course, shortly after 09:00. 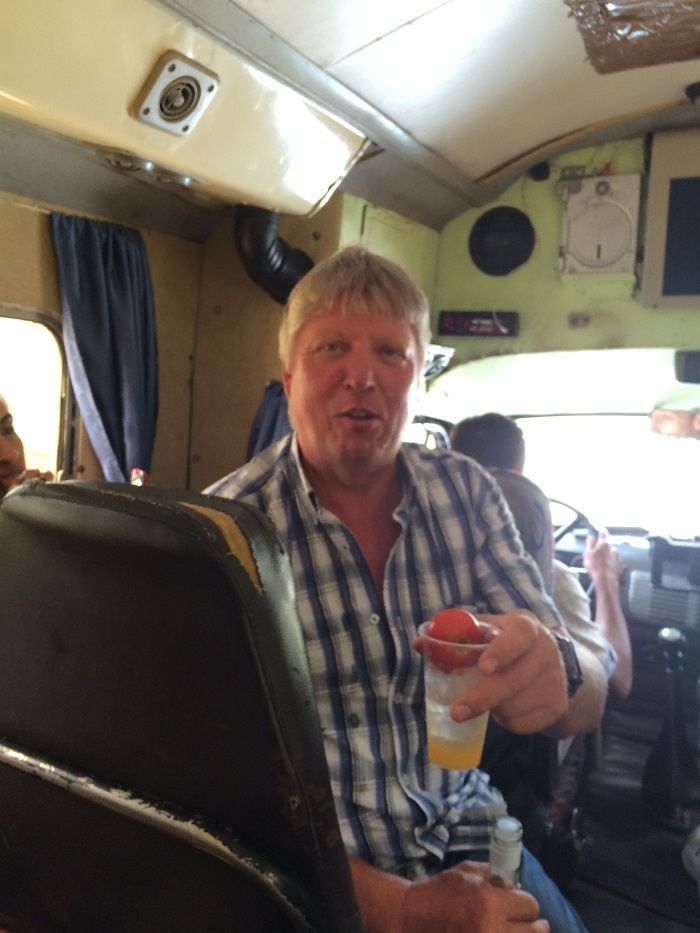 Even Brenda put on a good game face and had a swig of beer to wash down her Pringle “brunch”. 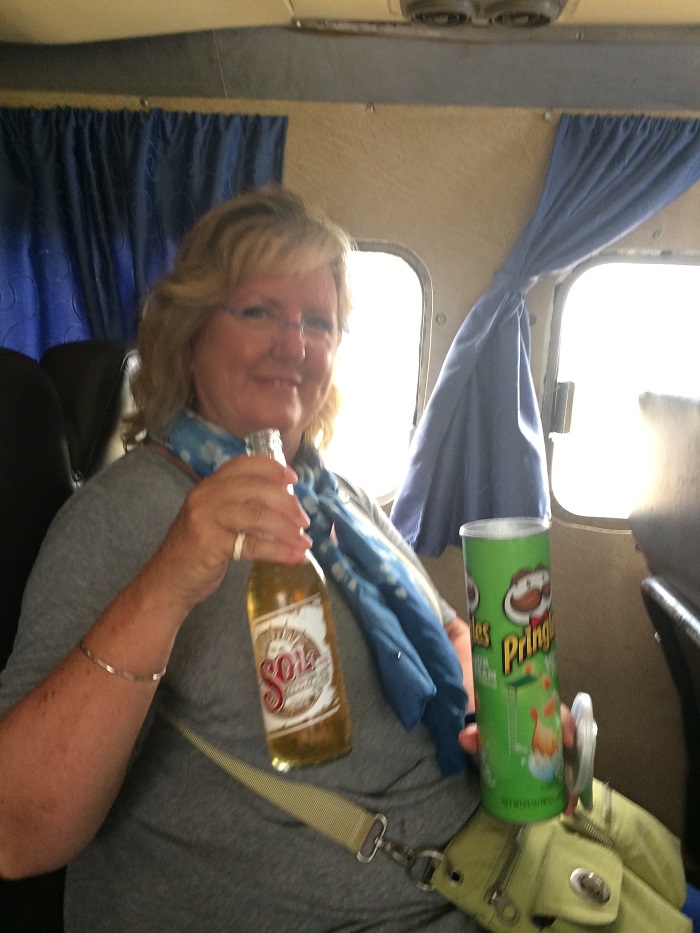 A perfect way to start the day.  Yum…Lars came along for the ride but would not be with us at the concert as he was meeting up with friends in Havana.  Sans Lars, here’s a shot of our travel companions for the day. 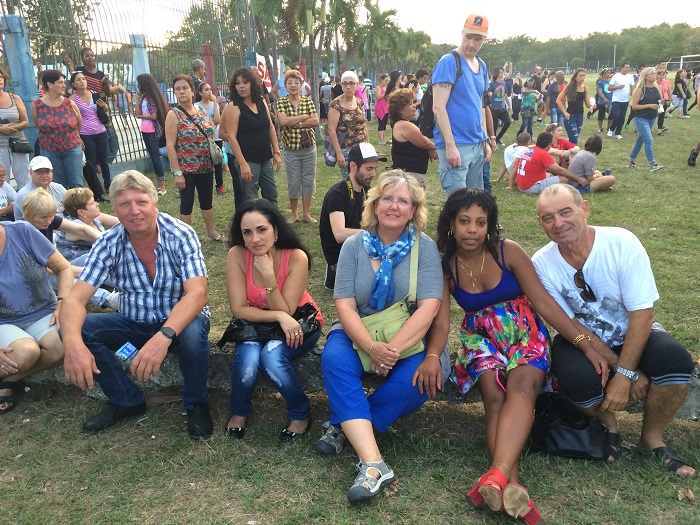 The run to Havana took us about 5 hours with quite a few “potty breaks” along the way.   No need for a formal rest-stop, any bush along the highway was good enough, even for the “girls”, Brenda excluded, of course,  good little CT Girl that she is.

The view along the “highway” such as it is, was quite interesting compared to the very mountainous landscape of Eastern Cuba with miles of flat grasslands and sugar cane plantations.   Oddly, this included a 50 kilometer stone wall built a few years ago of volcanic rock found in the nearby fields.  To see this “fence” running alongside the road for mile after mile was something to see. 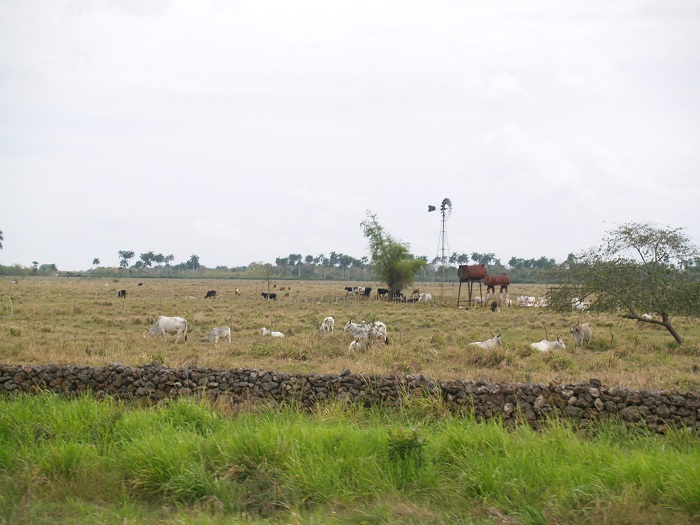 We arrived in Havana around noon and went to a seaside hotel for lunch.   Our traveling companions, and the “girls” in particular, were looking a bit wilted after a morning of heavy partying.  As my dad used to say “what goes down like honey comes up like lye”.  Yes, the beer was gone pretty quick (Editor: I did have a few beers before lunch but don’t tell my mother) and then, present company excluded, a large  dent was put in the vodka supply which turned out to be the “lye” for at least one of the girls.   Not a pretty picture, let me tell you.

The area where we ate, near the pool at the hotel, was very nice and well kept. 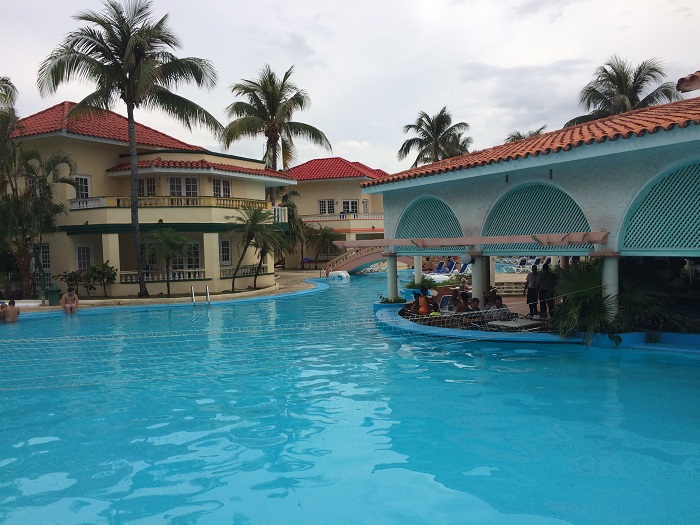 However, when I headed out to the ocean side, I got a look “behind the curtain” at a part of the hotel that had been ravaged by a hurricane some years ago.  What a contrast and a good example of how many of the buildings in Cuba look “from the other side”. 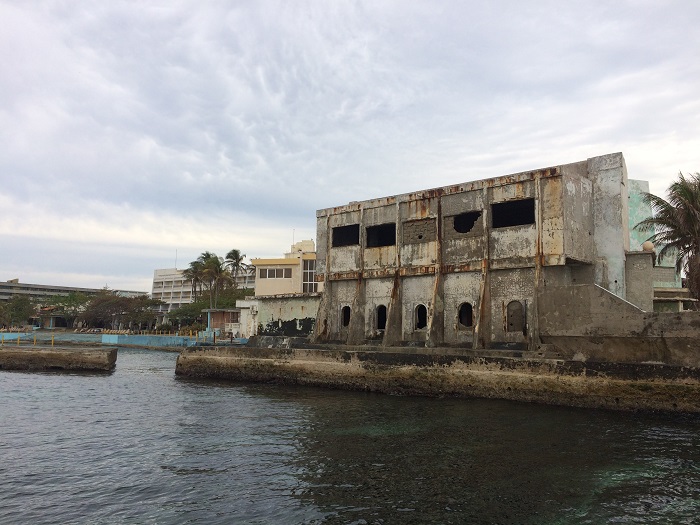 Away from the most popular tourist areas the condition of the “infrastructure” can be pretty alarming. Along the way we passed “embassy row” with some magnificent buildings.  Unfortunately, from inside our “vault” I couldn’t get many photos.  However, I did snap a shot of what I’ll call the “Che’s Inn”.  Boy, do I hope that this post isn’t seen by any “revolutionaries”. 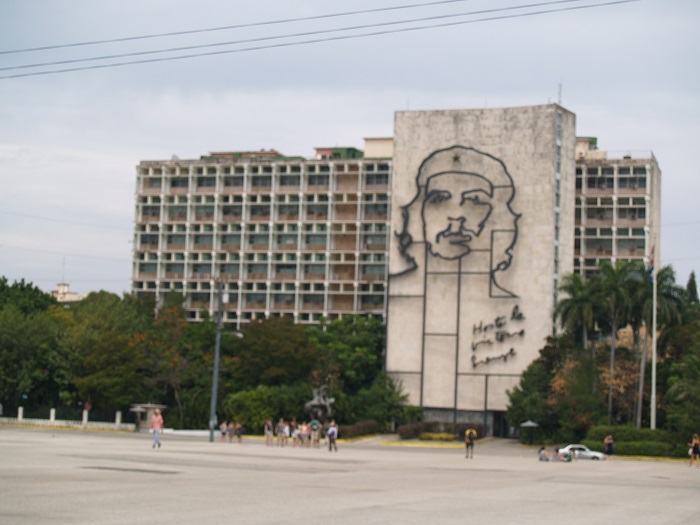 About an hour before the concert began we headed out to find a spot to watch the show.   The number of people streaming in as we arrived was just breathtaking.  I can’t even guess how many people were packed into the park by the time the show began but it could have easily been a million or more.   From where I stood, not far from the entrance to the park, I judged that several thousand streamed by every few minutes.

The air was ripe with anticipation and the stage and surrounding speakers and video screens was awe inspiring. 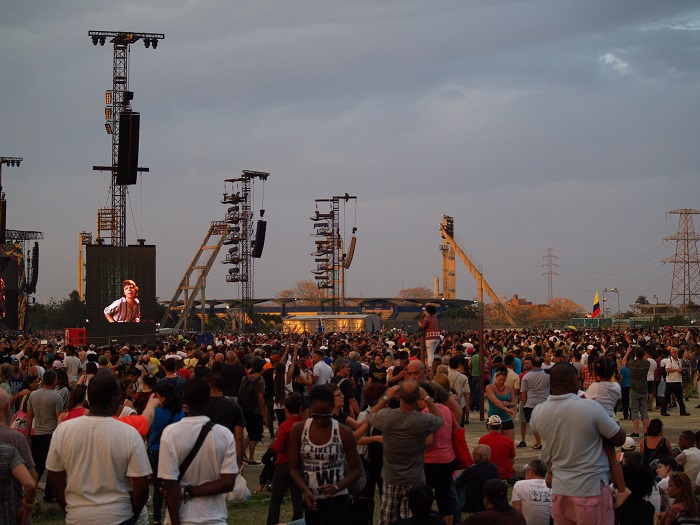 Great people watching including an intimate moment between mother and daughter. 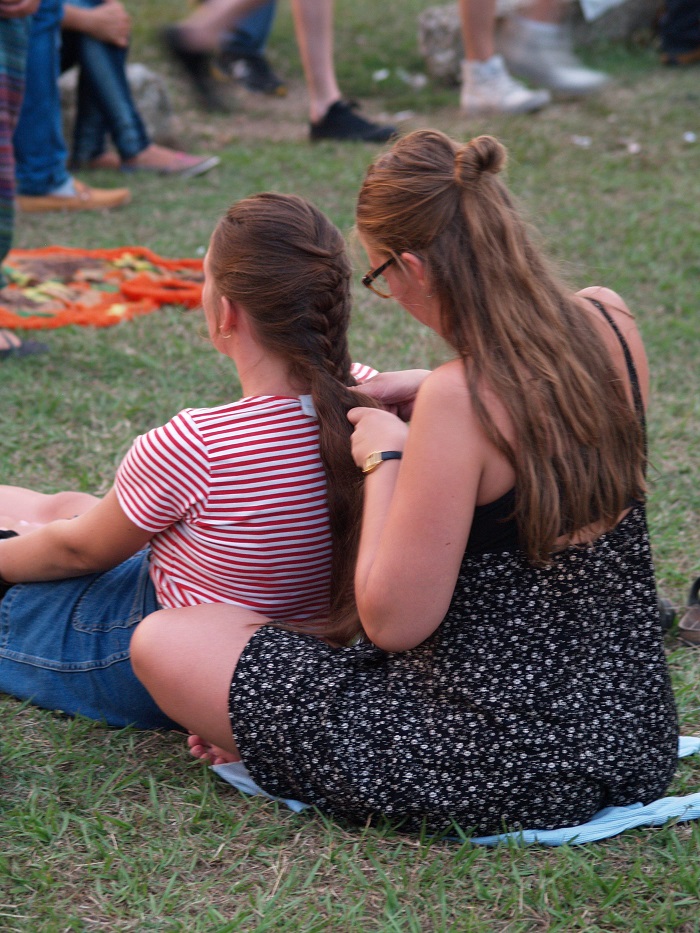 There was also a good amount of heated “discussion” between young couples, perhaps made more testy by the hot still evening air.

I was particularly struck by this Brit showing the “colors” of mother Cuba.  Perhaps a fitting metafore for what the future holds as they re-enter the world stage. 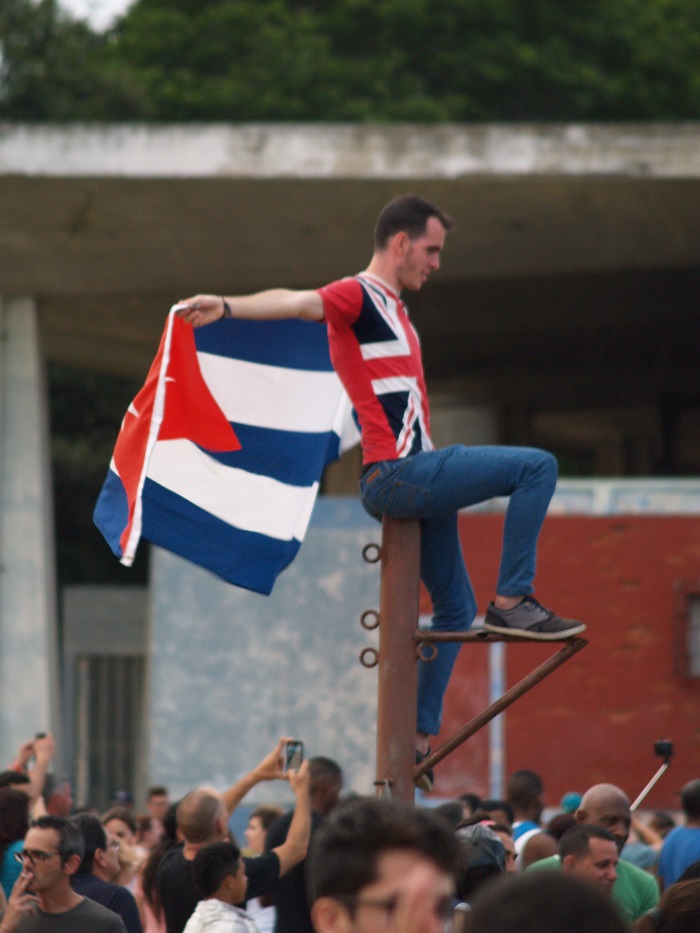 I can’t even imagine what it must have cost The Stones to bring in everything to put this show on.  Keep in mind that this concert was free so all anyone had to do was to show up and show up they did.  However, the Stones are no dummies so I am sure that they have found a way to make “free” pay very well for themselves.  Brenda and I really wanted to buy some t-shirts but we never even saw a concession stand of any sort.  Perhaps we arrived too late or were just too far from the stage.

One thing I am sure of is that the Stones don’t do this “just for fun”.  Although, it sure seemed that The Stones were having a great time on the stage. 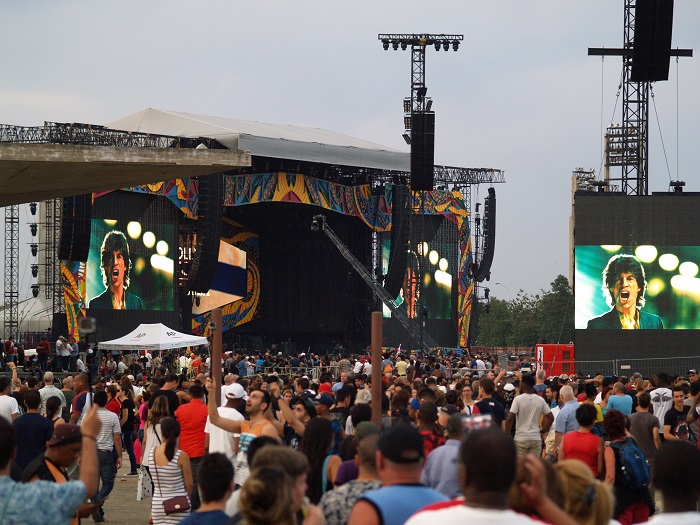 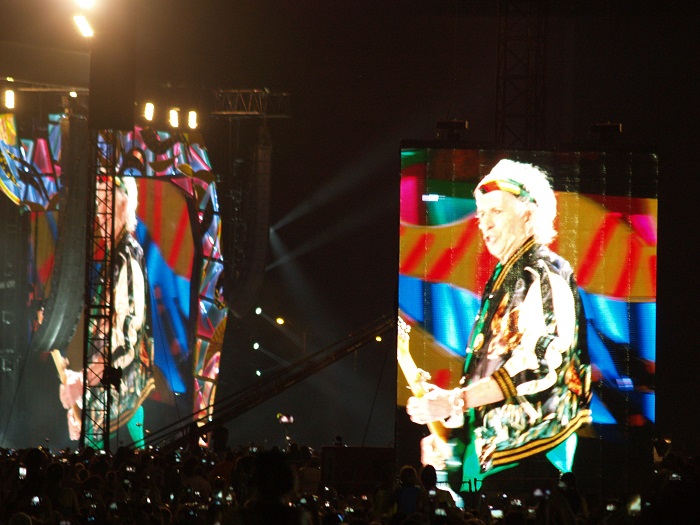 While we were a long way from the stage, we had a great view and had no problem hearing the music and what great music it was.

It was an amazing show, I have to say.  Unfortunately, our “tour organizers” decided to leave early with the hope of getting out of town before the “rush” and we made our way back to the “rendezvous” spot only to find that the “bus” was nowhere to be found.  We finally were able to connect with the driver but it took about two hours as the cell lines were totally overwhelmed by a million others trying to make calls as well.

We finally connected with the bus around midnight and headed back to Cienfuegos.    Oh yeah, I forgot to mention that armored cars are designed to carry very heavy loads so the shocks are set up, to be kind, very “firm”.   So rough, in fact, that Brenda’s pedometer was registering every bump in the road, 37,000 of them before we even arrived in Havana.  That’s a L-O-O-O-O-O-OT of bumps.

By the time we made it back to the marina it was about 03:30 and we were TOTALLY ready to hit the rack but not before I took a quick and very bracing cold shower to rinse off the grime of the day.

All and all, what a “trip” it was for a couple of “60 somethings” and, for sure, one that will be tough to beat.   When we were planning our trip to Cuba I can tell you that Brenda and I NEVER imagined that we’d be seeing the Rolling Stones LIVE along the way and just one more example of how almost nothing is as we expected here in Cuba.

Yes, Cuba is changing and we are very lucky to be here to experience it first hand, if only in a small way, as it unfolds.

13 responses to “The Rolling Stones play Havana Cuba.  And, we were there!”