It’s Saturday mid day and it’s blowing like stink here in Ft Lauderdale.  We have now been here for ten days waiting to cross to the Bahamas and while there was actually a weather window a few days after we arrived,  we just weren’t quite ready with provisioning the boat and were still collecting all of the items that we had shipped here in advance of our arrival.  As we flew down this year, instead of driving, we had to send things ahead as we wanted to limit the number of bags that we had to schlep on the plane.  That meant that we had a parade of stuff arriving at the local UPS store.  They sure loved us at $5 per package.

Anyway, we are ready now and all that has to happen now is for the wind and seas to settle down following the cold front that’s passing through today.  According to Chris Parker, the weather router, we expect that things will improve sometime tomorrow, Sunday afternoon..    The best departure time is a bit fuzzy as if we leave when the wind drops on Sunday afternoon we will still have to contend with some residual seas in the Gulf Stream as it takes some hours for the wind driven seas to subside once the wind drops.    A Monday morning departure would actually be a lot more settled but there is a risk that we will then have to contend with building east winds as we cross the Bahamas Banks, on Tuesday before we reach our destination about 20 hours after we leave Ft Lauderdale.

So, the choice seems to be rough seas in the Gulf Stream with a Sunday departure or building head winds in the final 6-8 hours of our crossing the Bahama banks if we leave on Monday.  It’s a tough call and I am not sure which will be the most comfortable or should I say, least uncomfortable for Brenda.  Perhaps taking our lumps in the early hours of the trip and having the rest be more settled is the best option but Brenda’s surely not going to like a “washing machine” at the beginning.  One way or the other, we have to move or we’ll be here for yet another week, something that neither of us wants.

Today is a terrible day in the Gulf Stream with seas running in the 15’ range with gale force winds.  Now that would be horrible and something that I don’t even dare contemplate, with or without Brenda aboard.   Here in the harbor, sustained westerly winds are expected to peak around mid day at nearly 30kts.   We are paying very close attention to everyone around us to be sure that we don’t end up tangling with another boat.

There is one big ketch in particular, with nobody on board, that I have already had to up anchor to get out of his way at least once.  He has a small anchor and short scope so he’s been dragging slowly around the anchorage with each wind shift.  It’s amazing how cavalier some people can be about leaving a boat unattended.   I sure hope that I don’t end up my dink pushing him away from us if he drags yet again.  I guess we’ll have to keep our fingers crossed and dink ready.

Anyway, how about this?   What’s a post about Ft Lauderdale without a few shots of some of the “big boys”.   Nice “dink” aboard this one.  “Off to the market James and quick.  We are just about out of Grey Poupon.” 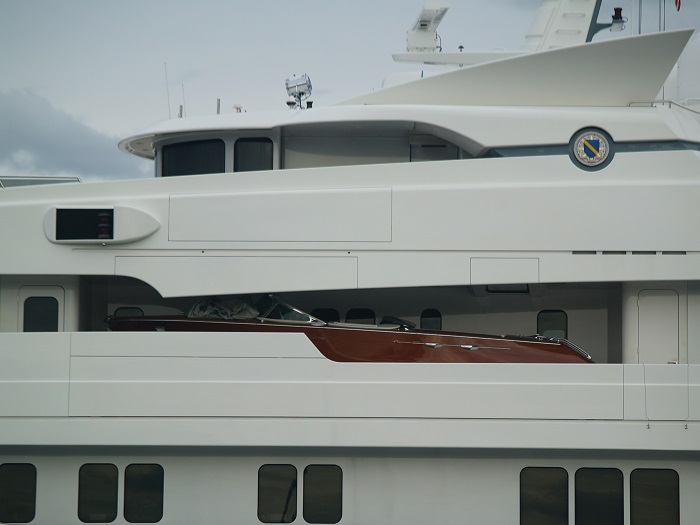 Of course, if you’re yacht is “mega” it just has to have it’s own garage for your toys. 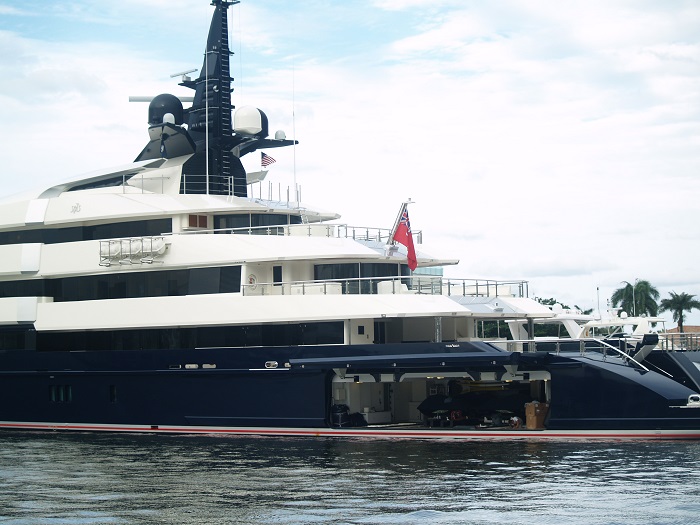 How about a peek inside?  Amazing display of wealth. 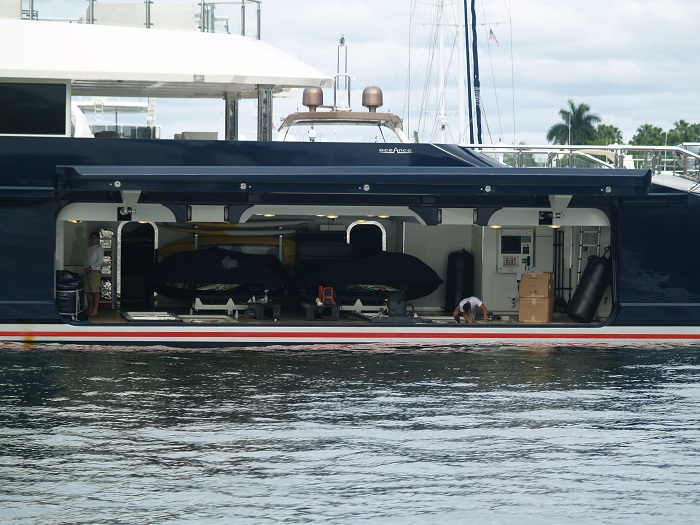 In a post recently I mentioned that I was submitting what I believe is the last item needed to complete my approvals to go to Cuba, a form required by the U.S. Coast Guard.  I filled it out with the date of my departure port in the US, my plan to visit the Bahamas, when I’d be arriving in Cuba and where I would clear in.   I also indicated when I’d be returning to the U.S. and what my arrival port would be.  The next day I received a call from a USCG officer stating that I must submit the form a minimum of two weeks prior to departing for Cuba.  Oops, I was leaving in four days.   However, with further discussion she agreed that my actual date of departure was the date that we will be leaving the Bahamas, over a month from now, to head to Cuba.  All well and good but I still had to resubmit with corrections.  Great!

The problem is that the form isn’t up to date with the current laws, which are changing quickly.  So, like a good law abiding citizen, I filled out the form again and sent it in a second time.  And, that might not be the end of it.  If any of our dates vary from those on the form by more than 5 days, I have to do it all over again, and two weeks in advance of those dates.  Yikes!  It’s nearly a “catch 22”.

Are you kidding me?  I have submitted each form at least twice and it’s taken months to sort through everything.   And, it’s not over yet…

A few folks have commented on all of this, both on this blog as well as my posts on Facebook, stating that I should “just go”.  I have asked officers in the various departments I have been dealing with what they thought of that and the answer is universally, “good luck with that”.   The fact is that Cuba is still off limits to us and the only way to be sure you won’t get in trouble is to carefully follow the ever changing rules, as annoying and tedious as the process may be.

So, as we prepare to head to the Bahamas I am hopeful that I have indeed “crossed all of the T’s and dotted all of the I’s.  Well, for now fingers crossed that I have done this right.  If not, it won’t be for a lack of trying.

I expect that the next post I do will be from the Bahamas.  Until then, I’ll close with a shot of some of the locals listening with rapt attention to my every word as I described the approval process to them in the park the other day. 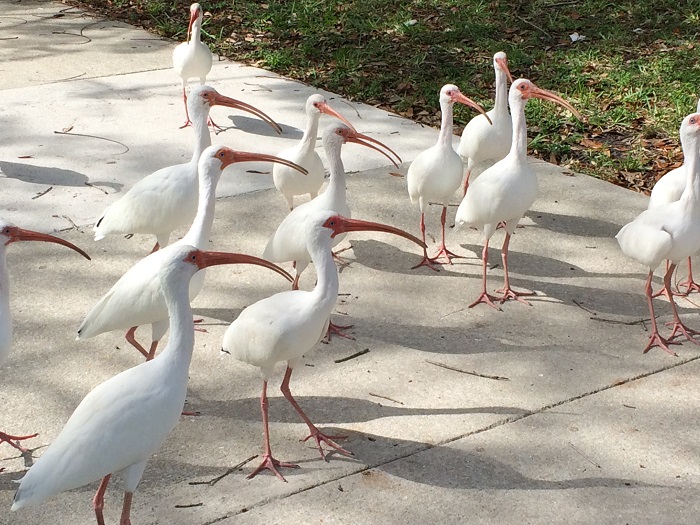 Ok, ok, one more photo.  This one of of a lovely sunrise a few days ago.  Yes, this is the mood I am looking for. 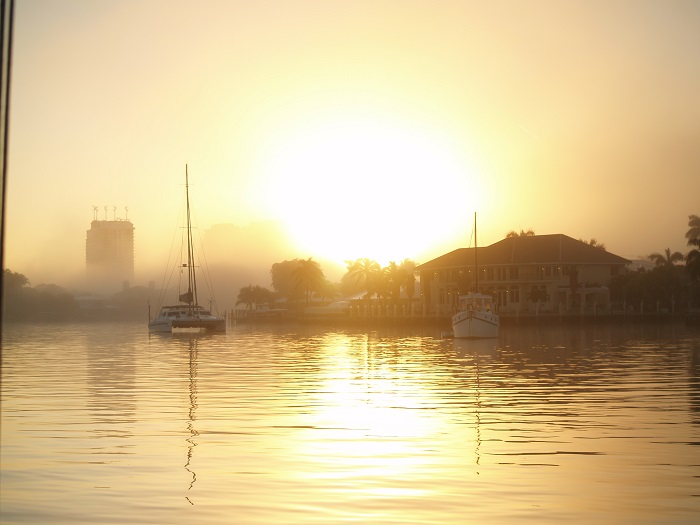 For now, it’s blowing like stink but here’s to a “reasonable” crossing.  Fingers crossed.

One response to “Bahamas bound and fingers crossed”