Nearly ours… Pandora and a new era.

It’s Thursday morning and today we should see the final paperwork in order to transfer ownership of soon-to-be Pandora to us.  It seems like much longer than the week it’s been since we first arrived here in Ft Pierce on the 21st to become familiar with Ariel and have her surveyed, the Aerodyne 47 that we have purchased.

It’s been since mid December since we first learned that the boat was seriously for sale and that Miles and Loreen were going to move on from the boat that they had lived aboard for the last seven years.

Ariel, as she has been known until now, was built about the same time that we took delivery of Pandora, our SAGA 43 and she was only about a year old when we first saw her in Great Salt Pond Block Island.  She’s a very unique boat and I was attracted to her design as a standout from most of the “Clorox” bottle boats that are so common these days.   I would have never imagined that we would one day own her, or should I say “she would own us”.

Well, now we are owners of an even larger “money pit” and I expect that dollars will flow as fast as she sails, which is pretty fast indeed.

I have been living aboard here in Ft Pierce since Brenda left on the 23rd, about a week ago and have been slowly acclimating myself to the many complex systems aboard.  One particular issue that came up in the survey was that the muffler was leaking.  I agreed to take the boat and make the repair myself although it was anything but clear as to how I was going to get the old one out and replaced.

At first I had hoped that I would be able to do a temporary patch to the rusted area and save a more permanent repair for when she is hauled in Ct after I get home.  However, what was a slow but steady drip became a gusher as I used a wire brush on the suspect area.  Here’s what the muffler, about 2’ long looked like when it was FINALLY removed from the boat.  Such is the life of “stainless” steel. It was in a very inaccessible spot and required some surgery and a good amount of cabinetry removal to coax it out.   As hard as it was, I was expecting that it would be much worse. 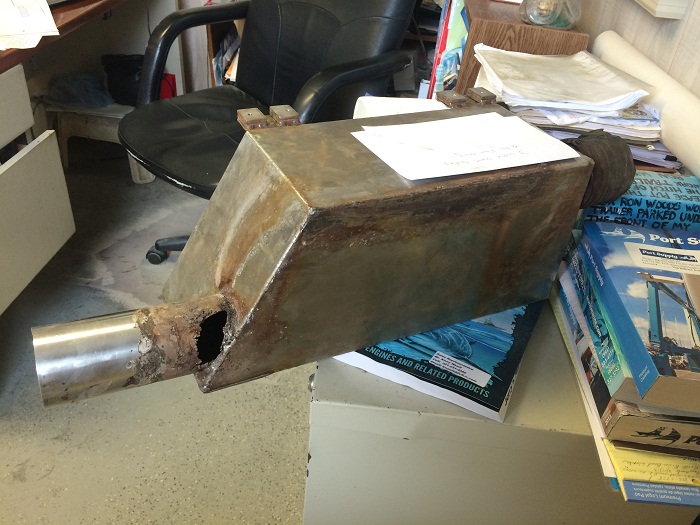 I am very glad that I am a “handy guy” as to pay someone for the whole job would have cost at least one “boat dollar” perhaps more.

As you get closer you can see the hole, a nasty gash about 2.5” wide.  Imagine what sort of mess this would have created, had it given way when we were at sea.  It would have been a bad day indeed. 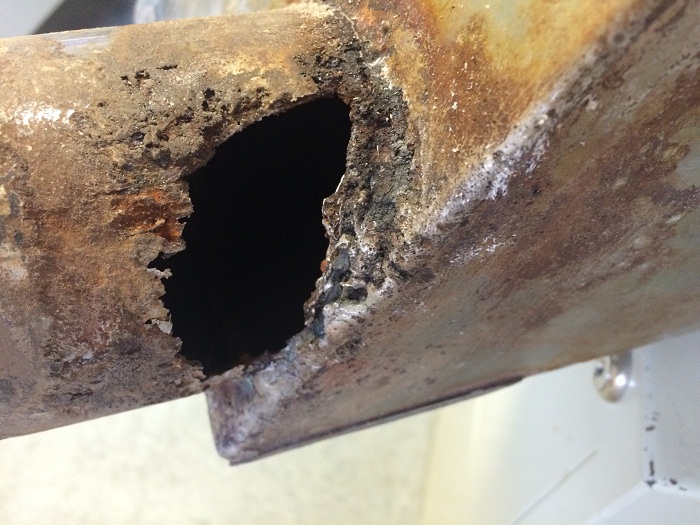 Finding this leak that wasn’t clear at all unless you were really looking for problems, shows the value of a good surveyor.

Here’s the new muffler, made of fiberglass.  Note the sleek delivery vehicle.  I have made many runs to local stores with this great set of wheels.   It’s such fun to ride around on this with temperatures in the low 90s. 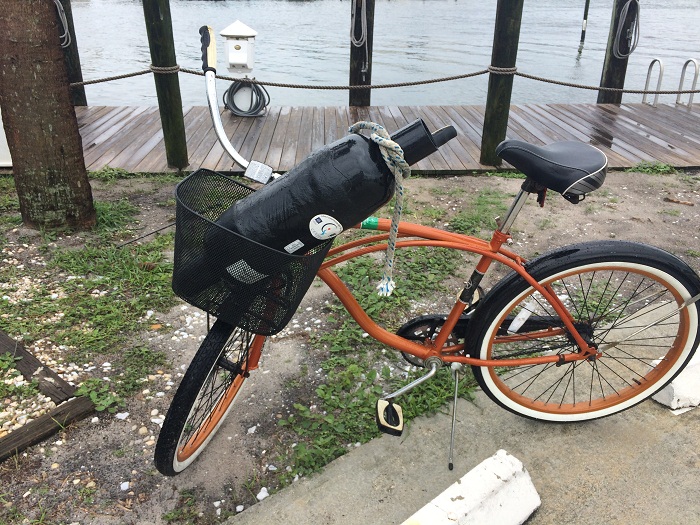 Happily, it’s now all set and things are back in order and it went back in a lot easier than the old one came out.  As near as I can tell, and I sure hope I can tell well,  that’s about the worst of it.

As I have mentioned, a big draw for us in wanting this boat, is the hard dodger to keep us comfortable and out of the weather when things get nasty.  How about the night lighting?  “Beam me up Scotty”.   I love it. 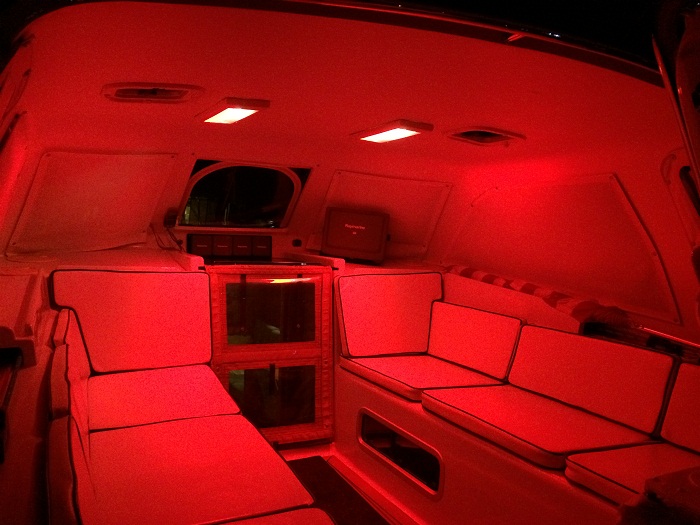 Yesterday as I was doing some errands I happened on a farmer’s market at the Ft Pierce waterfront park. There weren’t a lot of farmers in evidence but there was one vendor selling carnivorous plants that he grows from seed.  I understand that, as they sit in 3” pots, they are about 4 years old.  That’s a long time to grow something that you sell for $10.   I hope that he has a day job too.

This one is the well-known Venus Fly Trap.  Really neat. 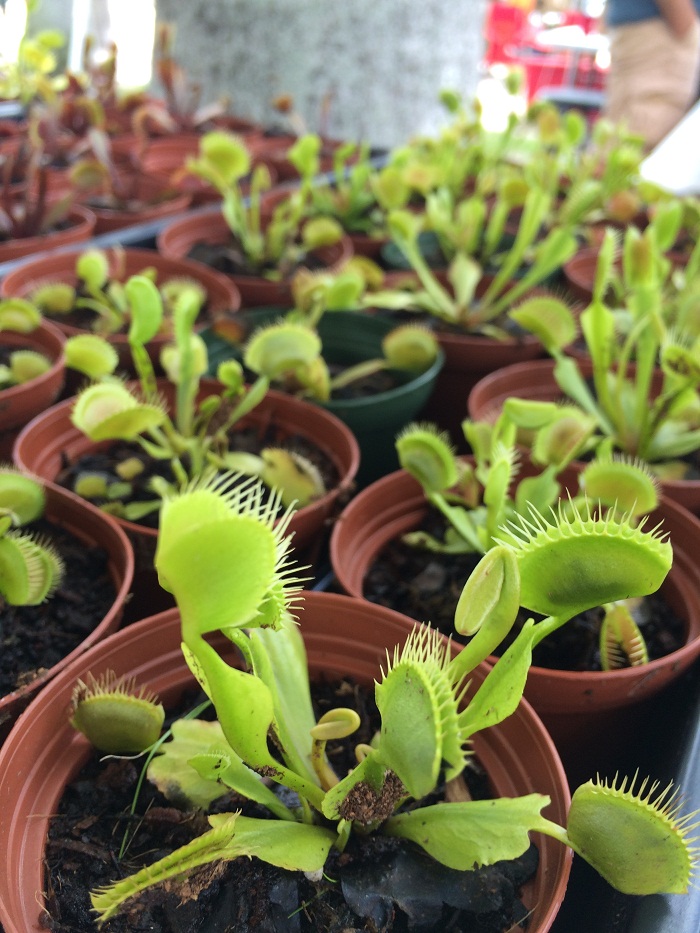 How about the veining on this pitcher plant?   Love it. 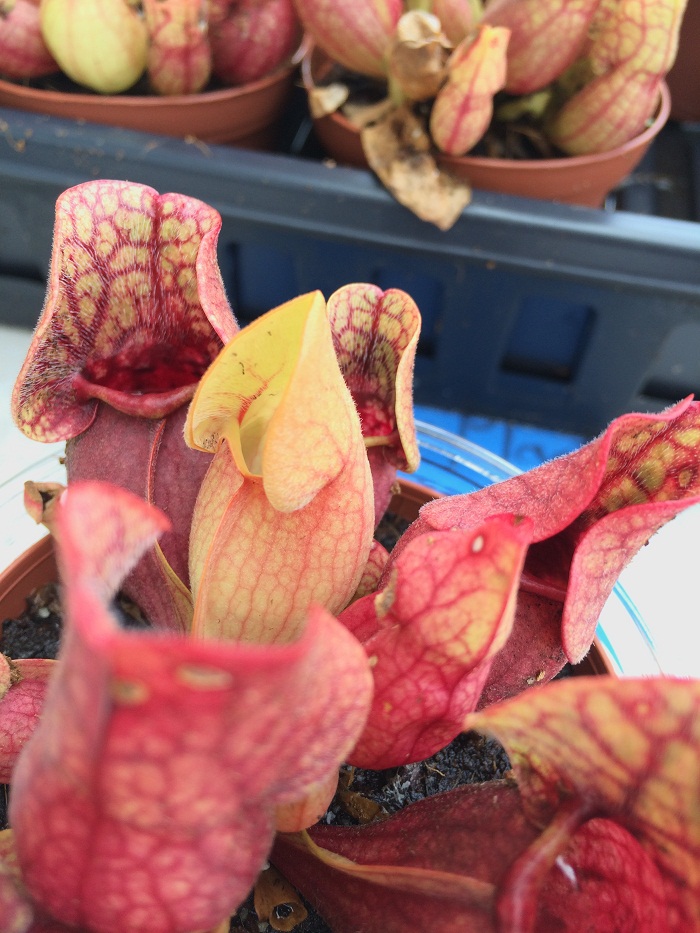 For over 20 years we had a greenhouse at our home tried our hand at growing various pitcher plants.  However, they were the tropical variety and not these delicate more temperate varieties that require pure rain water to thrive.

So, with all of the paperwork scheduled to be sewn up today I will move Pandora over to another yard tomorrow for a few days to have davits put on to hoist the dink as well as to serve as a platform for more solar panels.  It’s our plan to put enough solar on board to make her as self sufficient at anchor as our last boat was.  The new logo will also be put on and the name, Ariel, will be taken off.

Crew arrives on Sunday and it is my hope that a good weather window will open up by mid week so that we can get going on our run north to CT.

It’s been a while since I posted a sunset shot as it’s hard to get one in a marina.  However, I was struck by how dramatic the clouds were last evening as a backdrop to all the masts in the marina. 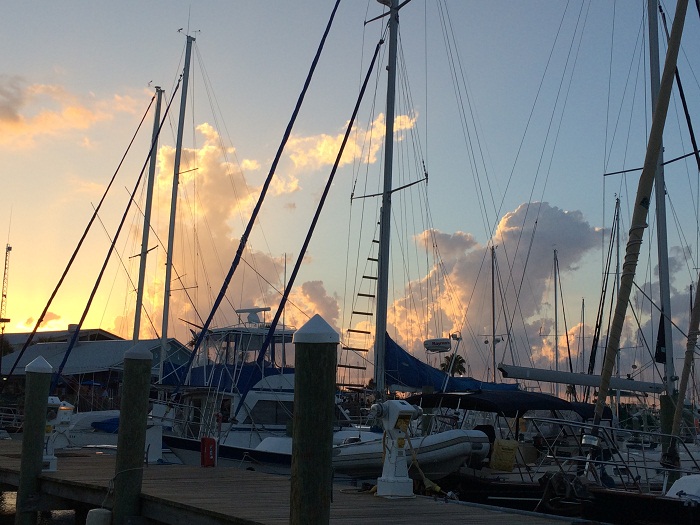 Well, it’s certainly the beginning of a new era for us.  Let’s hope that it’s smooth sailing.  actually, Brenda’s counting on the “smooth sailing” part.  Wish us luck.

3 responses to “Nearly ours… Pandora and a new era.”