>While we were in the Keys last week with our friends, we took a day trip down to Key West.  Grassy Key, where we were staying, is about half way between the bottom of Florida to Key West so the drive down to the end of the island chain and Key West was about two hours and a world away.  Unfortunately, much of the Keys Highway is just one long strip of small motels, dive shops and a mess of generally unattractive roadside real estate.  However, once you enter Key West the world changes and you enter an amazing world of blue water, eclectic lifestyles and wonderful 1800s architecture. 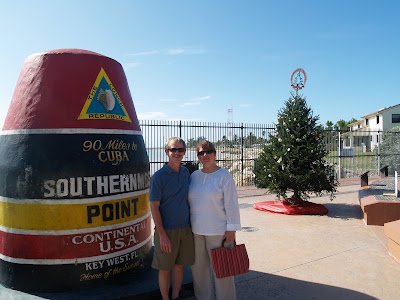 It was fun to stand and have our picture taken at the southern most point in the continental US. It’s only 90 miles from here to Cuba.  Needless to say, the Navy has a major presence here as well.   They don’t want Fidel to forget that we are here. 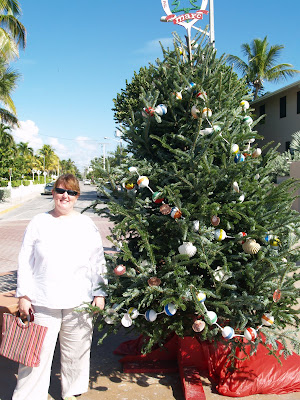 This is the southern most Christmas tree in the continental US. 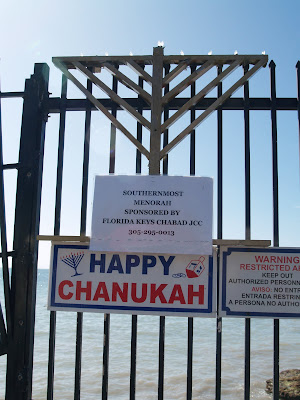 This is, you guessed it, the southern most Menorah in the continental US.  Yes, there is considerable competition for the “southern most in the US” designation. 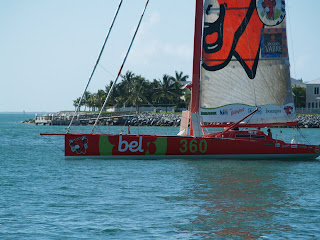 There’s loads of boat traffic all around the tip of Key West with dive boats, private sailboats and this amzaing IMOCA 60, a state of the art ocean race boat out for a day sail.  I think that they must have been taking out sponsors or paying clients as a chase boat went out to it and changed passengers.  I took this photo from the deck where we had lunch. 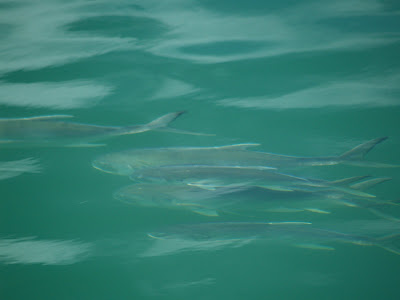 Just off of the city marina dock there were tremendous tuna and tarpon.  No kidding, the tarpon were five feet long and the tuna three to four.  It seems that these fish are fed at the docks as if they were ducks in a city park.  These fish were just amazing and the biggest that I have ever seen in the “wild”.  That’s if they can still be classified as wild given the fact that they get fish kibble tossed to them daily. 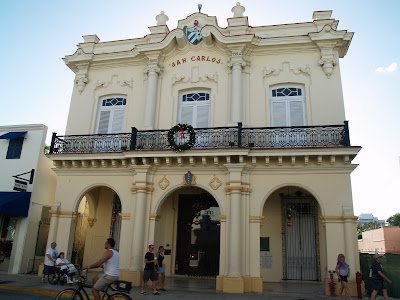 The area is jammed with all sorts of amazing old homes.  Given the hurricanes that come through this area nearly every season, it’s hard to imagine that they still are intact after 100 plus years. 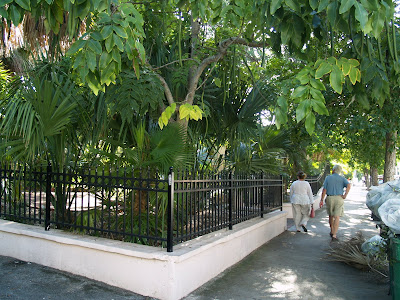 Another wonderful tree lined street scene with Brenda and Port walking and taking in the sights. 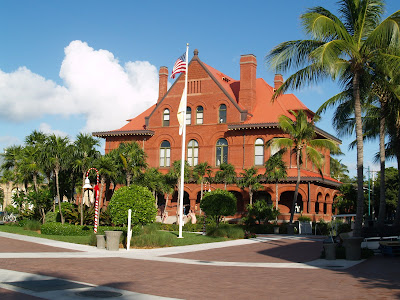 You have to wonder who lives here.  Clearly, there is a lot of money in Key West. 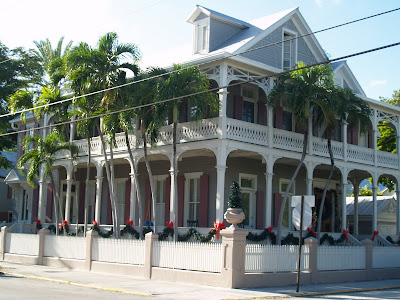 Quite a few wonderful historic hotels.  In fact Key West served as the Winter White House for Harry Truman.   At that time, the Navy had a massive presence and took very good care of the visiting president.  Today there is a section of the town called the Truman Annex, and it’s very, very exclusive. 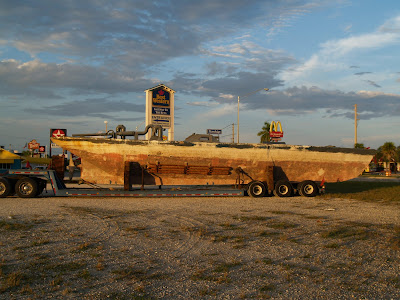 Well, what would this be? It is a drug running boat captured by the Coast Guard off of Key West with 10 tons of cocaine.   It’s over 60′ long and was built in the Columbia jungle out of fiberglass.  It’s very roughly constructed and obviously built for a single use.  It’s designed to float almost submerged with just the deck showing a above the water’s surface.  What a miserable trip that must have been.   Not as miserable as getting caught, I would think. 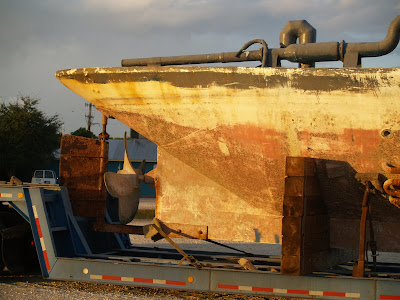 You have to wonder how many of these have been built as this was one that just happened to be caught.   Notice the massive prop, it’s about four feet in diameter.  The grey pipe on the back deck is an exhaust for the engine. It’s so large that I expect that it was quite quiet, but not quite quiet enough.  The air intakes stick up high so that the engine can run even though the decks are awash under the weight of the cargo.  You can see the line just under the deck that must have been the waterline when fully loaded. There’s a small hatch midships that looks like a conning tower on a sub for the pilot to see out of while steering the boat.  Not surprisingly, no evidence of running lights.
Of course, what posting of a visit to the Keys is complete without a picture of a sunset?  Setting aside the no-seeums that come out each evening but held at bay (sort of) by bug spray, the view is just amazing. 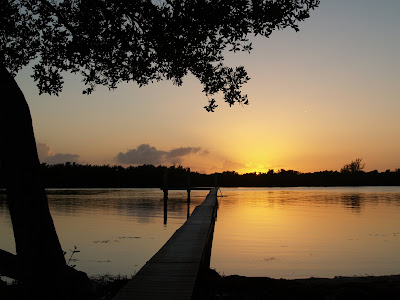 Hopefully, the winter will be short and the end of March, and the launch of Pandora will be here soon.  The snowstorm that we had last evening makes me less optimistic as I am told that Annapolis is covered with two feet of snow.   Not encouraging at all.
This entry was posted in Uncategorized. Bookmark the permalink.