Our last visit to Oriental on Pandora…

It’s Thursday morning and Pandora is secure on one of the FREE public docks here in Oriental.  We arrived yesterday after a short 35nm run from the bight of Cape Lookout.

Our visit to Cape Lookout was wonderful, if a bit cool and rainy.  Perhaps that was for the best as the weather certainly enhanced the primeval mood of the place.   That’s Brenda way-out-there…  “Brenda, can you hear me now?”  Nope… 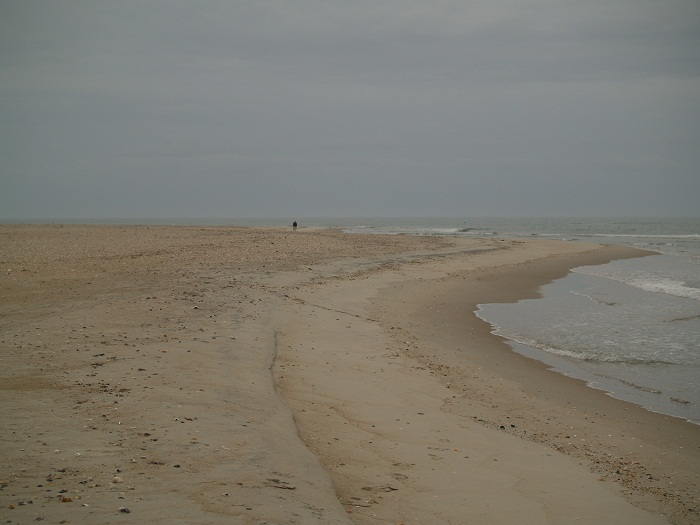 Lots of sea birds.  These are migratory terns, visiting from the Arctic, I think. Don’t ask me what type as we left our bird book home in CT.  Oh well, let’s just call them terns for now. 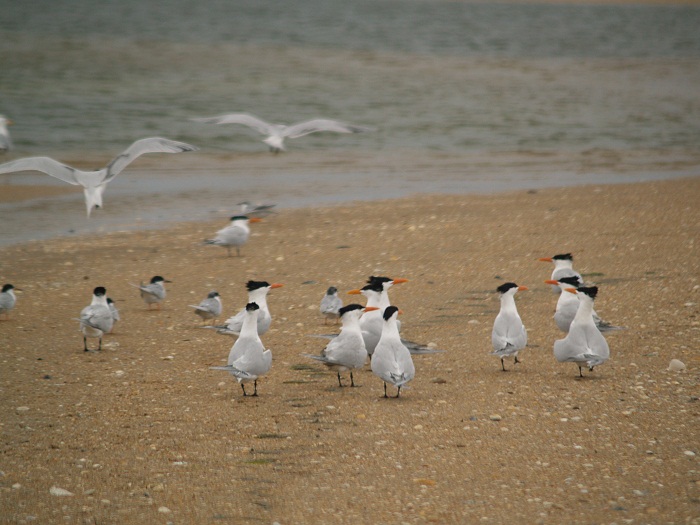 Many dolphins visited us while we were anchored.  It’s maddeningly difficult to get a good shot of these beautiful animals.  This is a dolphin fin, in case you can’t tell.  I guess you had to be there.

Brenda and I took several walks on the beach, especially to so some shelling.  Of all the beaches we have visited, we have never been on a beach with more shells.  The selection wasn’t that great but there were tons of them.   This shot is of one particularly rich area.  Loads and loads.  “Bob, is the picture upside down?”  Not sure. 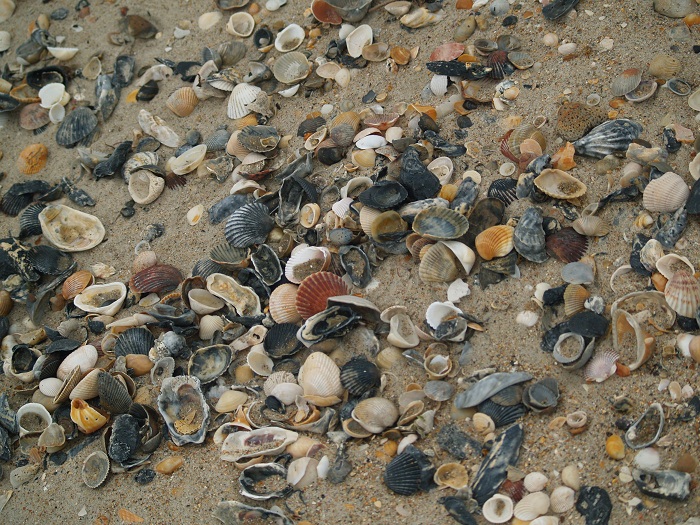 With the exception of a few campers we had the beach to ourselves.  No exaggeration, the beach went on for miles.   Pretty amazing.  Why someone would choose to camp on sand is a mystery to me.  Sand on my feet is bad enough.  Sand EVERYWHERE… Yuck!.  . 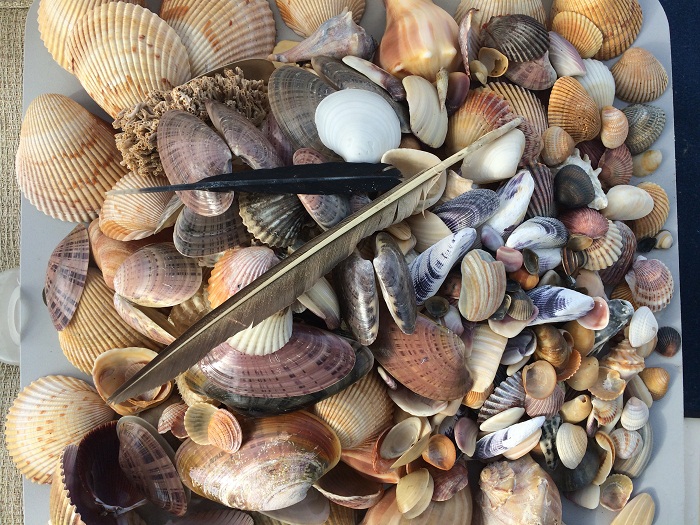 What a great lighthouse and newly painted. 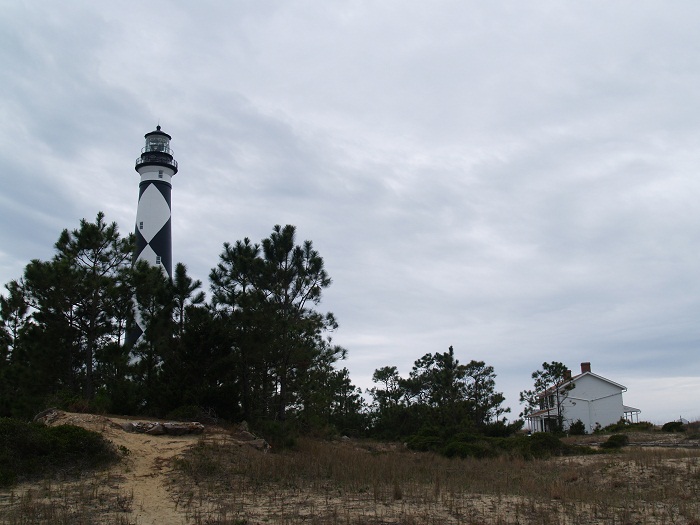 Brenda “set a moment” on the keeper’s house, now museum. 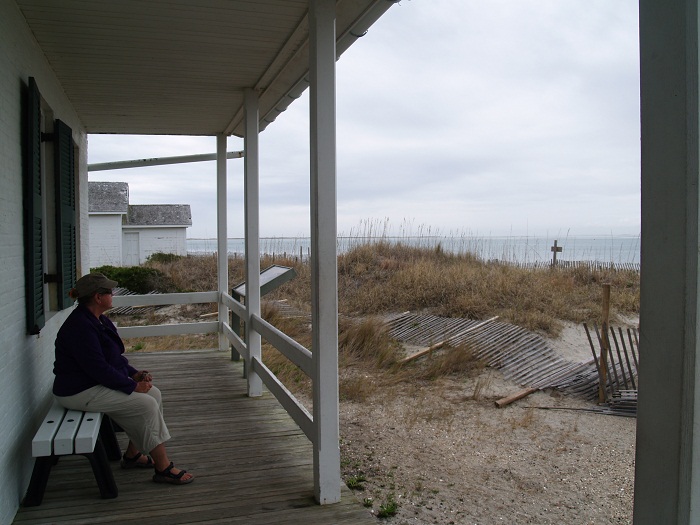 Back in the “pre GPS” age, mariners would spot a light during the day and to help them identify, sort-of where in the Hell they were, each was painted with a distinctive pattern.  Cape Lookout light, all 185’ of it, was painted with a very distinctive diamond pattern.  The white diamonds were oriented north to south and black to east to west.  Or was it the other way around?  Not certain.  Sure glad that we have a plotter and GPS.

Big painted diamonds on a 185’ tall lighthouse or not, literally hundreds of ships foundered on the nearby shores.   Happily, not Pandora.  However, when we were leaving yesterday morning, we had to pick our way out of the bight in fog with a visibility of about ¼ mile for the 6nm to Beaufort Inlet.    The sunrise was spectacular.  At least I think it was the sunrise.  Hard to say in the fog. 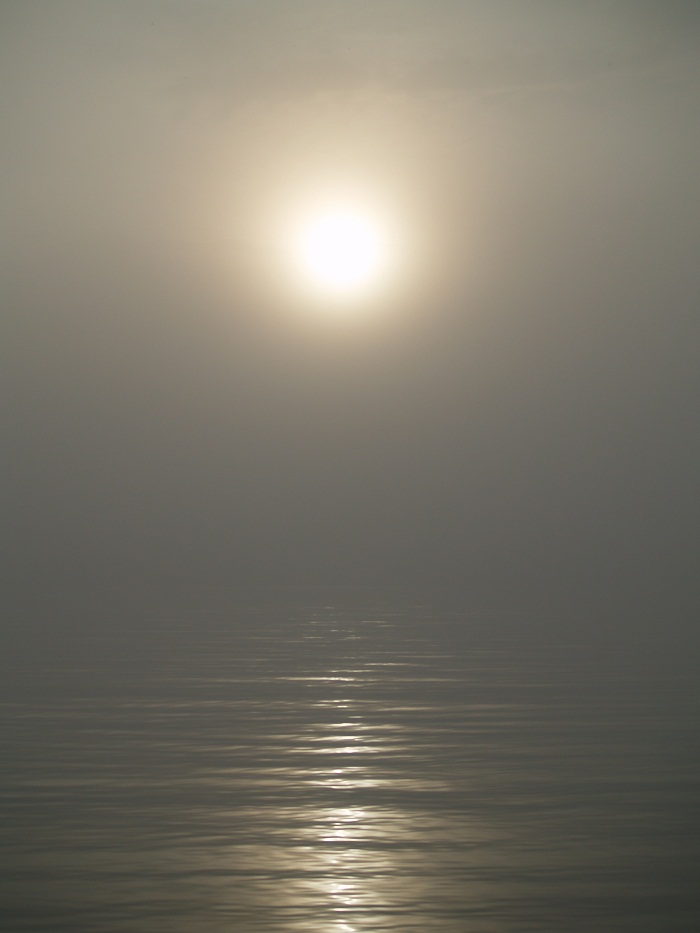 We had heard on the radio that the Coast Guard was re-positioning markers in the Beaufort inlet so we were cautioned to be particularly diligent as we came up the channel.   I wouldn’t want to bump into them.  The ship made the huge marker look positively diminutive.  Either that or the people on deck were Lilliputians.   Hmm… 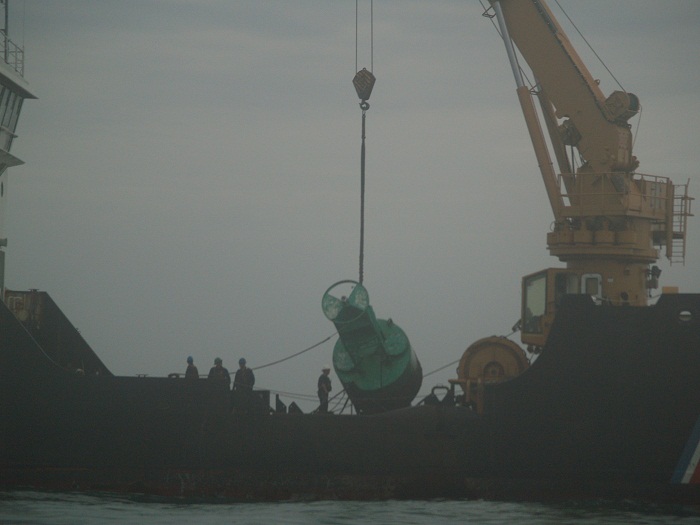 It wasn’t long before the ship faded into the fog. 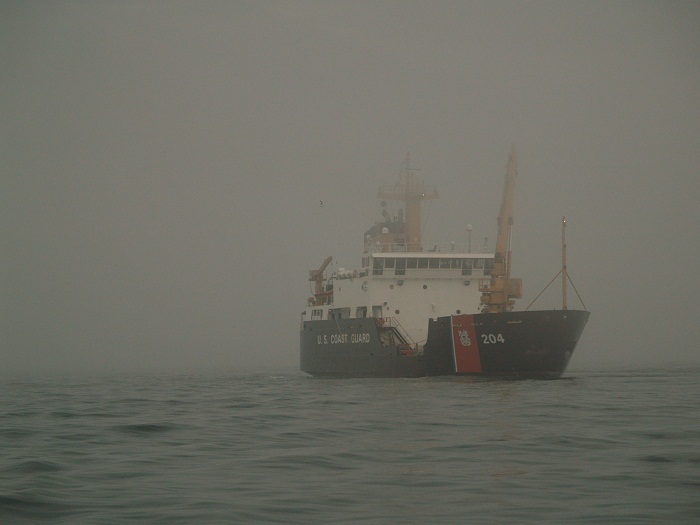 As we made our way through the marsh, north of Beaufort, we enjoyed watching the homes go by.  “Dammit Gladys, why does everything that comes into this house have to be in frigging primary colors?” 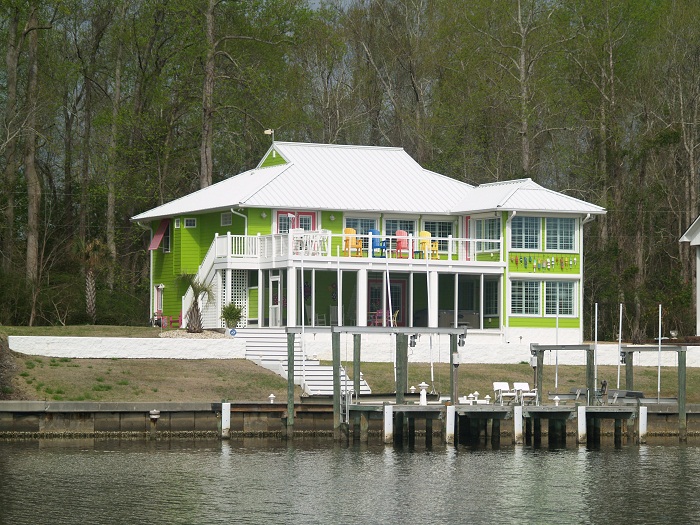 Anyway, we are now in Oriental, home to “free docks”.  Now, that’s not something that you see in Martha’s Vineyard.   Nice dock tucked next to the commercial docks.  Can you say “big red boat”.   Sure makes Pandora look teeny. 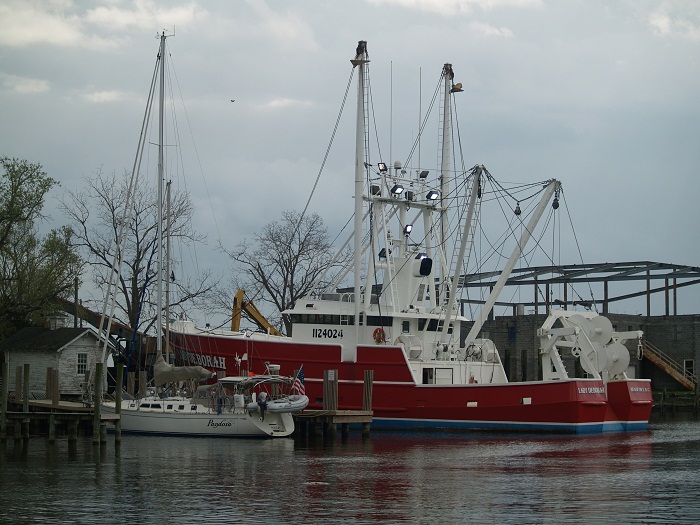 We met a nice gentleman across the dock from England who “crossed the pond”  a while back and is now sailing in US waters with his black kitty.   Mogs, a cute little boy kitty, visited Pandora and perched on the sail cover.  Nice kitty… 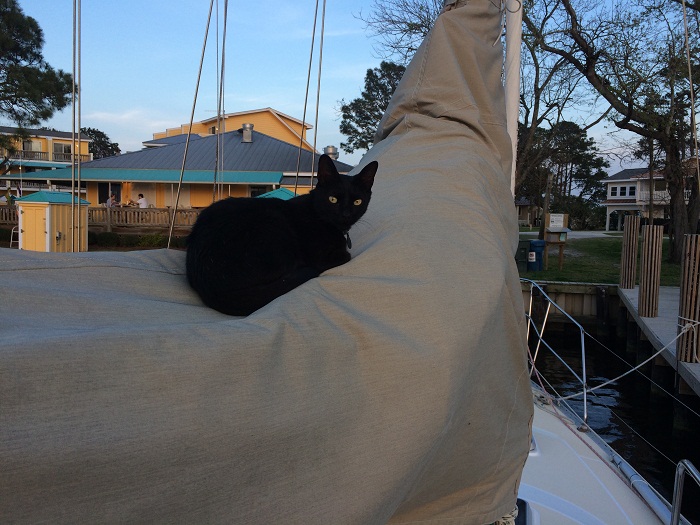 We couldn’t tell if this tern was scolding Mogs or asking for cheese and crackers as he “stared us down” from a nearby piling. 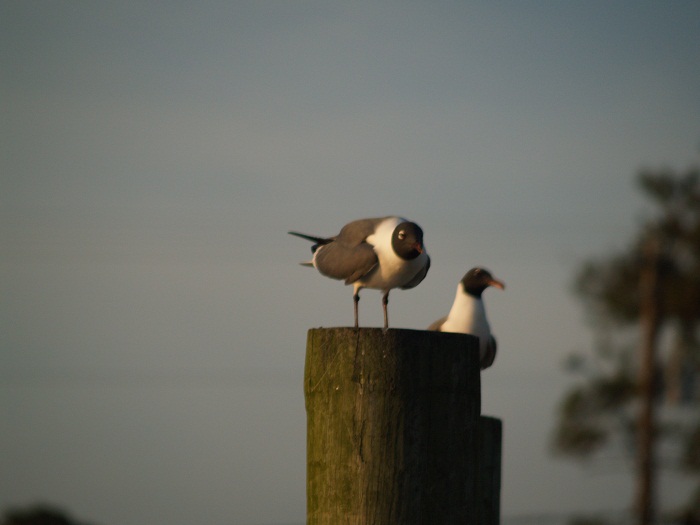 So, here we sit, aboard Pandora in lovely Oriental NC, a stones throw from New Bern, where we are headed tomorrow.  I have to say that we Brenda and I are getting a bit nostalgic knowing that we will soon be separating ourselves from our life aboard Pandora, something that has consumed much of our time for years.

It’s certainly bringing back many memories and I expect it’s not going to feel  great as we remove everything from her lockers and drive away a week from now.  Not terrific, in part, because we’ll soon be two-boat-owners.  I don’t know exactly how many miles Pandora has taken us over the last 8 years but it’s certainly been a great ride (if sometimes less smooth than Brenda would hope for) and we are going to miss her. Editor: I meant miss Pandora, not Brenda to be perfectly clear.

Well, today we will just have to work hard to make our last day aboard Pandora, here in Oriental, the best it can be.   Yes, that’s the spirit.

Enough of that, it’s time to make coffee.  Yes, that will make everything better. Well it will make it clearer, at least.  “Bob, NO it won’t… You drink decaf.”

One response to “Our last visit to Oriental on Pandora…”