Moving north. On our way…

It’s Saturday morning and today we sit.  After two days of moving north through the Keys, we are now anchored in a cut, colorfully called Angelfish Creek, at the northern tip of Key Largo.  It’s a beautiful spot with mangroves all around and excellent protection from the wind.

Yesterday we decided to come in here in spite of our fear that we might run aground as we entered from the ocean side.  To say that the entrance is tricky, doesn’t do it justice as the currents run very hard though this spot and as the current leaves the narrow confines of the swamp, where the depths are in the 15-20’ range, any sand carried by the swift current is deposited at the mouth as a sand bar so the water gets pretty skinny as things widen out.

The cruising guide suggested that there would be just about enough water to get into the channel if we entered the creek about one hour into the flood but not before.  If we were to do that, we were told to expect about 7 feet of water, a foot to spare given Pandora’s nearly 6’ drat.  However, as we were afraid of it getting dark before we got settled, we were forced to enter at slack low water.

To make matters worse, the channel was lined with markers driven into the sand that were barely further apart than about 50’.  This meant that were we to get stuck on a sandbar, that we would have precious little space to maneuver back into deeper water, if we could figure out where that was.  In the late afternoon light seeing the depth of the water is nearly impossible.

We also discussed bypassing this spot entirely and continuing north to a spot just south of Miami, where we would arrive between 9 and 10 PM.   That didn’t sound very appealing as it had been a long day and we hate making landfall in the dark.  So, we opted to head into Angelfish Creek, sand bar and all.

So, we entered the creek at dead slow and crept our way inside.  Unfortunately, the tide chart I was using didn’t appear to be correct as it was actually dead low instead of two hours into the flood that was predicted.  I suppose that we shouldn’t have been surprised as tides can vary a lot depending on wind direction.  Alas, all went well and while we ran aground while anchoring (again) we were all settled by the time the sun went down. 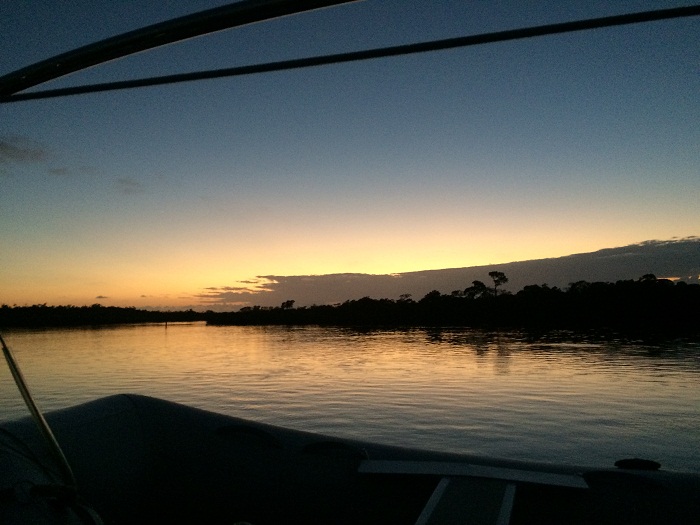 It was very nice to have a view of the mangroves and yet being far enough away so that the no-see-ums weren’t able to find us.

Speaking of no-see-ums, we left Marathon two days ago, and decided to head up on the inside to avoid the unfavorable winds on the ocean side.  We also wanted to see some of the sights on the Gulf side of the keys, which we had heard were very pretty.  It’s really shallow on the Gulf side and for the first day we only ran aground a few times.  Pretty shallow all the way.   At one point, we actually were leaving a mud trail behind us that stretched to the horizon as the bottom was soft mud and the keel disturbed it as we passed through water that was only about a foot or two beneath our keel.

Aside from one bad grounding and a few bumps, we did fine and anchored for the night in a lovely spot on the western side of Islamarada.  After a long day we decided to head out for dinner and jumped into our dink for the mile run down to the Islamarada Fish Company, which we had heard was pretty good.

Indeed, the spot looked terrific from the water with many tables under a huge thatched hut.  In the early evening light it looked enchanting. 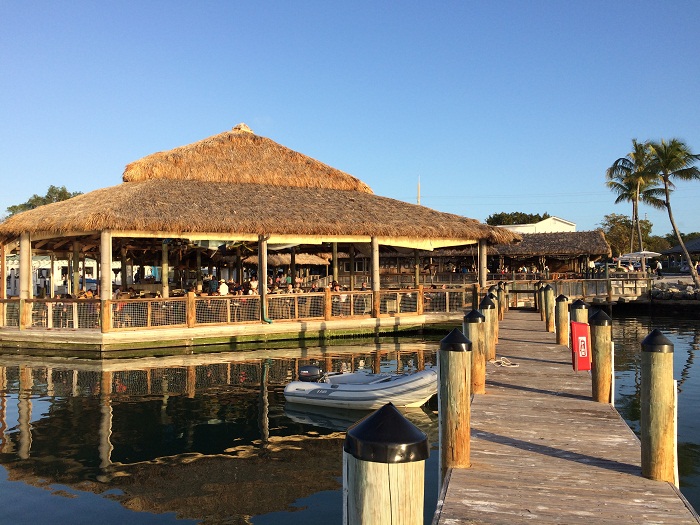 Brenda and I ordered margaritas which tasted great after a long day on the water.   We were amused to learn that the restaurant was owned and operated by a retail operation Bass Pro Shop, which had a huge store on the property.  I guess it makes sense to have a seafood joint and a tackle shop together.   Makes sense?   We decided to reserve judgment on that point for the moment.   The margaritas were good, right?

As the sun went down everyone had to make a stop on the dock to snap a photo or two.  The view was perfect. 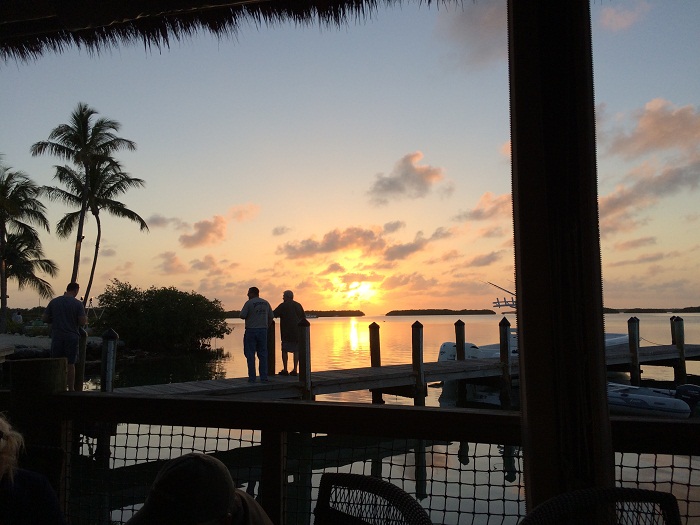 Bass Pro Shop knows how to make a lovely spot.   We both ordered ahi tuna rare, one of our favorite dishes.  Well, there is rare and there is “raw”.  And, the center wasn’t the only thing that was pink.  Oddly, they drizzled something pink and creamy on the top which looked more like a mostly melted strawberry slurpee.   It seems that Bass Pro Shop is better at making the moment than they are at cooking fish.  Oops.  Well, the evening was wonderful even if it was the most mediocre $100 dinner we had ever had.

They even had live music being performed in the glow of a dozen tiki lights.    So, a great spot if not great food.   Next time, a hamburger and fries. 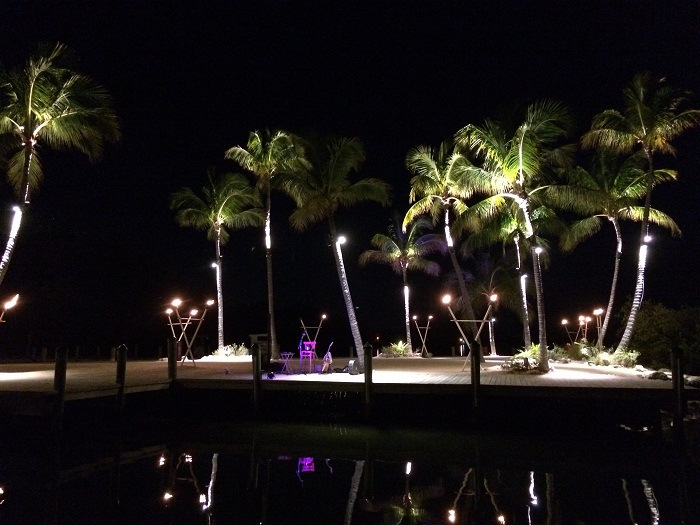 So, the next morning we upped the anchor and headed up toward the part of the trip that would be the most challenging with miles of shallow channels to get over.  We timed it to make the best of the 6” to 1’ of tide and off we went.  Well, we made it less than 100’ into the channel and bumped along the bottom.  Oops, better bag that idea.  Never mind.

So we turned around the headed back the 10 miles in the direction we had come the day before where there was a bridge we could go under to make it back to the Atlantic side of the Keys.   So, ten miles in the wrong direction and then back toward our destination.    Note to self:  When the chart says shallow, they mean it.  Don’t even try.

Anyway, our run here took about 10 hours and was over 60 miles, twenty of backtracking.  Alas, we got here and here we will stay for today while we wait for a favorable wind on Sunday.

So, our plan is to head offshore from here the 45 miles to Ft Lauderdale on Sunday and then to do short offshore runs from there to Ft Worth and on to Ft Pierce.   After that we expect to run inside up to northern FL with some stops in St Augustine and a few other cities that we really enjoy.

Our goal is to have Pandora in New Bern NC by mid April where she will be in the hands of the broker.

So, all is well aboard Pandora as we sit for a day waiting for favorable winds to carry us north.  It’s a beautiful spot and to be writing a post in the cockpit with this view from our stern is pretty nice. 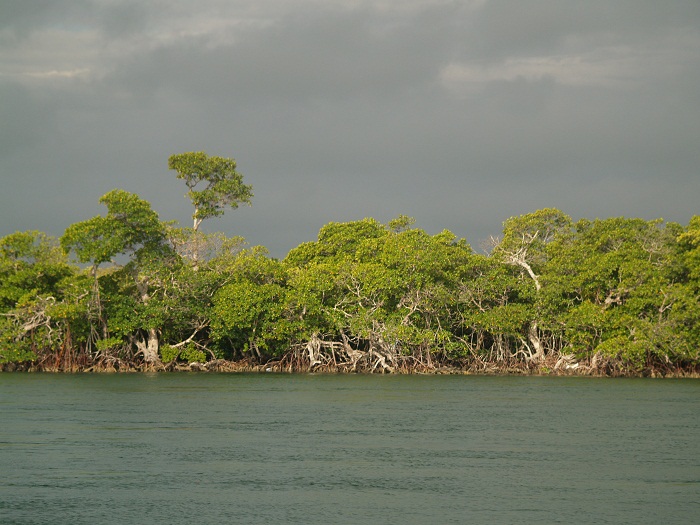 One response to “Moving north. On our way…”