Miami Beach: Been there, done that…

It’s Tuesday morning and we are thinking hard about leaving Miami after a week. We went to the Miami Boat Show a few times and have walked and walked, all over South Beach.  We’ve done plenty here, had a great time and are now looking forward to heading south to the Keys.

Even though we are in the heart of Miami, each sunrise is a treat.  Here’s the “sunrise of the day” for today. 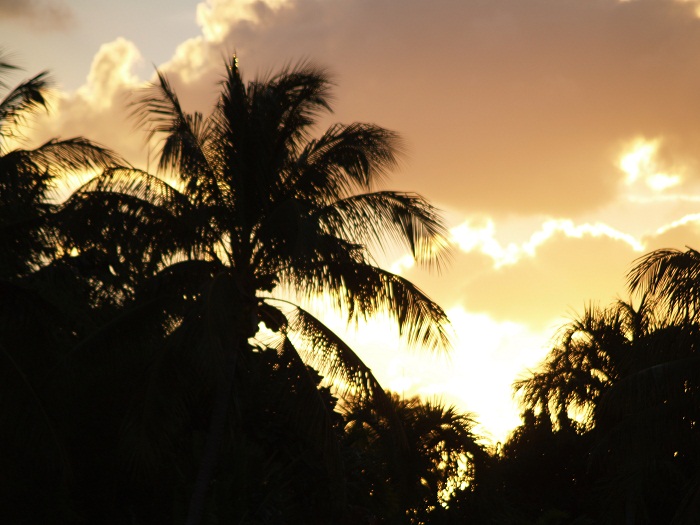 Actually, there are lots of nice spots here in Florida and as some prefer the views from land and some from on the water, there has been considerable debate over the last few years regarding anchoring rights in Florida waters.   Or, to put it another way, “I have paid millions for my home and I don’t want to look at your pathetic little boat anchored out in front of my home.”

Cruisers, like us, value the ability to put down the hook and spend time in an area without having to go into an expensive marina, where even a single night can cost upwards of $100 to $150 for a boat the size of Pandora.  And, it’s pretty clear that the towns and cities feel the same way as there is almost always good access and docks provided by the city for boaters to use to get ashore.

There are generally many spots available to anchor and cruisers value the ability to pick a spot, drop the hook and enjoy some shore time.   However, in some areas owners, particularly those who’s homes are valued in the many millions, are pretty sensitive about anyone marring their “multi-million dollar view”.

It isn’t surprising that folks that have that much money are used to getting their way and where you can and can’t anchor has become a very sensitive topic over the last few years.

Well, it seems that we have anchored, here in Sunset Lake, at what some might describe as“ground zero” in the ongoing debate on anchoring rights.  The current rules, well there aren’t many rules, is that we can anchor anywhere we want provided we don’t damage property.

However, as I mentioned in my last post, there are several property owners in this particular harbor that have decided to make their own rules.  I have already mentioned the guy that anchored 25 little boats in front of his home.   It seems that this guy has a friend that feels as strongly as he does about keeping the “riffraff “ out of his line of sight.

The other night we were anchored, as we are now, in the middle of the harbor and a boat from Canada came in and anchored between us and shore.  A short time later the home owner that was nearest the Canadian boat came out and started screaming obscenities that if he didn’t pick up his anchor and move that he would “sink your F*&^%$G boat”.  This went on for several minutes until the boat picked up anchor and moved away.

The fact is that it is legal for us to anchor here but there seems to be a few bad apple home owners that don’t want the law to stand in their way of making a scene.  It was very unfortunate to have a nice evening violated by screaming.   I guess if you are paying more than $80,000 a year in property taxes and that’s what it is, I looked it up, you feel like you own the world.

For the record, I called the police and reported what happened.   They were sympathetic, indicated that I wasn’t the first to call and promised to send out an officer to check in on the homeowner.

Anyway, it’s going to be interesting to see how things develop over the next few years and I am hopeful that anchoring rights won’t be eroded too much.

So, for now, we are enjoying time in this lovely little harbor, nasty neighbors or not.

It seems that other locals enjoy this spot too as there is a constant parade of boats cruising through to enjoy the sights.   This Trumpy came in yesterday, circled the harbor, and headed back out.  She was a real head turner.   Keeping something like this in good shape is a major commitment. 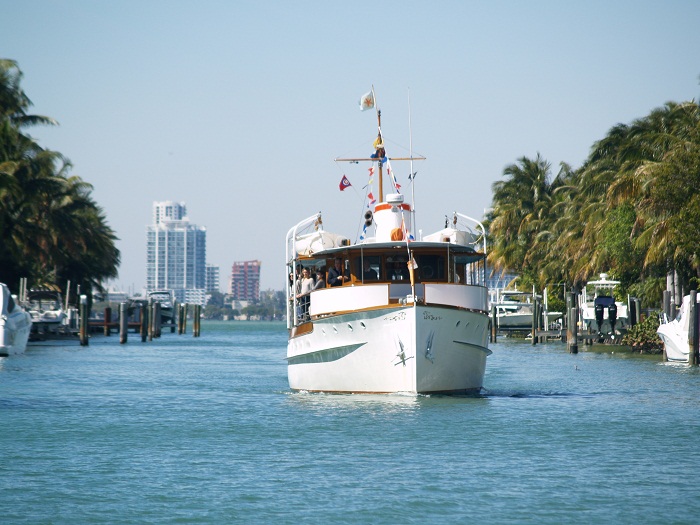 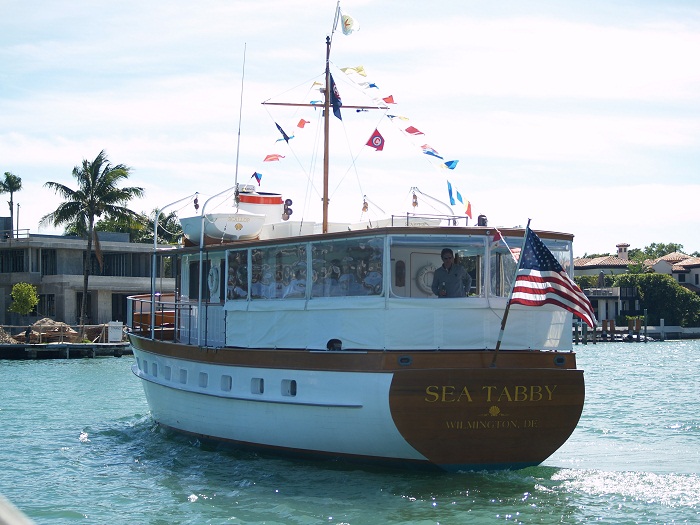 So, our plan is to leave here later today and head down to a little harbor appropriately named “no name harbor”, just south of Miami.  Then, on Wednesday we’ll make the two day run to Marathon, in the Keys, where we plan on spending a week or so.

Our son Rob has business in Miami next week and will be visiting us while he’s here, which will be fun.

It’s going to be very windy over the next week so hopefully we will have an easy run south.  The nasty weather that has been slamming the Northeast this winter translates into very windy conditions down here.  They say that when the northern states have tough winter it blows hard down here.   So far, that’s what’s happening.

Yes, we feel like we have “done Miami Beach” and are ready to move on and are looking forward to exploring the Keys.

One response to “Miami Beach: Been there, done that…”