Another day, another castle… and lunch on the beach

It’s Friday afternoon and we just got back from a day of exploring.  Our first stop of the day was a lovely medieval town nestled inside the walls of an impressive castle.   This one was, as they all are, perched on the top of a hill, but it seems that the owners of this one had to settle for a lot less vertical drop which must have made for a much easier life of it.  At least until some other group of tough guys came on the scene looking for a new place to live.   I guess that this particular town wasn’t pillaged to often as here we are today with a town that’s still intact and occupied.

The castle walls surrounding the town are quite impressive and I would guess that there are more than 100 tidy homes nestled within it’s walls.   I didn’t have the foresight to take a shot from the road as we approached.  You’ll just have to click here to see a description of it.  It seems that this place has been occupied since the Romans.  That’s a long time.  I’ll bet that there have been a slew of renovations since then. 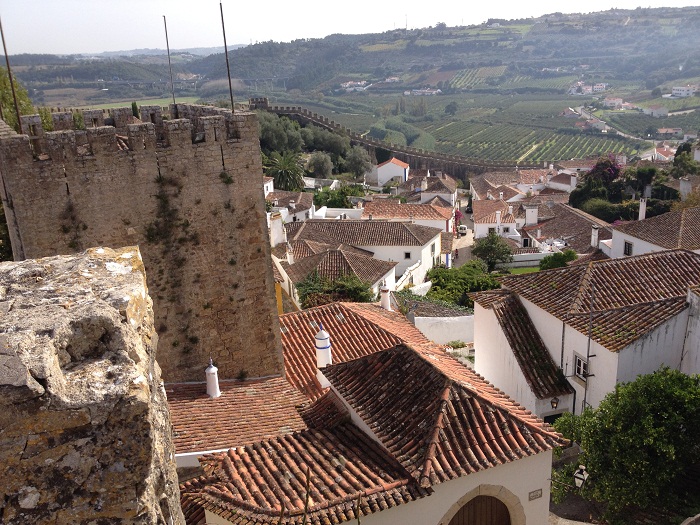 As you enter the walls of the city, you are greeted by, guess what?  Tiles.  What else.  We are in Portugal after all. 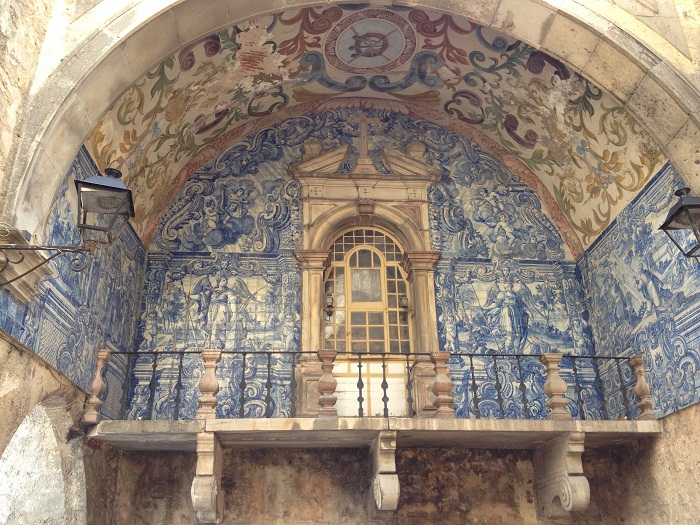 Everywhere you turn there is a beautiful view. 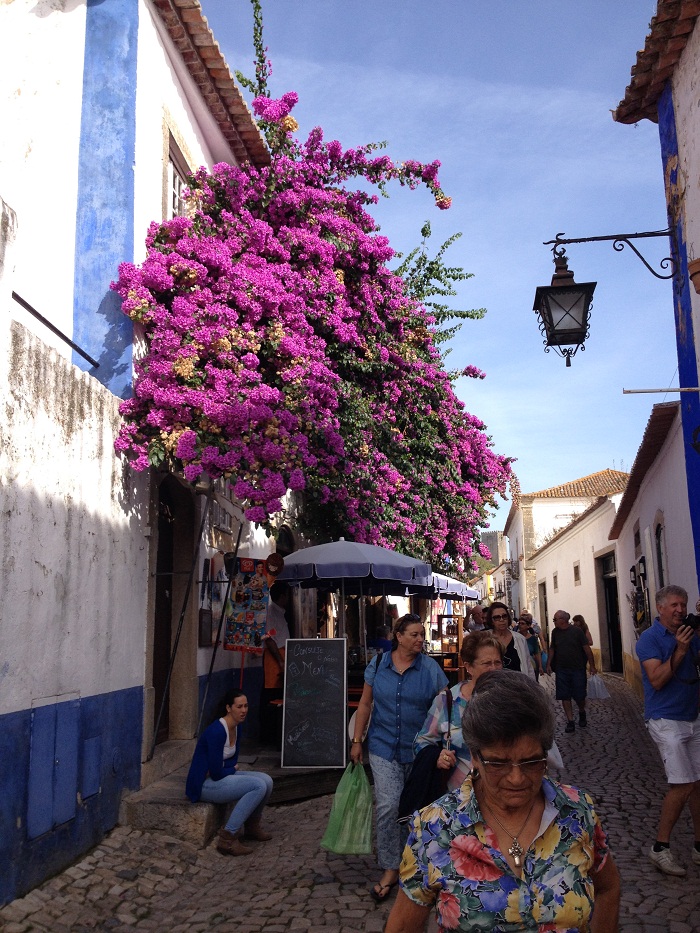 There were several churches within the castle walls. I’ll bet that the residents spent a lot of time praying that the next conqueror to take the village wouldn’t have “terrible” as part of his name. 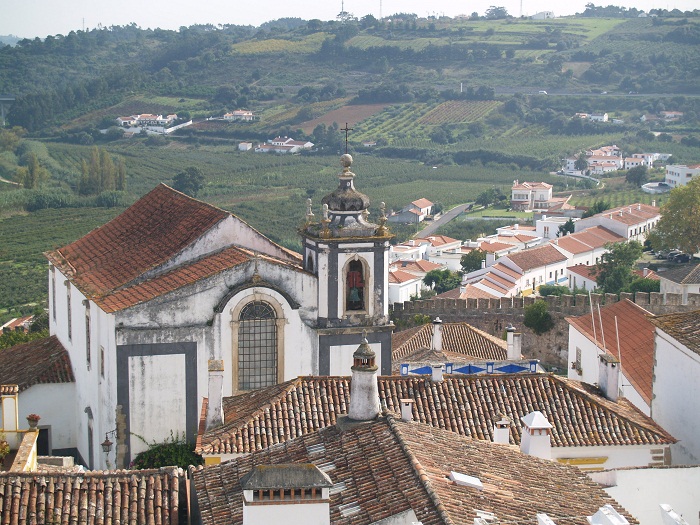 Along the way we came upon several kitties, obviously related, enjoying a nap on the top of a Renault.  Nice day for a nap, I’d say.  Brenda wanted to take them home. 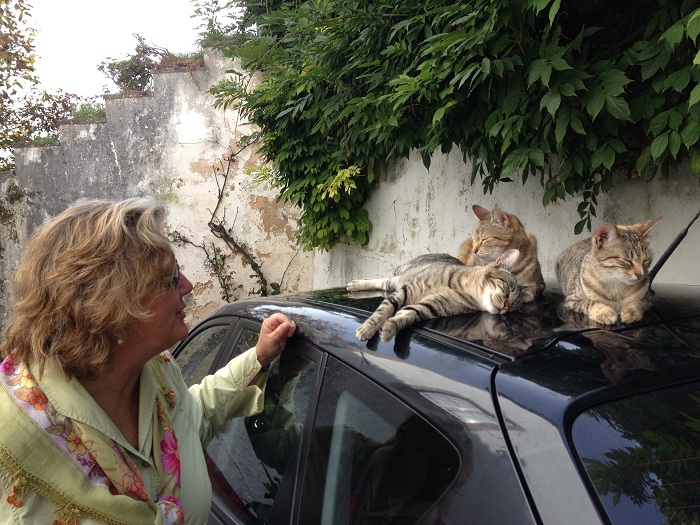 After that we drove up the coast to visit the seaside village of Peniche home of yet another fine fleet of fishing boats.  The coast is amazingly rough. 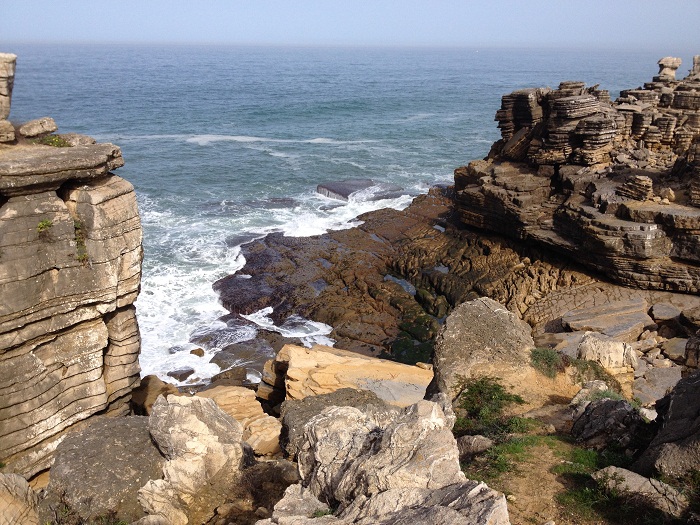 This video doesn’t do justice to how treacherous this stretch of coast is.  Notice ththe fishing boats in the distance as well as the fisherman.  Everywhere you look the scenery gets more and more dramatic. 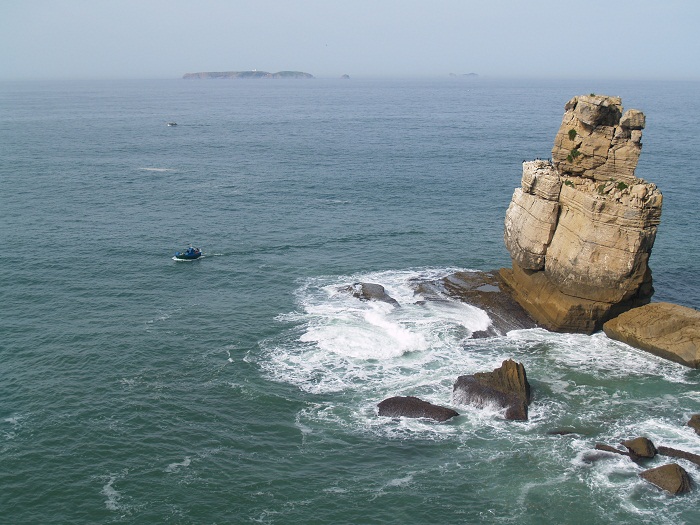 This sign makes the point.  And let me tell you, every so often a really big one can come up on you.   The graphics are well, “graphic”.   You get the point, words or not. 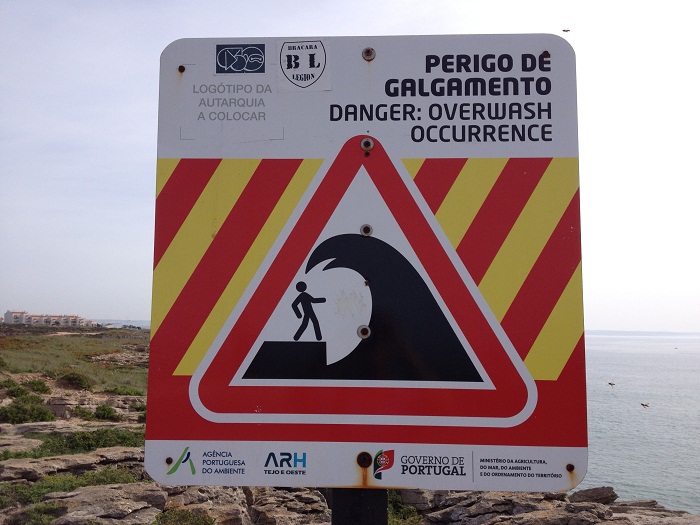 And nothing says “stay away” quite like a massive lighthouse perched on a huge rocky cliff. 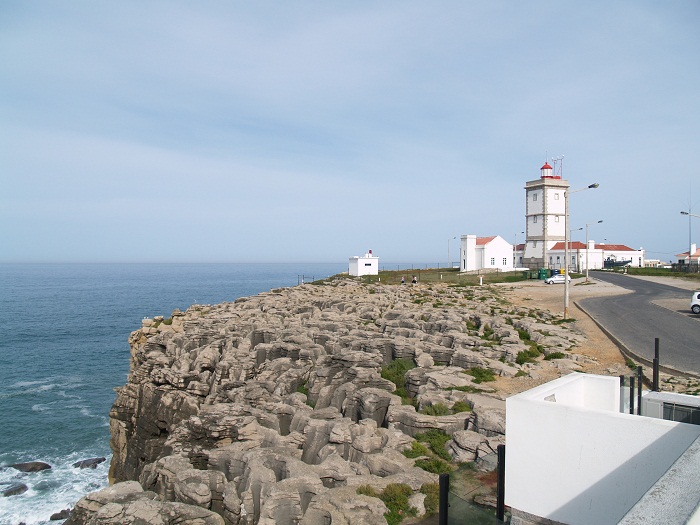 Just around the point is a harbor, one of very few for many miles up and down the coast.  The boats here are bigger than in other areas that we have visited. 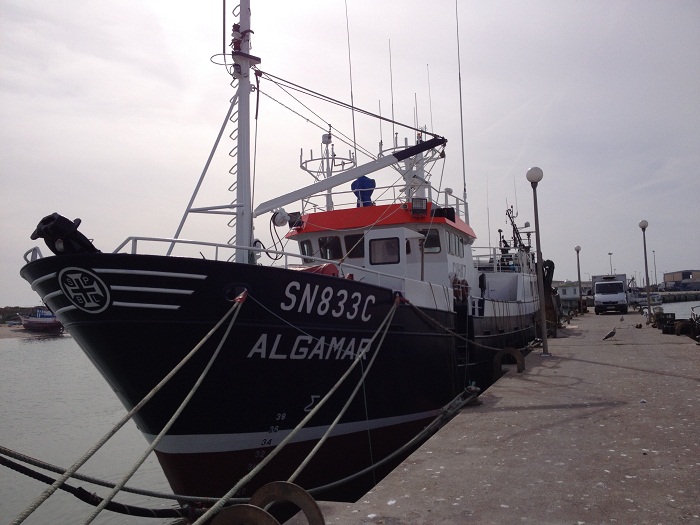 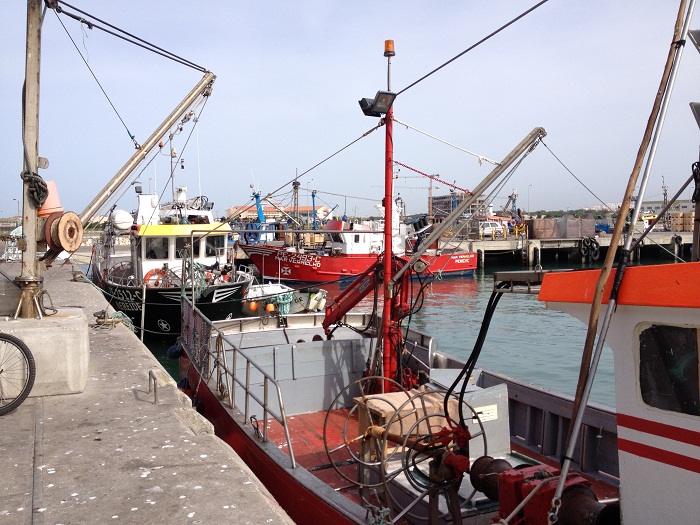 I went into a building where fisherman were selling their catch to a broker.  It didn’t look to me like they had caught much.   Quite a lot of fisherman and only a dozen or so boxes of catch. 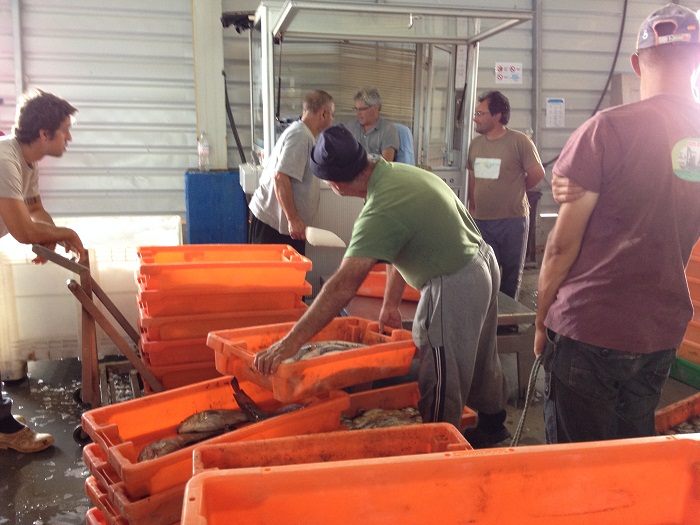 In town there was yet another castle and nestled just outside of it’s walls, a few locals were having a cookout on the beach complete with some nice red wine.  They didn’t ask us to join them.  However, as a group of young women peered over the edge…  Yes, they invited them to join them with much arm waving.  Alas, no takers. 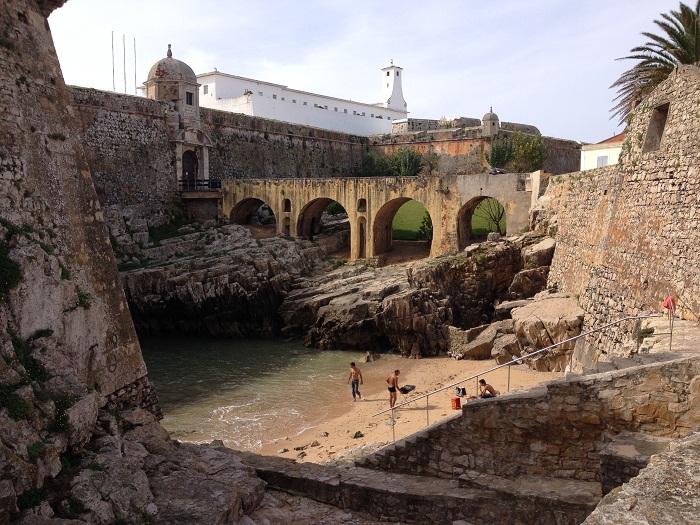 Everywhere there is even a tiny bit of protection from the surf, there will be fishing boats.  Launching through the surf is just part of a day.   And just on the other side of the cove you can see a beach.  We saw, lunch! 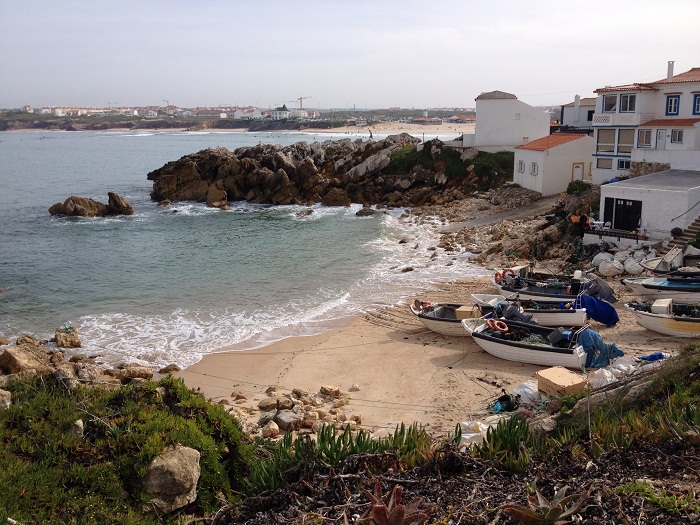 And after an exhausting few hours of touring of course, we had to have lunch, of course.  The view from our table.  Not so bad.  Food and wine?  Good too. The road on the beach is on a narrow spit of land connecting this tiny island with the main land.  I’ll bet that there are times when the road isn’t passable. 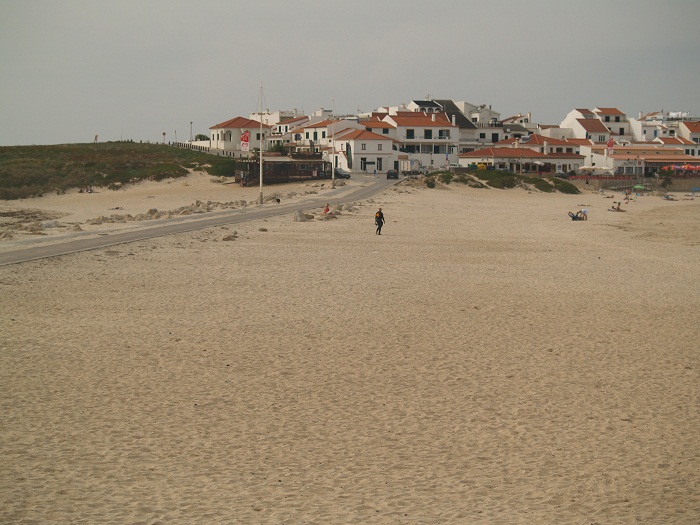 Well, as I finish this post it’s getting dark so I guess it’s time to eat again.  Yikes, we had better walk lots tomorrow to work all of this food off.  Did someone say food?