The Bahamas are magic, really!

It’s Tuesday and we are all the way down south in Georgetown, the largest “town” in the southern part of the Bahamas and a very popular harbor with cruisers.  At present I’d guess that there are perhaps 100 boats anchored here so, as you can imagine, there’s plenty going on.  While 100 boats may sound like a lot, it’s late in the season and many have already left.  A month ago I expect that there were three times that many boats hanging out but many have left to head north to the States or south to work their way down to the Caribbean.  Needless to say, with this many boats in one place for the winter, things are pretty organized.  Each morning there is a VHF radio net where local businesses announce their offerings and cruisers trade and sell spare items that they have on board.  It’s amazing how much extra stuff folks have on their boats that they don’t actually need.  I guess that boaters are packrats, just like land folks, but with less space.

Anyway, as you might recall from past posts, I damaged my main anchor some time ago when I got it lodged under a ledge up near Staniel Cay.  The shaft was bent 90 degrees so the anchor is “mort”.  As I like to have a spare of many items myself, I announced, on the morning radio net today, that I was looking for an anchor.  Well… It seems that some folks collect anchors and, for the right price, might be willing to part with one.  Within a few minutes I got calls from a number of boats offering their wares.  I’ll have to check them out and settle on one.  One caller told me that he has six anchors on his boat.  That’s a lot of anchors as most boats have only two or three at most.  I wonder how much other stuff he has on board.  Lots, I’ll bet.

On Sunday night Brenda and I anchored off of a lovely Cay (that’s pronounced Key in the Bahamas, Kay in the US), Musha Cay.  Interestingly, the island, and others nearby, are owned by David Copperfield, the magician.  I guess that being a magician pays well, and let me tell you, this is a VERY nice spot.  And, along with being a talented magician, our “neighbor” David has very nice taste.   Beautiful.

We understand that you can rent the island, Musha Cay for about $25,000 per day, and it would seem that plenty do as the place was hopping while we were there.  There are plenty of privately owned islands in the Bahamas, actually too many are private, but there are only a handful of spots that are as nice as this one.  The buildings are quite impressive.  Actually, i understand that this is the dining room area.   Check out the nearby dock.  No simple pressure treated pilings here.  They just won’t do For our David.  Check out the water color. 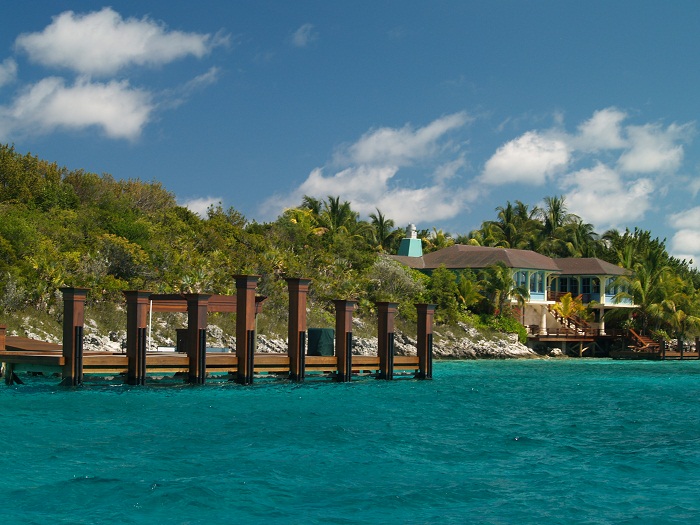 The place is spectacular and it seems that there is much more here than meets the eye, as you would expect from a magician.  Check out this article from Forbes magazine.  It’s worth reading.   Yes, quite a place And you can even get fireworks for $25,000.

As a particular point of interest, David Copperfield had a full size grand piano with a reclining mermaid commissioned out of stainless steel and then sunk it off of his island.  I was able to dive on it with some new friends we met who were from France And Belgium.  They took me in their dink, complete with a 40hp motor, off to visit the piano.  The currents were fierce and swimming down to the piano was a bit challenging.  I took some videos but can’t post them.   Here’s a photo I pulled off of the Web. 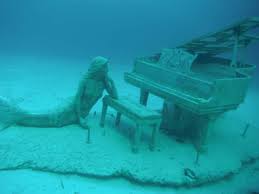 The “main” house is up on the hill and is quite a bit larger and has a commanding view of Exuma Sound.  This is a shot that I took from the ocean side as we headed down toward Georgetown yesterday.   I’ll bet that a G&T  or another “adult beverage” (of course included with the rental) would taste great on the deck in the evening.  I’d guess that sunrise isn’t too shabby either. 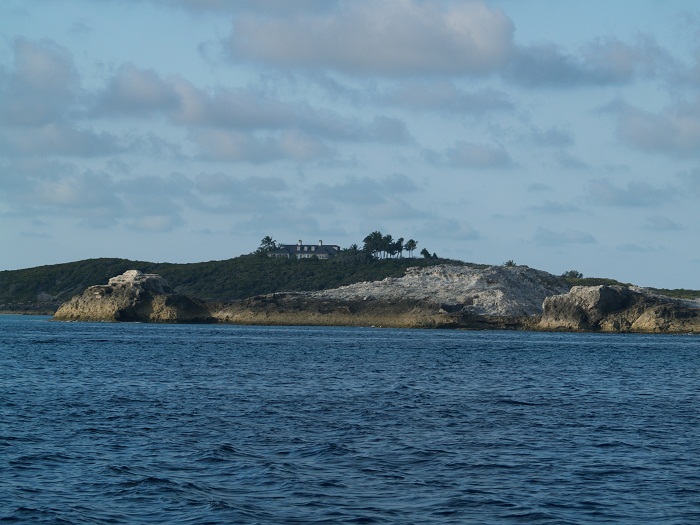 And, don’t forget, all materials to build anything on one of these remote islands have to be brought in to the Bahamas and then reshipped to the island by landing craft.  It’s a complicated process and plenty expensive.  Expensive? I can only imagine.

I guess that as JP Morgan once quipped, “if you have to ask, you can’t afford it”.  David Copperfield, it seems, doesn’t have to ask.  However, he does rent out the island.  Only, of course, if you can afford it.  Me, I am one of those who DO have to ask what things cost so I’ll never know.

What a spot.   As the sun rose on Monday morning I watched a crew of three get out on the beach and rake every inch by hand to remove any seaweed that had washed up on shore overnight.  Pretty amazing.   And, at night the docks have blue underwater LED lights that flash in a very nice way all night.  I would expect nothing less from our buddy David.  Of course.

So, on Monday morning at 08:00 we headed out to make the run to Georgetown, the largest town in the central Bahamas to re-provision and to get ready for our last month out prior to meeting up with our son Rob and his girlfriend Kandice back in Staniel Cay in late April.

Our plan was to make the 40 mile ocean run down to Georgetown on a settled day.  While we were only able to sail less than half of the way as the wind died, we did have a really nice run.  One thing that I did, which seemed very decadent, was to crank up the watermaker (a desalinator that takes the salt out of seawater) and use a hose to wash off nearly two months of salt that had accumulated on the decks.  Believe it or not, we have not had any rain of consequence for all that time.   Things had become very salty, that’s for sure.  So, with the watermaker cranking away, I washed the salt off of the decks and scrubbed away, all while motoring along in the ocean in conditions that were as calm as you can imagine.  By the time we reached Georgetown a few hours later the tanks were full again.

As a point of clarification, on the “bank” side of the islands, away from the ocean, the water is less than 20 feet deep for thousands of square miles, but on the ocean side, the water depth goes from about 40’  deep to, believe it or not, 3,500 feet deeP or more.  That’s an impressive depth and what a drop off in only a short distance from shore.  That’s some drop-off of 3,500 deep in less than a mile.

Also, as we motored calmly down the Exumas chain toward Georgetown, we decided to throw out a line to see what we could catch and while we didn’t get a fish that we could eat, we did catch a pretty large Barracuda.  These guys are pretty nasty looking with big teeth, about ¾” long.  Intimidating. 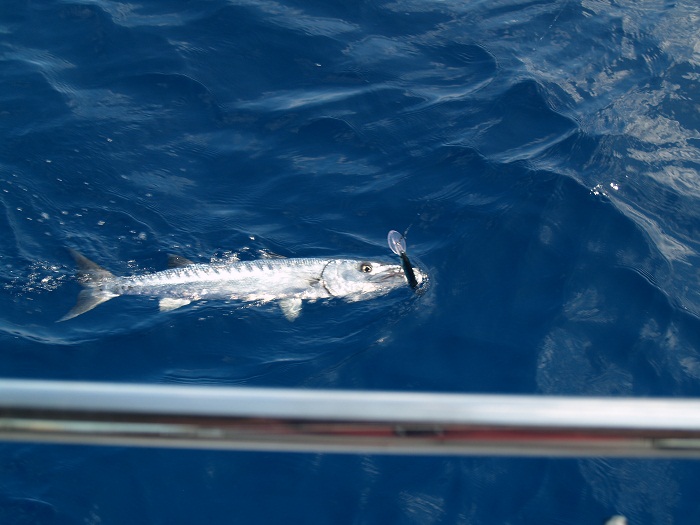 After some effort I was able to release him and still keep my lure, and my fingers…

All and all, a very nice day on the water, and even Brenda liked it.  Smooth and calm, her favorite.

Today, in Georgetown we did provisioning and  will be waiting for the next cold front to blow through.  Hopefully, we will be able to head out by the weekend or early next week.  Destination?  Perhaps the Jumentos.  Fortunately, we ran into a few of our friends who just got back from a month there.  Very remote and beautiful, we were told.

More to come on that, I would expect.   It seems to me that there is plenty of magi pic in the Bahamas, David Copperfield aside.