It’s Sunday morning and a lovely one at that.  Brenda got up early enough today to even see the sunrise.  How novel.  Usually it’s me taking photos of a sunrise so I can show them to her later.  Today she saw it herself.

I should note that Brenda loves sleep.  She says that sleep is her “natural state”. Perhaps it’s a girl thing.  If I were to sleep in too late I expect she would call EMS.

Forgive me.  I digress…

Yesterday afternoon I happened to remark to Brenda that it seemed to me that we had not done much socializing on Pandora with other couples this season when compared to last winter in the Bahamas.  Meeting up with like minded folks is one of the best parts of the cruising lifestyle and I was feeling a bit “under-exposed”.

Amazingly, less than ten minutes later a dink pulled up to Pandora and there was Jerry, the friend and crew member of yet another Jerry, a guy that we had met on our way south in the fall of 2012, in Oriental NC.

When we met “Oriental” Jerry over a year ago, he was planning to fly to the Canary Islands, off of Africa, to look at a boat that he was thinking of purchasing.  Well, Jerry ultimately did purchase that boat and he, along with the “other” or “new” Jerry, who had stopped by to say HI,  took delivery of his new boat, a catamaran, and sailed it to the Caribbean and recently up to the Bahamas.

So, last evening we found ourselves in the same harbor with Jerry who we haven’t seen for over a year.  What a small world it is.

When “friend” Jerry, as opposed to “Oriental NC” Jerry stopped by, we were comparing notes about a small boat that had sailed into the anchorage earlier in the afternoon and anchored, all without turning on their engine.   Most folks, including me and Brenda, pull our sails down before we get into a crowded anchorage.  No need to complicate things in a tight field, by our way of thinking.

So, to see a boat with two young people wind their way, under sail, through the other anchored boats and confidently drop their hook, was something we all noticed.  I expect that’s why they did it, actually.  A bit of hotdogging.  And done well, I should add.

It turns out that the “hotdoggers” were none other than a young couple we had spent time with in Rum Cay last winter.  Rainbow Connection, a Bayfield 35, is owned by Jamel and Tania who are probably in their early 30s. Tania was born (literally born, I think) aboard and grew up on a sailboat as her parents sailed here and there, I believe around the world at least once.   It seems that they are on their way to hook up with her parents who are still sailing around and are currently in Staniel Cay not far from here.

Here’s Tania working the foredeck and looking right at home. 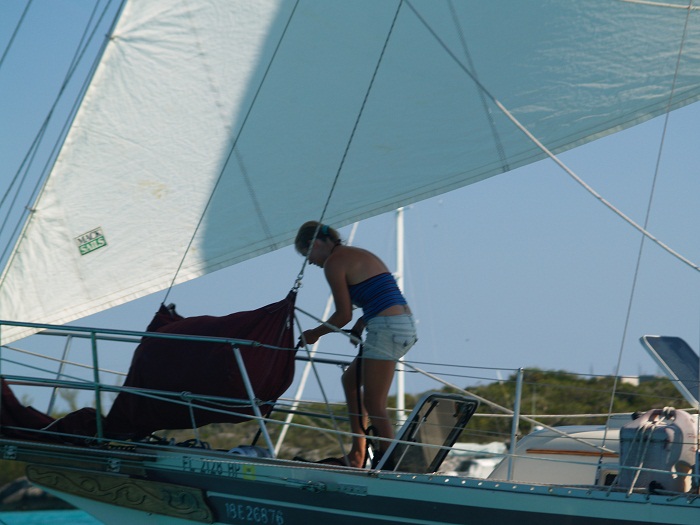 And Jamal at the helm. 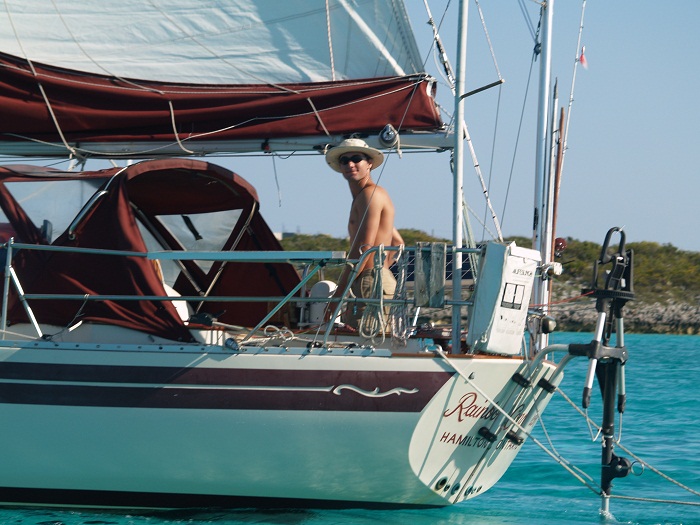 Looking very comfortable winding their way through the anchorage. 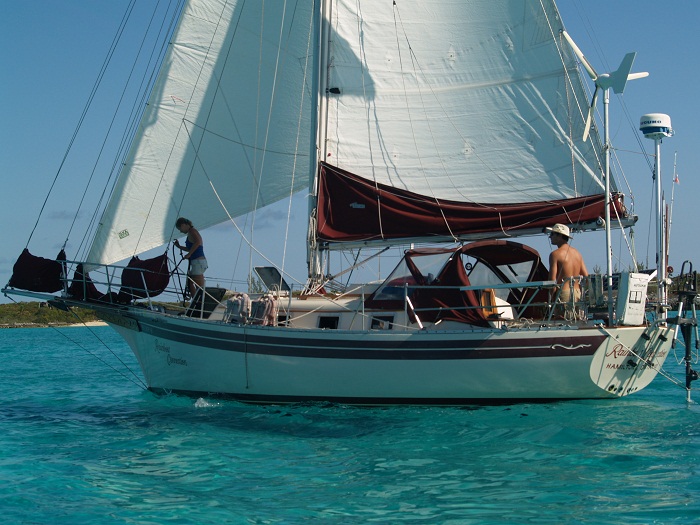 Jamal and Tania spend winters sailing aboard their boat and summers working on a commercial salmon fishing boat in Alaska.    Now, that’s not a combination that we see every day.  Most couples we meet are retired or are taking a year off from work. However, we almost never see young folks who have managed to find a way to cruise and work in a way that seems sustainable.   What these two have done is pretty neat.

I couldn’t resist and took the dink over to say HI and invite them to visit us for drinks.   We also had Jerry and Jerry visit too.  It was a lovely time.

And, as the sun set, Brenda did a terrific job of saluting the sunset by blowing the conch.  And that was particularly fitting as we had acquired that conch when we were in Rum Cay with Jamal and Tanya last winter.

I have written before about the “community” of cruisers and how they enter, leave and re-enter our lives, sometimes at the least expected moments.  I’d say that yesterday was about as perfect an example of how this works as we have encountered yet.

Today Jerry visited again to talk with us, over coffee, to offer tips about cruising in the Jumentos Cays, an area that we have wanted to visit but haven’t yet gone to.  It’s off the beaten path and not visited by many cruisers as it’s a bit tough to get to.  Perhaps we’ll visit now. 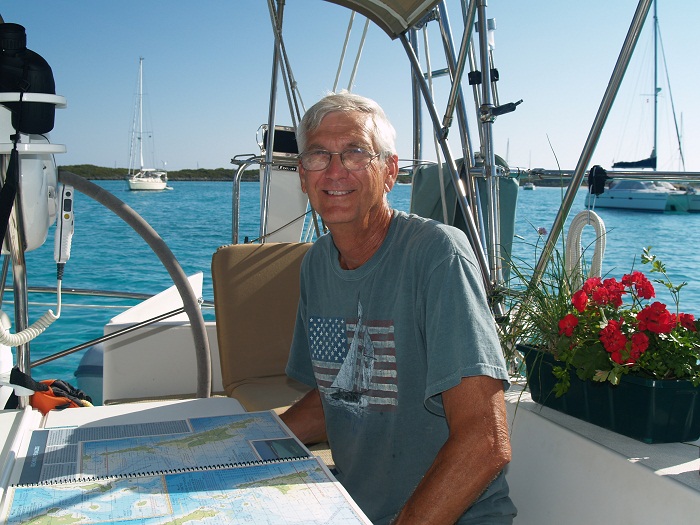 Whether, it’s  a few weeks or years later, folks we have met come and go from our lives, sometimes having crossed oceans or continents since we last toasted a sunset together.  And that’s one of the greatest pleasures of cruising for us.

One response to “Reconnecting aboard. It’s a small (cruising) world indeed.”