Memories of The Bounty and the beauty of Staniel Cay

It’s Thursday morning and we are still anchored off of Staniel Cay in the Exumas and are “enjoying” a fairly rare westerly wind.  Actually, to say that we are enjoying this is not actually accurate.  This area of the Bahamas is well protected from the prevailing easterlies but are very exposed to the west and when the wind shifts to the west, it gets pretty bumpy, which it is as I write this post.  Brenda doesn’t like bumpy.

As cold fronts run down the coast of the US, they bring with them “clocking winds” where the normal easterly trade winds give way to winds that clock from the normal east through to the SW, West, NW and then back to the east where they belong.    It’s quite amazing how quickly the seas build from the west as the winds clock.  Just yesterday we were enjoying very calm conditions and following a pretty strong squall last night, the wind has settled into the west and the seas are now causing all the boats in the anchorage to bump up and down.  Even though we are fairly well protected behind a small cay (island), there is still some “wrap around” waves making us a bit uncomfortable.   However, it could be worse.  There is a small boat near us that it really taking it on the chin as they buck up and down.   A while ago they were bucking enough to bury their bow in a particularly steep wave.  Better them than me, or Brenda.  She’d love that.  NOT!

Anyway, our plan for today is to jump out into the Exuma Sound and make a short run up north to a very nice area about 6 miles north of here, Cambridge Cay or Compass Cay, whichever seems more protected.  Happily, in this area there are a number of options to get out of the exposed waves when things come from the west.  As an added bonus, we will be meeting up with our friends Ann and Sandy, old buddies from Norwalk Yacht Club in CT.  Our days at Norwalk Yacht Club seem like another lifetime.  They will be joining us in a few days when other friends join them for a week run back to Ft Lauderdale.    It will be fun to catch up and talk about old times.

One of the nicest parts of the day here in the Bahamas is as we watch the sun set.  This time of day finds many cruisers sitting on the bows of their boats, adult beverage in hand watching the western sky turn all sorts of yellows, reds and blues as the sun sets.   Brenda and I really enjoy this time together.   It’s very serene.  A few days ago, when Christopher was with us, we enjoyed a particularly nice sunset. 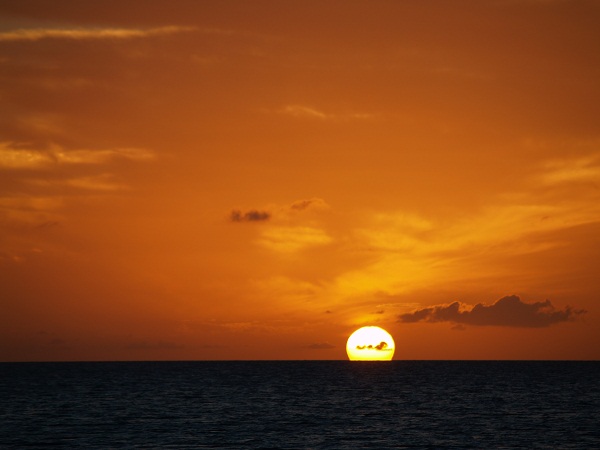 We even were treated to a “green flash”.  The green flash is when the last of the sun peaks below the horizon, if you stare at the last point of light it blinks a brilliant green.  I caught it on camera but it doesn’t look nearly as green it appears. 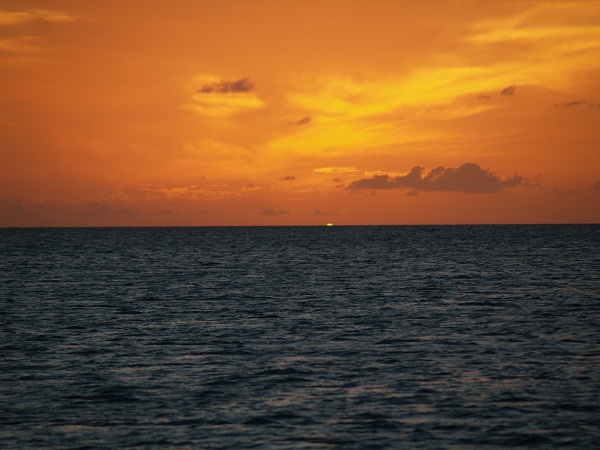 I guess it’s just another example of “you had to be there” and we were. Last evening was a bit more exciting than usual highlighted by a visit from a US Coastguard helicopter.  The distinctive orange and white craft approached our anchorage and proceeded to hover and slowly cruise in a lazy circle for about 45 minutes.  It’s very unusual to see the US Coastguard here in Bahamas waters and to see one so close to Pandora was a real treat.  To say they were close is an understatement.  They were so close that we could see one of the crew standing in the open door on the side of the aircraft.  They hovered so low that the down-wash from their rotors kicked up loads of salt spray.  They couldn’t have been more than a 150 yards from us and less than 200’ off of the water.  Brenda and I waved frantically to get their attention and if they saw us, they didn’t give any indication.  I was hoping that perhaps they would wiggle their rotors or something to say HI!  Oh well. 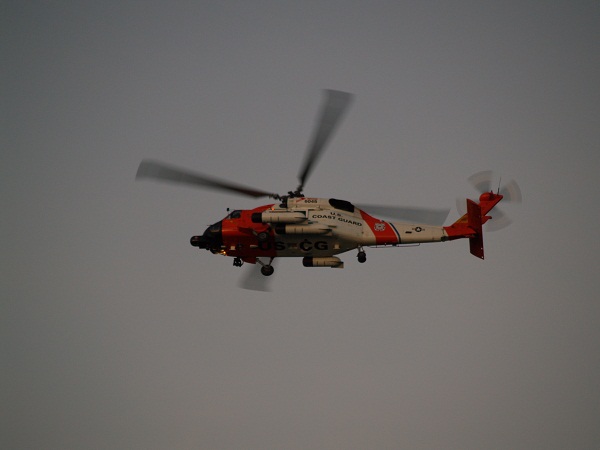 The light was fading but we were still able to get a great shot of them passing by.

Interestingly, this wasn’t the only helicopter sighting yesterday with this guy circling over Staniel Cay for over an hour.  The sighting was pretty neat but not nearly as impressive a sight as the USCG helicopter but very interesting never-the-less. 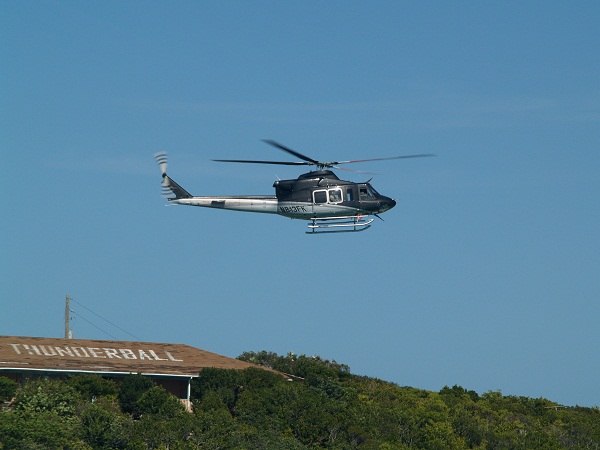 Staniel Cay is one of the more popular islands in the Exumas and has been the location for the filming of a number of movies over the years.  Perhaps the most famous is the James Bond movie “Thunderball”, that was filmed here way back in the mid 60s.   A particularly memorable scene was filmed in an underwater cave, or grotto, nearby.  This site is still a very popular snorkeling spot.  Actually, we are anchored just east of what is now known as “Thunderball grotto”.  It’s pretty neat.  At low tide you can swim into the grotto and there, lit by sun streaming in from a hole above, is an amazing cave full of colorful fish.

Another really interesting feature here and elsewhere in the Bahamas is an occasional breadfruit tree.  These stately trees are prized for their starchy fruit.  This particular breadfruit tree is a descendant of those brought to the new world by Captain Blye himself aboard the HMS Bounty.  Blye was made famous by the mutiny aboard his ship.  That story itself has been made into many movies over the years.

In spite of the trials of Blye and his shipmates, descendants of the breadfruit tree seedlings he was carrying from the Pacific islands made their way to the Bahamas.    Here is a photo of one of the larger breadfruit trees on Staniel. 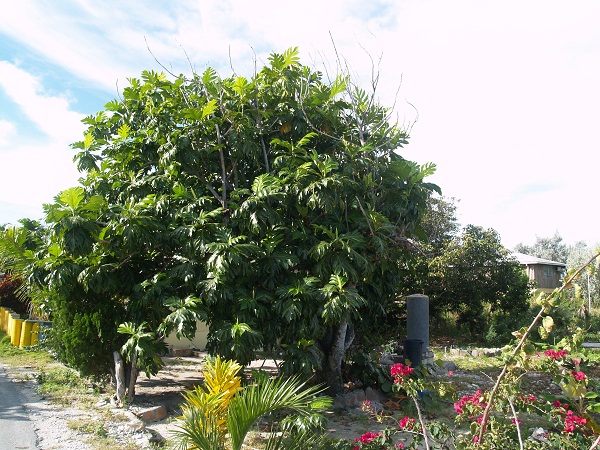 This is a shot of a not quite mature breadfruit.  I understand that the fruit tastes a bit like a potato when cooked.  The Breadfruit was envisioned as an inexpensive source of food for the slave population in the Caribbean.    I don’t know if Breadfruit is eaten by the Bahamians these days. 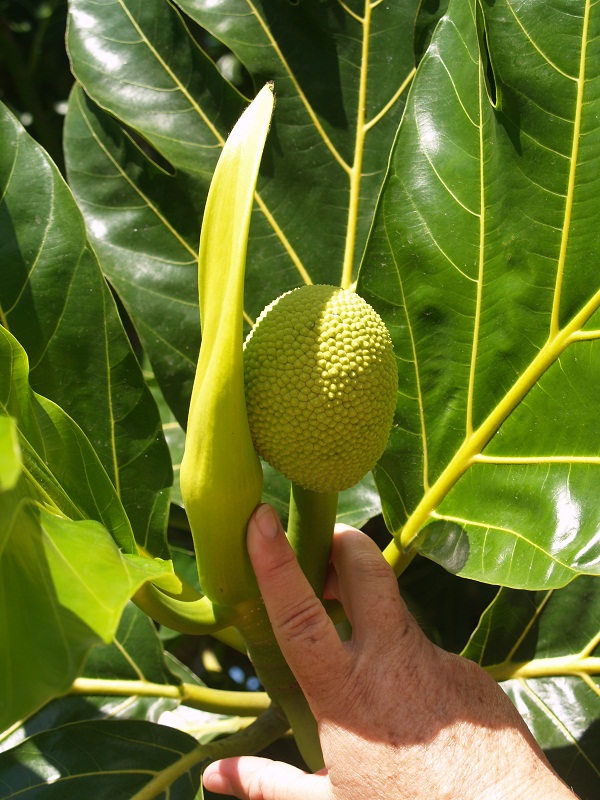 There aren’t many buildings of note on these islands but the local church, most often Baptist, generally are well supported by the locals.  With only about 50 full time residents living on Staniel, clearly a lot of attention is paid to keeping the building in perfect condition.  This church on Staniel is one of the nicer we have seen. 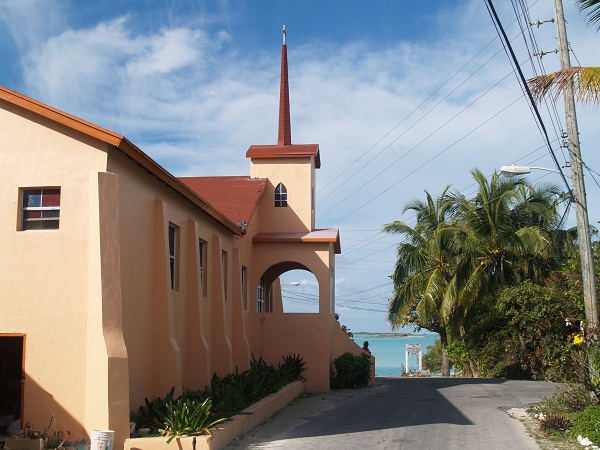 Yesterday I went for a walk on the eastern side of Staniel on one of the many beautiful beaches.  This beach was about a mile long and I had it all to myself.   I was very impressed with the sandstone outcroppings that ran to the sea. 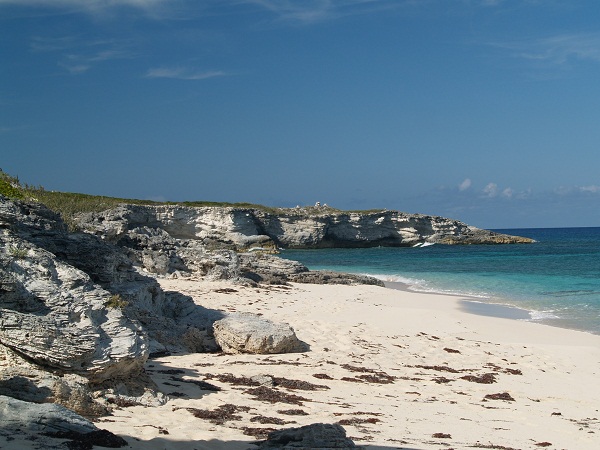 Over the centuries the Bahamas Banks were alternately flooded and exposed as subsequent ice ages tied up large amounts of water in glaciers up in the higher latitudes.  As the banks here were exposed to the wind, huge sand dunes were built up.   As rain fell, minerals in the sand leached down through the sand and hardened the dunes into sandstone.   As the glaciers receded and the sea levels rose, the ocean carved the stone into fanciful shapes.  Here’s a good examplesof the evolving landscape.  It’s pretty dramatic. 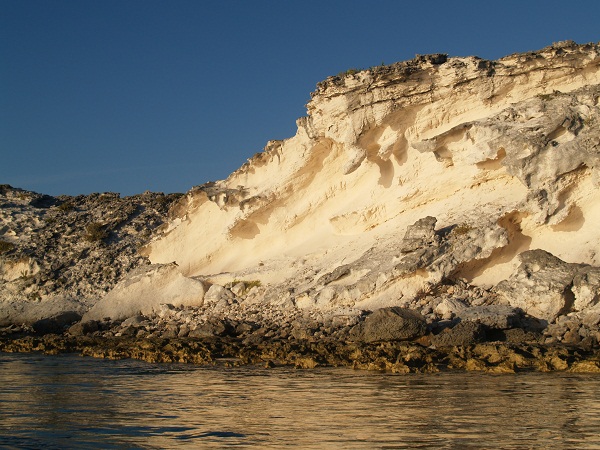 As I finish this post the westerly winds are subsiding a bit so I expect we will head north a short distance as planned.  Happily, it’s another sunny and beautiful day here in paradise.  It sure beats snow, in my book.

It’s been nice visiting Staniel and it’s not hard to understand how this spot has been popular for so many years.