Sailing again at last. On to Nassau.

It’s Monday mid morning and we are sailing along with a gentle breeze on our way to Nassau from Chub Cay, a distance of about 50 miles.  Actually, the engine has gotten a good workout since our arrival back in Florida and today is the first time that the sails have been out since my arrival in Florida way back in November.

Since arriving in the Bahamas a few days ago we have hung out in Chub Cay, about 40 miles NW of Nassau.  We decided to stay put for a few days to wait for a weather window to make the run and stop in Nassau, along the way, in part because our son Christopher will be joining us there for a ten day visit.

Christoper is currently in Thailand decompressing from his graduate studies at Columbia.   It seems that he spent, by his count, something like 500 weeks on physics and is now ready for a change.  Yeah, no kidding.  So, how about heading to Thailand from New York City for a change of scenery?  Yep, that’s a change.

Anyway, he’s still not quite ready to re-enter the real world so is flying from Bangkok to JFK in NY and then on to Nassau where he will hook up with us.  That’s three non stop days of traveling so it will be interesting to see just how cranky and pooped he is when he arrives.  After he arrives on Thursday, we plan on making a run to Allen Cay at the northern end of the Exuma chain, home of ancient iguanas, the only indigenous population in the Bahamas.  This island was one of our first landfalls in the Bahamas last year so it will be fun to go back.  I have been using this photo as my Facebook photo since last year. 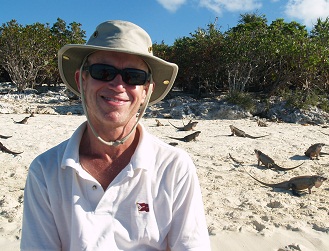 These critters are pretty fierce looking but they are quick to run away if you approach them.   They love to get handouts from visitors.  So much for wild but I wouldn’t want to try and pet one.

The closer you get, the fiercer they look. 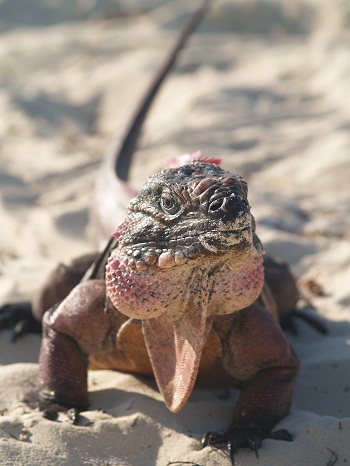 I’ll bet that Christopher will love to see these guys. Yesterday we moved from one harbor on Chub to another and visited a little marina on the eastern shore.  It’s run by a Bahamian named Howard.  It’s clear that he works hard at keeping the modest place up and I have to think that running a business like that must be pretty challenging.  The place is simple but well kept.  I would have a tough time being in such an out of the way spot year round.   Like so many building in the islands, it’s brightly painted. 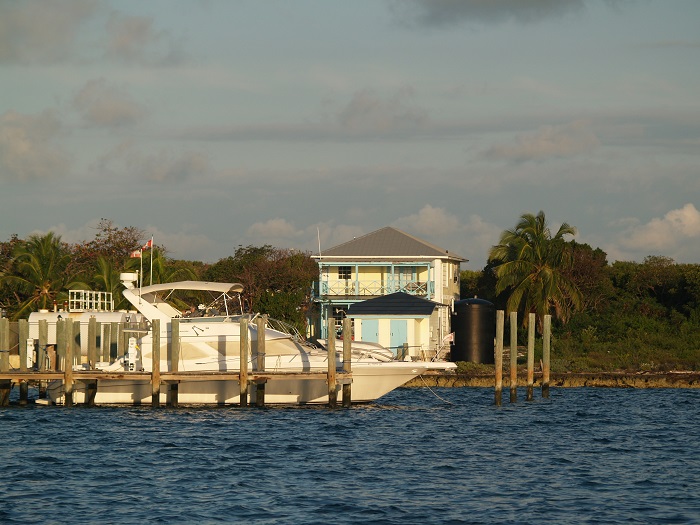 We dropped by for a drink at the bar and took a mooring for the night.  We were the only folks in the bar and only one of three boats visiting.  We generally don’t take moorings as we prefer to use our own anchor.  However, the bottom there is pretty grassy and my Bruce anchor hook well into weed.  I haven’t run into much of a problem in the Bahamas south of Nassau but the northern areas are pretty weedy.  Perhaps it’s time for a different anchor.

In the early evening a small skiff with some locals came by and began diving just off of his dock.  They had hand spears and kept swimming down, time after time.  After a few tries they came up with a good size lobster and then another.  Howard told me that some years ago a few pieces of machinery had been sunk off of the dock to provide hiding places for fish and lobsters.  These artificial “reefs” were actually an old pickup truck and a few pieces of heavy equipment.  Great idea as any sort of obstruction attracts plenty of sea-life.

Had we stayed for another day I would have had to try my hand at spearing a lobster.

Speaking of diving, yesterday I dragged out my “hooka” compressor, an electric air compressor and long hose that allows me to stay underwater as long as needed.  I hook this unit up to my portable generator  for power.   By having this unit and long air hose, I can dive under the water to clean the bottom, something that has to be done periodically.  The process took me about an hour as it hadn’t been done since leaving Essex CT back in October.

The water here is so clear that you can see at least 100’ so it’s easy to see any “wildlife” that comes near.  Generally you don’t see much but yesterday there were two large 8’ long sharks that kept cruising by.  This is a not-so-great shot of one that kept coming very close to the boat.  Trust me when I say that he was really close, and BIG!  I am pretty sure that they weren’t the harmless nurse sharks. 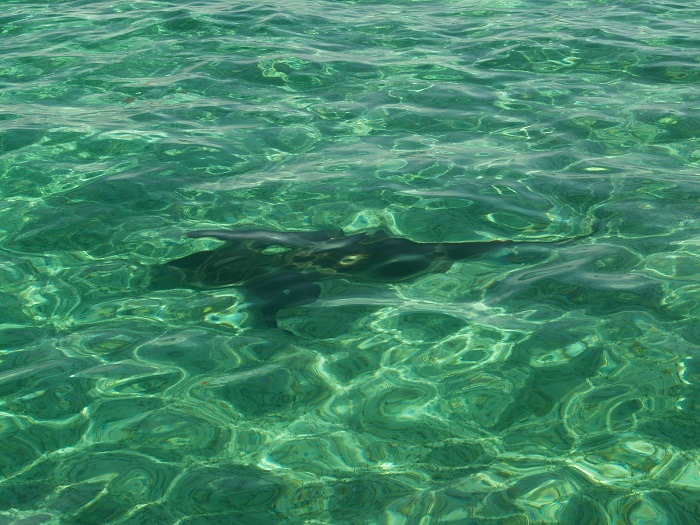 i say this becaues,  at one point, he/she came up to the surface and opened his mouth, I guess to take a gulp of air.  I saw lots of teeth, something that nurse sharks don’t have.  Anyway, I decided it would be prudent to wait a while before getting in the water to clean the hull.  After a while they wondered off so I decided to go in.  However, I did ask Brenda to stand watch and to tap on the deck if she saw anyone coming toward us.  Just in case, of course.

Alas, I was able to get the hull cleaned with no loss of fingers or worse.   However, I was still surrounded by plenty of observers.   A barracuda, perhaps 3’ long kept an eye on me the whole time, albeit from a discrete distance.  A 2’ remora, those fish with a sucker on the top of their heads, kept me company the entire time and he was never more than two to three feet away.  Pretty neat, actually.  A small ray with a larger fish tagging along kept cruising nearby and a very small and colorful puffer fish was also hanging around the entire time.

Happily, no sharks.  However, I must have stopped scrubbing at least 100 times to do a 360 scan to be sure that there wasn’t anyone thinking of making a snack of me.

After I finished I spied this beauty passing by to head into the marina.  We were too cheap to spring for the marina and anchored outside.  I expect that the owner of this yacht isn’t cleaning the bottom himself.  Actually, they had a “scout” boat heading in front of them to chart the depth to be sure that they wouldn’t run aground. Well, I am not totally cheap as Brenda and I did go into the marina to have lunch one day.  It was pretty good. 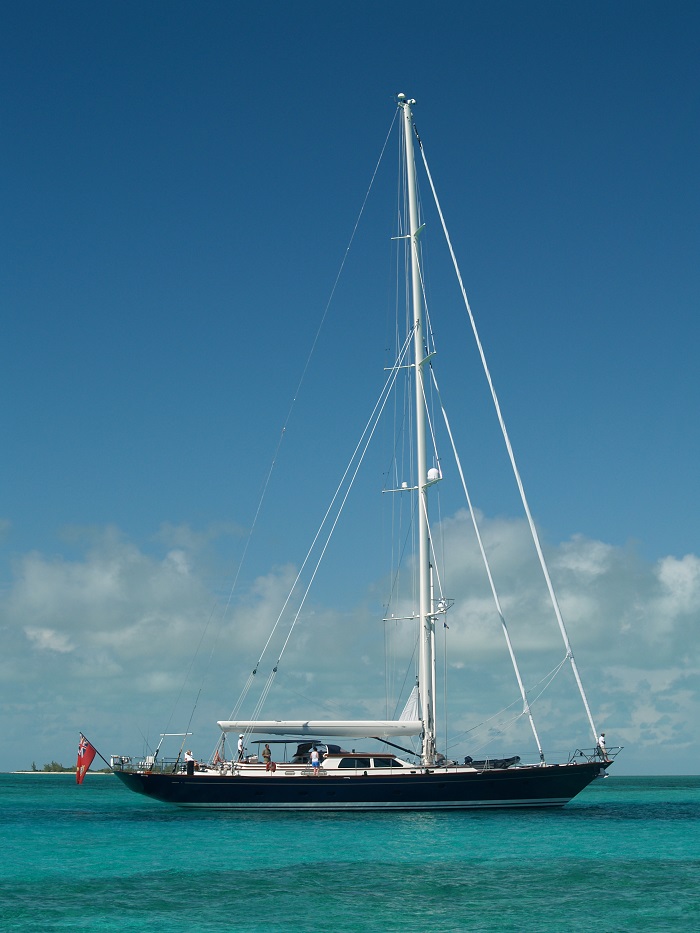 While we were ashore enjoying lunch, I took this photo of Pandora anchored off of the resort beach.  What a beautiful spot.  We’ll have to come back next year.  Perhaps we will spring for a visit to the marina too. 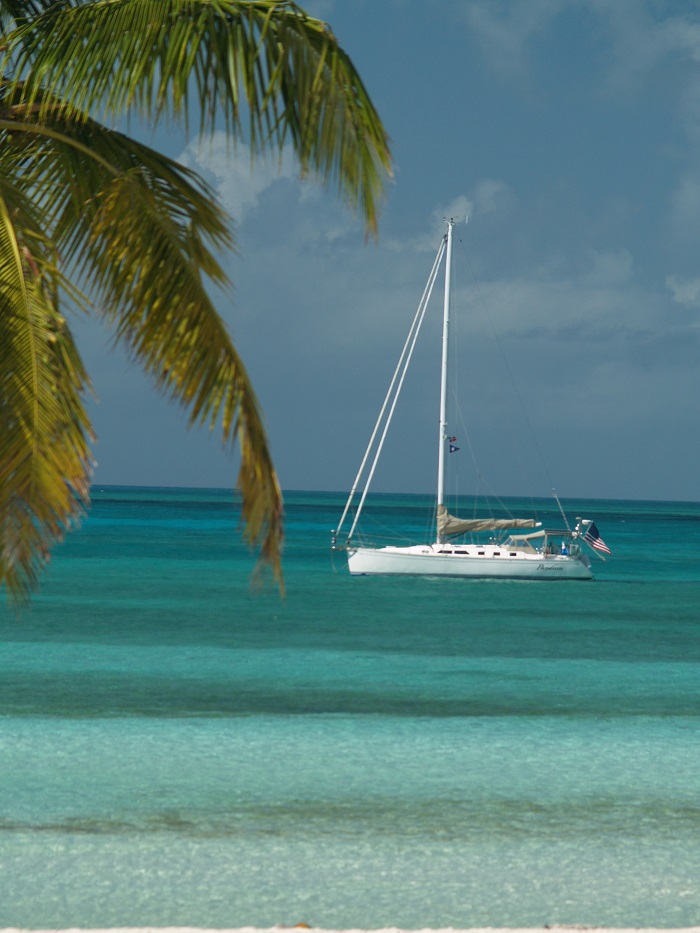 So, here we are today making our run to Nassau where we will hang out for a few days.  Interestingly, the chef at Essex Yacht Club, Michael, has a son in the Marines, Brent, and he happens to be stationed in Nassau at the American Embassy.  We hope to connect with him while we are there.  Fingers crossed.

Our plan in Nassau will be to spend a few days till Christopher arrives.  We will rent a car to tour the island.  Meeting Christoper at the airport as he exits the terminal is also high on our list.  Nassau isn’t really that great a place to visit compared with everywhere else in the Bahamas but we are very much looking forward to a few days there.  Besides, one of the best groceries in the Bahamas is there so that’s good too.

For now, I think I’ll go back up into the cockpit to watch the water go by.  Oh yeah, the water here is really deep, over 7,000 feet actually.  And the color, the most perfect color of indigo blue.   Indigo water with the sun sparkling and an easy breeze.  Perfect. 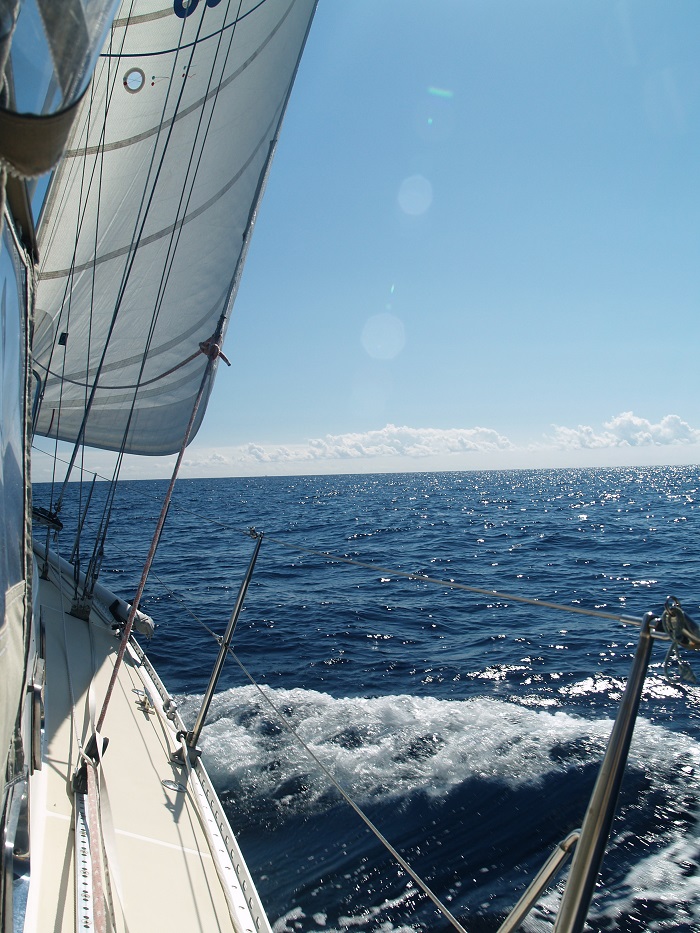 Yes, indeed, it’s good to be under sail again.