Here’s another way to interest Brenda in sailing, uh…boating. I think.

My family often jokes that my life for the last 35+ years with Brenda has been a series of desperate moves designed to help her enjoy her time aboard as much as I do.

So, do I think that this is a fair assessment?  Yes indeed, I have done pretty well except for the times, which might possibly have been too frequent, when she hasn’t enjoyed it.  It’s those not so fun times that our oldest son Rob refers to as “career limiting  moves” (CLMs).

Examples of CLMs include.. a day spent thrashing to windward.  CLM.  Nights spent at anchor with no wind and temperatures in the high 80s or worse.  CLM. Day after day of rain and nothing to do.  Well, you get the picture.

The good news is that after so many years of cruising with me, Brenda continues to spend months every year aboard.  That’s very good.  I guess that means that the good times outweigh the CLMs.  Good.  So, with that in mind, what am I planning as my next set of “desperate moves”?

Yes, that’s the burning question for me as we prepare to return to Florida and Pandora in a few week for our second visit to the Bahamas.  I do find self thinking “what next?”.    Will we go for a third season in the Bahamas next winter or branch out for something new?

We do enjoy the Bahamas very much.  What’s not to like about warm temperatures and chrystal clear water?  Yes, it’s pretty nice.

However, I know that Brenda really wants to visit places that have great architecture, art and restaurants.  The Bahamas have some of that but that’s not what they are known for.

Here’s an idea… Brenda majored in the classics.  Latin and Greek.  So, where can we go with Pandora where there’s lots of that sort of thing.  Yes, you guessed it. Europe, across the “Pond”.

Also, she I know that enjoys river cruising and our trip down the ICW last year was very enjoyable.   So, recently I mentioned the idea of taking Pandora on a canal tour from the English Channel all the way to the Med.  She loved the idea.  How cool is that?

So, I decided to do some preliminary research.  I found that there are some 5,000 miles of canals in France, most of which are deep enough to float Pandora, and the operative word is “most”.  This map shows just how extensive they are.  The dark blue colored canals are plenty deep to float Pandora, the lighter blue ones, just barely, I think.  I have contacted an expert on the subject and he seems to think that we can plow our way through the shallow parts and not get stuck.

This map shows just how extensive the network is.  Pretty amazing. 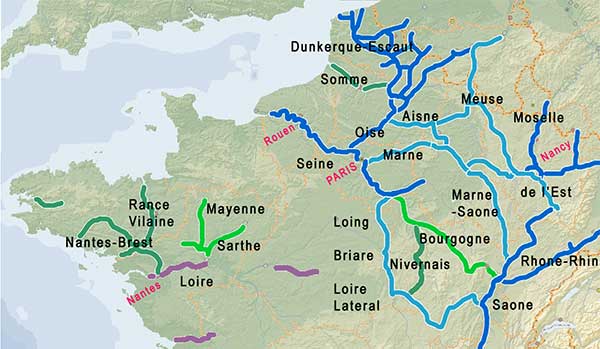 I am told that the part of the trip that is in central France will be the most challenging for our draft.  I guess we’d enter in Rouen and exit in Petit Rhone.  For now, I am keeping my fingers crossed regarding the “skinny water” in central France.  Besides, I don’t want to go fast anyway.  Too much to see along the way.

The site, www.french-waterways.com is a great source of information on the canals and the moderator/editor, Grehan, has been very responsive to my questions.  It is his opinion that with my 1.8m draft I should be able to push my way through the low spots and do fine everywhere else.  I guess I will need more information on that score but it’s an encouraging start.

I found this interesting video on the site.  It’s a first hand overview of what it’s like to go through a lock in France.  It’s amazing just how narrow the locks are.  Many of the locks are only 14′ wide and Pandora,with her 12′ beam will fit with about one foot on each side.  I tried to find other videos that showed the countryside but didn’t find quite what I was looking for.  I’ll continue to explore to find some worth sharing.  For now…Brenda finds it amusing and sometimes alarming that when I get an idea into my head…I do it.  When the boys were young, they had all sorts of ideas and plans of things that they were going to do and Brenda’s approach was to just smile, nod and wait for them to forget and move onto something else.

Oops, that doesn’t seem to work with me.  Yes, my ideas evolve, often a lot.   However, when I get an idea in my head, more often than not, we end up doing it.  Yikes…

She says that I remind her of a ferret that we once had as a pet years ago named Ricki.  Well, when Ricki got something in his mind (and it was a small mind), it was impossible to change his direction.  You could pick him up and turn him around time after time and the same thing would happen…he’d just turn around and head to the same place, again, again and again.

I guess that’s why Pandora is named Pandora.  Brenda was very clear that when we acquired a boat that could cross oceans.  Well… I’d want to cross oceans.

So, now it’s up to me to come up with cruising ideas that include places that Brenda finds compelling.  Canal cruising in France?  Pretty compelling to a girl that loves the classics.  And, I am counting on that.

That’s all for now.   I guess I have more research to do.  Wish me luck.

6 responses to “Here’s another way to interest Brenda in sailing, uh…boating. I think.”