Eight years. An era comes to a close and renews again.

On Sunday morning December 29th my father, Bob Sr. passed away.  He had been sick for nearly a year but did quite well and was able to continue with a fairly normal life in spite of developing leukemia.    Happily, he was able to be active up until a few weeks before the end and for that I am grateful.

While this is first a sailing blog, I feel compelled to mention my father’s passing as it was for him and my mother, that I first decided to begin writing this blog over eight years ago.  It’s safe to say that it was with my dad in mind, that I “penned” very single post and kept up with it at times when ideas for posts just wouldn’t come.  If it wasn’t for the simple question of “what would Dad be interested in reading?” I doubt that I would have continued.

Dad was a tireless fan of my blog and each time I sat down to write, it was for him that I put down my thoughts.  That’s not to say that my mother wasn’t an important motivation to me as well, but it was Dad that sat down in the evening, called up my site, poured a glass of wine for him and my mother and proceeded to read my posts out loud as they enjoyed an evening cocktail.  It was exact image that was in my head as I wrote every post and chose every photo or video.

Every step of the way I pushed the button on my “Spot” GPS transponder, so that they would know where we were and it was always a great treat to call him on the phone to check in as we moved from harbor to harbor and have him say something like, “Wow, you are making great progress” as he viewed Pandora’s location on Google Earth.

In spite of the fact that I spent countless hours with him over the last year as his health slowly deteriorated it didn’t make it any less hard to handle the finality of his passing.  However, I take comfort in knowing that this blog, in a small way, is a legacy to him and the unique pleasure he took in “living vicariously” through my words and pictures.

As I look back on the last eight years and over 350 posts, it makes me happy to know that these “conversations with Dad” will live on long after he’s gone.

Dad was only aboard Pandora a few times but I am thrilled to recall these days as perhaps some of my fondest.

I recall the first time both he and my mom were aboard shortly after we took delivery of Pandora.  While we kept her on a mooring in Norwalk CT, I was able to find a slip to pull into so that we could bring my Mom’s wheelchair down the ramp to the boat and help her aboard.  With the help of my friend Chris (the same marine artist guy that I wrote about in a recent post) we were able to get her aboard and headed out for a terrific afternoon sail.  This shot pretty much sums it up.  A great day. 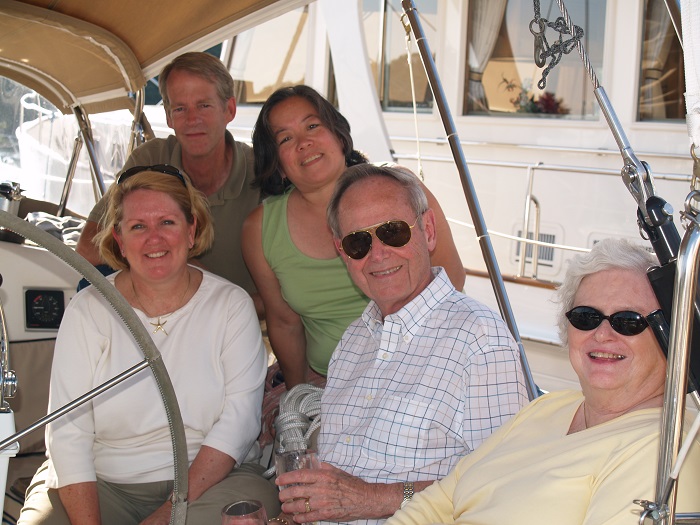 Another time Dad came out with me and our boys when we took a run from Wickford RI to Cuttyhunk and on to New Bedford a number of years back.  It was a picture perfect weekend with bright sunny days and dense fog at sunset to complete the mood.  We hiked up to the top of the hill on Cuttyhunk to enjoy the overlook facing up Buzzard’s Bay. 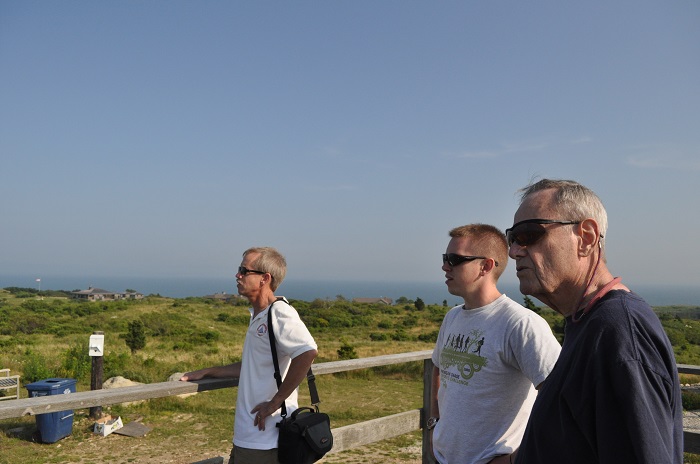 A passer by agreed to document the moment for us.  Three generations of Osborn men out having a “guy’s weekend”.    I recall that later that afternoon, as we sat on a mooring in the harbor, the fog rolled in.  Dad, who had not spent much time on the water, was entranced by the sight of the sun setting behind the fog. 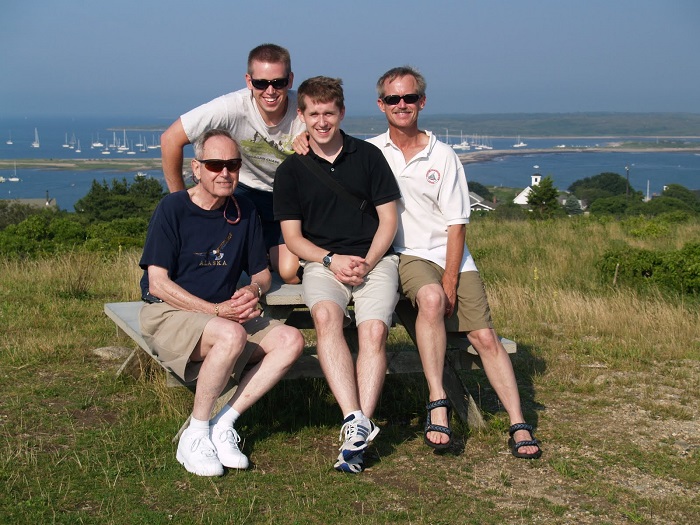 After Cuttyhunk we motored up Buzzard’s Bay to Fairhaven MA, across the harbor from New Bedford and picked up a mooring owned by fellow Corinthian Patty Jason.  We enjoyed a cocktail on her patio overlooking historic New Bedford Harbor, the perfect end to a weekend with dad. 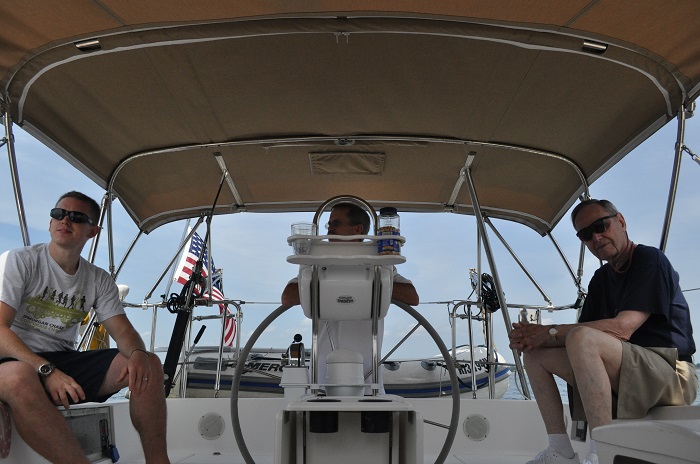 My dad was only aboard Pandora a few times but through my blog and the thousands of miles and hundreds of posts, he’s been aboard every step of the way.

For me, he will continue to be there as we continue or travels aboard Pandora and I will imagine him pulling up my posts on the screen while he enjoys a glass of wine thinking about me and Brenda and what we are up to.

I’ll will miss him terribly but knowing that, as I write this and future posts, he’s looking down and smiling makes me feel better.   That’s a good thing and, in many ways, the continuation of an era.   With that in mind, I guess I’ll keep writing.

I guess that the smile on his face says it all.  Yes, he approves, of that I am certain. 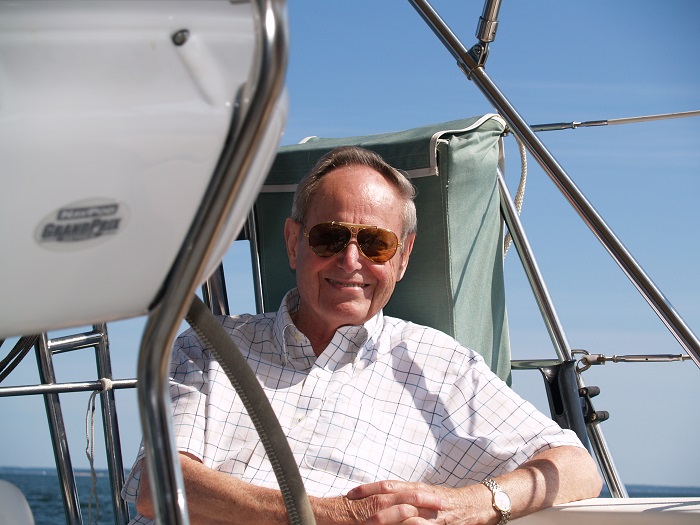 7 responses to “Eight years. An era comes to a close and renews again.”