>As I write this it’s early on Tuesday morning and we are on a mooring in Biddeford Pool, just off of the mouth of the SACO river, just south of Portland Maine. Yesterday we had a really terrific sail, hard on a NW wind, thanks to the last hurricane that passed by over the weekend. Usually, the winds are from the SW which would have made this an uphill slog so the fair winds were welcomed. Here’s a video that I took with Brenda’s new web camera that I took while we were bashing along to windward on the way to Biddeford.

With heavy rains forecasted for Saturday we decided to stay home instead of joining Pandora in Maine on Friday evening. So, instead, we left early on Sunday morning and drove our rental car to the Portland Airport in Maine and had a car pick us up for the last 1 1/2 hour drive to the boat.
I had some work done on the boat to take some vibration out of the engine which had been causing some difficulty this summer while we were away. Well, sometimes the cure is worse than the disease as the guy who did the work last week left two of the main deck hatches open. Well, imagine what the main salon looked like after a day of heavy rain being scooped down below. It was a swamp with the area rugs and cushions just soaked. When I began to move all of our gear out to the boat I immediately noticed that the two hatches in the main cabin were open and nearly had a stroke. Down below as a real mess and I was overwhelmed and upset, to say the least. The rug was so wet that water ran out of it when I picked it up and the same for the setee cushions. And the dining table varnish had turned the color of wax and looked awful. All the wet cushions weighed a lot and even moving them to the cockpit made everything along the way wet. Ugh!!!
Our friends, who were letting us use their mooring, were very gracious and assisted in setting the cushions out in their basement with a heater and fans to see what we could do to get things dried out prior to our departure on Monday morning. It made for a frantic evening but all the cushions were, amazingly, much drier the next morning thanks to a heater that made the basement nearly 90 degrees over night. I don’t want to think about what would have happened if the boat had sat for a week in that condition.
We will have to see how it all works out but perhaps new cushions are in our future this Fall. Oh well, the fun of boat ownership. They say that “into every life a little rain must fall”. I wonder if “they” were referring to rain falling in the inside of a boat. Not likely.
After getting all of our sodden stuff off the boat our friends loaned us a car, again very nice, to head off for our planned dinner with our new friend Ed, who we met on one of our last evenings on our last trip when we spent the night in “oven mouth” about 5 miles from where we had moored Pandora. Ed, while hearing our tale of woe treated us to an amazing lobster dinner. He cooked 7, I think. What a feast!! We even cooked some large crabs that he had also caught. I wished that I had brought my camera along but in the rush to “escape” from the sodden Pandora I forgot it.

Ed took pity on us and offered a spare bedroom for us to say in. We enjoyed his company till nearly midnight and had really wonderful evening.

Ed’s home overlooks the water and is furnished in a really lovely semi-nautical decor. You can see a lifetime of experiences in what he has in his home where he lives with his dog Phoebe. He has a wonderful collection of Victorian oyster plates displayed on his wall. Very nice. These plates predate the wide use of shaved ice to serve oysters and have ornate indentations that you set shucked oysters in. I am not describing them well. Of course, a discussion about oyster plates wouldn’t be complete without a link to http://www.oysterplates.com/. Lots of photos at that site but none as nice as Ed’s. Here’s one example from the site. In a day of lots of crushed ice these plates aren’t in style any more. 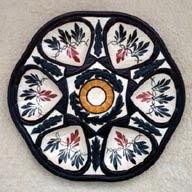 Another benefit of the two hurricanes that have run by in the last two weeks is that they have cleared out the unsettled weather that has dogged us all summer. The weather this week is just unbelievable with sunny days in the forecast for the next 10 days.

Our host at the quaint Biddeford Pool Yacht Club is a fellow SAGA owner Peter, a great guy. Peter is a retired new car dealer and has, with his partner, a substantial vintage car collection. His site http://www.mainlineexotics.com/ shows what an amazing collection he has. I understand that his 507 1957 BMW is one of only 200 made. My son Rob, the family motorhead would loose his mind over that car, I am sure. We met Peter and his wife Gina last summer in Rockland Maine at an informal rendezvous of SAGA owners. There was even one couple who live in Juno Alaska, although only for the summer. They winter on their SAGA in Baha when it’s too cold up north.

Back to Biddeford Pool. This tiny harbor is easy access on the way south from Portland and, in it’s heyday, was the summer home of Howard Taft. In the yacht club is a photo of a paddle wheeler arriving with the president. He had his summer home on the point.

A casualty of the hurricane. Not fun and they hope to float the boat off with high tide scheduled for later in week at the full moon. 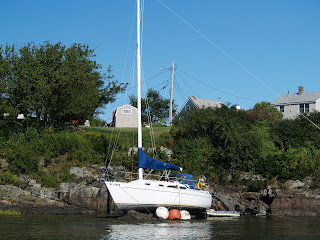 We went for a walk along the shore and enjoyed the sights. 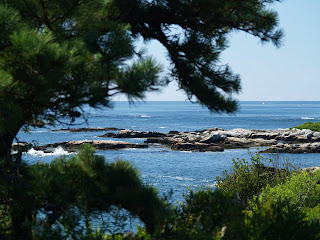 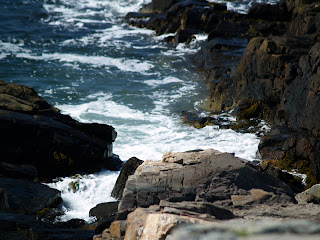 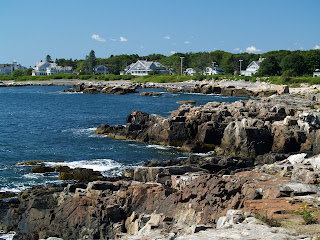 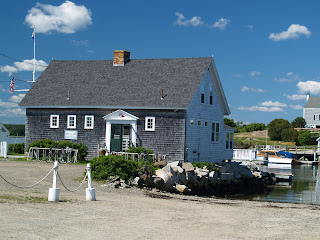 From Biddeford we continued south to Isle of Shoals off of Rye New Hamshire. More about that visit soon.