Marsh Harbor to Essex. Off to a great start.

Posted on May 19, 2013 | Leave a comment
It’s 09:30 on Sunday morning and we are sailing along in a moderate breeze of 11-14kts.   The winds are on our beam as they have been for the entire trip.  Amazingly, we left Marsh Harbor yesterday at 11:00 under sail and are still sailing some 20 hours later.   The only time we used the engine was for getting out of the harbor and for a short time leaving the Whale Cay Cut as we entered the ocean.  As anyone who sails would know, it’s usually inevitable that the winds will be unfavorable most of the time, regardless of where you are going.  I feel pretty lucky to have what looks like forecasted generally favorable winds for the bulk of our trip and really great winds so far.One of my concerns in leaving Marsh Harbor was transiting near Whale Cay Cut, a notoriously nasty piece of water where the depth goes from thousands to around 20′ in a few miles.  This causes any waves to pile up as they get closer to shore.  This recent post talks in some detail about the cut.  Happily, the sea swells yesterday, and today on the ocean, for that matter, are in the 3′ range so leaving the cut was a cinch.  Great luck there too.

As I write this we are about 150 nautical miles north of Marsh harbor which translates into an average over the bottom speed of about 7kts.  This takes into account the fact that we spent a good deal of last night in a gulf stream counter current or eddy which was flowing against us, sometimes more than a knot and for perhaps 8 hours we had a current in the 2 knot range pushing us toward the west.  This meant that we had adjust our heading further to the east to compensate for the westward set. Heading closer to the wind, as we compensated for the current, actually helped our speed as it put us on close reach, with the wind somewhat forward of the beam, increasing our speed into the moderate easterly winds.

Conventional wisdom suggests that you should head west from the Abacos and join up with the Gulf Stream to gain as much help from the northerly current that runs up to 4 knots, as you head up the coast.   In our case, Chris Parker, the weather router, suggested a course that stayed well east of the stream and due north as that heading would cut off as much as 100 miles from our trip.  It just didn’t make sense, with the forecasted winds,  to head west to the stream and then north to our destination.

So, for now, we are continuing north to a point just southeast of Cape Hatteras where we will join the gulf stream, take advantage of that current for a time and then jump out a few hundred miles north of that point and head to Montauk.

Chris, Ian and I have settled in nicely to what will likely be about a week on board with time spent keeping watch , reading and sleeping.  Oh yea, and don’t want to forget the eating part.  I made fresh biscuits for breakfast today.  In spite of some slightly queasy stomachs for Chris and Ian, they forced them down without a moment’s hesitation.   As usual, I am blessed with a cast iron stomach and, knock on wood, I haven’t had any problems with nausea yet on this.  Of course, it’s pretty calm out here so fingers crossed that my good luck will continue.

Our watch schedule (we have to be sure that someone is on deck all the time, night and day) is pretty simple.  From 08:00 to 20:00, when it’s light, the watch is informal as everyone is on deck enjoying the scenery, such as it is, with miles of water in every direction, punctuated by an occasional school of flying fish.    After 20:00 hours we go on a 4 hour watch system.  Last night, Chris took the 20:00 to 24:00, me the 01:00 to 04:00, with Chris came back on deck from 04:00 to 08:00.  Ian, who doesn’t have that much offshore experience, joined us for two hours of my watch and two of Chris’s.  This overlap helps as he was fresh when he came on deck as we were getting toward the second half of our watch and feeling a bit sleepy.   Tonight, we will switch watches with me doing two beginning at 20:00 and Chris only one.   That keeps things fair as we switch every other night.

Last night was particularly beautiful during my watch as there was a bright half moon until it set around 03:00 with the water sparkling with phosphorescence  as Pandora made her way steadily northward.  I love the 24:00 to 04:00 watch as it’s so peaceful and there isn’t usually much going on.  Last night I only saw a single ship and after speaking with the officer on watch, a woman, she indicated a plan pass to my stern and at a good distance.   Speaking with her personally made me much more comfortable instead of wondering what her plans were.

For much of the time on watch, I enjoy reading or listening to music on my i-pod.    For me, when the sailing is easy and at a good speed, I can’t say that there is any time when I feel more at peace, ashore or afloat.  It’s very nice to be at sea.  And, it’s a good thing that I feel that way as this trip will keep us underway for a week or more and that’s a long time to be underway.  Most folks tend to break up a trip like this into segments but I prefer to just go without stopping and avoid entering or leaving harbors along the way, especially ones that I am not that familiar with.   I’d much rather be 200 miles from the “hard stuff” than to be inshore dodging rocks and shoals.   Being close to rocks with Pandora gives me plenty of cause for anxiety, that’s for sure.
It’s an amazing contrast from the trip south with Brenda which we stretched to a full three months as we meandered down the Intra Coastal Waterway (A great trip BTW).  That same distance, now in a straight line offshore, will only take about a week.

So, where’s Pandora?   We are currently about 200 nautical miles east of north Florida.  That’s a really long way from land.    If you want to follow our trip on this site, just click the “where’s Pandora”  button and you will see…  I will be updating our position every four hours for the entire trip.  These position “spots” will be in place for up to two weeks and then they are automatically deleted.

So, how’s it going?  So far so good with our  first 24hours taking us in the neighborhood of 170 nautical miles, and with some unfavorable currents against us, that’s pretty impressive.   With some luck, the weather will hold and we will be able to sail much of the nearly 1,000 miles home and arrive in Essex at some point toward the end of the week.   It would be perfect if I could arrive in Essex, at the club, in time forFriday or Saturday cocktails.  One can only hope…  By that point I’d have to make a pit stop for a shower prior to joining the folks in the bar.  Minor detail.

It’s quite beautiful out here on the ocean and last night’s sunset did not disappoint. 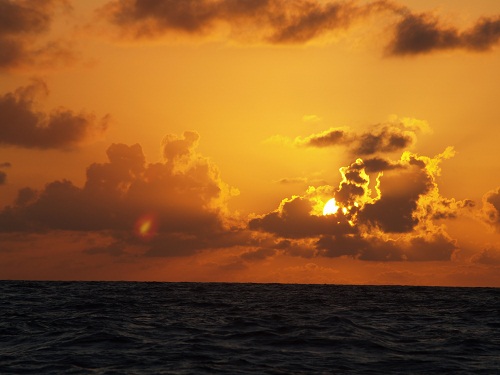 So far, so good with our trip less than 20% completed.  No, that doesn’t sound like much but don’t forget, we only left yesterday.
Wish us continued smooth, and fast, sailing.

That’s all for now, SV Pandora signing off…