Heading Home from the Bahamas,Finally

It’s 13:30 on Saturday and we are offshore and headed for Essex and home for the summer.  It’s hard to believe that I have been aboard for nearly 8 months since Brenda and I left Essex Yacht Club way back in early September.

I can still recall when, not that long ago, our trips aboard were measured in days instead of months and I have to say that I am really looking forward to being home for a while and not worrying about the weather and gear issues with Pandora every day.  So far, and there is nearly 1,000 miles ahead of us until we arrive in CT, there have been no major gear issues but a number of fiddly things that have caused problems, mostly minor.  Fingers crossed that my good luck will continue for the rest of the voyage.  On the gear side, fingers crossed that things will continue working for the next week.   22 miles into our trip, so far, so good.

I spoke with Chris Parker, the weather router that we work with, both yesterday and this morning to get the latest information related to wind, seas and current for our trip.  Usually, it seems that the wind is always from the direction that you want to go but it seems that we should have fair winds that should hold for most of the trip.  That will be important as I do not carry enough fuel to allow us to motor all of the way.    I was very concerned that a great weather window would come and go prior to my crew arriving but as luck would have it, a great window that opened up yesterday, so it looks great.

If all goes well, we hope to make the trip in about a week and that’s important as there is a strong possibility of a cold front heading off the east coast later in the week, around Friday.  By that time, if we are not past Montauk we may have to stop somewhere until the weather passes and fair winds come into play again.   We will know more on that point in a few days.

In order to make it there in time, we will have to make an average speed of about 6kts, which should be pretty easy for us, provided that the wind stays fair.  As I write this we are averaging about 6-7kts, and most of the time at 7kts or better, with fairly light winds of about 10ks on the beam.  Of course, as they say, “past performance is no guarantee of future success”.  Well, I think that’s what they say or something like that.  As I am way out of phone and WIFI range, there’s no Google to lean on for answers.

Speaking of WIFI, I will be preparing these posts and will send them to Brenda via the SSB long range radio.  She will take them and publish them, along with some photos, hopefully.

Our plan is to use the SPOT, GPS communicator, as we have in the past, and will be “pushing the button” every four or so hours, 24 hours a day for the next week, or until we get home.   Check out the “where’s Pandora button to see our current location in real time, sort of.   I also hope to put up a post, provided that Brenda’s social calendar permits, at some point each day for our voyage.
The last few days have been very hectic as I have been preparing Pandora for this trip, with runs up the mast to repair burned out bulbs, trips to the grocery and other final preparations.  To say that a 1,000 mile voyage, hundreds of miles from land, is a big deal doesn’t begin to make the point, as it seems to me.   I have sailed thousands of miles but have only been offshore a few dozen times including a trip back from the Bahamas last May on a friend’s boat.  And, for that run, we were much closer to the coast and stopped half way, in Beaufort for fuel and gear issues.  And, of course, there were the 15 or so trips to Maine, across the Gulf of Maine, but those trips are only a few hundred miles and we were never more than 100 miles from land, usually closer.  I also did a trip back from Bermuda  which was about 700 miles, and that was over 15 years ago.

However, Pandora was built for trips like these and she is fitted out with all the latest safety gear including a four man life raft.  I am very hopeful that the raft is one piece of equipment that I will never try out.  So far, so good.

Anyway, it’s a beautiful day here on the ocean just north of the Abacos and if you are wondering,  “nope, we aren’t there yet!“

Perhaps I will close with a shot of the last sunset, sort of as it was two nights ago, that I saw in the Bahamas this year.   Yes, I am happy to leave but I am very much looking forward to returning next February.  For now,  I am all about being HOME.  Hey, here’s an ideaůhow about a hot shower?  Now, that’s something that I have not had since early September,  unless you count the brief visit home for Christmas.  Hmmm… only a week to go.  Oh, will I be ready then.

A fitting shot of a beautiful Bahamas sunset and a perfect metaphor for Bob and Brenda’s FIRST most excellent adventure. 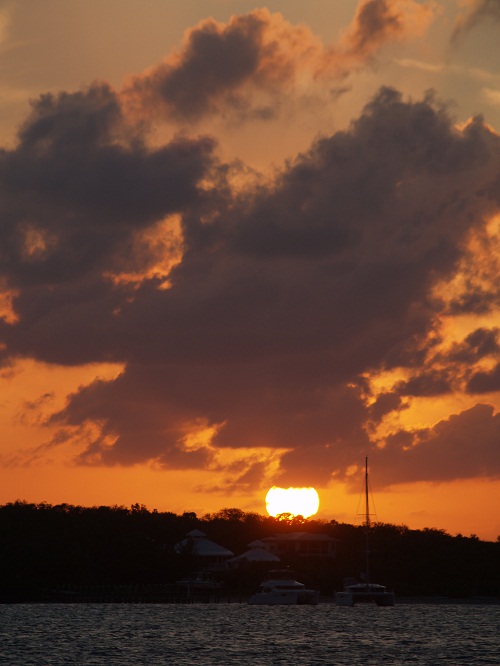 One response to “Heading Home from the Bahamas,Finally”