Green Turtle Cay and other wildlife, even green turtles.

It’s Saturday morning and the sun is out here in Green Turtle Cay.  The sun is out…how unique.  Not really as it’s nearly always sunny here.  Now that it’s spring at home this warm weather doesn’t seem quite that unique any more.  Having said that, it’s been really wonderful to be in a place where the temperature doesn’t vary by much more than ten degrees, day after day, month after month.  Some say that they’d hate to loose the change of the seasons.  I believe that those folks are just rationalizing that they live in an area where the climate is nice for about half of the year.  For the other half they are either freezing or roasting while they are chanting “I love the changing seasons, I love the changing seasons”.. Go ahead, keep trying to convince yourself.     How did the slogan go?  “It’s better in the Bahamas.”   Yes, I am convinced.

Perhaps my love of the “no season, seasons” is clouded by the fact that this is my first opportunity EVER, in my whole life, to avoid the cold.  Yes, it’s still novel but I expect that the “novelness” won’t wear off any time soon.

Ok, enough about the weather.  Let’s talk about how great this place is.

We are anchored in Green Turtle, White Sound, a lovely little harbor that is protected from all directions.  After months of running for cover every time the wind direction changes, it’s great to be somewhere secure for a while.

Yesterday we went for a walk on one of the sheltered sound side beaches.  The one that was recommended was Co-Co Bay, a mile plus long beach on the sheltered side.  We have found that the shelling is better on sheltered beaches than on the ocean side where shells tend to be ground into powder before they even reach the surf line.

The best time to look for shells, or walk on the beach, is at low tide.  It’s easier to find shells when the water is low even though the range here is about three feet. Having said that, with the full moon, the tide range yesterday was more like four feet which exposed more of the beach than normal.  That made for particularly interesting shelling.  Areas that are normally covered, even at dead low, were shallow enough to walk through.

The beach was very peaceful and serene.  Brenda and I were alone with the exception of one other person we ran into along the way.  It turns out that she was from New Jersey and visiting friends.  It’s indeed a small world.

These flats are very pretty. 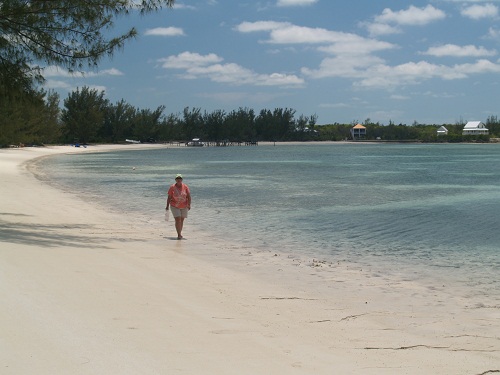 We don’t know what makes these little humps but some sort of critter spits out sand in great volume, creating these mounds.  Normally, they are under water but with this very low tide the view was very interesting with small bumps all over the place.  Brenda was pretty creeped out imagining what was lurking just under the surface that might grab her toes.    Alas, her desire for shells won the day and she braved the wild mounds. 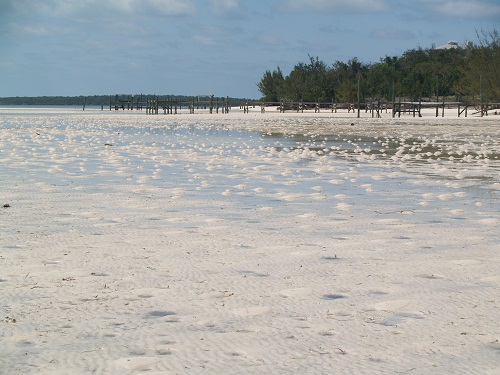 This beautiful star fish was over a foot across.  Believe it or not, this photo was taken through a foot of water.  That’s gin clear water. 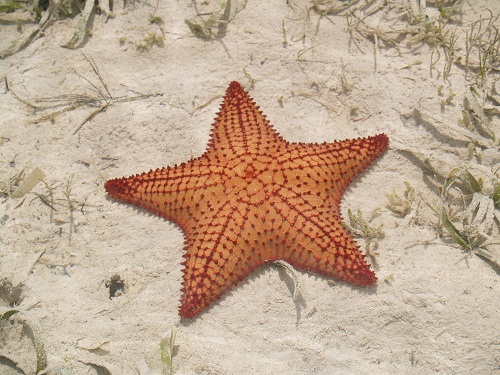 This urchin looked like a lot of the guys that we have met who cruise, present company excluded, sort of.  A bit sparse on the top.   I expect that being “bald” will make this one an easy target for a ray or nurse shark.    Hmm… Urchin roe anyone? 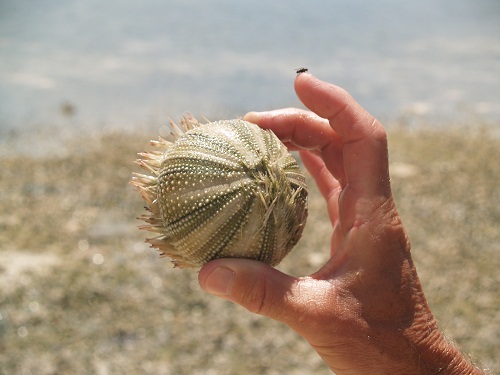 This little guy was very hard to spot but what an amazing creature.  He didn’t seem too terribly distressed.    I guess that he could tell that my hand was a lot softer than his shell. 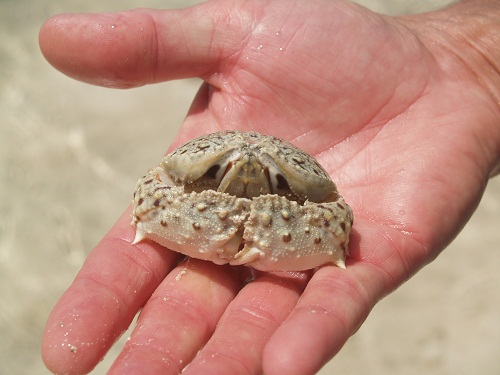 After a few moments he opened up to check us out.  Notice that I changed my grip when the pincers came out. 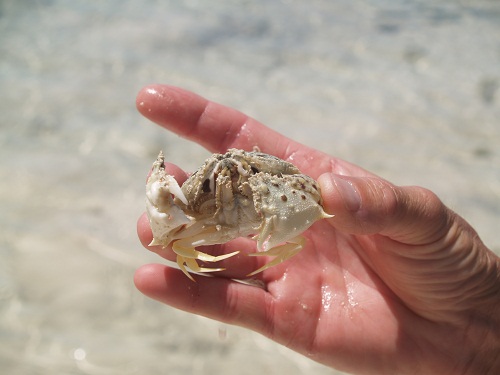 The homes in this area are pretty large.  This flying boat was parked in front of a particularly nice spot.   Interestingly, just a few houses down was another identical plane.  I found myself wondering if this was a classic case of “keeping up with the Joneses”.   The first home we passed was clearly the winner as parked in front, along with the plane, was a 60′ motor yacht.  “OK, just try keeping up with that neighbor!!!”    What fun it would be to taxi down the beach, into the water and off for lunch in Miami.  I would do that. 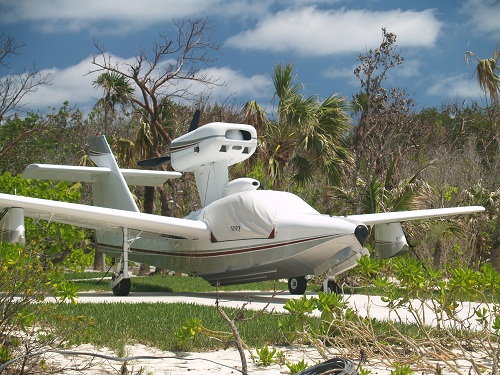 Speaking of eating out.  (Nice segue Bob) We had a wonderful dinner last night with our friends Larry and Susan who live aboard their Valiant 42, Moira.   We have enjoyed their company a number of times over the last few months and it’s nice to be in a harbor with them again.    The dining room is just off this wonderful patio at the Green Turtle Club. 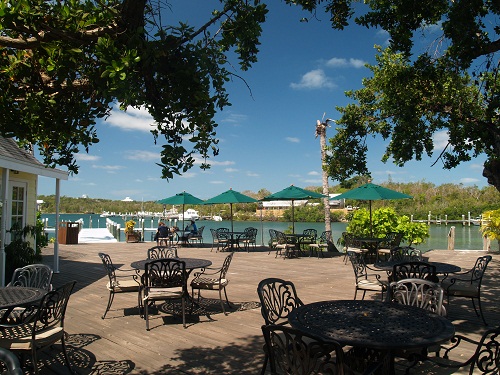 As it’s spring here (Yes, the seasons do change, a little.  It rains a bit more, but not that much.) and this native orchid was in full bloom.  I think it is an encyclia species.  Brenda and I had a greenhouse with hundreds of orchids for over 30 years.   The orchids had to go as we spent more and more time aboard.  Oh well, time marches on.   Seeing this plant brought back memories. 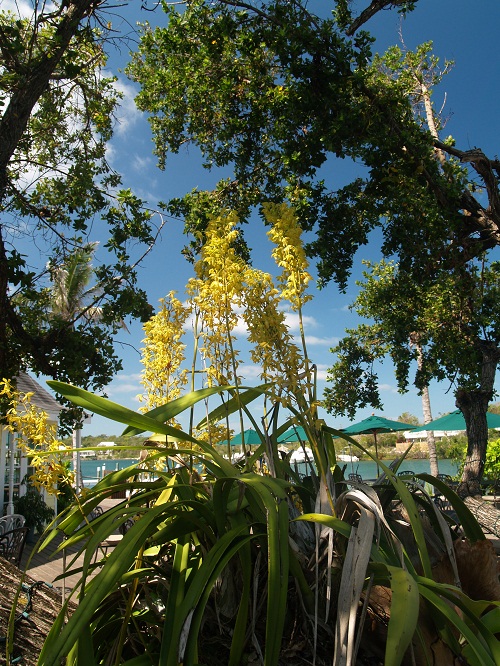 There were hundreds, many hundreds, of little 1″ flowers.  Quite charming. 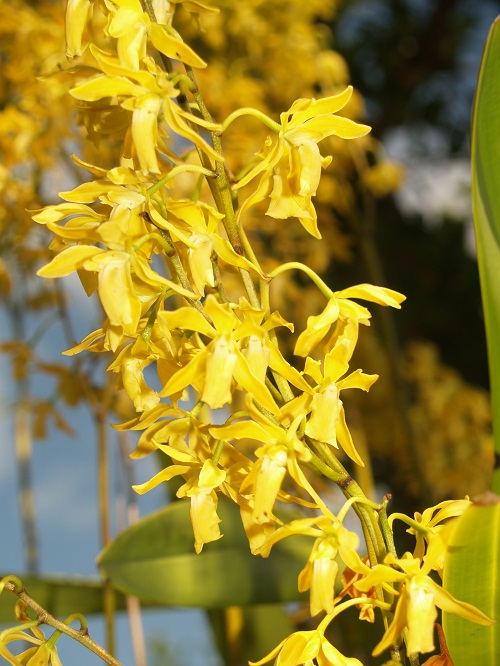 Perhaps a bit random, but this guy, who went back and forth near us a number of times yesterday, reminded me of one of those duck shooting games at an arcade.   His boat seemed impossibly small and the little motor buzzing away was quite comical. 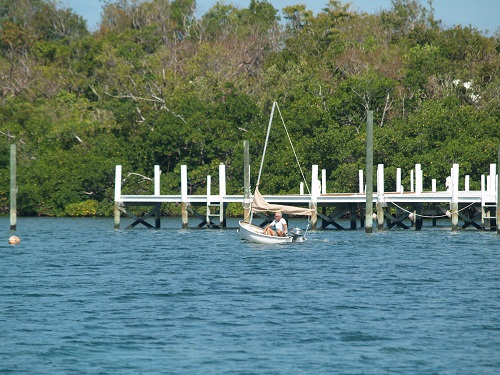 I guess that I should get the lead out and move in with my day.    Almost forgot.  When we were anchored outside of this harbor we did see a few green turtles.  It’s always funny to watch them pop up their heads to take a look.   I swear that they were looking at me, looking at them.