Deck the Hulls Matey. We aren’t in Kansas any more.

It’s Monday morning and the sun isn’t yet up here in Cocoa.  Having said that, I expect that today, like the last few days, will begin with an absolutely wonderful sunrise.  I have to take sunrise photos as it is the only way that Brenda can enjoy them.   She has often said that her natural state is asleep.  Unfortunately, that “natural state” often alludes her until around dawn.   So, photos of the last two sunrises when we were in St Augustine are for Brenda. 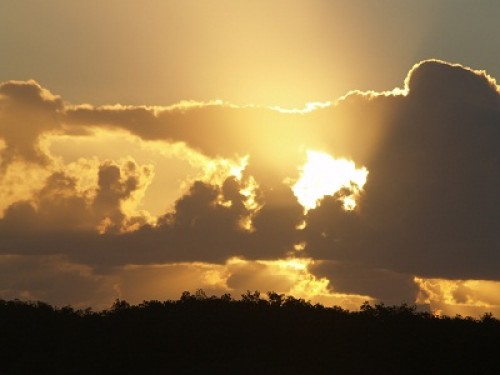 If one fab sunrise is good, a second is better. 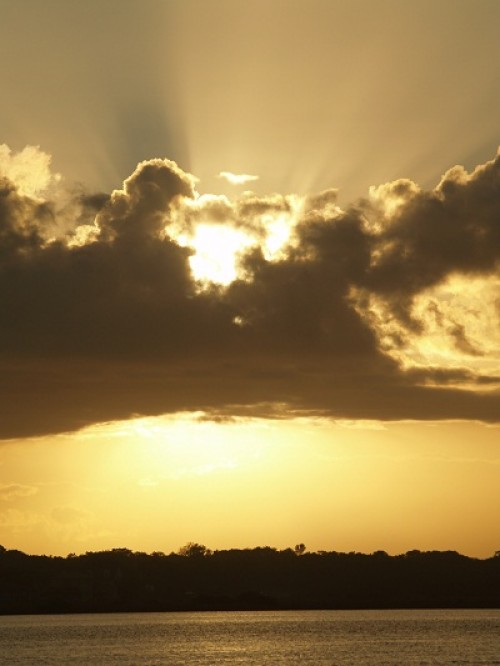 Yesterday we came through Mosquito Bay and area that was just a ditch run through miles and miles of a shallow bay that is rarely more than five feet deep.  Even though there was water all around us the constant threat of running aground kept us on our toes.  After a nearly 50km run for the day we were tired and had certainly had enough.   The wind had also piped up so that we were motoring into it after some motor sailing earlier in the day.  Having to stay in the channel to avoid running aground was made even more fun given the large amount of weekend boat traffic.   Adding an additional bit of tension was the fact that my max prop has been vibrating a bit, something that shouldn’t be happening as I had it rebuilt a few years ago.  I expect that it needs more grease in the hub which I will pump in today.  However, there may be more to it, perhaps the shaft log nuts are loose.  Who knows. Vibration in the running gear is not a good thing as it, if not addressed, can shake other things loose.  Fortunately when this happens, I can put the shift into reverse and then back in forward which smooths things out.  Having said that, it can’t be good for the transmission.

My friend Keith, who has run his boat north and south many times, says that you are really in Florida after you pass St Augustine.  I believe him as while the water temperature, which was stuck in the low 60s for much of our trip south, rose by nearly ten degrees shortly after leaving St Augustine.  While I don’t know if it was just a different weather pattern over the last few days, we are now enjoying our first warm weather (that’s no heat required in the evenings and mornings and shorts during the day) in a long time.   Over the last few months, we have chased the cooler weather and water temperatures south as we progressed along the way.   Warmer is better as I will have to go for a swim today to deal with the prop as well as the shaft and prop zincs that need to be changed.   I am also glad that the water is somewhat clearer,  I expect that the visibility is at least a few feet here, something that we haven’t seen since we entered the ICW.  Tough to handle zincs when you can’t see anything. It’s a good thing that I have the hookah dive compressor as it will take me plenty of time to get all of this done.

Setting aside the drudgery of yesterday’s run, the last few days have been great fun.  In particular, we have watched the scenery change from miles of marsh to a mix of wetlands and residential development.   While it may have happened sooner than I realized, we have now entered an area of mangrove instead of the grasslands that were dominant further north. 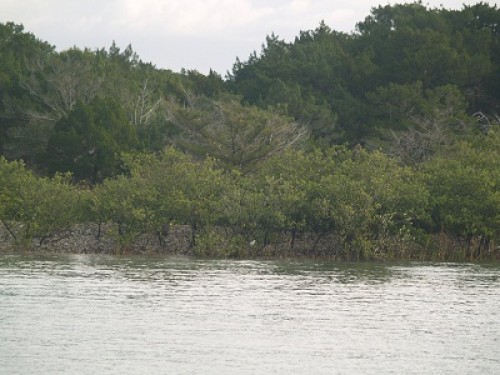 This was a nice looking lighthouse that we passed on our way past the Ponce De Leon inlet, just south of Daytona beach. 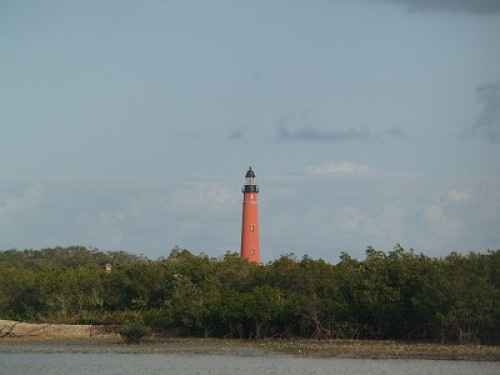 There are plenty of bridges in Florida and the further south we get the more there are.  Within about one mile in South Smyrna we passed five bridges.  To give this some context, in all of Georgia we only went under five.

As we looked behind us, three. 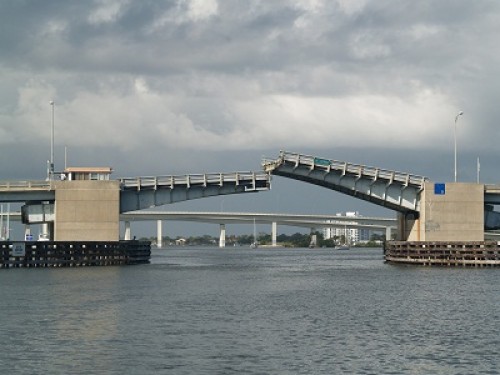 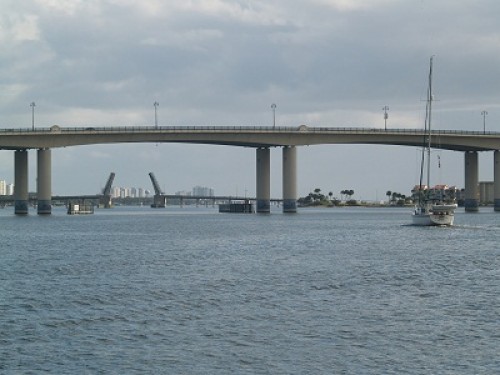 Love the mosaic work that was on every piling of this bridge. Perhaps it was a plastic stick-on, but I couldn’t get that close to see for sure.  My vote is for something more durable.   This sort of ornamentation wouldn’t hold up well in the north. The attention to detail certainly demonstrates how important the water economy is here in Florida.  “If you like this bridge, you’ll love our city.  Stop and spend money!”  I stopped but didn’t get off of Pandora to spend a dime.  Sorry. 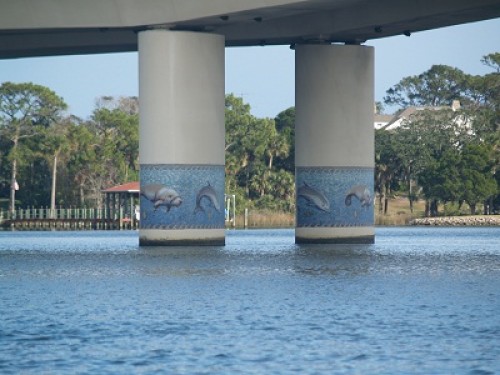 We are also in manatee country but have not yet seen one yet.  Given the fact that these gentle creatures don’t swim very fast, it’s amazing that there are any left given the massive amount of boat traffic where they live.   I am told that nearly all of them have nasty scars on their backs from the props of passing boats.   Very sad.

On a lighter note, we had our first dose of Christmas boat parade when we were anchored in New Smyrna.   As we headed toward our destination we passed this boat with a full, and well amplified, band on board.  That and the pirate motif are certainly writing home about, and that’s what I will do.  Or, at least I’ll include photos.   Pretty funny. 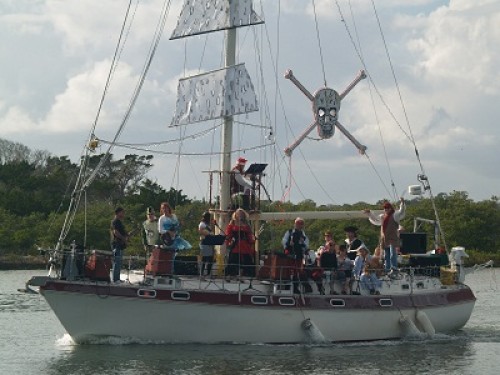 I wonder if they had life jackets for all on board?  I am trying to imagine how a Coast Guard boarding would go with this group.  “Matey, have yee flotation devices for your crew and wenches?”   So, any votes as to who is the captain?  My vote is for the grumpy guy on the left.  Behind him, head wench?  Well, at least happiest wench. 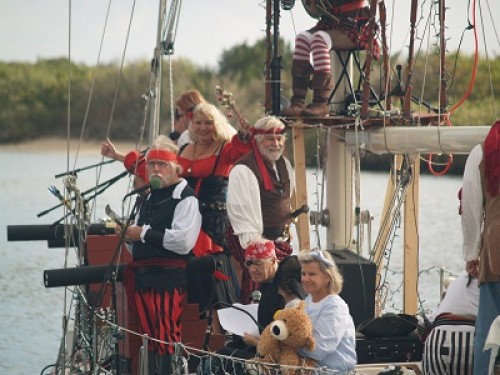 This vessel had everything a pirate could want, even a trusty teddy bear.

We anchored south of New Smyrna and had dinner in the cockpit with some friends, Ginny and Ted off of Firecracker, a sistership to Pandora.  They too are on their first run to the Bahamas.

As the evening progressed, we were passed by boat after boat heading to the start of the parade.  This one, unlit was just a hint as to the extent of the decorations. 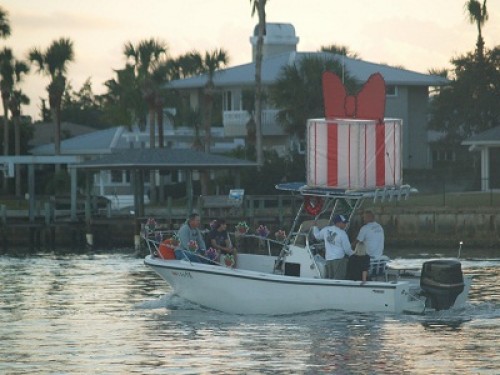 Later, after dark, all the boats passed us again, ablaze with lights.  And, all this in the company of the Coast Guard, complete with flashing blue lights and a good attempt to show that they too knew how to “deck the hulls”.  I guess this is the one time of year when the rules of the road for vessel lighting are suspended.   It was too dark to get a good photos as the boats paraded by but this will give you a feel for what it looked like.  Well, this is what Santa and Rudolf would have looked like if you had enough to drink, which we did. 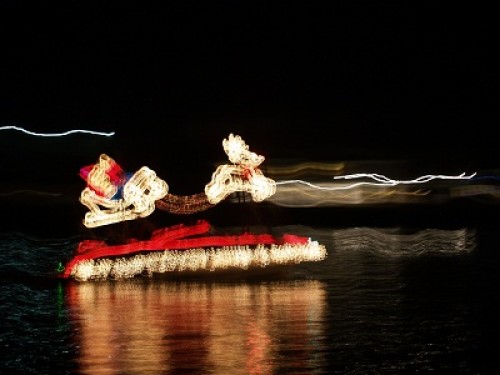 What was this?  Don’t know, but it was blue. If I recall, the little brown guy on top was Snoopy. 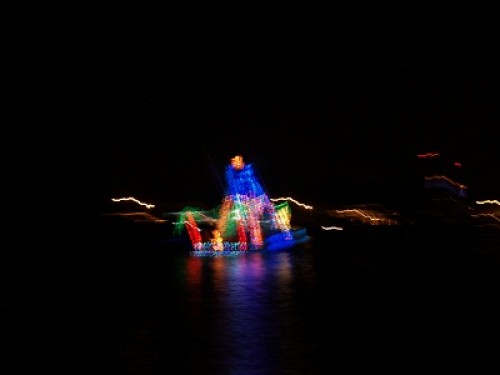 Yes, this was a sport fisherman, complete with outriggers. 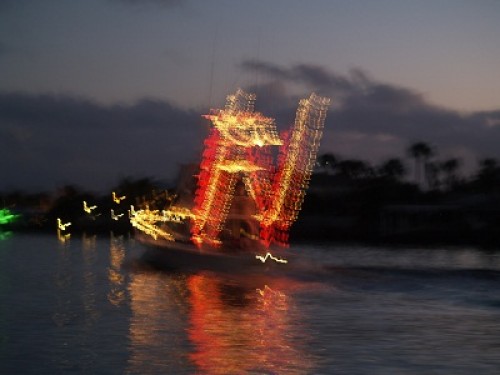 It was a great show for sure.  I am beginning to get used to this palm tree Christmas thing.   Yes, it’s looking pretty good.  And no Dorothy, we aren’t in Kansas any more.  That’s for sure.