It’s early September and Pandora is now in what I hope are the final stages of getting her new lithium house bank installed.  Yes, STILL.

Last week I decided to pull the plug on the marina in Deltaville and move Pandora to a friend’s dock nearby.  There remains more to do so I am bringing in another electrician to review what had been done to date and to recommend what would be needed to finish the install.

I made this decision as when I arrived in Deltaville to consider next steps earlier in the week as I just could not get a straight answer about how much time it would take to get the job done and how many more hours at $100/hr would be needed.

It’s worth noting that when I received my last double digit bill the yard  threatened to haul and impound the boat, when I questioned the number of hours that had been billed.   To me, that seemed very aggressive given the fact that it had only been three days since I had even gotten the bill.  Well, I paid it, under duress I assure you, but it is still not clear to me as to how they had managed to spend literally weeks working full time on the boat, with no clear completion date in sight.

Recall that what has become a very painful saga began in mid May when I brought Pandora back from the Caribbean.  It is hard to believe that it is now Labor Day, an entire summer has gone by and the job is still not completed.    There remains some work to be done on the AC side of the system as well as some troubleshooting on the DC side along with programing of various contr0llers.  And, we are nowhere on the install of the wind generator.

Here’s Pandora at my friend’s dock, a very lovely place to be sure. 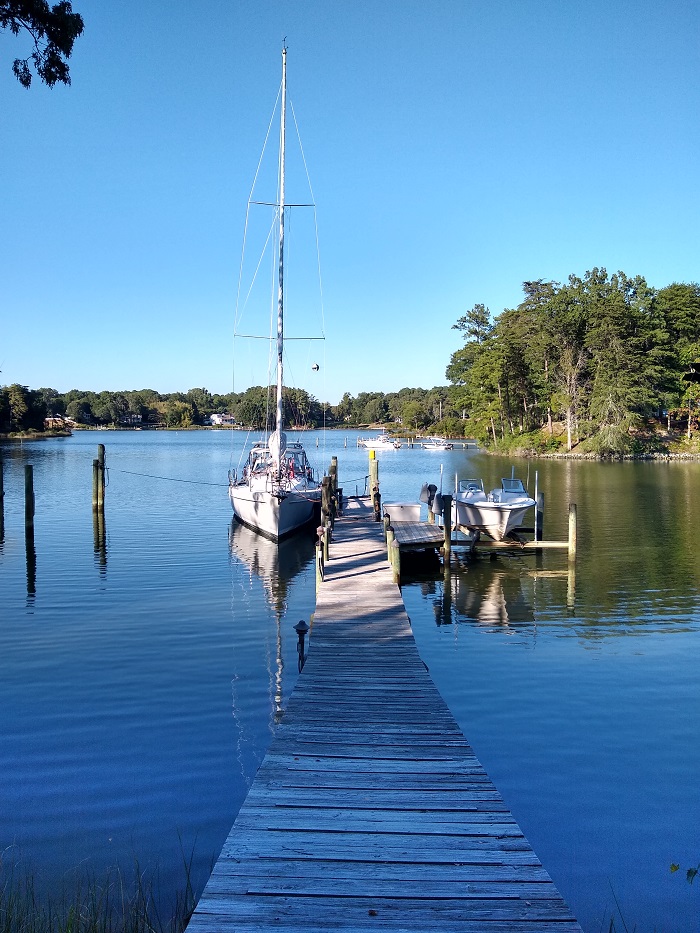 My plan, all along, was to get the work completed and bring her back to CT so I could get other work done before I headed south to Antigua at the end of October.  Additionally, the Salty Dawg Rally is now offering a departure from Newport and I wanted to give that a try.

Alas, the original delivery date for getting Pandora back was mid July and the yard totally blasted by that.  Silly me, I should have known I was being hosed.  Now it’s September, Labor Day, and the job was still not completed.  My only regret is that I didn’t pull the plug weeks ago and move the boat.

Ok, so now that there is a new tech focused on the boat, I am cautiously optimistic that I will have Pandora’s electrical and wind generator work by mid September when I will run her to Annapolis for some rigging and hull scratch repair at M Yachts.  Steve, the owner, is being very supportive and expects to turn the boat around quickly.  I’ve had work done there in the past and believe him.

With our son Rob and his family, complete with three grandchildren, only an hour from Annapolis, I am looking forward to visiting them when I am working on Pandora.  Tori, in the middle, the oldest, is starting kindergarten, flanked by Emme and Rhette.  Adorable. 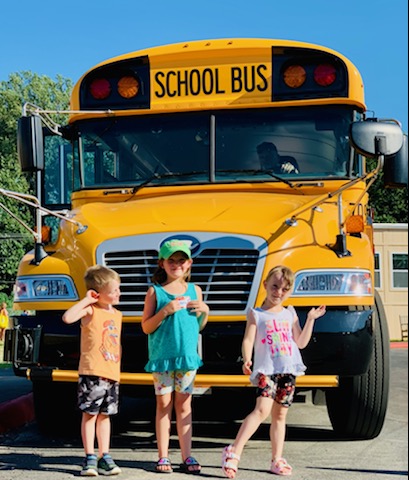 After I get Pandora ready, I will head down to Hampton to join in the fun leading up to the departure for Antigua and the Salty Dawg Rally to the Caribbean.

And, speaking of the rally, registration is running ahead of any year on record and I expect that we will soon be forced to cut it off.  It pains me to think that we may have to say no to some boats that delayed in signing up as in past years we have taken registrations up until a few weeks prior to departure.   However, this year, it seems that just about everybody that has considered heading south is doing it NOW!

As the pandemic winds down it looks like many are adopting YOLO, you only live once, and have decided to get out of Dodge and head for warmer climes.

This departure time in Hampton will be thrilling for me as president of Salty Dawg and I am SO looking forward to addressing all of those enthusiastic skippers and crew as they prepare to head south, many for the first time.

The bulk of the boats, upwards of 100 or more, will be heading to Antigua, my favorite island, and some to the Bahamas as well.

This winter will be a milestone for me and Brenda as we embark on the beginning of our second decade of seasonal cruising that has taken us the entire length of the US east coast, the Bahamas, much of Cuba and most of the islands of the eastern Caribbean from the USVI south nearly all the way to Grenada.

I have to say that I am very excited about sharing the islands with so many other cruisers, or Dawgs as we like to call them.

All I can say is that I sure hope that getting the rest of the work done on Pandora, abbreviated though it may be, goes smoothly.

I’ll be sharing the “lessons learned” about all this in future posts.   One thing for sure is that this turned out to be the most frustrating process EVER in getting work done and, for me, crystalized what the phrase means when someone says BOAT, Break Out Another Thousand…

Let’s hope that all of the expense and frustration pays off and that the new lithium bank and upgraded electrical system lives up to it’s promise.

Perhaps I’ll focus on what is to come, a winter of sunshine in the islands.   Yes, looks like it will be fun.  I can almost taste that rum punch at sunset with friends aboard Pandora. 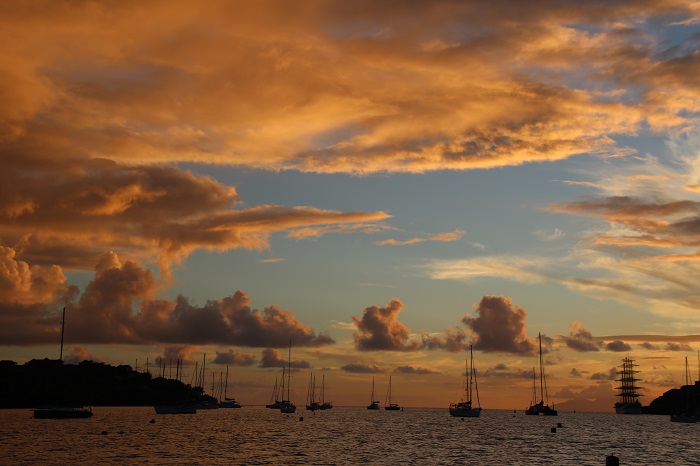 I guess that I have to say that the SAGA continues but hopefully, no more surprises await.

That’s all for now.  Time to head to the farmer’s market.

2 responses to “The saga continues…”