It’s hard to believe that our winter of cruising the Caribbean is almost over.   I will admit that Brenda has a somewhat different view of this than I do and is a lot more excited about our flight to the US on April 10th from Antigua.

I like to begin a post with an image that is sort of reflective of what’s going on so here you go.  It’s been hard…chillin. 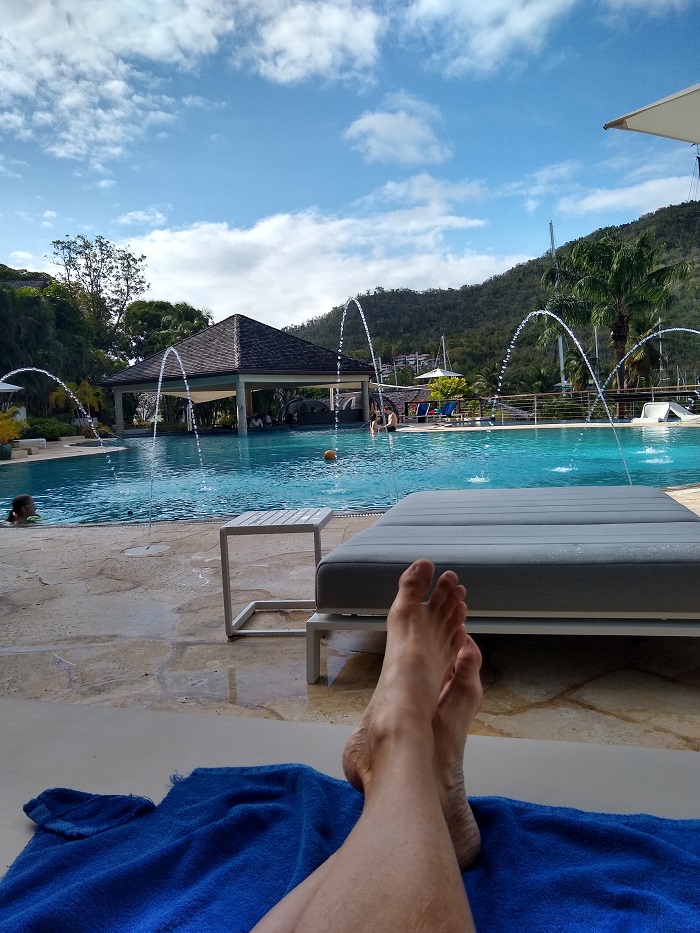 We are spending about two weeks here at the Marigot Bay Resort, tied up at the dock, AC cranking away while we waste water with, sort of, long showers aboard.  Actually, compared to folks on shore, our normal water consumption aboard Pandora is about 15 gallons per day and now on the dock a whopping 30 gallons per day, I’d guess. 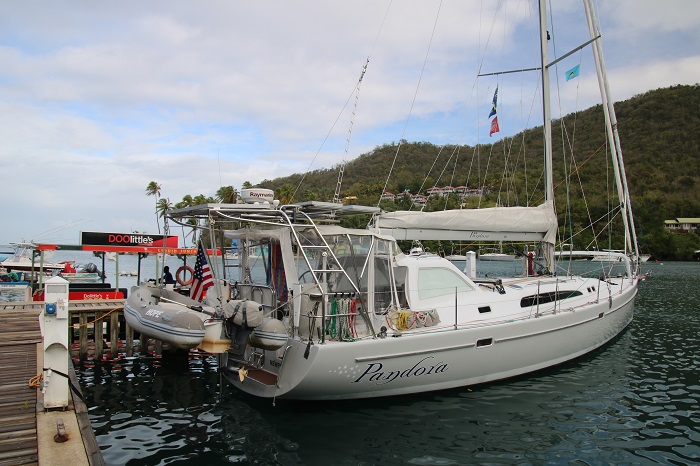 The view from our cockpit is, well, tropical. 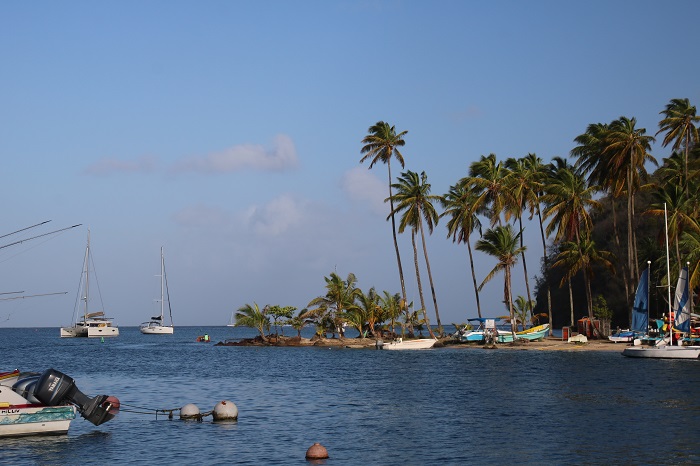 And while we are spending about $70/day on the dock, the visitors in the hotel are paying about $500/night.   Such a deal! 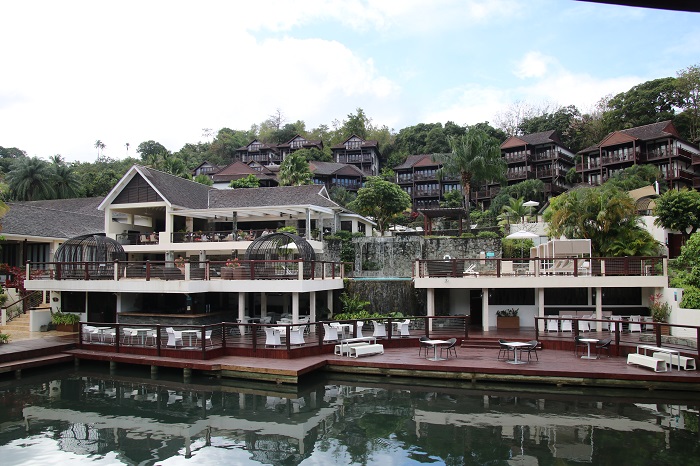 To be able to enjoy the pool while paying about the same cost as a mooring in Martha’s Vineyard is pretty appealing.   Brenda has actually been doing a bit of weaving poolside. 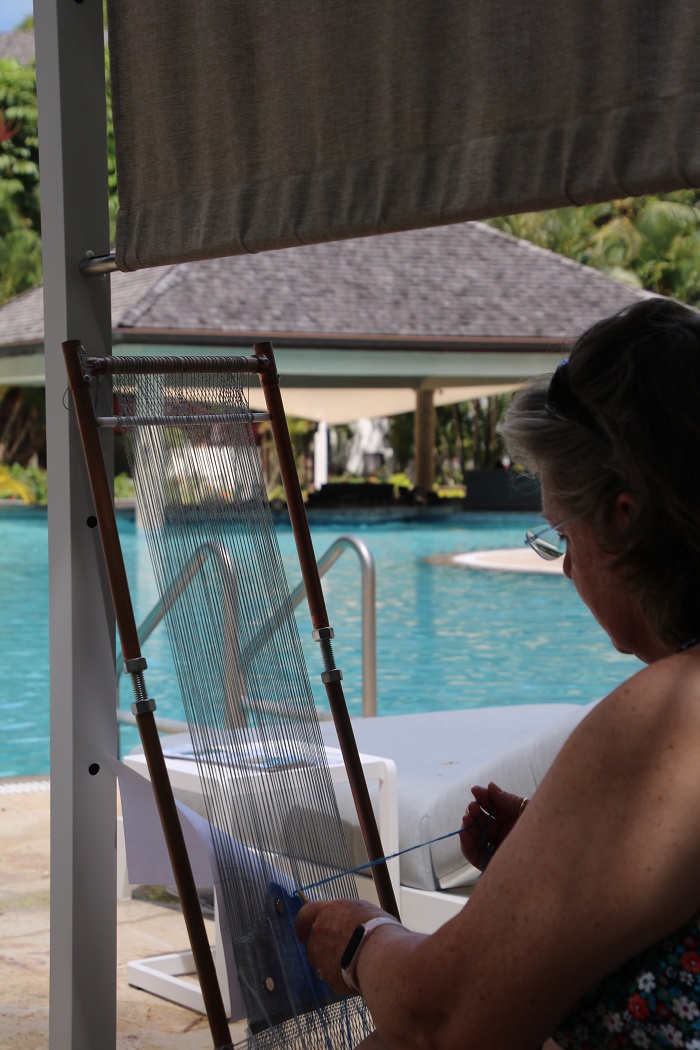 Not a bad spot to spend an afternoon. 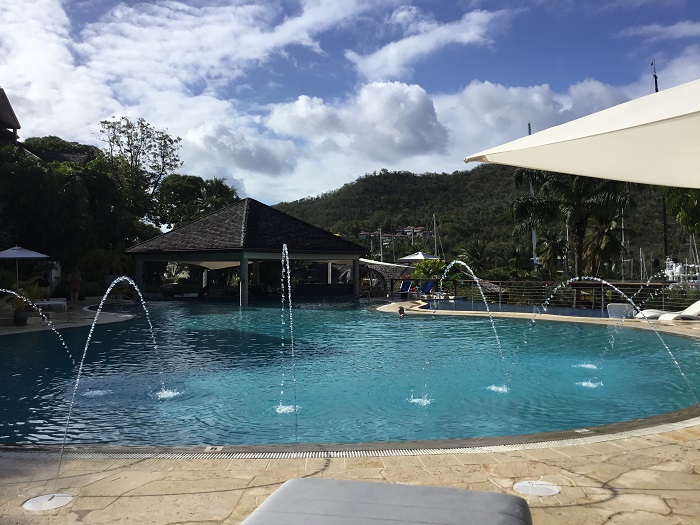 We have met some really interesting folks here including the crew of a nearby mega yacht, a huge catamaran, the third largest in the world. 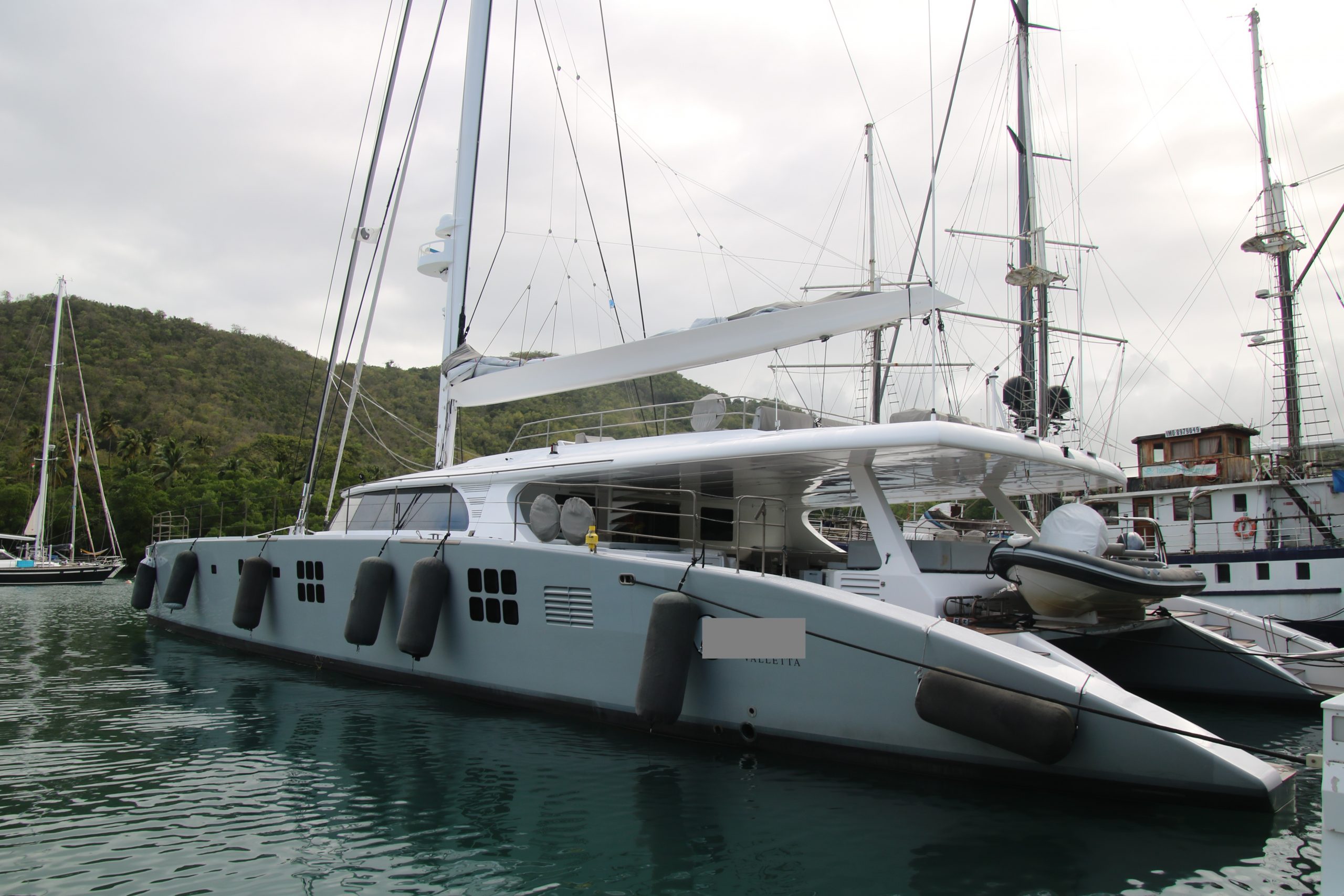 We have enjoyed some fun evenings aboard Pandora and their digs. How about a singalong?  Her cockpit is wider than Pandora is long.  Big frigging boat. 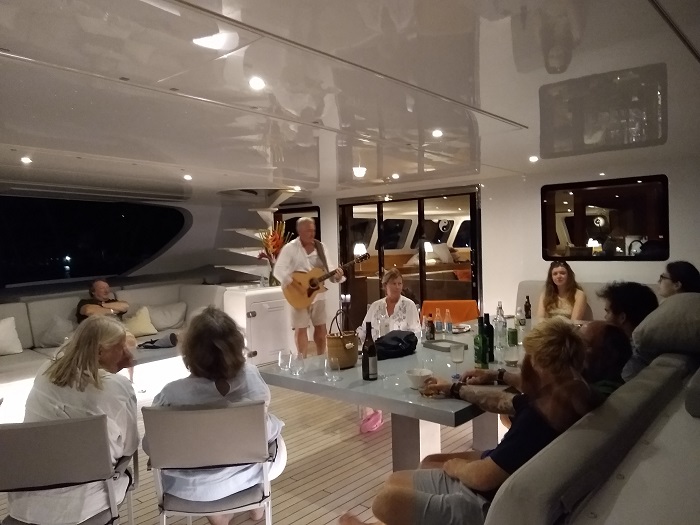 Other “local color” includes a little bird that visits us most days for a snack of banana.  Brenda tells me he/she is a Lesser Antillean Bull Finch. 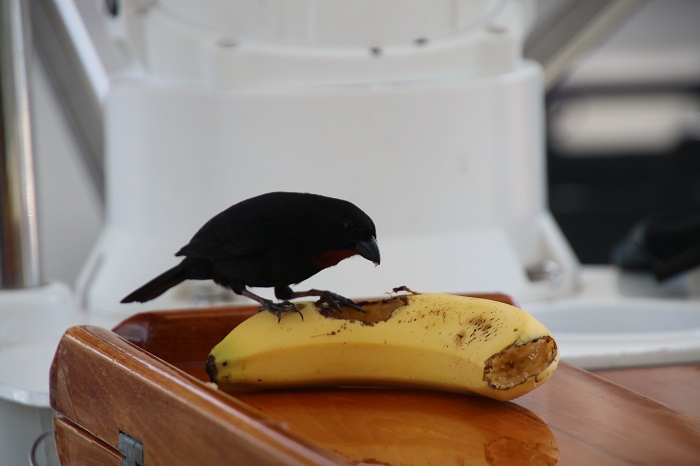 Just to prove that the visitor is really aboard Pandora with our dink “HOPE” in the background, a sort of “proof of life” shot. 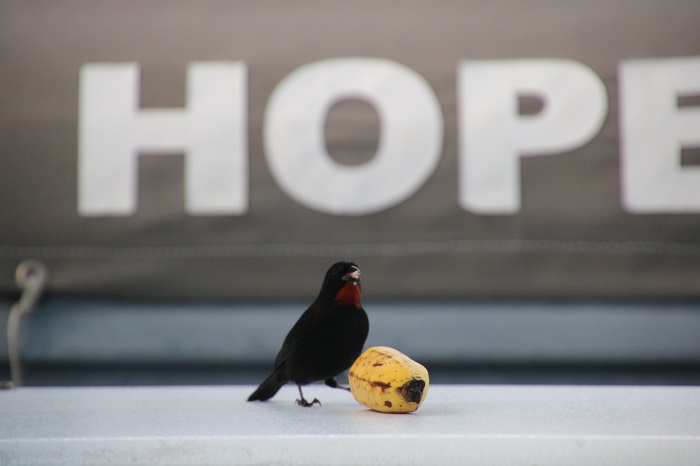 No wait, this is even better.  He made himself at home in our cabin.  Brenda wasn’t happy about that.  Alas, gone pre-poop.   GO AWAY! This is just so BULLFINCH. 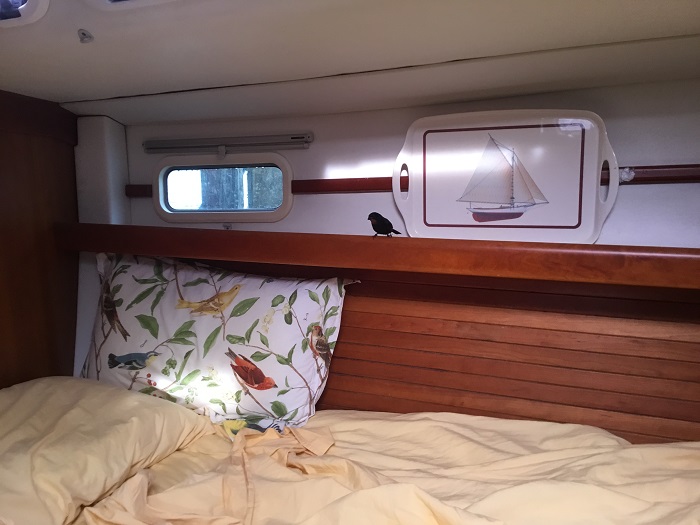 The harbor is a very popular spot for party boats to tour.  They come in with music blaring and well lubricated passengers.  I wonder if they have enough life jackets aboard.  Hmm… 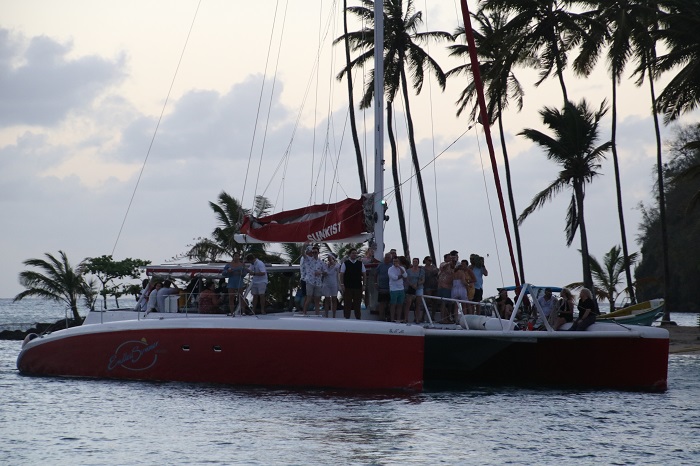 In the interest of full reporting, chill though I may be, life aboard Pandora here isn’t without it’s mishaps.  The most recent “insult” was compliments of some sloppy docking by a 40′ Sunsail charter boat that tied up near us for one night.  He did a pretty good job of coming in but his inexperience showed when he left and clipped one of my stanchions with his grill.    Fortunately, the damage was limited to the single one.  I was able to bend it, sort of, back in place but it’s clear I’ll need to source a new one when I get home as the top is a full 2″ out of plumb.  And, it should be fun to find a part that was sourced in Finland in 2006 or so.

I have the contact info from the skipper, from the UK who says he will pay for a new one.   I know what you are thinking.  “Good luck with that Bob!”   Yup, we will see how that goes.  At least he didn’t scratch the paint.  No wait, that’s already been done by someone else.    Oh, the bliss of the cruising life and yet another reason to love the charter set.   At least we aren’t in the BVI where they are EVERYWHERE! 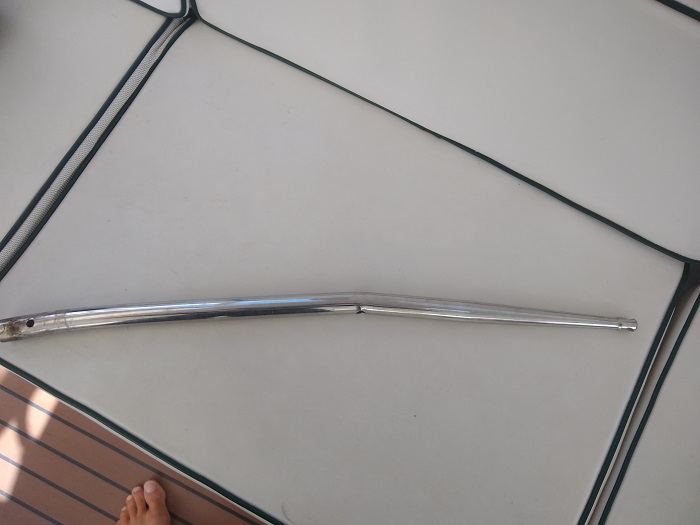 When I return home I will only be there for about three weeks before I head back to Antigua with my friend Craig.  We will spend about ten days working our way north to the USVI and then will join the Salty Dawg Homeward Bound rally to the US and make landfall in VA where she will receive her lithium battery., house bank, upgrade.

I have mentioned in past posts that one of her three fuel tanks has a leak so I will be down about 1/3 of her fuel for the run home.  With that in mind, I am considering purchasing a collapsible fuel bladder that holds 52 gallons.   This will more than make up for the missing fuel from the leaking tank and when empty, it rolls up into a small package.  It isn’t cheap but being able to avoid another half dozen yellow 5 gallon jugs that sit in the locker empty much of the time, taking up lots of space, is very appealing.

Additionally, once I have that leaking tank back in service again, the bladder will give me additional capacity to make long runs without worrying so much about running out of fuel.   It is larger than it looks but full of fuel it will fit it into one of my vented cockpit lockers.  I can also strap it on the deck under the dink if I choose.   I was told about the use of bladders by the captain of a megayacht who told me that big yachts use this approach to carry more fuel when they have to make long runs that go beyond their fuel limit.

One issue, if I put it in the cockpit locker, is how I will transfer the fuel, up hill, into my fuel tanks.  If it’s on deck, gravity will do the trick but below I will need a pump.  After checking a number of sources, this lithium powered pump seems like a good option.  It’s not very expensive, pumps 15 gallons a minute and the battery will last about a half hour between charges.   I am also going to look into a 110v option as that might make the most sense so I won’t have to worry about recharging or the battery going flat between uses. 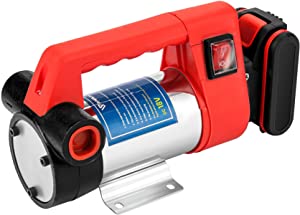 I always worry about running out of fuel on a l0ng run as it seems that the wind is often light and from an unfavorable direction.   With 25% more fuel I can, in theory, run the engine faster and still have enough fuel to get there in less time.

And finally, in keeping with my “hey, join us for some fun” attitude, I have organized a happy hour at one of the local watering holes for tonight and invited everyone in the marina, cruisers and the crews of some mega-yachts to join us.

It will be fun with a nice mix of folks to meet.   I guess that’s all for now.  So, as our season cruising in the Caribbean moves to a close, coming to you from St Lucia, just chillin.

One response to “Chillin in Marigot Bay, St Lucia”