Enjoying St Augustine and getting around town.

It’s Tuesday morning and the sun is just beginning to peak up above the horizon with a soft light here in St Augustine.  Today, for the first time in quite a while, the morning air smells somehow buoyant and tropical. 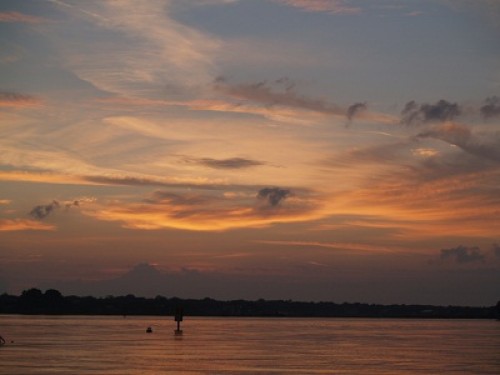 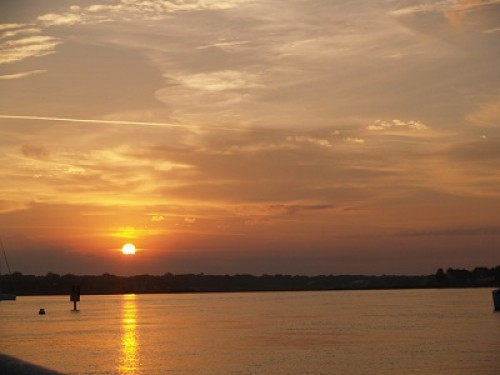 Perhaps it’s just low tide but I think that there is something more, not the least of which is that it’s only 59 degrees and not in the 40s, and sometimes 30s, as has been the case over the last few weeks.    The only sound is our generator rumbling away on deck and that’s certainly enough to disturb the silence.  However, a cold shower for Brenda later would be more disturbing, that’s for sure.  There always needs to be hot water for showers.

Speaking of energy production, I have noticed that while our solar panels provide for plenty charging in the summer, the days are just too short and sun too low in the sky to fully recharge the batteries on their own.   The electricity used by our diesel heater also adds to the electrical drain more than usual.  Yes, it’s gotten quite a workout over the last month or so.

St Augustine, the oldest city in America, is a magical place and the Christmas lights, and let me tell you that they are amazing, are among the best in the world. That distinction comes from none other than the National Geographic Magazine.   Brenda’s blog post a few days ago talked about that in particular.

Yesterday we decided to go for a walk to explore the city.  The down town area is  certainly touristy but it’s done in a nice way.  There are narrow streets that are lined with shops and restaurants.  We enjoyed looking around for hours. 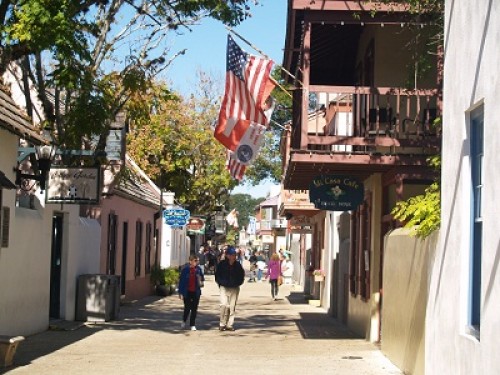 Henry Flagler, a founder of Standard Oil, arguably the guy that had more to do with the popularization of Florida as a destination than anyone, had a big impact here, building some of the grandest buildings in the city.  Many are well preserved under the guidance of his namesake, Flagler College. 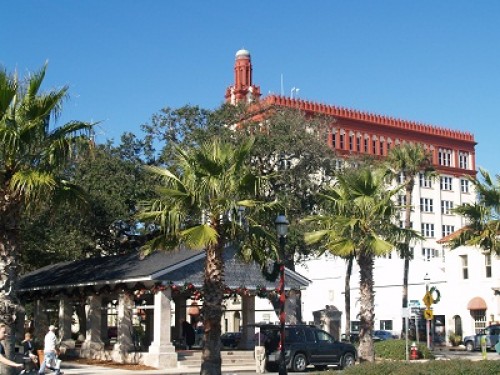 His buildings are quite distinctive and give the downtown area much of it’s character.  This building is open to tours even though it’s part of the college.  I expect that we will visit here today. 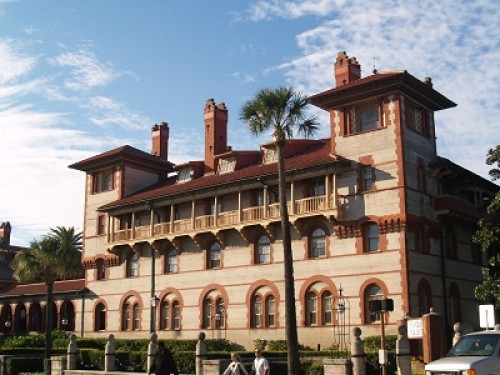 While not lit, you can get a feel for the holiday lights from this gazebo down in the town green near the waterfront.  I am getting used to the look of decorations and palms. 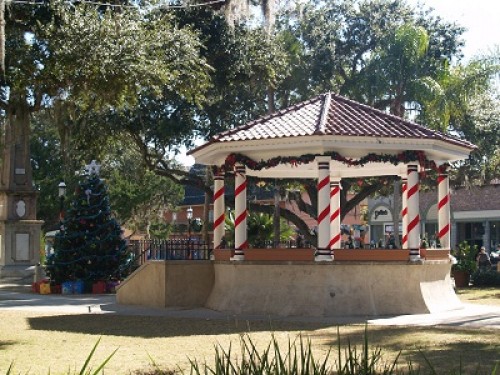 We also visited the fort, the oldest in America and the only one that was never breached.  It was built by Spain in the 1500s. It’s pretty impressive. 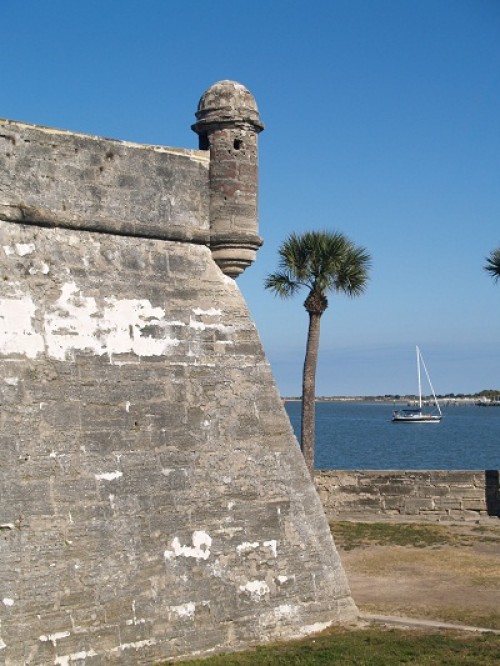 Inside the courtyard you can get a feel for how those manning the fort lived.  Not well, I would guess.  Imagine this place in the heat of summer. “Listen mate, it’s so %$#&*%$ hot here in the courtyard, I am going to go up on the battlement to catch some air.  Gee, I hope I see a pirate!  That would be just so cool(ing).” 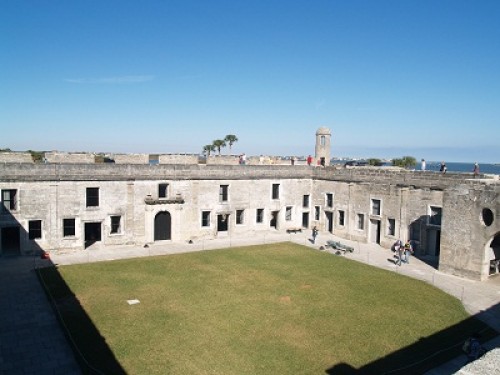 However, hot or not, the view is pretty dramatic.  I doubt that the bad guys, whomever they might have been at any given moment in time, would have had a tough time getting past this fort. 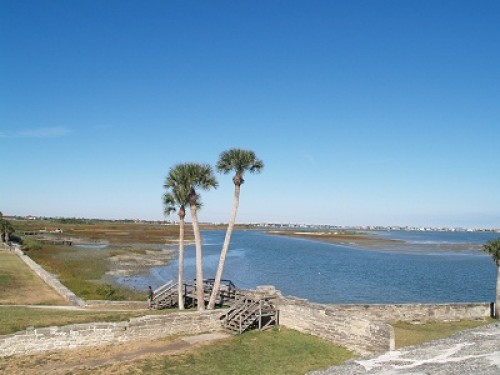 When the locals weren’t building forts, they spent plenty of time building churches, and there are some really nice ones here.  Not a lot of wood construction, mostly whitewashed masonry. 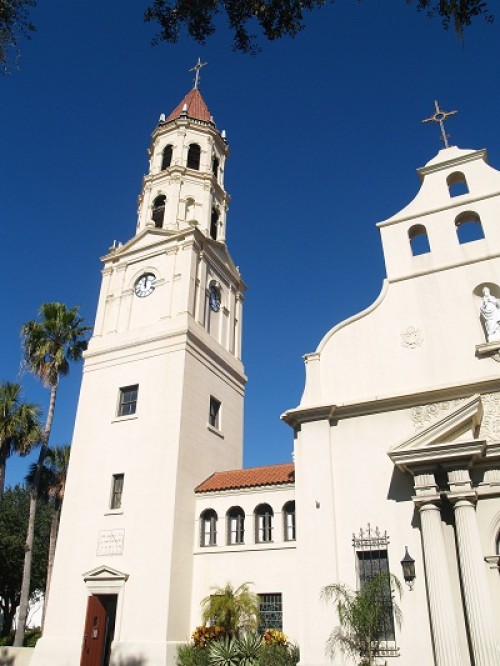 Just in case you might be lulled into believing that everything about Christmas in St Augustine is in good taste, I’ll burst your bubble by inserting this lovely shot of Santa’s favorite compliments of the local miniature golf course.  He seems to be looking at something and pondering something.  As Satchel Paige once said, “sometimes I sits and thinks and sometimes I just sits”.  This course is billed as the oldest in Florida.  I wonder how they stack up against the other courses outside of Florida?  Hmm… 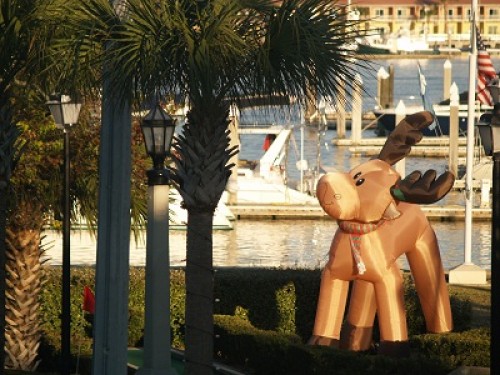 We spied this little guy on the dock as we were headed back to Pandora. 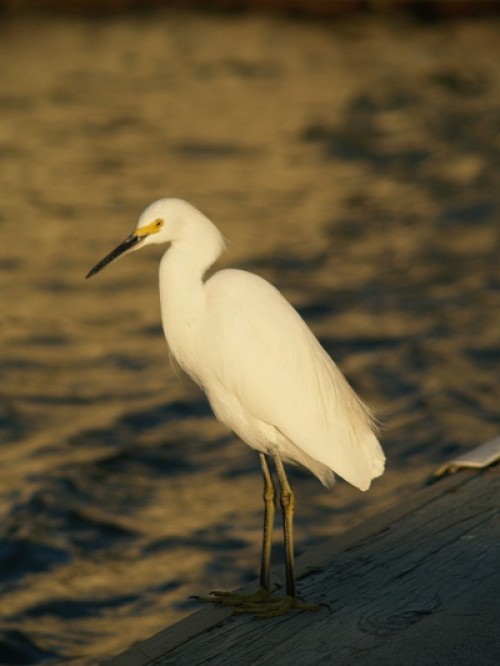 We were also treated to a lovely view of the Bridge of Lions, one of the nicest bridges we have seen on our trip.   Built in the 1920s and recently restored, it was purported to cost some 10x more than most bridges of it’s type when it was built.  Roads and Bridges magazine voted it one of the nation’s top ten bridges in 2010.  Yes, indeed, there is a magazine for everything.  If you are curious about who else won the competition, you can see the list here.  I’ll bet that my dad will click on this link as he loves bridges.   Never the less, what terrific evening light. 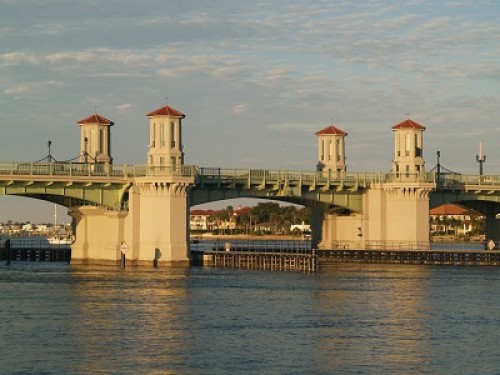 We capped off the day with a nice phone call to my parents while all on the call enjoyed a glass of wine.  After the call Brenda and I had a terrific dinner of beef fillets wrapped in bacon with grilled onions and peppers, nicely done on the grill.   All and all, a very nice day. 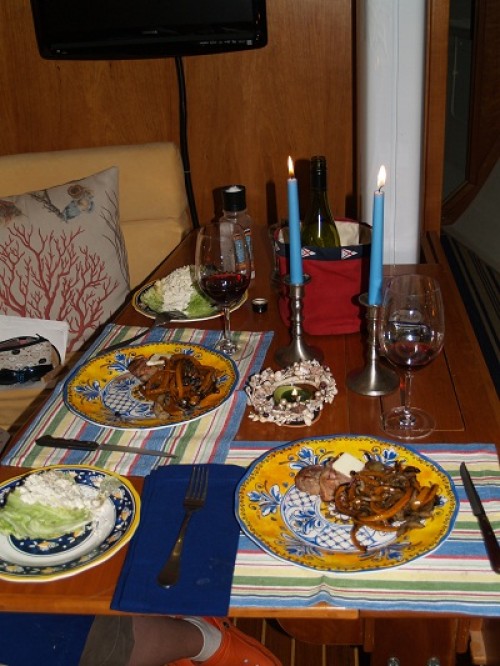