Beginning when I was about half way through my run south to Antigua in November, I confidently stated that I was leaving Pandora in Trinidad this summer, talking a year off from the north-south tedium each spring and fall.

I went on then and a number of times since, about the reasons, kitchen remodeling, wear and tear on me and Pandora, simplicity of getting on a plane to get home, plans to travel in the UK this fall, and on and on.

Over the last few months Brenda and I have tried hard to come to grips with the details of taking Pandora to Trinidad, identifying ways to get clothing and gear home and back again in the fall, insurance, lining up tradesman to work on the boat and such.  After trying to get everything in place we rather abruptly decided to just bag it and take Pandora home once more.

Oddly, I have not been able to find a reasonable cost insurance option even though Pandora would be below the hurricane belt for the summer and out of the water.  In spite of this, the cost of insuring her for this period was going to be considerably more than taking her north.  It doesn’t make sense to me but the cost of insurance has gone up a lot as a result of the last few years with major hurricane losses.

I also do a good amount of the work on Pandora myself and to hire all of it out was really going to add up and it was beginning to look like it was going to cost me upwards of twice what I would pay to make the run home and back and that was before having paint work done, the major reason to have her there in the first place.

Perhaps the biggest factor in deciding came up rather abruptly last week when I learned that a friend of mine had started a company to import lithium batteries from China.  I have confidence in him given his technical engineering background along with the fact that the OEM manufacturer, is also a major supplier to BMW and their EV efforts.

I really need to replace Pandora’s battery bank and I hate to just go with lead acid again as I have heard from other cruisers that lithium is just so superior, with substantially faster charging rates and tremendous weight savings, more than 500lbs.

There will also be a number of changes required in my charging system to accommodate the upgrade but, with his help, I expect that I will be able to get it done.  A possible wrinkle will be that some insurance companies will not cover boats with lithium house banks, due to a history of fires from earlier battery designs.  I am told that the chemistry of this generation of batteries today do not have the risks of older designs.   I guess we will have to see what the insurance options are.   Fingers crossed.

I really don’t want to have to do so much of the work on Pandora myself this summer with other things on tap at our “land home” but that’s what we are heading for.

The plan will likely be for Brenda to fly out of St Lucia and back to the US around the 8th of April.   My friend Craig will fly down to spend some time working our way to the USVI and on to the US, in early May.   Details to come…

So, for now, we are here in Martinique, currently anchored in this lovely cove, Grand-Anse,  enjoying the laid back pace with beach bars and a nice long sandy beach. 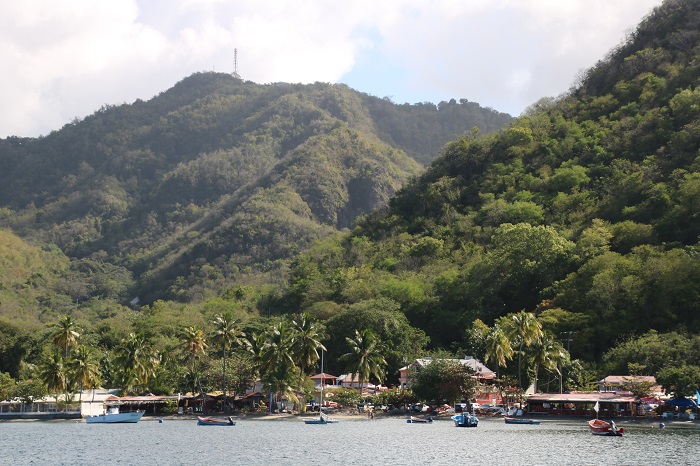 Our time in Fort de France was punctuated by constant rolling by passing ferries so it’s nice to be away from that.

The beach is lined with small shops and bars with a nicely maintained promenade. 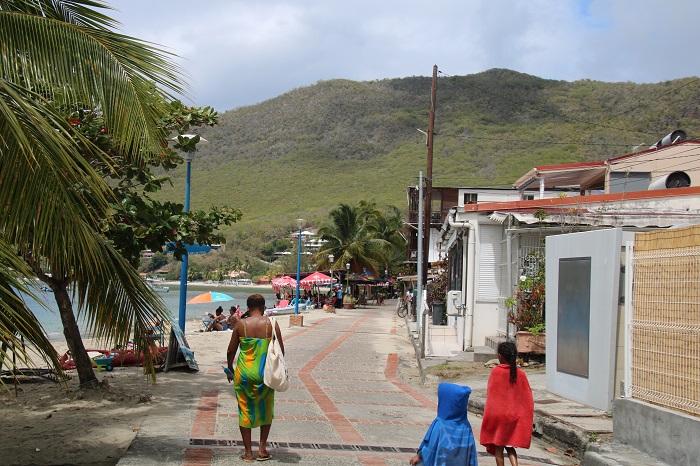 A particular highlight of this area is that there are loads of turtles.  Yesterday I was swimming under Pandora and saw one, perhaps 20′ in diameter, munching away on grass under the boat in about 15′ of water.  I swam down and was able to touch, more like pet him on his/her shell.  He didn’t seem to be particularly alarmed by my attention and slowly swam away.    It was quite thrilling, I’ll admit.

For those who don’t want to get their feet wet and still enjoy the turtles, this crazy looking boat makes it’s way slowly around the harbor multiple times a day.  I have no idea if this is a one-of-a-kind glass bottom boat it’s the only one we have seen.  It was in a nearby harbor in 2018 when we were last in the area.  I havent’ been able to find a reference online to this design or where they are made. 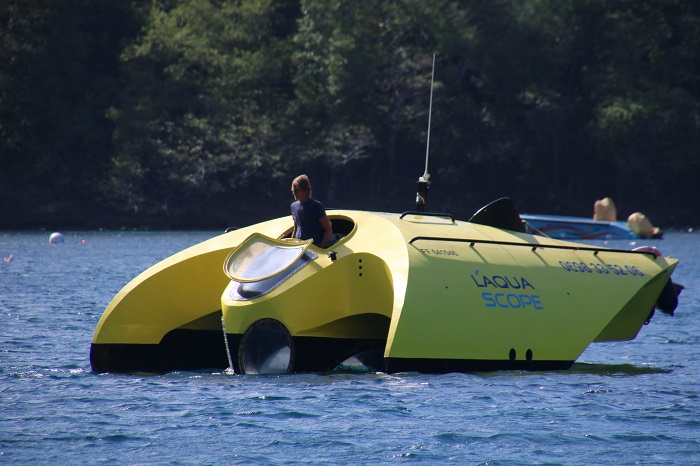 There are also a number of pretty amazing boats here, including two restored French fishing boats.  Biche, is the last surviving traditional tuna boat.  She was brought back from an abandoned hulk a number of years ago when she was restored in France.  She’s quite impressive with her unusual yawl rig. 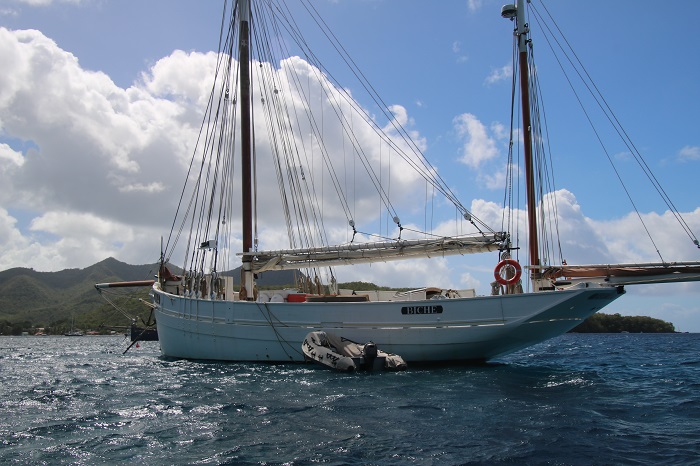 We had seen her sailing in Les Saintes a few weeks ago. 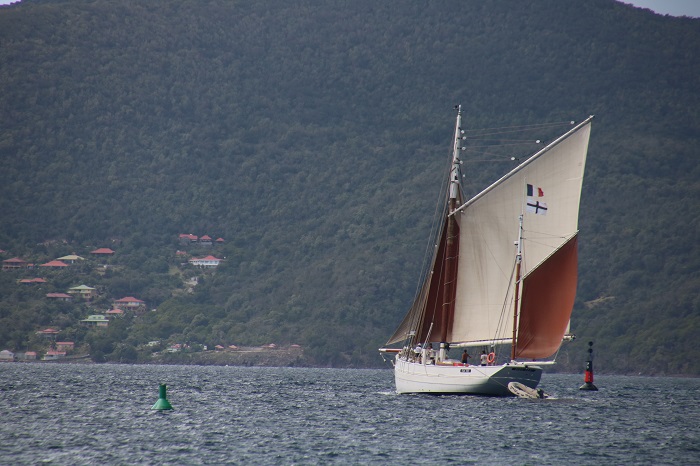 She is accompanied by a smaller and not quite as well maintained cousin, on a nearby mooring. 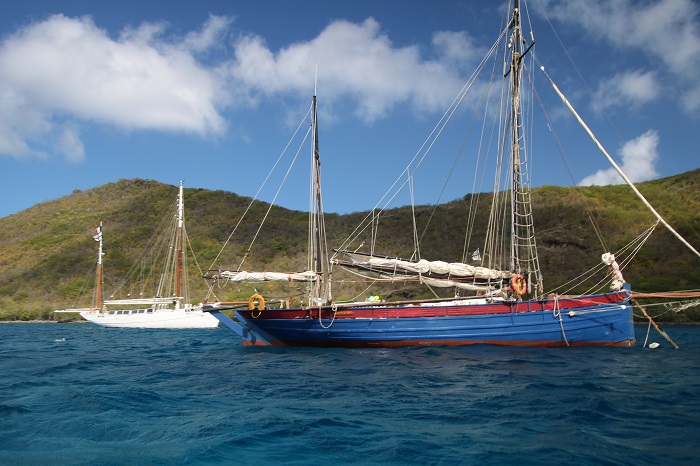 Of course, Pandora looks ok herself, framed by trees on the beach. 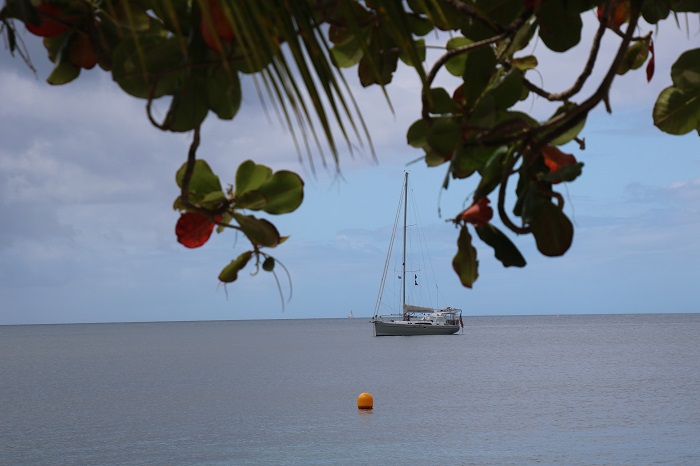 There are a lot of folks snorkeling in the bay with dive boats heading out multiple times a day.  Some are heading far afield with others just bringing folks to nearby rocky beaches.  Yesterday, when I was talking photos of those two classics, I saw a group on the beach nearby, waving wildly to a dive boat and.  A short time later a rescue chopper appeared. 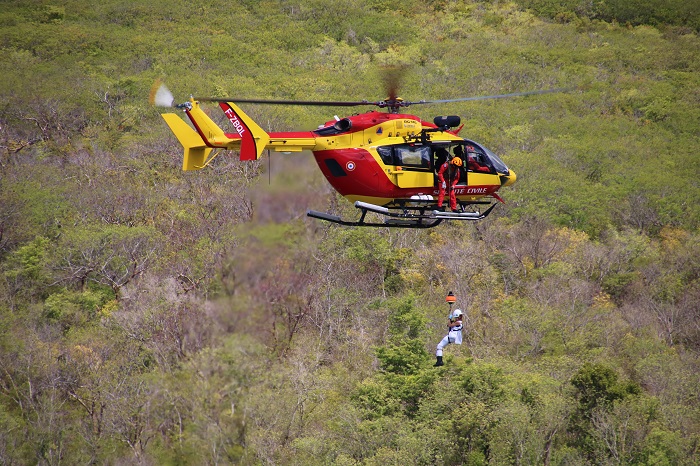 They hovered over the beach and dropped two EMTs while an inflatable launch ran up on the beach at high speed, delivering a patient. 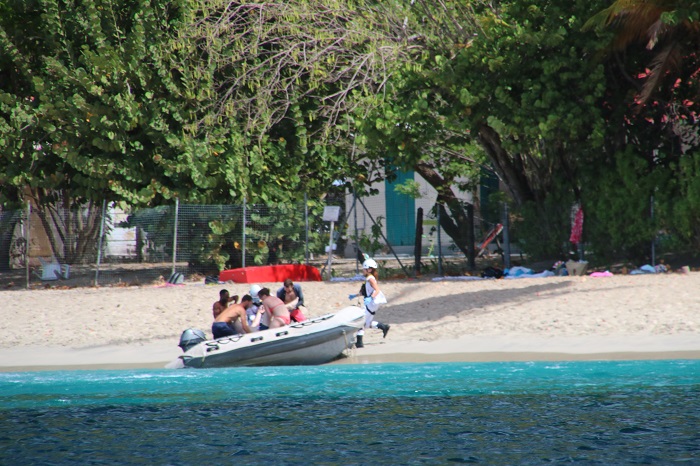 The chopper continued to circle around the area, kicking up sand and spray before landing in a nearby field. 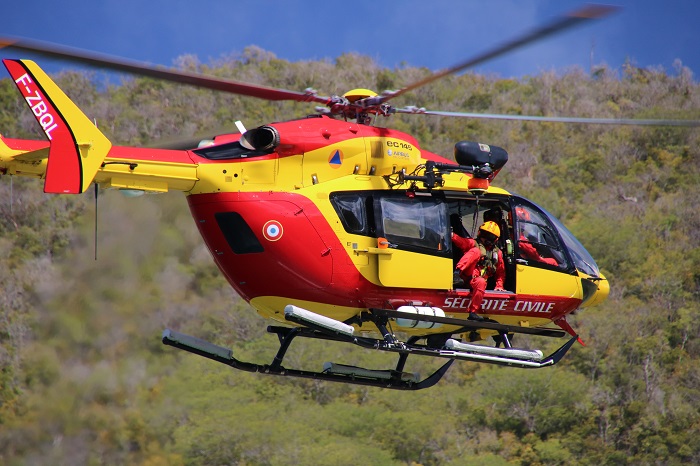 The took the stricken swimmer up under some trees and for what seemed like way too long, they worked aggressively to revive him with a series of techs applying CPR. 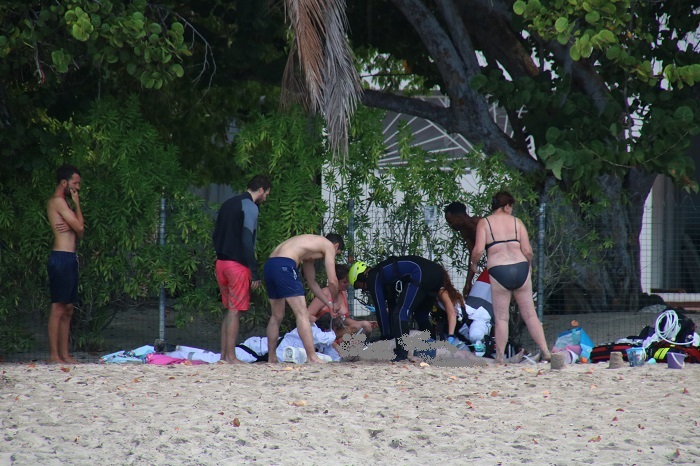 Eventually, an ambulance arrived but there didn’t seem to be any urgency at that point to transport the patient to the hospital.  I am guessing that the outcome wasn’t good.

I often wonder, especially when we are far out to sea on passage, what would happen if one of our crew fell ill.  The prognosis would likely be bleak.

Anyway, the experience of watching the whole episode unfold was sobering and reminds us how fragile life can be.

So, here we are taking it easy aboard Pandora today.  Brenda is hoping to participate in an online webinar by a weaver in Scotland this afternoon and I guess I’ll spend some time “turtling”.

So there you have it, another day, another plan.   So, what’s the plan?  For now I’m positive, sure?, fairly certain?, perhaps? that I am taking Pandora back to the US.

2 responses to “Change of plans?”