So, Bob, how was your trip to Antigua?

Well, it’s done.  Pandora is now in Antigua and Brenda and I are back home for the holidays.

Our plan is to rejoin Pandora in late December so we can enjoy New Year’s Eve in Antigua along with some terrific French dining while watching the fireworks over the fort in English harbor.

If you think of fireworks as something that only happens for the 4th of July, think again. You have not experienced anything like watching a scene like this while sitting on the deck of your boat sipping a rum punch.   Incomparable… 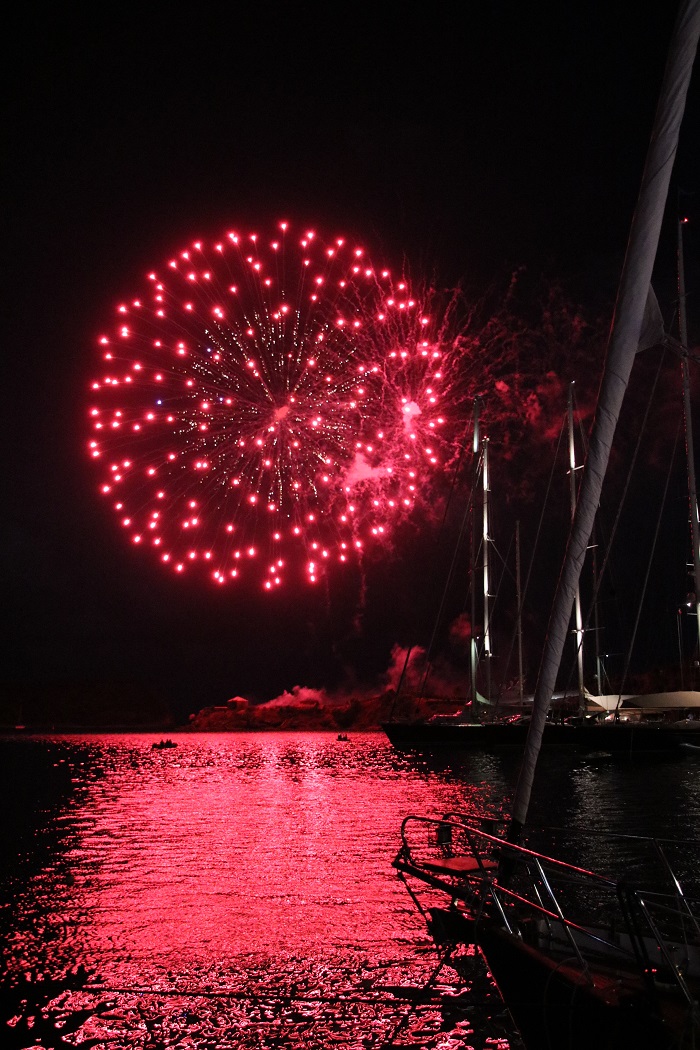 So we are in CT, Pandora is in Antigua and my run south is becoming a distanc memory.  All and all, the run was fairly easy but the fleet was frustrated by a lack of wind and when the wind gets light, I crank up the engine.  This year that meant we motored more than 150 hours over the 1,500 mile, 12 day run.  To give some scale to the time we listened to the drone of the engine, think about turning on the engine on say, Sunday and then turning it off  the following weekend.

That’s a lot of motoring.   I always find it amazing that a machine/engine, can operate for that long without something going badly, another reason that I have a mechanic go over the engine every year before we head offshore.   The idea of finding myself powerless, hundreds of miles from land, with no wind in the forecast makes me sweat.

If you follow this blog you already know much of this as I published nearly every day, during the run, sending the text of the post to Brenda via the Iridium Go network.  I will say, that while the Iridium and Predict Wind systems are a fairly expensive system to set up and use, it’s an awesome way to get weather information each day and to stay in touch with family along the way.   Being able to call Brenda every day during the trip was a real treat and something that I will not want to give up any time soon.

Being unable to hear her voice for the nearly two weeks that it takes to make the run has always been tough for me so those talks, as brief as they were, made being away from her more tolerable.   And, I know of such things after nearly a decade making the north and south run most every year.

Anyway, the question I always get when I talk with friends following a long run is “So, Bob, how was your trip?”, so I thought that I’d try to answer that in this post.

All and all, the trip was fine if a bit too long.  At twelve days, it was the longest by a few days but because we had to motor so much, it seemed like a LOT longer than that.

If the truth is to be told. about half way through the run I began to think that it might be best to leave Pandora south next summer, likely in Trinidad, instead of yet another long run north.  Fast forward to now and that’s the plan.   I think that it’s time to take a break from the three weeks in the fall and again in the spring that I spend moving Pandora thousands of miles.  It’s going to be tough to have her in Trinidad for months, while I am home in CT, so we will have to see how it goes.

One of the features of Pandora that makes her sail well, when the engine isn’t droning away, is that her engine is located below the galley, in the center of the boat.  This keeps weight low and away from the ends of the boat.  That’s good from a design standpoint, but the negative is that the heat of the engine running is inside the boat which means that a lot of heat is released into the cabin, even for hours after the engine is shut off.  And, as we can’t open up any hatches when underway to keep the errant wave out, all that heat is kept inside the boat which can make things pretty uncomfortable.

And, as we get farther and farther south, it gets hotter and hotter to a point when it sometimes feels unbearable.  “Are we there yet?”  Additionally, even if we have good wind and are sailing a lot, I still have to run the engine at least once a day to keep the batteries charged as the solar just can’t keep up with the load of the instruments and autopilot running round the clock and that means more heat.

All this means that it is nearly always hot down below when on passage.  I can, when conditions are very calm and we are under power, run the AC.  As we have a powerful alternator on the engine, linked to a power-takeoff, the engine can handle the load of the AC.  The alternator is a big one, rated 14oA at 24 volts.

However, when there is wind, Pandora sails really well.  During the half of the trip when there was wind, I thought it would be fun to document what it is like to be under sail in arguably sporty conditions, hundreds of miles from shore.   Aboard with me were Peter, at the helm and George, taking a siesta off camera.

Notice how much noise there was as we plowed into the wind driven chop.   As a rule, boat speeds are less offshore than in coastal cruising as waves tend to be a lot larger.  In this case, there was a powerful gale hundreds of miles to the north of us and that northerly swell combined with a wind driven chop that made for some bumpy sailing that slowed us down a bit.  In spite of that we still pounded along at around 7kts, good progress by any measure, thanks to our long waterline, plumb bow and fairly fine entry.

Rodger Martin, the designer of Pandora, an Aerodyne 47, penned a very good boat, well suited to ocean passage making.   Sadly, there were only three built.

This short clip was shot during a squall that increased the wind by about 10kts.  Normally, I would have put in a second reef, to reduce sail and the load on the boat.  However, the stronger winds didn’t last all that long.

We were fairly hard on the wind and the apparent wind peaked at 30kts, a bit much for my taste.  Pandora romped along, never the less.   Note the inner rod rigging to port, it’s normally drum tight and with all the load on the rig, it was wobbling slightly.   We run into squalls a lot on passage but fortunately, they are not as violent as those we encounter during the summer in New England, where wind speeds can easily reach storm force, if only for a short time.

Down below Pandora is always pretty well trashed on passage with the cushions covered by canvas covers to protect the interior from the inevitable salt that finds it’s way down below.  The footage doesn’t really show clearly how much we were heeled. but note the angle of the gimballed stove and the water rushing by the porthole above the seats on the port side.  In spite of the conditions, Peter, sitting behind the helm, looked comfortable.  Note that we have a full enclosure, to keep the salt spray out.  Before Peter agreed to do the trip he asked about the enclosure.  “don’t get my wet!”.   Been there, done that and he’s not going to do it again.   Bashing along in wind and rain while getting soaked can really get old and the older we get…

The covers on the cushions helped a lot so when we arrived in Antigua, it was a lot easier to just hose off the canvas covers than to attempt to clean salty cushions.

Again, as it is on deck, the boat is very noisy when we are crashing along.    So much for keeping things neat and tidy.  When we are preparing for a passage of more than 3-4 days, we have to be ready for conditions that range from flat calm to gales as you just can’t get forecasts that are accurate for more than hand full of days.

As you can imagine, with that sort of uncertainty, keeping up on what sort of weather is heading your way is a near full time job so I watch closely to the twice a day forecast both through Predict Wind and our weather router, Chris Parker of Marine Weather Center.

The trip s0uth this fall was the first time I had used Predict Wind and I have to say that it was pretty neat.  Check out this video that describes the service.As neat as the graphics are and the ease of downloading them via the Iridium satellite system, it’s pretty clear to me that a combination of this service and a weather router like Chris Parker makes the most sense.   As good as Predict Wind is, you really need a live person interpreting the long range forecasts as computer generated models can only really go out a few days and beyond that models are just not accurate enough to trust.

So, here I am at home in CT, with the holidays upon us.  I am excited about spending time with family, especially our grandkids, but heading back to Antigua is high on my list.

There are still plenty of uncertainties about how the season will unfold as COVID is still a threat everywhere.  However, I have to say that the prospect of being outdoors all winter, with balmy trade winds blowing, sounds a lot more appealing, and safer, than being cooped up with snow blowing around outside.

So, how was my trip to Antigua?   It was annoyingly long but now that Pandora is there, I am excited to rejoin her as the winter promises to be warm days and steady breezes, something to look forward to.

Did mention that it’s warm in Antigua, even in the winter?  Thought so…

2 responses to “So, Bob, how was your trip to Antigua?”