Well, it looks like we will be heading out on Saturday evening to begin our run to Antigua.

As of last evening, Chris Parker, our weather router, said that the “window” for departing Hampton will be Saturday and Sunday, a shorter window than he saw even one day before.

As I write this it’s raining and very windy with totally nasty weather offshore.  However, as that system moves out conditions will substantially improve, for at least a few days before another front exits the East Coast, bringing with it gales yet again.  Such is late fall weather in the north Atlantic.

My crew for this run, Peter and George are coming in Saturday afternoon so as soon as they step aboard, we’re off and on our way.  I had hoped to spend the night and let them settle in before we headed out but there isn’t time so we’re leaving.  Sorry guys.

The goal is to get as far south as possible by later in the week when all this nasty weather repeats itself near the coast.

In past years, we have been plagued by persistent SE winds onthis run and that made for a frustrating trip but this year is looking like it’s going to be mostly light air and wind behind the beam.  If anything, we are unlikely to have enough wind and Chris feels that we may have to motor for half the trip.

With that in mind, we will have to manage our fuel until we hit the easterly trade winds as we get closer to Antigua.  Motoring a lot on this run is nothing new as I usually put about 100 hours on the engine when I head south.

I won’t go into lots of explanation on the whole fuel management issue as there will be time for that later in the trip.

As in the past, I plan on writing posts as often as I can, every day perhaps, and I may even be able to send a small photo now and again.  The new Iridium satellite unit we have is pretty neat and makes all this stuff much easier than in the past.  I’ll send the files to Brenda and she can put them up on this blog.  I always enjoy sharing our journey with everyone so stand by.

And, as in past years, every boat in the fleet, and there are nearly 80 boats, will show up on a tracking map, complete with wind information.  It’s pretty cool, actually.

Just follow this link to see where everyone is.   This screen shot from today shows just how nasty it is out there right now.  And yes, red isn’t good.  It means really windy.   You can see the fleet clustered in Hampton. 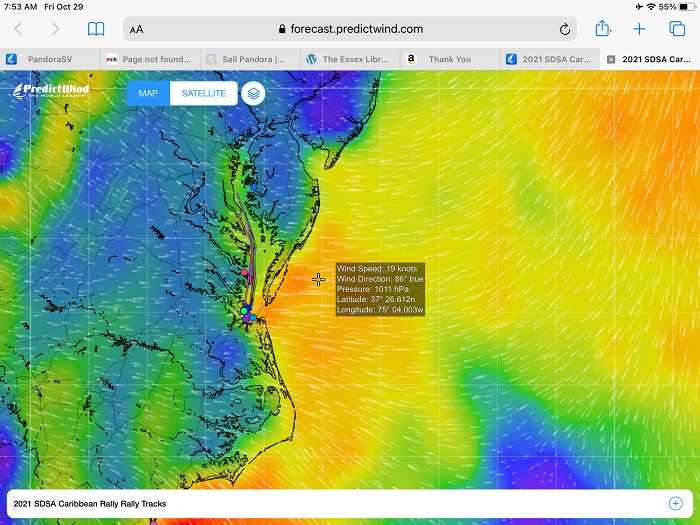 Beginning on Saturday you will see the boats move out and begin to head south.  The bulk of the fleet is heading to Antigua and some to the Bahamas.

Still lots of little things to get done before leaving but I’m on it.