It’s Thursday morning and the sun is back out after several days of rain. While the sun peaked out yesterday, it was only after a bout of heavy fog where I learned that cell coverage, or at least the ability to send data over the cell network was seriously degraded when the air is heavy.  In fact, while there is plenty of “bars” on my phone, uploading e-mail, and photos for this blog, is a annoying effort.  Alas, that’s why I have not had a post since last Saturday.  The further east we head, the worse the coverage.  However, lots of ground to cover and photos to share beginning with last weekend out at Frenchboro, one of the most remote offshore islands in Maine for their annual lobster festival.  Much has been made of the homesteading efforts to keep the island community alive on Frenchboro over the years and thanks to a thriving lobster fishery there, it’s working.  While the one room school house has about 20 students, I think, the island is still home to families that make this remote and often isolated island their home year round.

We have been visiting Frenchboro for many years and always enjoy the views of Mt Desert in the distance and the nice local folks.  In the past we have always rented a mooring in the harbor but this year we were told that there wasn’t any fee and to just pick up one.  It seems that there was some disagreement last summer as to who should be profiting from a rental venture.  Some said only the fire department and other public works should benefit, and with some perhaps wanting to handle it differently, it seems that moorings are free now.  So much for the common good and free commerce.  The good news is that there are plenty of moorings to use and this remains a great spot to visit.

In past visits, we have always marveled at how few people there were when we were ashore.  However, with  a well publicized lobster festival, this wasn’t a very isolated island at all for the day of the festival at least.  The Maine State Ferry system ran a special boat out and back to get folks to the festival.  And go they did.  What is normally a car ferry that runs once a week I think, was just jammed when it arrived on Saturday morning.  One trip out and one returning that same day.  What a sea of lobster killing humanity they were, streaming off of the ferry and on to the feast. 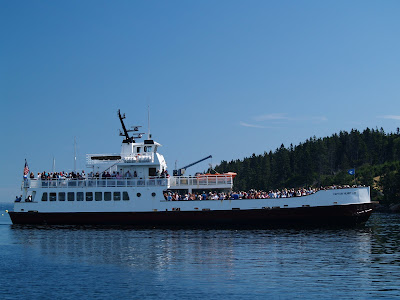 A closer look shows just how many were aboard.  I wonder where they got enough lifejackets for everyone. 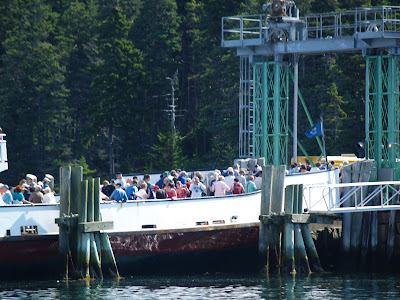 While normally a very sparsely populated island with about 60 year round residents, this weekend saw the population swell many fold.  Of course, the festival was held on the church lawn.  Many, many lobsters met their maker at this event. 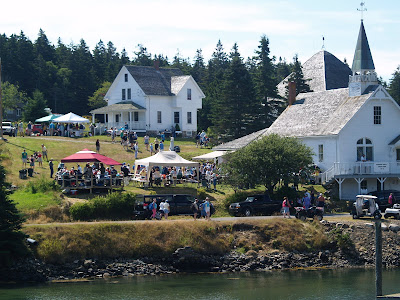 Even with modest rain this summer (I hear that the blueberry harvest is thin) the forest floor is covered with moss and very quiet.  You half expect to see little people running around.  No, I am not picking on those who are vertically challenged but we won’t get into that right now.  Nice moss… 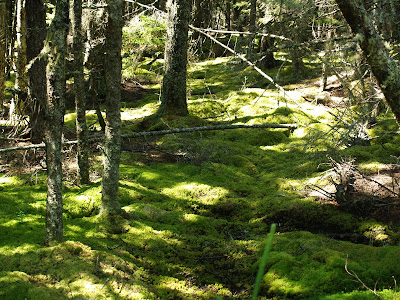 Along the way we spied this little guy.  He was most distressed with being disturbed by walkers going by and struck out at each one as the passed.  However, he didn’t want to give ground.  Pretty gutsy for a fella less than two feet long. 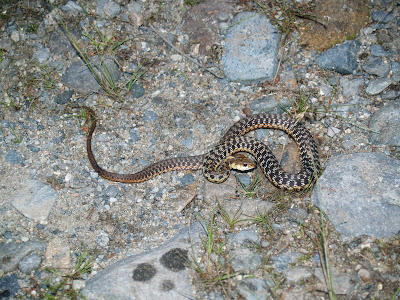 We headed out to the south side of the island to enjoy the view.  The granite here is quite pink.  As so much of this material was shipped to NYC over the years I am sure that some of the pink facades that you see around town came from this general area. 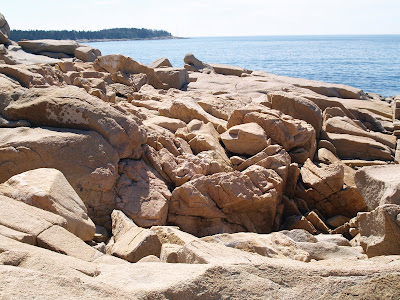 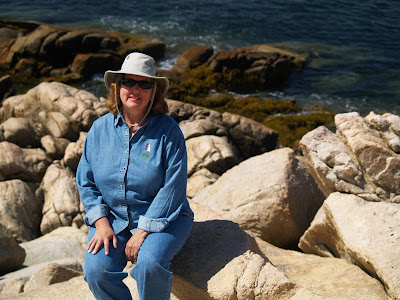 And, what a view it was.  Of the crashing waves. 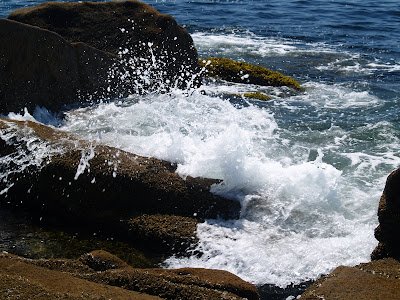 Of Acadia in the background where we were headed that afternoon. 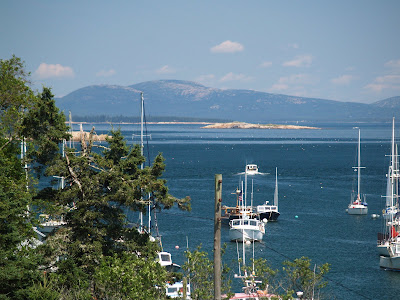 We enjoyed our sail after the festival as we made our way up to Acadia and Somesville at the head of the only fjord in North America, or is it the only one in the eastern half of North America?  Whatever!  It’s a fjord, of that I am confident and a beautiful one at that.
Well, it’s now Friday afternoon and based on the poor coverage I had to abandon my “office” and head to the library to finish this, along with the rest of my “pre-vacation work chores” before the end of the day.
We are now in North East Harbor where cell coverage is the worst of any populated harbor in Maine but that’s another story.  What a great spot!!!
I’ll try to post as service permits.  Lots more to talk about.
This entry was posted in Uncategorized. Bookmark the permalink.