Wow, we had a good time on the Down East Rally!

Well, it’s over.   After months of preparation and my moving from “sure, I’ll do the Down East Rally” to becoming Rally Director and all the details that that position suggests.  Months of preparation and endless discussions with local businesses as I tried to find a way to arrange events at a time when the virus was raging and nobody was comfortable in committing to anything.  When I was doing all of the planning, the vaccine wasn’t even available and every social interaction was viewed as far to risky to even consider.  In spite of my assurance to everyone that any plans we made were tentative it wasn’t until literally days into the rally, that many of the events finally came together.

For months I had worked closely with Ryan the harbor master in Rockland on the idea of applying to the Harbor Commission and City Council to consider our arrival in Rockland as an “event” verses a marina visit.  This seemingly minor distinction changed things a lot and allowed us to cram 22 boats on the city docks at a rate of approximately $100 per boat, regardless of size, for the full three days.  I doubt that the city had ever seen that many boats packed into one place and they were shocked when they realized that our average boat was nearly 50′ long.   As a result of our being able to be viewed as an “event” the rate to dock was reduced substantially from $2.50/ft/day to less than the cost of a mooring.

The view of the full docks was impressive and this view only captures about half of the fleet. 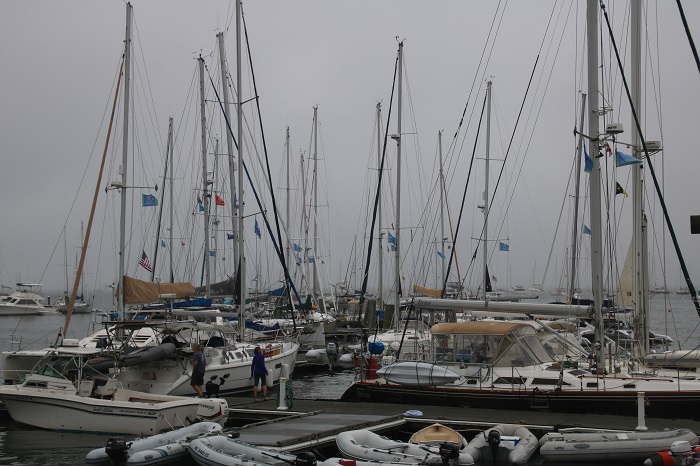 All of the captains and crew were thrilled as you can see from this group shot.  To see so many enjoying the result of the work that went into the rally by so many was very rewarding.  Note the couple on the far right, front row.  That’s Ruth and Herb of MV Ancient Mariners who visited us to join in the fun.    They were not a part of the rally but made a point of coming to Rockland to be with us. 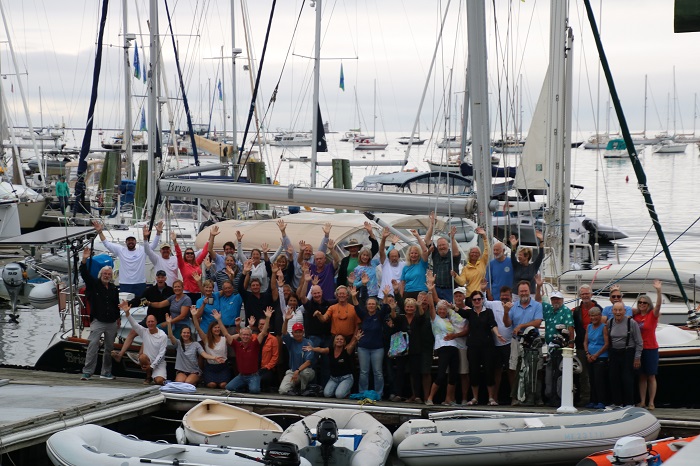 Here they are together on their boat aptly named Ancient Mariners.  Ruth is the “younger woman” at 95 and Herb is a very impressive 102.   To be out and about in Maine aboard their boat is a testament to the importance of staying active and I expect good genes helped as well.  Lucky them.

By the power (sort of) invested in me as a board member of SDSA and Rally Director, I gave them a rally flag and declared them “honorary Salty Dawgs”. 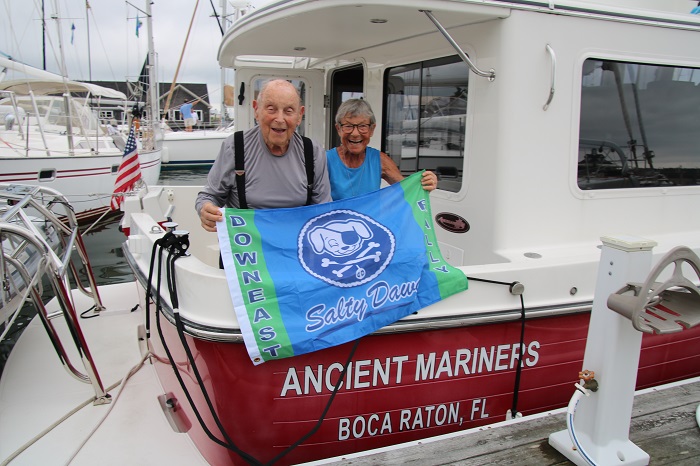 When my friend George of SV Peace and Plenty, and I were doing our events in Essex a few years back, Ruth and Herb, both VERY long term cruisers, showed up aboard their boat to the delight of everyone.  And here they are, years later, still going strong.

These days they keep their boat in Maine year round and winter at their home in Boca Raton, FL.  Good for them.  And good for us to have them with the fleet in Rockland where they had booked space for several weeks.  Craig and I had a lovely visit aboard their boat for a glass of wine.  Sadly, we had to cut our visit short as “duty called” and we had to rush off to yet another event.

After three days on the docks in Rockland and lots of fun, the fleet headed to nearby Pulpit Harbor, a favorite of mine.  It was nice to see the fleet filling the harbor.  At least a few of the locals, seeing their harbor jammed with boats, must have wondered who we were.    One of the other captains took this lovely shot of Pandora with the harbor’s namesake, the Pulpit, in the distance. 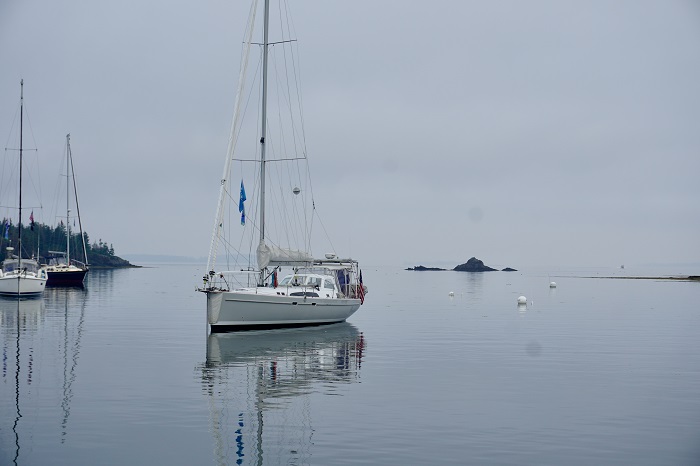 That evening one couple on the trip opened up their boat for a cocktail party.  No wonder cruising cats have become so popular.   Loads of room up on the bow. 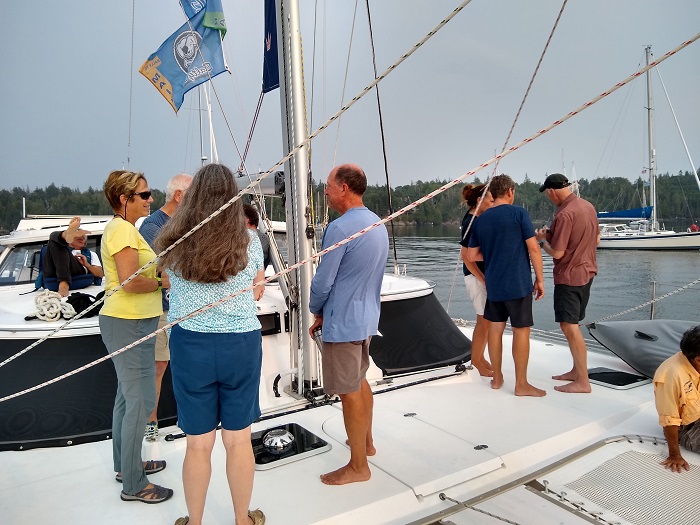 And in the cockpit.   I was told that there were 35 aboard.  And it wasn’t all that crowded. 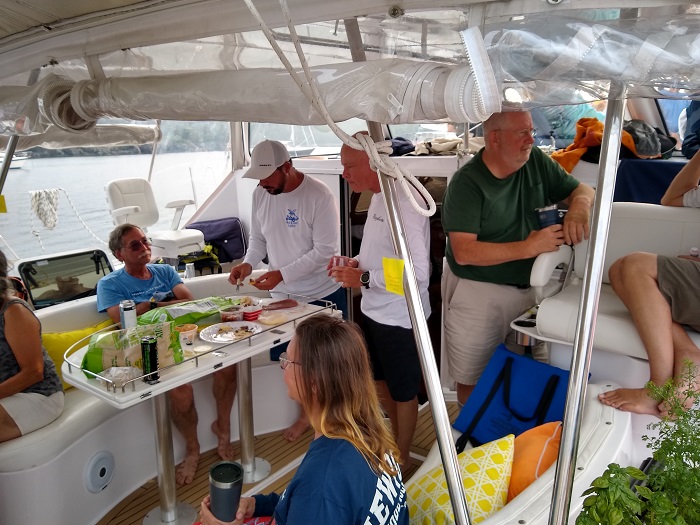 From there we headed to Buck’s Harbor and the marina run by John Buck (no relation) and his wife Jessica along with their three children.   John, it seems, purchased the marina so he could have his family in Maine for the summers.  In his “real life” he owns a successful medical supply company.  Nicely done John.

Their children seem to be pretty happy to be there with the older ones helping out in the marina and the youngest having a grand old time, repeatedly jumping into the water, unconcerned about the cold waters. 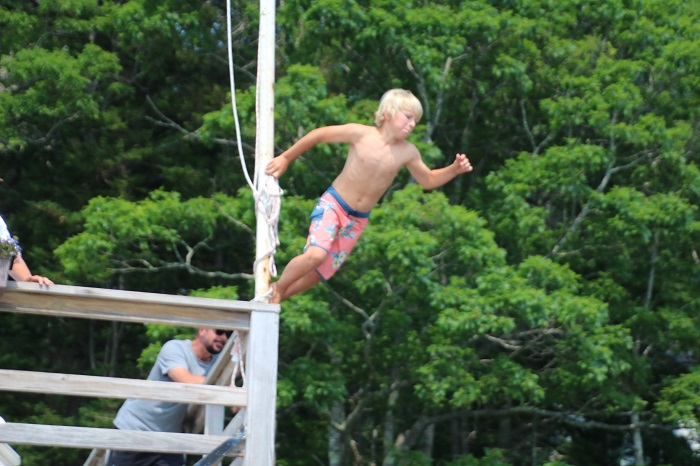 At the marina we had a “DYI lobster boil”.  John “boiled” and everyone brought along their own potatoes, corn and whatever else they wanted to include.

I had mentioned to the fleet that they should visit Hamilton Marine in Rockland and purchase bait bags to cook their potatoes and corn in.  I later learned that once the fleet descended on Hamilton the manager quickly set up a display of bibs, towels, crackers and of course bait bags.   It’s nice to know that the local merchants noticed an uptick in business with the Dawgs in town.

Lobsters are selling at an all time high this summer and yet, John offered them at a very reasonable price of $18 so everyone was able to get a generous 1.5lb lobster, cooked and ready to eat.   Interestingly, John carefully removed all of the rubber bands,  before cooking them, declaring that if you left them on they would leach into the water and give the lobsters a funny taste.   Also, he recommends steaming them but not submerging them into boiling water.  Who knew? 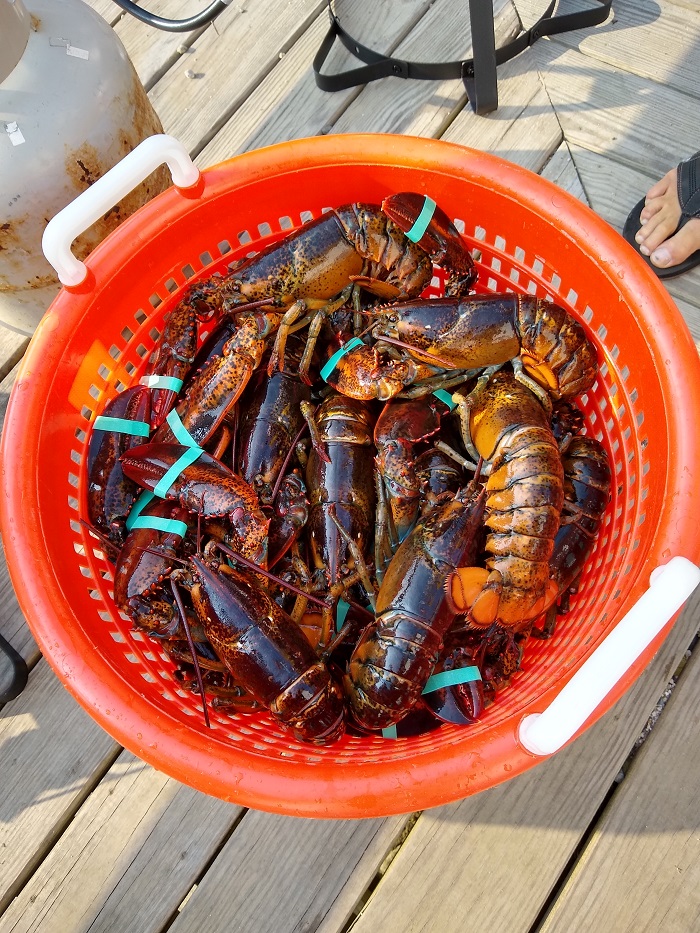 The group seemed to have a great time. 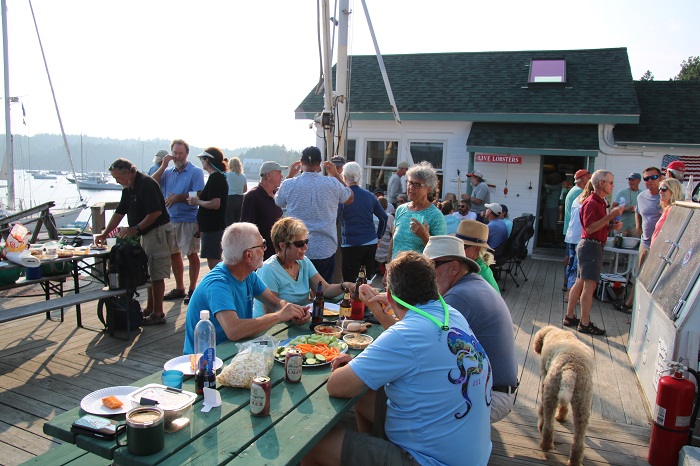 When the heavens opened up with a late evening cloudburst, everyone just strolled into the office until things let up. 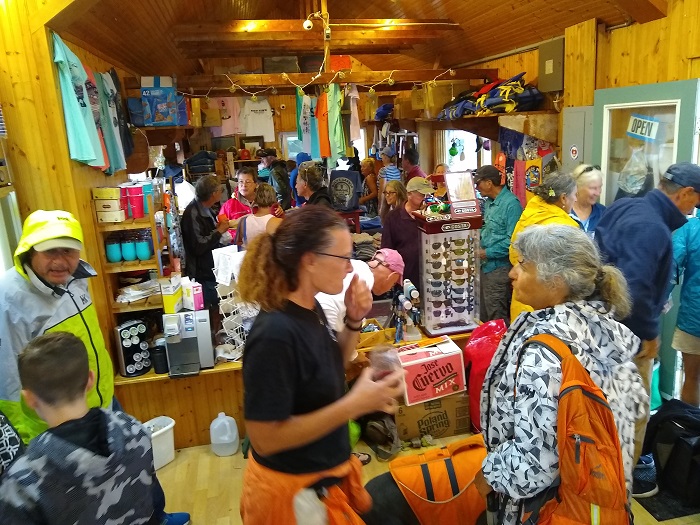 If you ever have an opportunity to visit Buck’s Harbor, do it.  It’s a wonderful spot.  However, be prepared to live a bit more “off the grid” as the cell reception is very weak.   Actually, that’s probably a good thing given our obsession with being connected all the time, present company included.  Oh yeah, they have outdoor showers.   I generally shower aboard Pandora but could not resist doing so in the great outdoors with a view of the harbor.    It was in the high 50s and I can say that the experience of being out in the chilly air and under a steaming shower was singular. 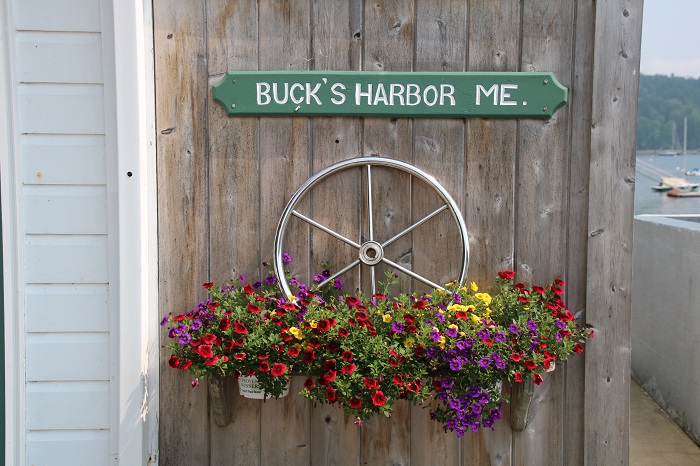 After Buck’s we all headed to Belfast for a final event, a tour of Front Street Shipyard followed by a happy hour on their deck overlooking the harbor.

The Shipyard is a very impressive spot and while there’s lots to tell, I think that I will stop here and reserve all that for my next post in a few days.  It’s sufficient to say that the Shipyard and all of the huge yachts that they service was an amazing spot.   Perhaps I’ll tease you with this.  They have a machine that using nothing but high pressure water, can cut through 9″ of stainless steel.

I saw that in action.  Amazing and that was only one stop along the way.

Being in Maine again was such a treat and I can’t wait to head back up with Brenda, Chris and Melody in a few weeks for some more cruising.

Wow, that’s about all I can say about the experience of being in Maine again and  it was great fun to do the rally with so many others that were as enthusiastic about being there as I was.   I can’t wait to go back.

With the Down East Rally history, I can now turn my attention to the Salty Dawg Rally to Antigua.   No rest for the weary…

One response to “Wow, we had a good time on the Down East Rally!”