Finally, back on the water but I’m a bit foggy.

I am back aboard Pandora for the first time this season, anchored in Newport RI and I’ll admit that I was quite confused when I woke up this morning, really early, as usual, and for a moment, wasn’t sure where I was.

Being confused about where I was shouldn’t come as a much of a surprise given how narrow our world has been for the last year, pandemic and all.   Sure, we Brenda and I, visited our son Rob and his family a few times but beyond them and our son Christopher and his partner Melody, who have been living with us since last September, our world has been quite small, mostly at home, dashing to the grocery for provisions.   Save our friend Craig, who’s with me in this trip, they were just about all the folks that we saw and

Now that we are all vaccinated and beginning to move about, it does feel a bit like we have been slowly emerging from a fog, which is exactly what greeted me when I woke up today.  A fog about where I was and a LOT of fog here in Newport Harbor. 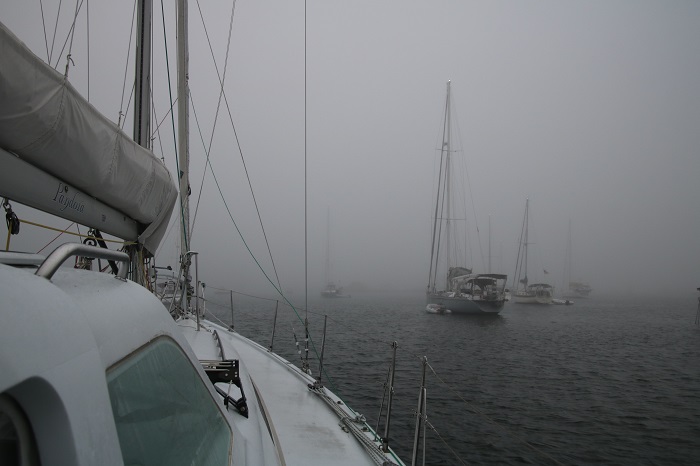 I guess there is a certain symmetry on a number of levels of things being foggy.  Fog in the harbor and fog about where I was, but I guess that I am going to have to get used to that.

Beyond being confused about where I am, fog isn’t going to be my friend in Maine as my radar isn’t functioning for some reason.  I had tested it a few times over the last month to be sure that all was in order, and it was, but yesterday as I was going through systems, yet again, the radar turned on normally but then mysteriously shut off.

I restarted the plotter/radar a few times, hoping that it was just a glitch, but the same thing happened after a few moments, first it worked and then it didn’t.  Nothing has changed but it seems that after being on the hard and decommissioned for months, Pandora is having a bit of difficulty in waking up again as well.   I did have the plotter serviced to upgrade the backlighting so perhaps something is wrong with the settings.  I expect that is wishful thinking but one can always hope.  I guess I will call the manufacturer today and see what they have to say.

The good news is that most systems are working fine, well if you don’t include the thruster which is also on the fritz.  Sadly, the repair guy seems to be ignoring me and hasn’t been returning my calls.

However, given how complex Pandora is, I suppose that I should be thankful that at least she is “mostly” working.  Mostly might not seem like good enough when I find myself in pea soup fog when we are in Maine, or on a lee dock with the wind blowing and no functioning bow thruster.

Newport is my first stop of the season as I am joining up with the Salty Dawg Rally to Maine and as of today, most of the fleet is in Newport as well. There are a few stragglers still underway and there are also a number of other equipment “issues” in the fleet.

One boat ran out of fuel off of Pt Judith and needed to be towed in and another couldn’t get their engine started earlier in their run.  Fortunately, it seems that that problem was solved with a sharp rap on the engine solenoid that got things back in order.

Here’s a screen shot including most of the boats and their tracks as of this morning.   By way of orientation, Newport is up at the top of the image, where most boat tracks end. 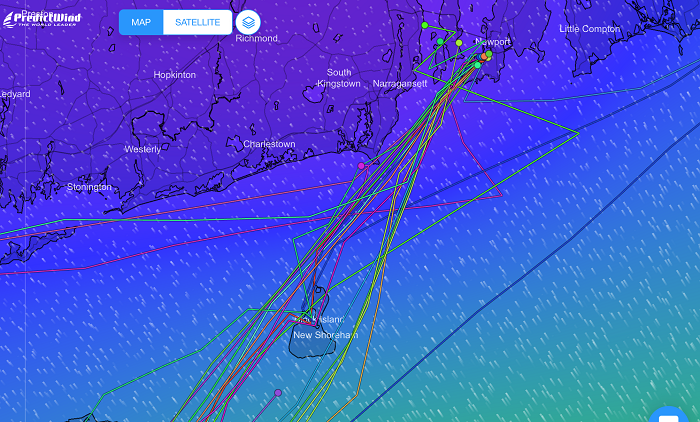 And, here is Pandora, in Newport Harbor, in the thick of it. 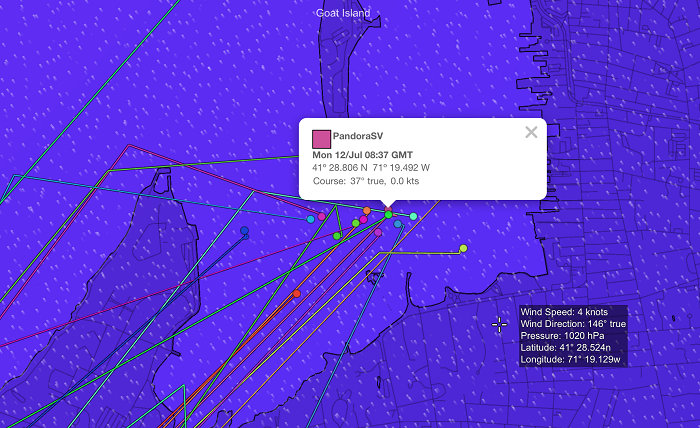 We will be here in Newport for a few days before heading to Cuttyhunk for a lobster dinner, on to Mattapoisett, through the Cape Cod Canal and on to Maine.

I have to say that it is good to be back aboard and I am looking forward to being in Maine, I think my 16th visit.  However, if I can’t figure out what is wrong with my radar, it’s going to be a bit more stressful as it will be my first sans-radar.

Hopefully in the next few days I won’t wake up in a fog, confused about where I am and nothing else on Pandora will stop working.   Given all of the systems aboard Pandora, I guess it’s safe to day that she’s at least at 90% and so am I.

I guess that’s about all for now from aboard Pandora in the fog.   Oh yeah, one more thing, it’s raining.

As they say, “into every life a bit of rain must fall”.  Let’s just hope that the heavens don’t decide to open up and dump on the fleet.

It’s good to be back aboard.

And one more thing, if you are interested in following the fleet as we make our way to Maine, check out this Predict Wind fleet tracking link.

One response to “Finally, back on the water but I’m a bit foggy.”